Our new baby daughter arrived late on Sunday, January 29, 2006 - at 9:26 PM. She weighed in at 7 lbs. 8 oz. and was 19 3/4 in. long. Needless to say, that day was a strenuous one. Katherine started feeling contractions as early as Saturday evening but nothing was too strong at the time. She started feeling contractions consistently around 2:30 Sunday morning and then woke me up around 4 AM and we waited as the contractions grew stronger and closer together. So at around 7:15 AM we called the doctor's emergency number and within a few minutes, one of our doctors from the Tepeyac Family Center, Dr. Fisk, called and told us to head to the hospital. So we packed up the car and left around 7:25 AM. We got the hospital around 7:55 AM and got through registration and finally into the labor and delivery area around 8:10 AM. After some initial observations by one of the labor and delivery nurses, she confirmed that Katherine was in labor so we headed over to a labor and delivery room. Katherine got hooked up to some equpiment, got an IV drip, and tried to relax in bed. I must admit, Katherine did not like the IV in her arm at all!!!!

Dr. Fisk dropped by and examined Katherine and confirmed what the nurse had said. So we waited and waited and waited....the contractions were coming along.... Around 12 PM, Dr. Fisk dropped by and said that labor had not progressed very far and he wasn't going to send us home either because Katherine was still in labor. So, he suggested that he break the water and then suggested that Katherine do some walking around to help stimulate contractions. At around 2:00 PM, Dr. Fisk returned to check up on our progress. The contractions still did not come along as he expected. Soon after he left, things got very hectic. Apparently the baby's external monitoring device started recording the baby's heart rate dropping. Several nurses rushed in and began giving Katherine oxygen, then started moving Katherine - getting her to lay on her side and then rotate to the other side. The baby's heart rate was non-recordable for a small period of time. After this, the nurses decide to insert an internal fetal monitoring device that would be attached to the baby's head so as to get a better read of the heart rate. After a few minutes of hectic action, it turned out that the baby's heart rate was fine. The nurses suggested that such occurrences were common because sometimes the baby shifts in the womb and puts pressure on the umbilical cord - thus causing the heart rate to drop. Both Katherine and I were scared to say the least during this short but strenuous period.

Over the next hour and a half, Katherine began feeling really tired from lack of sleep and the contractions were getting stronger. She then asked the nurse to tell Dr. Fisk, whenever he comes back, that Katherine wanted an epidural. The exhaustion from lack of sleep combined with the stronger contractions had taken a significant physical and emotional toll on Katherine. Within the next hour, the anethesiologist dropped by and administered an epidural. It provided some relief for Katherine. Not too long after Katherine began to feel comfortable, Dr. Fisk recommended that we move labor along via a labor inducing drug called pitocin. This would help get the contractions closer together as well as stronger. If the contractions did not do this, Dr. Fisk would have to do a C-section to get the baby out, which is the last thing Katherine and I wanted. So a pitocin drip was started.

Over the next few hours, Katherine was confined to the bed because of the epidural and she indeed even dozed off for a short bit of time here and there. The epidural turned out to be a good thing so that she could gain some rest for the delivery part. Also, the contractions began getting stronger and closer together. By 8:15 PM, Dr. Fisk came in to examine her and it turned out that the pitocin was doing its job well. The contractions were very close and Katherine was dialated completely. He told the nurse to wait another fifteen minutes and then come back to get Katherine pushing for the delivery part. Around 8:35 PM, the nurse and I started helping Katherine with her pushing. She would do three pushes during the waves of contractions and then rest with some oxygen. At around 9:15 PM, the baby's head was close to crowning and Dr. Fisk arrived to help with the remaining portion of the delivery. By 9:26 PM, the first part of delivery was finished and we then knew we had a beautiful daughter.

Our daughter was quickly put on Katherine's chest for a few minutes and then taken to the baby station for further cleaning and examination. For those interested, our daughter scored a 9 and 9 on the Apgar test.

I stayed with Katherine while the placenta was delivered and soon afterward, I was taking the first pictures of the baby under the heating lamp while Katherine was getting cleaned up. Shortly after the baby was swaddled and put into my arms, Katherine and I decided to name her Cecilia Bernadette. We waited in the labor and delivery room for the next few hours until Katherine could get up and walk around. Around 12:30 AM, we were able to be transferred over to the Post-Partum area and Katherine then got back into bed to rest. The baby got her first bath during the early morning hours. I waited until Katherine got settled in and then returned to the apartment to take care of the cat and get a few hours of sleep. Our baby finally arrived. Our beautiful daughter, Cecilia Bernadette. 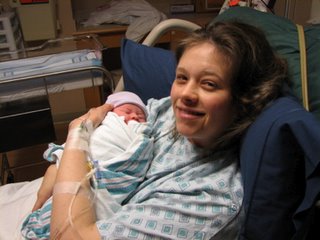 Posted by Katherine at 2:45 PM