This evening my parish is having Eucharistic Adoration. Isn't that wonderful! Our pastor is very good at encouraging parishioners to come adore our Lord in this special way. Of course, with three small children, it is not very easy for us to attend, especially in the evening. It begins at 6pm and ends at 9pm, but hopefully one day we'll be able to go.


I realize with gratitude that I was helped by the prayers of many a generous soul, often unknown to me, who brought me to the moment of ordination.

It is impossible to know the value and merit of prayer but as nothing is impossible for God, it stands to reason that a prayer makes anything possible. Take the example of the town of Lu in Italy. The little village of Lu, northern Italy, with only a few thousand inhabitants, is in a rural area 90 kilometers east of Turin. It would still be unknown to this day if, in the year 1881, the family mothers of Lu had not made a decision that had “serious consequences”. The deepest desire of many of these mothers was for one of their sons to become a priest or for a daughter to place her life completely in God’s service. Under the direction of their parish priest, Msgr. Alessandro Canora, they gathered every Tuesday for adoration of the Blessed Sacrament, asking the Lord for vocations. They received Holy Communion on the first Sunday of every month with the same intention. After Mass, all the mothers prayed a particular prayer together imploring for vocations to the priesthood.


Through the trusting prayer of these mothers and the openness of the other parents, an atmosphere of deep joy and Christian piety developed in the families, making it much easier for the children to recognize their vocations. Did the Lord not say, “Many are called, but few are chosen” (Mt 22:14)? In other words, many are called, but only a few respond to that call. No one expected that God would hear the prayers of these mothers in such an astounding way. From the tiny village of Lu came 323 vocations!: 152 priests (diocesan and religious), and 171 nuns belonging to 41 different congregations.
Every ten years, the priests and sisters born in Lu come together from all around the world. Fr. Mario Meda, the long-serving parish priest of Lu, explained that this reunion is a true celebration, a feast of thanksgiving to God who has done such great things for Lu. 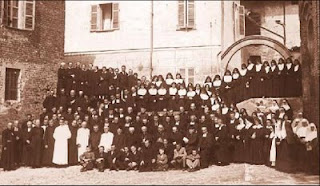 The prayer that the mothers of Lu prayed was short, simple, and deep:

“O God, grant that one of my sons may become a priest!

I myself want to live as a good Christian

and want to guide my children always to do what is right,

so that I may receive the grace, O God, to be allowed to give you a holy priest! Amen