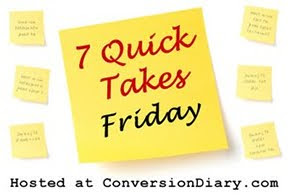 It has been a while since I did a Quick Takes. We've gotten some new stuff around here in the last month that I'm excited about and so, a la Sound of Music, this is the Brown Paper Packages Edition. 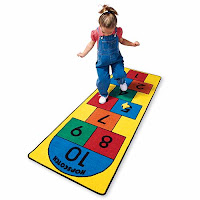 For a baptism anniversary present, Cecilia got this indoor hopscotch mat. It came with two beanbags, so the girls play on it together. Cecilia often likes using chalk on our deck to play hopscotch, but April kept our deck soaked and she couldn't get out much. So this seemed like a fun way for her to get some physical activity inside. 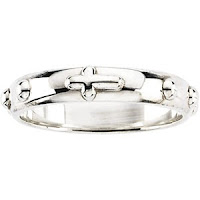 ~~~~~~~2~~~~~~~
In addition to my new domain name, for Mother's Day, James bought me a rosary ring. I've been trying to pray the rosary or the chaplet of divine mercy more but without a physical rosary in my hand, I'd get distracted so easily and lose my place. But a rosary in hand is a temptation for little hands to play. So I was excited to find this. The cross is for the Our Fathers and the bumps are for the Hail Marys. 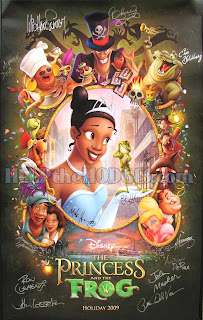 We contributed by winning a poster of Disney's The Princess and the Frog signed by all the animators including John Lasseter. We finally got a frame for it. I still don't know where we will hang it yet.

~~~~~~~4~~~~~~~
I've been wanting to get a nice statue of Mary for our kitchen. James bought me this beautiful Our Lady of Fatima. Isn't she beautiful? Sorry the picture came out a bit dark. As my word for the year is Mary and, more specifically, queenship, I thought this was a particularly appropriate statue of Mary to smile back at me in the kitchen. 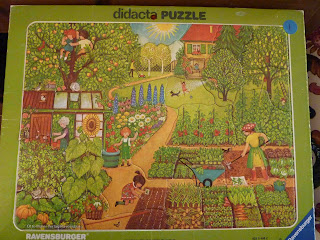 A friend of mine who has been homeschooling for about 20 years now had a homeschooling curriculum sale in her yard. She asked other homeschoolers, if they had any curriculum books or things they wanted to sell, they could join her. Of course I went and of course I didn't come home empty handed. Felicity found this treasure for a single dollar. It is a Ravensburger didacta puzzle in very good condition. It is not new as it says it was made in West Germany but it is so beautiful. Felicity is quite the puzzle-phile and this puzzle has been a wonderful new challenge for her. 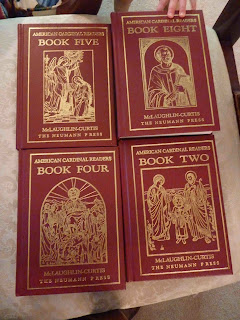 Another find were four volumes of the American Cardinal Readers. Volumes two, four, five and eight were all hardcover and in excellent condition and only $2 a piece. I actually already have volume one, so it was a nice addition to the collection. 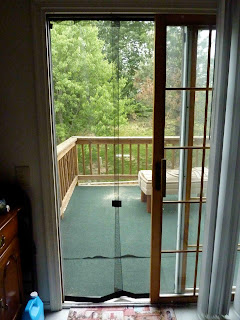 Well, as the warm weather has returned and the girls are spending a lot of time outside on the deck, I took special notice when I spotted an attachable screen at One Step Ahead. Last year we killed I don't know how many flies that got in the house and even had a few stingers get in as well. I can't completely close the door because Felicity has trouble opening it and if the girls should need to get in quickly for any reason, I want them to be able to. Likewise the girls have a hard time remembering to almost close the door. So we bought and installed a Bug Off Instant Screen and it has worked better than we had hoped. It doesn't align perfectly at the bottom but we haven't had a single bug get in yet. The girls have no problem going in and out and the magnets close the screen behind the girls.
I look forward to hearing any comments or questions on any of these. I don't usually post on things, but it has been a while since I did a Quick Takes and I actually had enough for my first special edition!

Read more Quick Takes at Jen's Conversion Diary.
Posted by Katherine at 6:53 AM