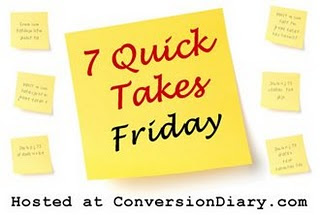 ~~~~~~~1~~~~~~~
Our parish offers a babysitting service for small children, I think up through kindergarten. Personally I've always believed children of every age should attend Mass with their family. No, it isn't always easy with little ones, but they learn that going to Mass is for prayer and not play. Cecilia and Felicity are generally very well behaved during Mass but last weekend I discovered another reason it is good to bring children to Mass. Simply by attending, Cecilia has learned all the responses of the Mass including, at least part if not all, the Confiteor and even at least part of the Gloria in Latin. When I began singing the Gloria in Latin to her and blanked at one part, she continued for me. I'm so thankful to our parish for singing the Gloria in Latin but these are not things I've made a point of teaching her. She has just learned them from hearing them and she hears them at Mass.
~~~~~~~2~~~~~~~ 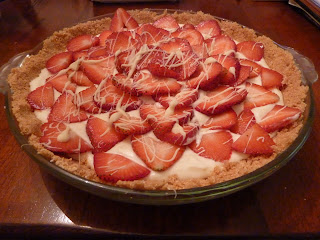 For Pentecost I wanted to make a strawberry cheesecake. Unfortunately my spring-form pans are packed and I'm not unpacking them when I have so much I still need to pack. So I made a White Chocolate Berry Pie instead. It turned out pretty well. H/T to Barbara for this beauty.
~~~~~~~3~~~~~~~ 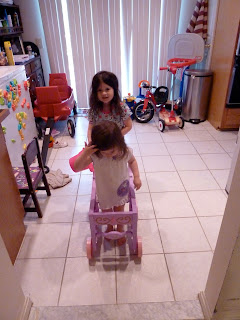 Felicity has really been into Alice in Wonderland. She runs around the house chasing "the bunny." She hasn't yet caught that White Rabbit, but she keeps trying.

Elizabeth has been scared of taking baths. I would even get in the tub with her but she clung to me like a cat being dipped in a pool. Until Cecilia got in the tub with her. Then it took only a little time before Elizabeth sat down and the two of them spent 15 minutes playing together. Elizabeth loved it. She still hasn't learned what "No splashing," means, but now she can't wait to get in the tub. Go Cecilia!

Well, we signed the lease on our new home and delivered it with the first month's rent deposit. Looks like we are all set. Now just to hire a moving company and pack up.

Cecilia keeps requesting to listen to the music from the Disney Main Street Electrical Light Parade on repeat. She then keeps lamenting she wants to go to Disney World. Perhaps it is best we don't have a Disney trip scheduled for a while as it may take me until 2011 to get the parade music out of my head. LOL.

More Quick Takes at Jen's Conversion Diary
Posted by Katherine at 8:35 AM