The Week Without James, Part 2

I didn't think the power would stay off too long. I'd been through hurricanes and had no power for days but this wasn't a hurricane, it was a 30 minute storm. But that didn't take into account two things: the area we live in has the 3rd largest canopy cover of trees in the country, which, for the most part, are grossly neglected in terms of properly being trimmed. Second, our electric company, Pepco, is notorious for miscommunication (they told one woman on Sunday her power would be restored by September 10th!), constant outages, and general inefficiency.

Going to bed Sunday night, I figured the power would probably come back on sometime during the night so I tried to keep the girls' routine as consistent as possible. Their baths were a quick jump in, get washed, get out, but then pajamas, brushing/flossing of teeth, and bedtime books were the same. Elizabeth had also begun teething again - 1 bottom incisor and 2 upper canines - so I gave her some Motrin and got all the girls asleep.

By 12:45, Elizabeth was awake again crying and soaked in sweat. I tried walking her, blowing on her, putting cold water on her head, arms and legs, all to no avail. She would try to lay down on me, but she was so hot, it was no use. By 2am, Cecilia came in my room half asleep just saying, "Mommy, I'm hot. Mommy, I'm hot."

Out of any better ideas, I grabbed any necessities, and took Cecilia and Elizabeth downstairs to try to get them back asleep in the living room, which was 5 to 10 degrees cooler than the upstairs. By 2:45, they were both asleep.

We spent Monday at a very kind friend's house, which had electricity, and drove around in the air conditioned car while I charged my Iphone and Ipod. The afternoon we spent cooling in the pool and we met my dad at Red Robin for dinner. 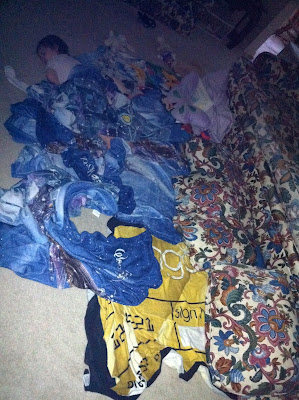 Monday night I decided there was no point in trying to keep the routine the same. The circumstances were clearly different and it would have been foolish of me to pretend they weren't. So, I had the girls grab their pillows and stuffed animals from their beds and make "beds" on the living room floor. I got the battery-operated portable dvd player from upstairs, opened the sliding door so fresh air could circulate through the screen, and all four of us girls camped out.

Tuesday morning, at 6:53, the power came back on. I made the girls leftover pancakes and we finished the opened carton of orange juice. I harvested my rye on Farmville and then, around 7:45, the power went out again. I figured they were just tinkering and it would be back on again soon. After all, 39 1/2 hours without power for a 30 minute storm was more than enough. 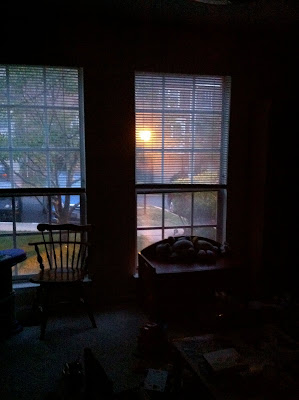 So we went out in the car again for the air conditioning for Elizabeth's naps and to charge my Iphone and Ipod. We met my dad at Ruby Tuesdays for lunch and then walked around the Columbia Mall and ordered pizza for dinner.

Tuesday afternoon, Pepco told us our address would have power again by 11:30pm on Wednesday. The afternoon was exciting with an ant invasion in our playroom. I had to shake them off all the play food (ants must be incredibly stupid creatures) and off the girls bookcase, then find where they were coming in from the outside and spray their nest.

By Tuesday night we began to feel Pepco was mocking us as it became obvious that not only did our neighbors to the East, neighbors to the West, and the houses across the street had power, but even the street lamp in front of our house was working, but we remained sweaty in the dark.

Wednesday morning came and still no power. After driving for Elizabeth's nap, I took the girls to Chick Fila for lunch and some playground time. They loved it. After Felicity's driven nap, we went to a place called Color Me Mine where the girls picked figurines and got to paint them. They will be fired in the kiln and we can pick them up next week. 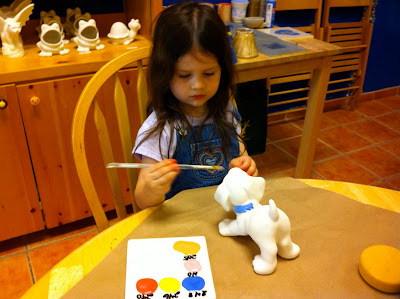 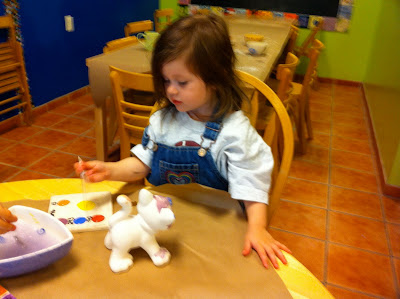 The girls loved it. Cecilia painted a puppy and Felicity picked a kitten. I painted a tile, but we'll see how it turns out before I post a picture of it. I was after all painting while holding a one year old. But it was a great experience. They were wonderful with the kids and very helpful to me as "I had my hands full." We drove Elizabeth to sleep and met my dad for dinner at Olive Garden.
The girls stayed up later than usual that night since they knew Daddy was coming home. James returned safely to a very *warm* welcome. Dared I hope the power would come on that night?
To the extent I did, it was in vain. Thursday morning it was already 78 degrees in the house when we woke up at 5:30am. James called Pepco and they told him power would not be restored until Friday. Such a response upset me, so I called them back. Figuring they had already heard from angry customers, I turned on the waterworks. I began crying at them how I have had a 4 year old, a 2 year old and a 1 year old sleeping on the floor for 3 days now. They apologized and said the power should be on that day. (Next time I will call sobbing 12 hours after the power goes off - it couldn't hurt!)
So, we began driving again for Elizabeth's morning nap and went to the Premium Outlets in Leesburg, Virginia. James needed dress shoes and the girls loved the rides. 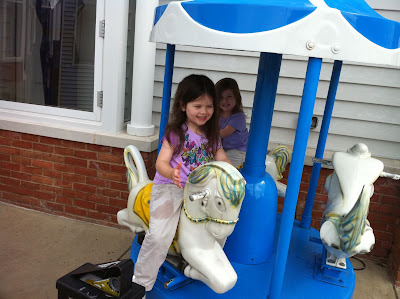 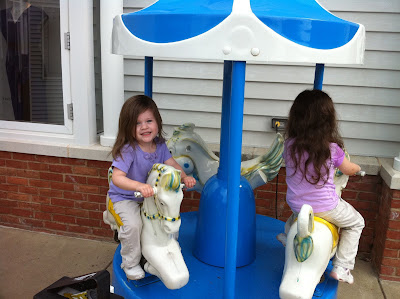 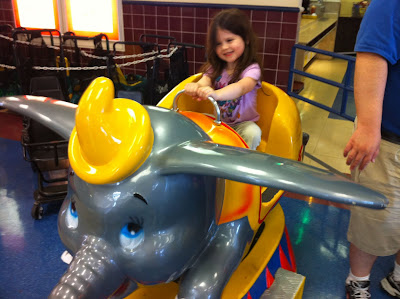 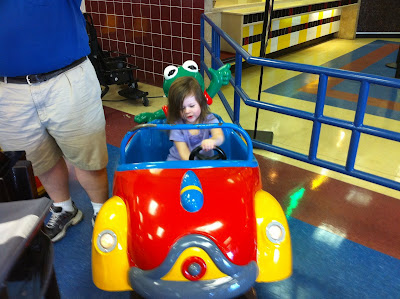 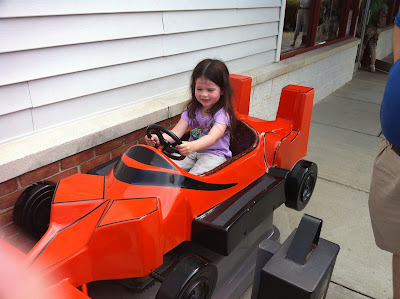 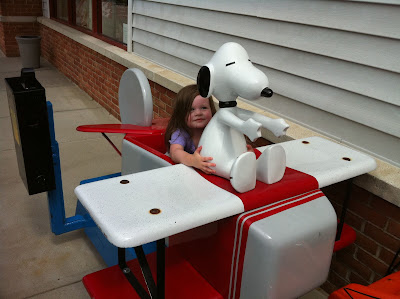 While at lunch at Fridays, I called the house. It went straight to voicemail: the power was still not on. On the way back, we got all the girls a nap on the way home. When we got back to the house at 1:45, the power had been restored. James checked the kitchen fridge and freezer. Everything was thawed, warm, and creating a right stink. Thanks be to God, almost everything in the freezer chest was still semi to completely frozen. I was going to cry if I had to throw out 3 roasts, 4 pork loins, several pounds of ground beef, several pounds of chicken breasts, bags of broccoli, fries, mixed vegetables, green beans, 3 quarts of homemade tomato sauce, 1 homemade lasagna, about 30 waffles, 2 boxes of mozzarella sticks, and about 75 homemade chocolate chip cookies.
By the time we had cleaned out our kitchen fridge and freezer though, they looked like this: 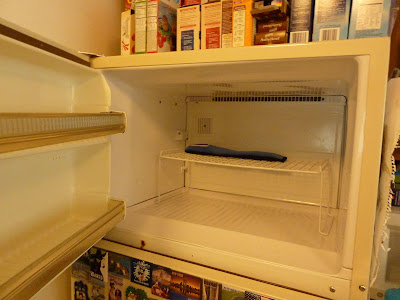 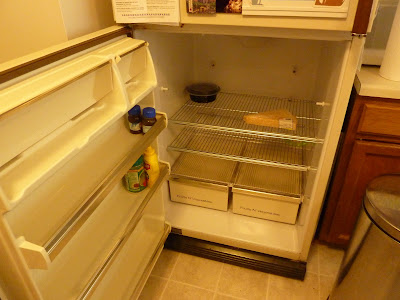 The remaining contents consisted of coffee grinds, parmesan cheese, mustard, and Gerber Apple Prune juice. Needless to say, food shopping was a priority today.
Now that the food shopping is done and all the ice trays and tupperware from the fridge/freezer washed and put away, I'm trying to catch up on the mountain of laundry that accrued.
Between almost 2 tanks of gas, all the groceries we lost, and all the meals we had to eat out, it has been an expensive week. So, I'm sorry my blog has been so silent, but between the move and the outage, well, this mommy has just been too busy and is thoroughly exhausted. I am very eager to say "Goodbye" to July and begin August.
Posted by Katherine at 4:36 PM