Saturday I took Felicity to her swimming lesson, then came home, polished the kitchen table and chairs, vacuumed and wiped the floor, and made the girls lunch. Then I took Cecilia to her swimming lesson. Once we got back, we all piled in the car and went to Germantown for Oktoberfest. We'd never been before but the girls took right to it. The bounce house was a hit, but mainly for Cecilia. Felicity didn't last too long, but Cecilia is my bouncy girl. I swear if she could she'd spend every waking moment on a trampoline. 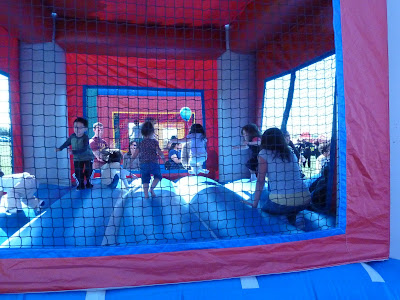 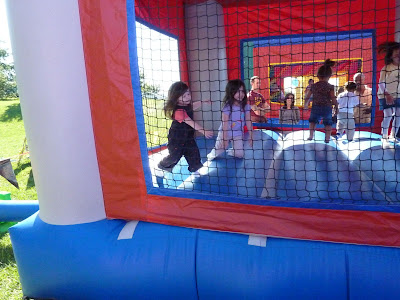 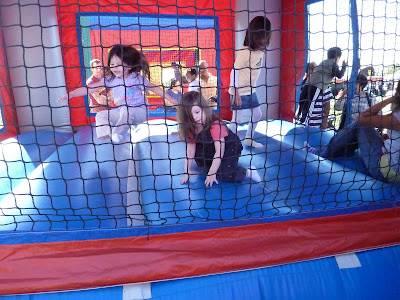 The super slide was definitely more up Felicity's alley but Cecilia had a blast on it too. 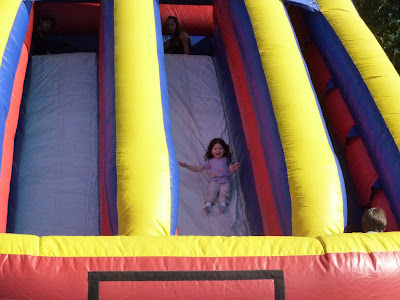 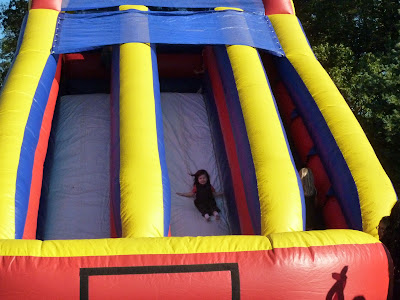 There was also a small ride. Felicity seemed to really enjoy it but Cecilia seemed to get bored. I guess compared to even Disney's Dumbo, it was maybe a bit young for Cecilia. 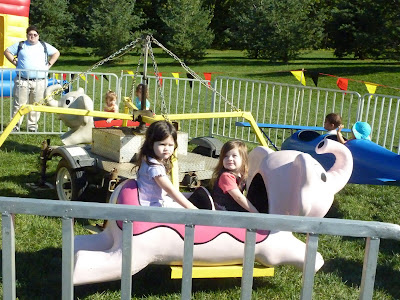 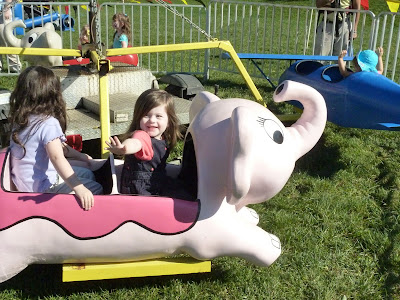 There was not enough chairs together for us to sit and have dinner, so we had to camp out on the grass. This wouldn't have been so bad if Elizabeth had been willing to stay put but between the car ride and the stroller she'd been strapped in, she wanted to roam and in every direction but where we were or were going. Nothing we tried to do did any good. That said, the fries were good but my burger was a joke. My dad loved the bratwurst though and James said the BBQ pork was quite good. We did head home after that as Elizabeth was becoming miserable and it was just too busy and difficult to let her wander at will.
Sunday we went to 11AM Mass, as usual, and then lunch, as usual. After lunch, we came home to get Elizabeth a much needed nap and for Cecilia and Felicity to change clothes. Our parish was having its annual Fall Festival and now that we live 5 minutes from it, it was too easy to go than not. James stayed home with Elizabeth while my dad and I took Cecilia and Felicity.
One great highlight was the Pony Ride. My girls had never been on a horse or pony before but both eagerly got on and enjoyed the ride. Felicity got to ride Fiona while Cecilia rode Peanut. 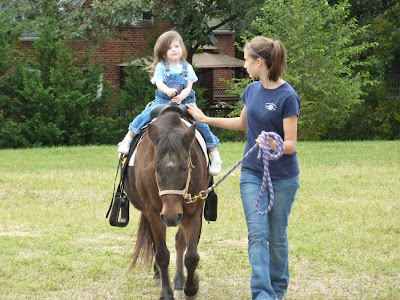 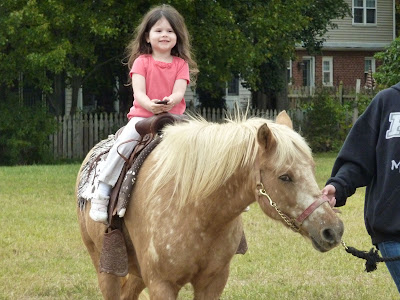 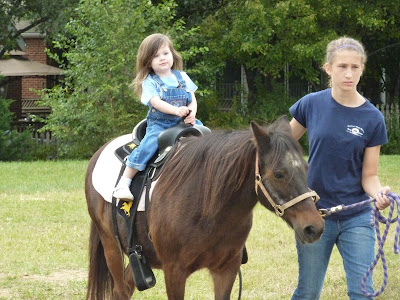 The Fall Festival also had a super slide. 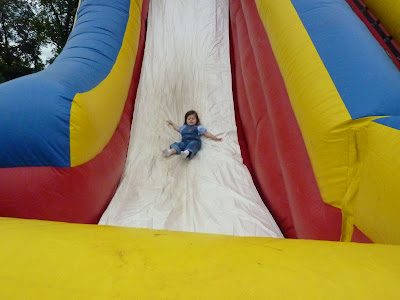 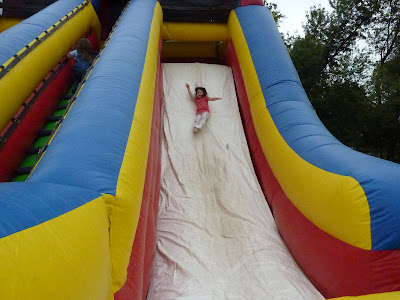 I asked the girls which super slide they thought was better. Both said it was Sunday's. Sunday's was wider and seemed longer as well, so that may have played into that answer.
Our local Boy Scout troop had built a rope bridge and Cecilia was determined to try it. She did amazing. 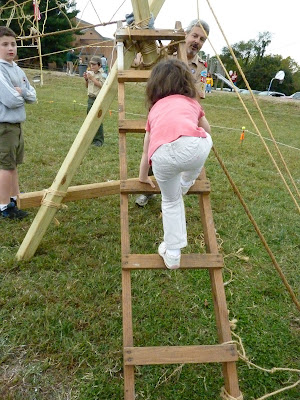 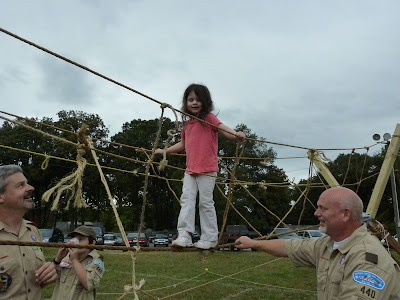 Of course, if Cecilia was going to do it, Felicity had to try. She got up it and a little ways across but got scared and came down. Pretty good try for a 2 year old though. 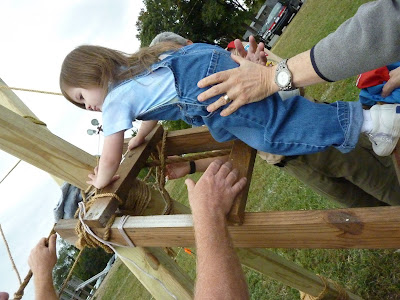 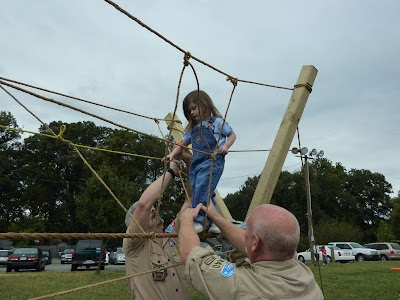 Cecilia then wanted to go on the bounce house but Felicity made a beeline for the playground. Grandpa went with Cecilia while I went with Felicity. 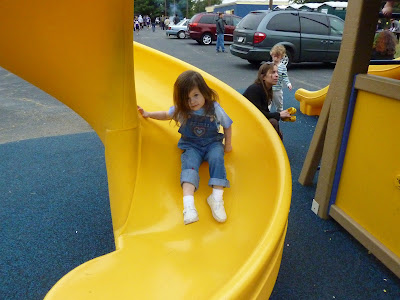 Eventually Cecilia joined her and they ran all over the playground for a bit. Then a significant number of older children came to play on it and they were not very conscious of the smaller ones, so we left. Cecilia said she wanted to go back in the bounce house but Felicity wanted another pony ride. So again Grandpa went with Cecilia and I took Felicity for her pony ride. This time she rode Patches. 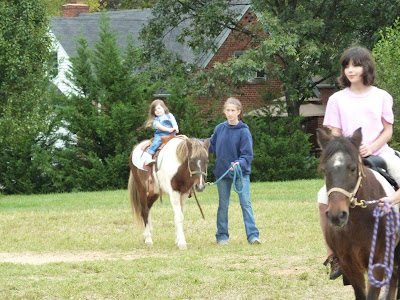 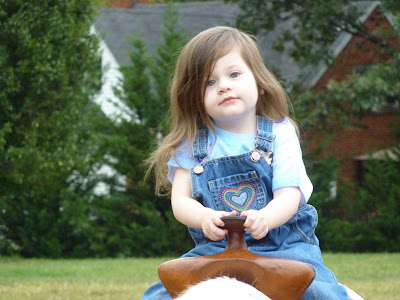 Cecilia was still in the bounce house, so Felicity went for another ride on the super slide. 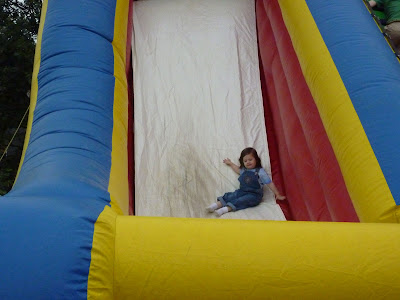 Cecilia finally convinced Felicity to go for a turn in the bounce house. The reason she agreed? The inside of the bounce house had a slide. (It also had an inflatable basketball hoop with basketballs.) It met both my girls in their preferences: Cecilia got to bounce, and Felicity got to slide. Wonder if those things come in smaller sizes? 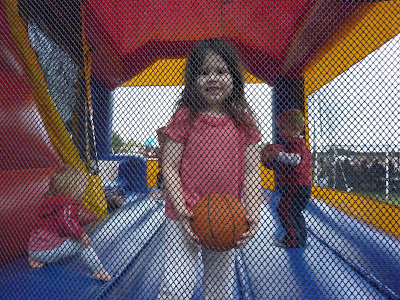 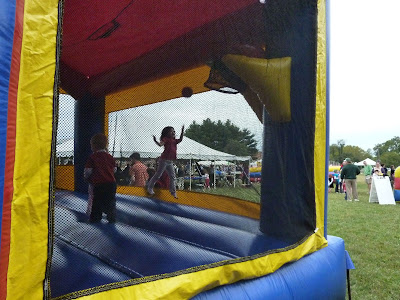 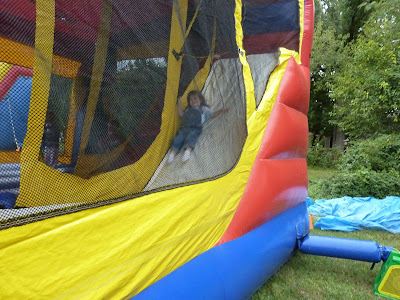 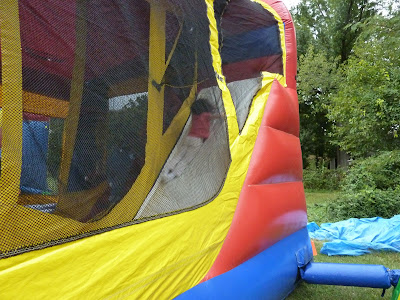 Afterwards, Cecilia was very upset the day was over. What she had once called "the best day ever" became "a bad bad day" because, like all days, it had to end. Mommy simply can only keep up so many hours.
It was a weekend of festivals and fun. Though I'm sorry our parish's bake sale was sold out before we got to it, everyone had a good time at both. Cecilia has already petitioned for a promise to come back to our parish's festival next year.
A good weekend, but I'm ready for bed. How was your weekend?
Posted by Katherine at 9:58 PM