Our Schedule: Week 2, Monday and Tuesday (with lots of pictures)

Well, I am glad that weekend is over. James was out of town at a conference. My dad was here and he was a huge help but I am the only one who could get the girls to sleep. Multiple times a night. Elizabeth is cutting her canines and the nights Elizabeth managed to sleep well Felicity was up. It got to the point that, even when no one was waking up, I was sleeping so lightly I was waking up just in sheer anticipation of someone waking up. 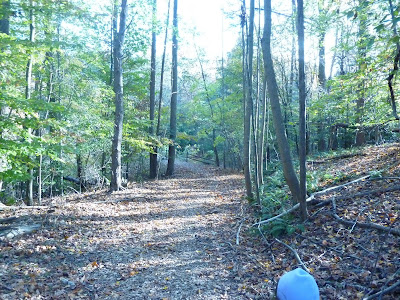 So, I was kindof dreading Monday. Fortunately, it didn't go half bad. Despite the night wakings, the girls all slept in (compared to their usual up at 6am!)  and I got a jump start on the laundry. After breakfast, I watched Mass on EWTN upstairs and down desperately searching for the box with all our winter gloves, mittens, hats and scarves. The low last night was 36 and the highs all week are in the low 50s. It was time to dig them out but, since moving in the summer, I didn't know where they'd wound up. After searching the entire basement, I found them upstairs in the girls' closet. Anyone know what this neat looking plant is? It's leaves even looked as though they would feel fuzzy if you touched them. 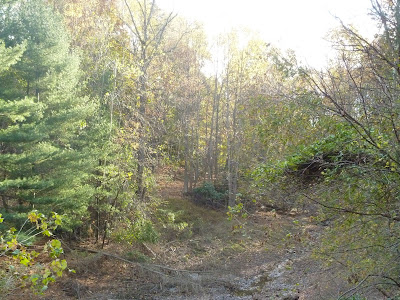 I had promised them a bit of a nature walk as I figured, given the chill in the air, it would be better for them to be moving out in the sun than relatively still on a shaded deck. Cecilia was so excited to head outside she didn't want to do school. So, again proving the flexibility of a schedule, we switched school and our outside time. 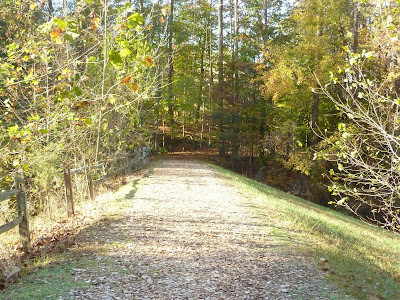 Elizabeth was forced into the stroller (how many do you think I can chase at once?!?) and Felicity voluntarily joined her. 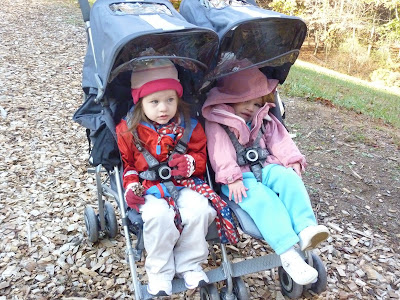 Cecilia excitedly picked up rocks and pine cones as we strolled the neighborhood. 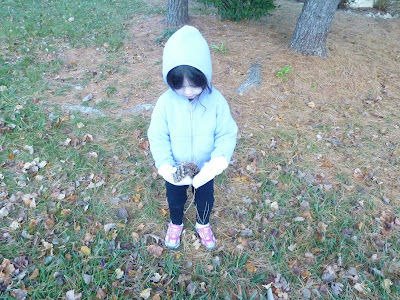 We even ventured into the wooded park behind our house and found a sort of bridge above some sort of dried-up waterway that seemed to have a beaver's dam in it. 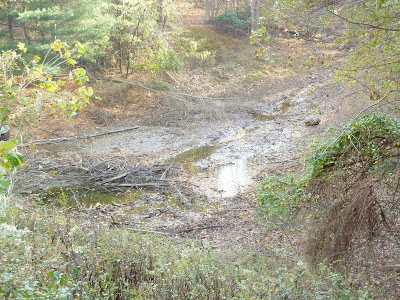 I promised Cecilia tomorrow or Wednesday (it is supposed to rain Thursday) that we would go to one spot where I have seen acorns before. 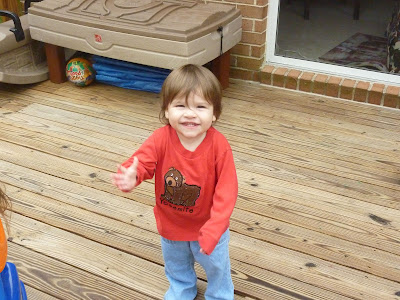 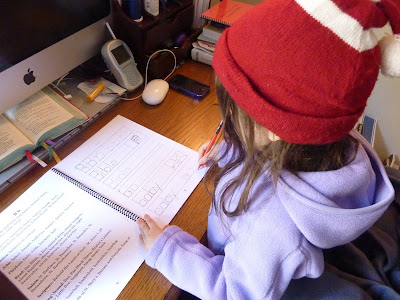 Upon returning home Cecilia practiced some writing, finished her science book, and did well through another reading lesson. While she was doing school, Elizabeth and Felicity ran around on the deck not having been able to move outside while in the stroller. After lunch and getting Elizabeth asleep, once again the girls didn't want me to read to them. It seems that while I'm getting Elizabeth asleep, they get wrapped up playing by themselves and my coming down to read them is like saying, "Okay, stop quietly playing among yourselves..." I'm thinking maybe "Mommy's Time" and "Reading Time" may need to flip flop. Sure enough, an hour later, both girls brought me books to read. 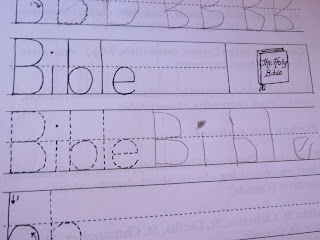 What fascinated me was that Cecilia, who couldn't have cared less about Genesis a week ago, brought me the Catholic Encyclopedia (by Our Sunday Visitor) and wanted me to read Scripture story after Scripture story. We did skip the creation story but we read about the fall, Noah, Abraham, David, and the Annunciation, Visitation, Visit of the Magi and the Flight to Egypt. She really wanted to read the Jesus stories. We would have read more but poor Felicity was sitting there begging me to read some Harold and the Purple Crayon so we did stop long enough to read 3 Harold stories. So, Melanie, it looks like you were right. It isn't the Scriptures Cecilia had no interest in, it was the type of book I was using. This one is, I think, geared a little younger with more pictures. 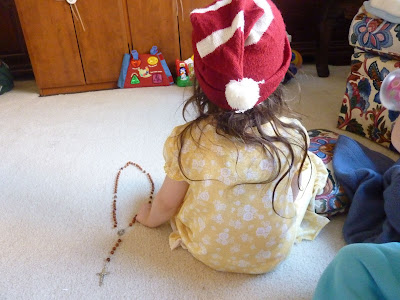 I've also learned one of the surest ways not to skip your prayers is to say a prayer with your kids they really like because even if you aren't "feeling like it" they will beg you to and how can you refuse to pray with your child? At 2:00, Cecilia began asking if it was "prayer time" yet. Even if I been considering ducking out, she wasn't. So, at 3:00, we put on EWTN and said the Chaplet together and this time even Felicity tried to say a little. 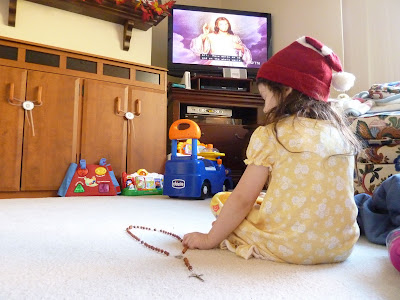 She was so excited to get out the winter hats, she wore it all day.

Tuesday did not start off well. I was up with Elizabeth from 12:15 until 1:10 primarily because she was cold, poor thing. I eventually got her back asleep with a blanket on her and then turned up the heat, but that missing hour proved a difficult hurdle in the morning. I began the day 30-40 minutes late and very sleepy. Starting late, while Morning Prayer fell by the wayside, at least Mass did not. 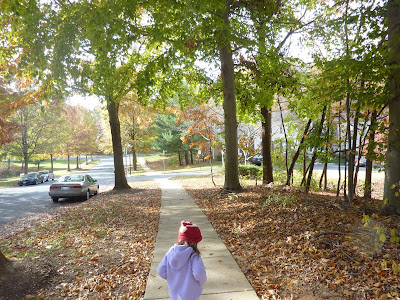 After Mass, Cecilia did some handwriting practice (I do see a little improvement) and did very well on her next reading lesson. As we were out of science or math books, she asked to stop then and asked if we could head outside as I promised to show her where she could find acorns. In hindsight, it was good we stopped after 35 minutes of schooling because it took us 25 minutes to get us all dressed and bundled to head out. It was, after all, 39 degrees at the time. 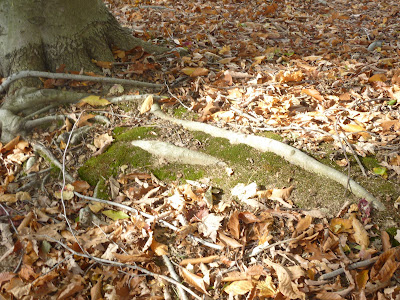 We walked down the street where I knew of several oak trees and had seen numerous acorns before. But not before stopping for some more pine cones. 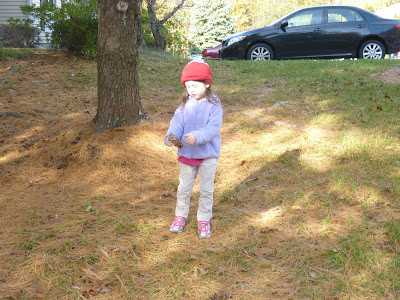 Elizabeth and Felicity rode in the stroller again while Cecilia collected. 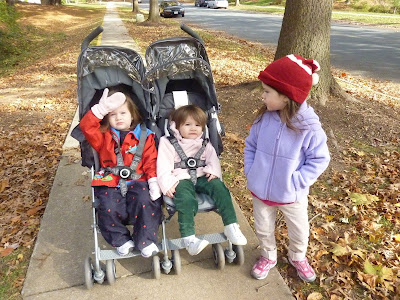 We finally found some. 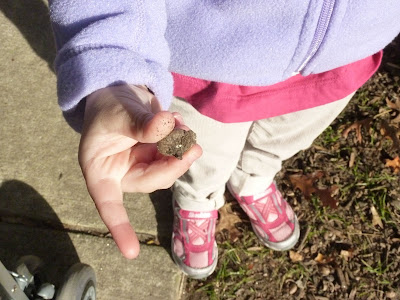 And then some more. 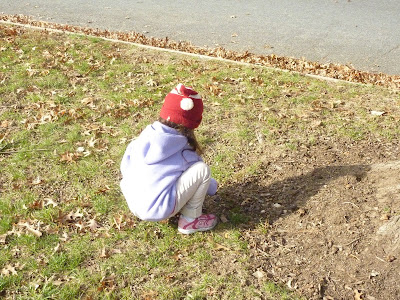 And then we hit the jackpot! 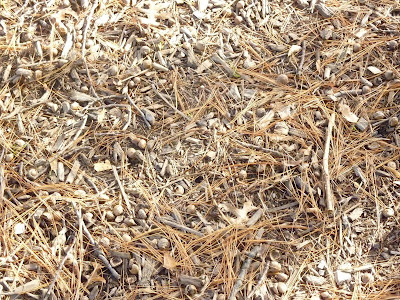 On the way back, Cecilia got very excited over a tree stump she found. 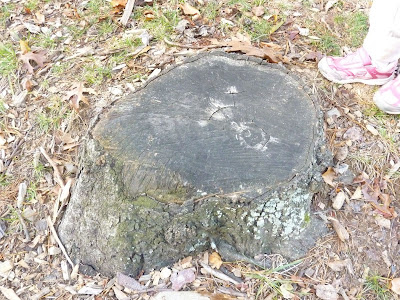 She insisted I take her picture on it. 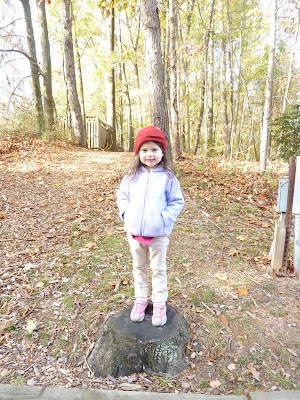 By the time we got home we had quite a bountiful crop of sticks, pinecones, acorns and a few rocks. 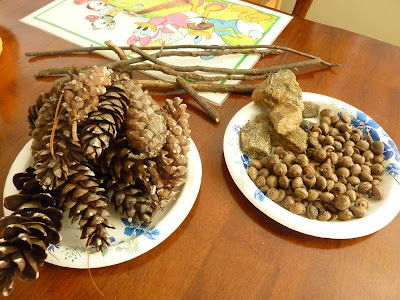 I have to admit though, by the time lunch was over and cleaned up and I had gotten Elizabeth asleep, the caffeine was gone and my energy depleted. I was tired. And then the doorbell rang. It was FedEx dropping off Cecilia's new math book. Can you guess what ensued? 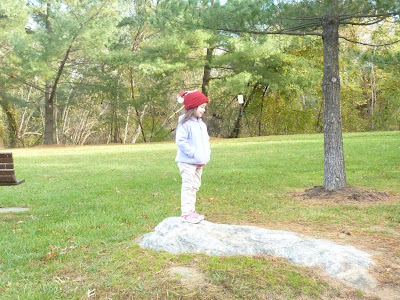 "Mama, can I do my math book? Can I do it now? But I want to do it! I want to do my schoolwork. I want to do math. Ohhhhhh, I'll never do schoolwork again!" Sound familiar to anyone besides me? I had just begun looking over the new math materials when both girls declared they wanted me to play blocks, which we did. We built a house for Piglet and Pooh. I told her she could begin her new math book tomorrow. 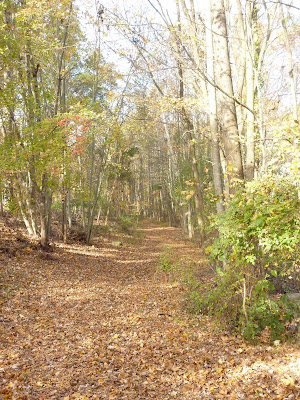 Tomorrow outside time will just be playing on the deck. The nature walks are nice, but Elizabeth, and by her own choice, Felicity just sit there the whole time as opposed to running around and playing like they do on the deck. Besides, we have enough acorns and pinecones for a little while at least. 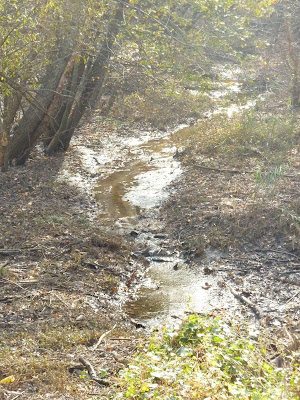 After prayer time, and a bit of play time, and clean-up time, I took Cecilia with me to vote. I couldn't believe how many people were lined up in front of the high school to tell me how to vote. Fortunately I had Cecilia with me to fend them off and we quickly walked inside. She asked what voting was. My dad had told her it is a game where you pick the good guys and try to beat the bad guys. My state is, as I call it, politically-challenged. The offices of attorney general, state senator, house of delegates, and sheriff for my area were all Democrats running unopposed. I don't care if you are liberal, conservative or otherwise. That is not democracy. Cecilia was surprised by how quick voting was. I tried to explain it as simply as I could. She got to watch me vote on the machine and was happy to get her "I voted" sticker. On the way out we did make a couple of women laugh when Cecilia asked me if I wanted to go to high school. I explained I went to high school a long time ago and won't be going again.
Overall, our Monday and Tuesday were more focused on science and a little bit of politics but I suspect with the new math books, we will be back to more math tomorrow.

Posted by Katherine at 9:23 PM