On Saturday, since it was Cecilia's birthday and she had been begging for months, we all went downtown to the National Museum of Natural History. Cecilia had read in a few books, like Curious George, about seeing dinosaur bones in a museum and really wanted to see some. So, of course, when we got there and asked what she wanted to see first, she said "Plants and Insects." So we went there first. They have a small butterfly pavillion where you can walk through with live butterflies fluttering all around you. I was terrified I'd step on one. I can't see so well directly beneath me anymore as this baby keeps getting bigger. Felicity loved seeing the butterflies but their ability to fly right near her or near her face made her a bit nervous. 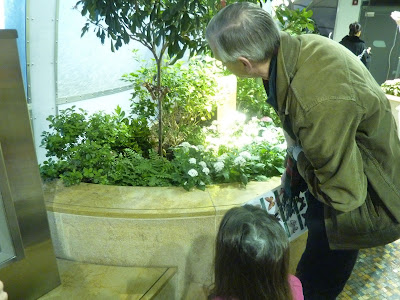 There was one moth, I believe it was a Hercules Moth that sat quietly with wings spread. It was quite large and couldn't help but capturing Cecilia's attention. Here is a close up: 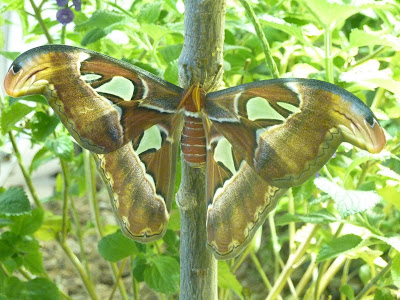 But the Hercules Moth, despite its size, could not compare with the Blue Morphos flying around. So beautiful. I had trouble getting a good shot of one, but this one held still for a bit: 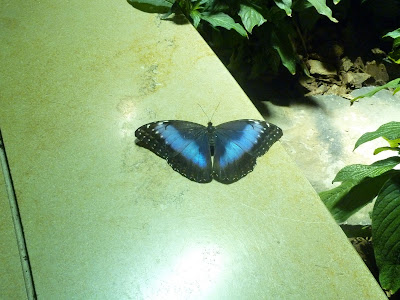 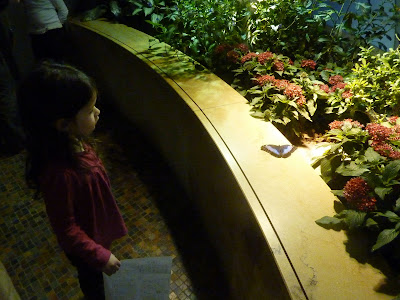 Just as we were about to leave, my dad was holding Felicity when we informed her that Grandpa had a new hair clip. She got a bit kick out of Grandpa's new hair accessory. 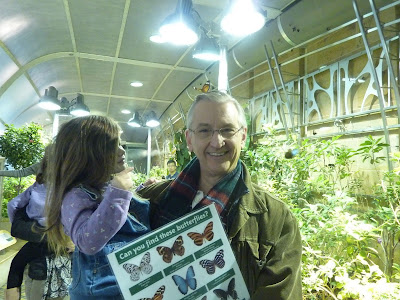 There was one exhibit on bones. I can't say it interested the girls much but when Felicity saw the skeletons, she asked me, "What happened to him?" I replied that, "He died and fell apart I guess." After that she went around to every skeleton, would point at it and say, "He died." 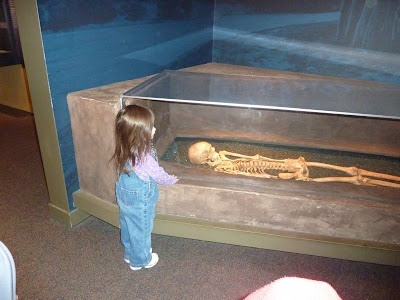 I hadn't even realized this museum had the Hope Diamond. I knew it was big, but I hadn't expected it to be blue. Afterwards James kept joking about how he was unimpressed and wanted to see the fabulous Baseball Diamond at the Mallory Gallory. (You must know your Muppet movies to get that one.) 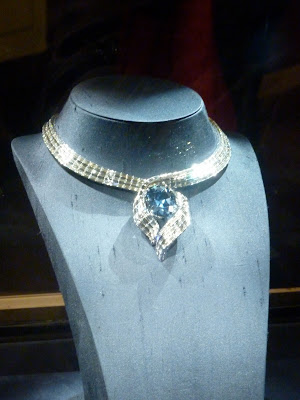 Felicity rather enjoyed the jewels. I picked her up to show her the emeralds and the sapphires. Every one she saw she said, "Mommy, I want to wear that." Yeah, guess which girl is my "girly-girl." 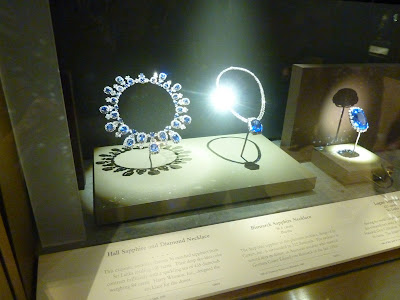 Fortunately the museum has some "Please Touch" exhibits like this massive chunk of Amethyst Quartz. 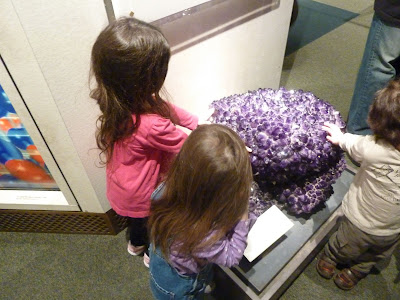 Elizabeth spent most of the visit in the stroller but was able to get out and roam through the Mammal Hall. 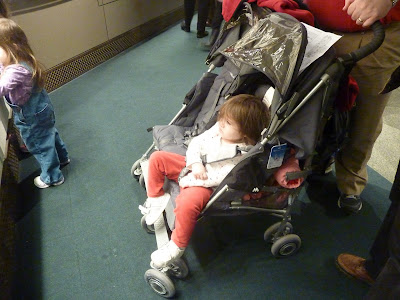 Finally we got to the dinosaur bones. Cecilia liked seeing those. Unfortunately it was a bit dark so I had trouble getting many good shots. 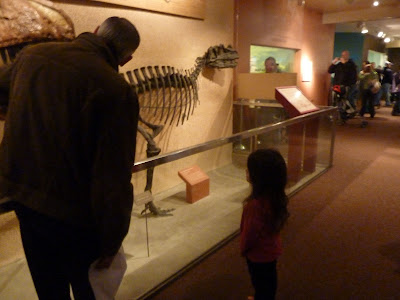 Elizabeth did enjoy roaming the Mammal part of the museum but don't think she was some prodigy taking it all in. She may seem like she is fascinated by the Rhino, but... 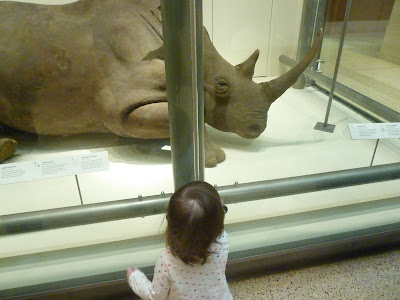 She is really interested in the bolts holding the exhibit together and wondering what happens when you press on them. 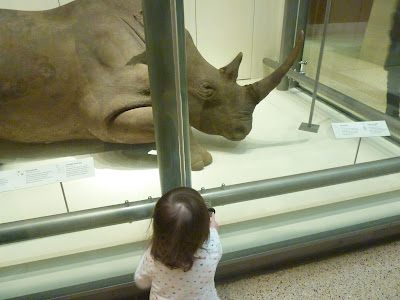 She was very curious about these giraffe bones though. She kept feeling them and looking at me to show me them. 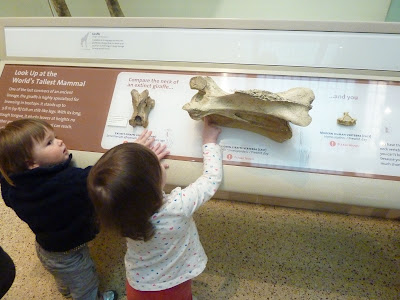 At least here, without bolts in the glass, she was interested in the zebra. (Can you tell who I spent the last part of our museum visit chasing?) 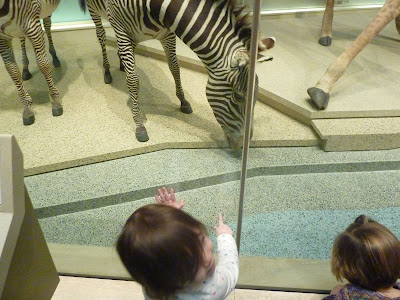 After 3 hours at the museum, we got Elizabeth a much needed nap in the car and drove to Cecilia's pick for a late lunch/early dinner - Red Robin. By the time we got home, everyone was pretty exhausted though Grandpa still put in 3 hours keeping up playing with Cecilia.

Sunday we went to Mass and then cleaned up for Cecilia's birthday party. James picked up her cake - as requested a cookie cake with balloons on it. After a friend of ours, endearingly nicknamed "Fr. Food," and Cecilia's Godparents and their adorable little munchkin arrived, we had the dinner of Cecilia's choice - 5 Guys, followed by cake. 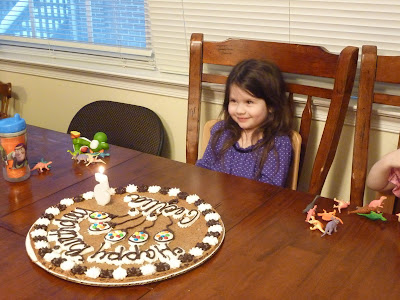 Then, of course, it was time to open presents. Elizabeth marched around blowing a party favor (saved from New Years). 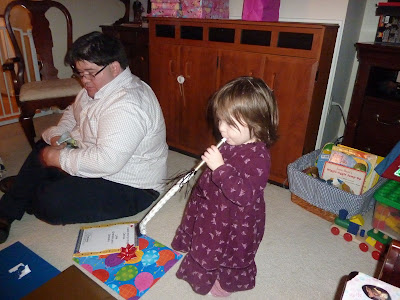 Cecilia got a number of wonderful books, including a children's dictionary. She had asked me how to tell whether a word was real or made up and I explained about the dictionary only to find the only one we had for children was a picture dictionary. Yeah, real useful for a child learning to read! So she was very curious about her new dictionary. 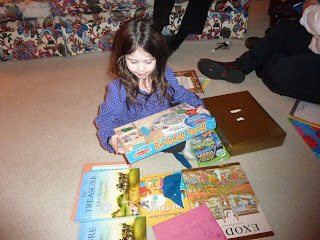 To add to our little kitchen, she also got a Melissa and Doug wooden Birthday Cake set and Cookie Set. 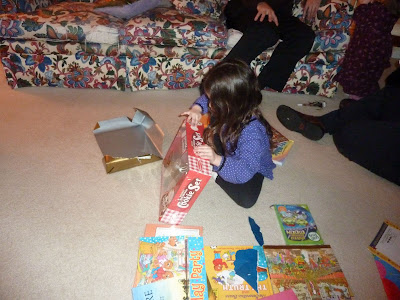 "Fr. Food" took a particular interest in the cookie set. Was Elizabeth worried he'd make off with it? 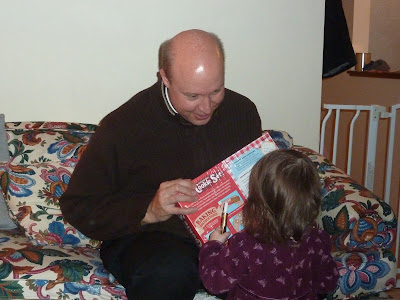 Our littlest guest.... so cute and growing up so quickly!!! 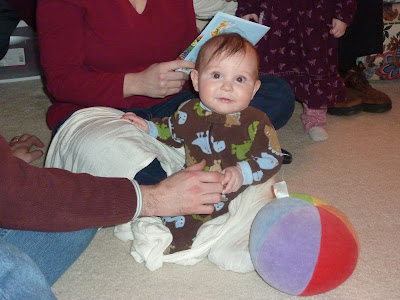 Elizabeth, always shy at first, took no time in warming up to everyone and by the time we'd finished cake she was very open to showing "Fr. Food" various toys and things. There was one birthday card Cecilia got that lit up and Elizabeth was mesmerized by it, so of course she took it to her new friend to show him. 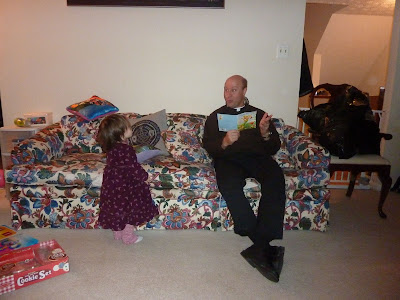 My brother got Cecilia a bulldog in a ballerina costume. Cecilia's initial reaction upon figuring out what it was, is captured here as she fell back laughing with her left hand smacked to her forehead. She declared it "So silly!" but has said she likes it. 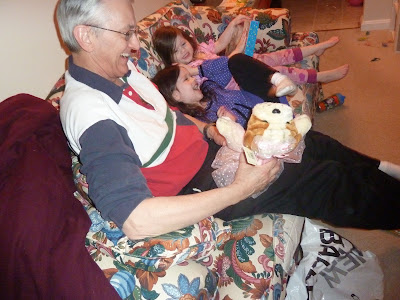 I'd also like my brother to see just what he did to his own father. Yes, my dad, tying the pink bow around the bulldog's neck. 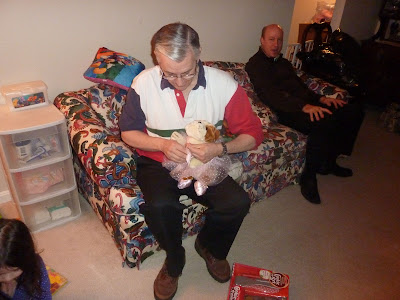 Elizabeth liked the wooden birthday cake. Grandpa helped her with the candles. 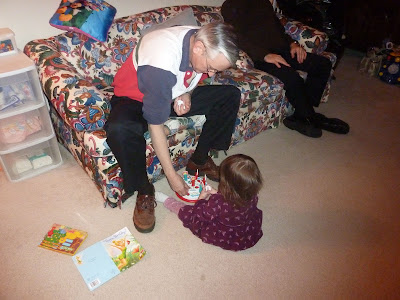 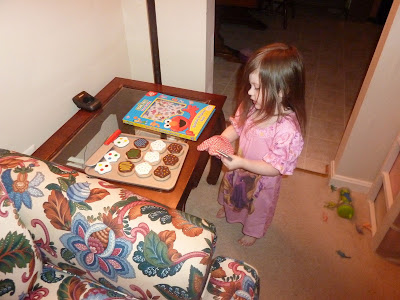 It was a very busy weekend, but I think everyone enjoyed themselves and Cecilia had a good time. November with Felicity's birthday, then Thanksgiving, then Christmas, then our anniversary and then Cecilia's birthday at the end of January always makes November through January very busy for us. In some sense, it sets me up for Lent nicely, although this Lent we will be welcoming our newest little one. So, on the one hand, I'm kindof looking forward to the quiet for a while, but, on the other hand, I still need to finish cleaning, de-cluttering and organizing before Baby #4 arrives. But that is for another day.
Posted by Katherine at 1:32 PM