Today is the beginning of a new year. ... of sorts.

For Catholics the new year began in November. Welcome back to the A Cycle!
For the Chinese, the new year will begin on February 3rd and we will begin the year of the Rabbit.
For Jews the year begins and ends in September.

The beginning of a new year is a bit arbitrary depending on which way you choose to view the year. I always had trouble myself viewing January 1st as anything other than the day after December 31st and an occasion for me to err in writing the date for a few months. As my husband points out though, there is something to the psychological recognition that an entire year has passed and a new year is beginning. The idea of a new beginning is very important to most people in our acceptance of letting go of the past and looking with hope to the future. Indeed, I admit, when it comes to beginning a schedule or a diet or some sort of lifestyle change, I much prefer to begin on a Monday as I view it as a beginning of the week just after a day of rest.

So, in one way, today is a new beginning. 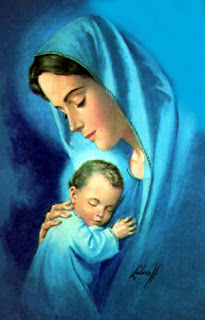 I know last year I chose a word for the year. I'm still reflecting on what such a word might be for this year, but fortunately there are no late fees.

Today is also the Solemnity of Mary, Mother of God. It was the 3rd Ecumenical Council held at Ephesus in 431 that formally affirmed Mary as the Mother of God, the Theotokos, the God-bearer. The importance of this declaration was to condemn Nestorianism which tried to divine Jesus into two distinct persons: the human who was Son of Mary and the divine who was not. So today, while in honor of Mary, is, even more so, a testament to Jesus as both completely and indivisibly human and divine. It is a feast in the joy of Mary's fiat as well as the celebration of the recognition that God became human so that the human might become divine.

It seems especially fitting then that these two fall on the same day. The world begins a new calendar year and the Church reminds us what we are to do with that year: that we might become divine as Mary has before us.

Today is one more thing for me. Today is my 6th wedding anniversary. It is a little mind-blowing to think that 4 pregnancies and 6 years ago I married my best friend. 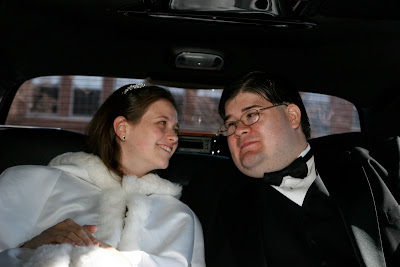 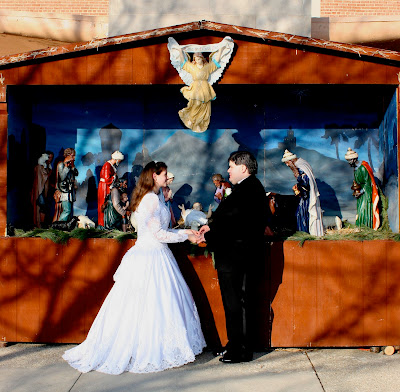 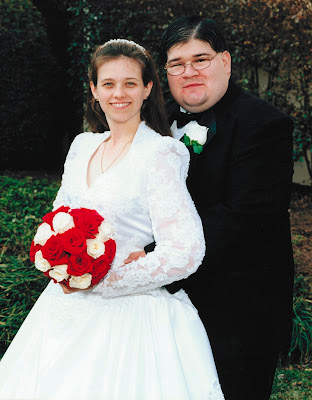 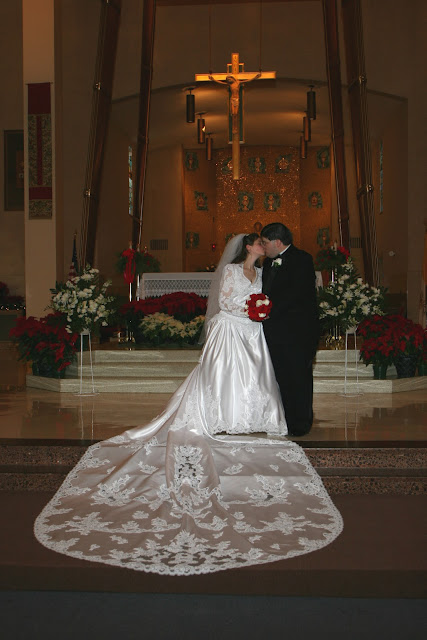 It has been 6 years since we exchanged vows and we have been immensely blessed with three wonderful girls and are anxiously anticipating the arrival of our newest family member, who will make his or her debut sometime during Lent.
For today, we are having cinnamon rolls for breakfast and then going to the Gaylord National ICE! display. We've never been before but as it includes a video on Dr. Seuss and several ice sculptures of How the Grinch Stole Christmas as well as an ice slide, I think the girls will enjoy it. I will have to post pictures later. Of course, to keep all that ice in good condition, the exhibit is in 8 degrees. I find it amusing that it is supposed to get up to 57 today (just like on our wedding day) and we will be going to 8 degrees, but we will definitely all be bundled well. 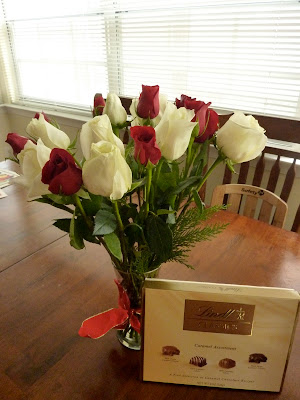 Knowing we'd be out a fair amount today and not knowing exactly how lunch will play out, we had our anniversary dinner last night. James bought filet mignons and made homemade bernaise sauce. We used the leftover mashed potatoes from Christmas and cooked up some broccoli. Yesterday James sent me a dozen and a half roses, red and white, just like my wedding bouquet. They are so beautiful and you could smell them all over the house. The girls took turns smelling them though after she smelled them Elizabeth kept trying to eat them. They smelled that good. We also made a trip to the Lindt chocolate store this week - best chocolate in the world. For a present, James replaced our household Holy Water font. I've been wanting a new one. I do very much like the one we have except for one thing: it holds about one ounce of water. I can fill it on Sunday and it will be dry in less than a week. It drives me nuts. The new one is gold with a beautiful crucifix above it, holds 4 ounces and was made in Italy. I can't wait to hang it!
Wishing everyone a very blessed Solemnity of Mary and a wonderful 2011 full of the Lord's blessings!
Posted by Katherine at 7:54 AM