We had planned to run out and do some errands on Saturday, but Elizabeth had been up from 3:45 until 5:15 earlier that morning keeping both James and I awake. I managed to go back to sleep but James never did. James also came down with a cold, toward which, I'm sure, the lack of sleep did not help. 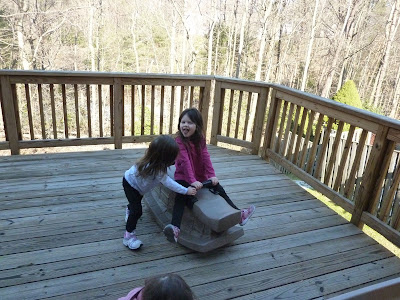 So what was going to be an errand day, became a stay-home, take-it-easy day. Sunday we went to Mass and then, per the girls' request, tried to go to Olive Garden for lunch, but we weren't going to wait 45 minutes for a table and so went nearby to Don Pablo's. It was not a good experience. I've never had such bland beans (all of Texas should protest!), my enchiladas had so little in them they were about as flat as crepes, and the "seasoned fries" didn't even have so much as salt on them no less seasoning. We won't be going back. We played some Mario on the Wii and watched Duke beat Miami. Go Blue Devils!

Monday I already gave a detailed description on in the previous post, so I won't bore you with a recap here. 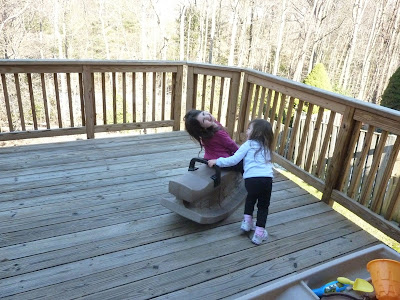 Tuesday the girls slept past 6! Unfortunately, it was only about 10 minutes past 6 and I accidentally woke up Elizabeth shortly thereafter. She was sleeping with her head past the guard rail right on the edge of the bed. I was trying to move a chair behind her to keep her from rolling off when the chair hit the bed and, ... well, there went that.

Cecilia did very well on Lesson #59 and completed almost 2 more math pages. After Monday, she begged to go outside but in 24 hours the temperatures had dropped over 25 degrees. Felicity refused to go out and Cecilia didn't last long. She was very disappointed.

Fortunately, by Wednesday, it had warmed up enough for everyone to go outside, after Lesson #60 and a math page, of course. I pulled out some chalk and they had fun writing and coloring on the deck. It would have been a nice break for me if Elizabeth hadn't kept throwing things off the deck. She has recently begun to really need to be reminded to not throw things and to not hit anyone. She also figured out how to push a small table to the railing and climb on top of it. My monkey. Table is now kept upside down. I spent a fair amount of Wednesday with, I believe, a fair amount of Braxton-Hicks contractions. Of course, this means absolutely nothing except that, while not in pain, I was uncomfortable and really appreciated it if the girls would have let me just sit for a while and rest but that wasn't how the day went. 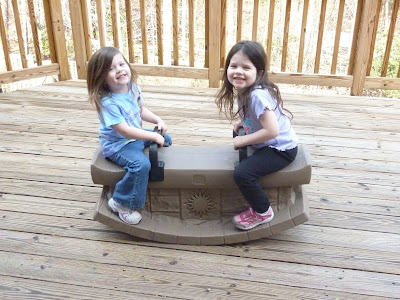 Thursday got off to a bit of a bang when a jar of honey fell on to a glass filled with water and blue food coloring we were using for a science experiment. Blue dye, honey and shattered glass all over the counter and running left and down and splattered right. Elizabeth kindly handed me the largest piece of broken glass (Geez!) before I ushered everyone from the room. It took me about a half hour to scrub up all the honey, scrounge for all the shards, and bleach out all the blue dye. 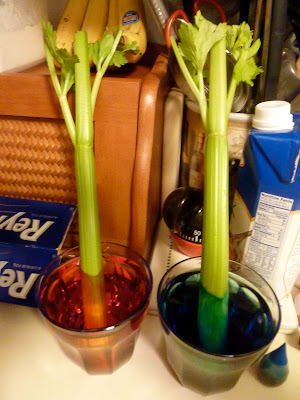 We then did a quick finish to our science experiment. We had discussed some of the parts of a plant and how water moves up the stem into the leaves. So we used some celery and food coloring to see it. Cecilia had been stalling cutting into them to see the red and blue veins the water had travelled through, but after the mess, it was time. 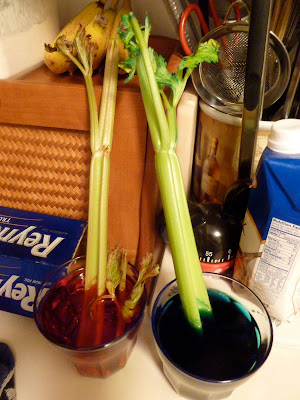 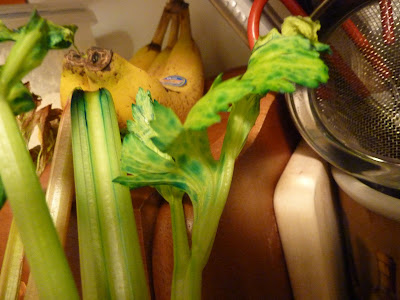 Now, I've been craving sandwiches, which can be a bit of a challenge with lunch meats off the menu for another months or so. So I got the girls in the car and picked up Chick Fila for lunch and bought an extra sandwich for later. Yum! 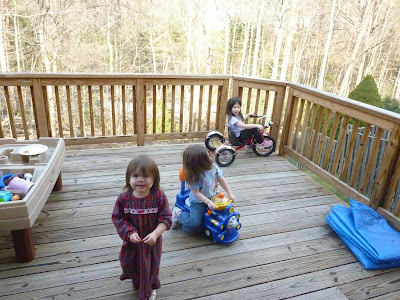 While the girls spent the afternoon playing on the deck in 69 degree weather, I sat by the open door and took advantage of a prints sale on the Kodak website. I only print photos twice a year - once after Cecilia's birthday in January and once in mid/late summer. It can be a pain, but 1/3 off prints is a nice incentive to get it done. Photos ordered! By the time it was clean-up time, Cecilia and Felicity had spent 3 hours playing outside and Elizabeth had spent 2.

So it is no surprise that by 8:30 Friday morning, Cecilia had already asked to go outside twice. The high on Friday was 72 degrees, yet we are forecast for a 40% chance of snow on Monday night/Tuesday. Go figure! All the more reason to take advantage of the nice weather while it lasted.
Posted by Katherine at 8:49 PM