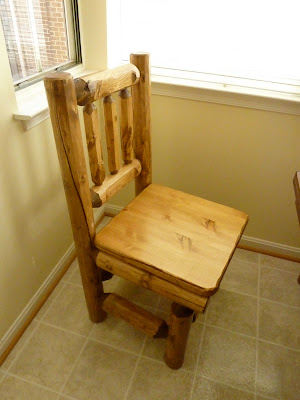 I spent most of Saturday cleaning and organizing. I cleaned and vacuumed the living room, swept the kitchen floor, cleaned the kitchen counters, 2 booster seats temporarily retired, and my new slippers I skillfully spilled a beverage in the day before. Then I vacuumed the play room and broke down the remaining of 4 large boxes that arrived the day before and prepped them for recycling. I then took pictures of our kitchen chairs for Craig's List since our new kitchen chairs arrived the day before (3 of the 4 boxes).

Our old kitchen chairs were not that old, but any warrantee on them had expired, one was damaged (not irreparable though) and at least two others seemed to be squeaking and moving more than they should. Another complaint about them is that they are so tall but so light (18 pounds) that they are rather easy for the girls to be in and yet tip over. So, for sanity and safety's sake, we decided to get new kitchen/dining chairs. We were much smarter about it this time though. These chairs, made of solid wood, are 38 pounds each (I'm not even sure Elizabeth can slide one much less tip one) and are guaranteed for life.

Our new chairs are also an inch or two higher such that Cecilia and Felicity no longer need a booster seat (do you have any idea how much easier clean-up after those two is now!?!). As my dad said, with these chairs, you actually feel like you are sitting at the table! 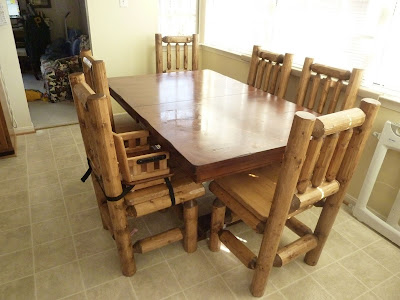 The fourth box was a chest of drawers for the girls room. Cecilia and Felicity each have 3 drawers for clothes in the bureau but with the impending arrival of Baby #4, we needed to move Elizabeth's clothes into her new room as well, so we thought it was time to invest in some more drawer space. This piece is also made of solid wood and is likewise guaranteed for life. It is from the same collection as the bunk bed but looks darker due to the treatment of the wood. These were kindof our Valentine's Day presents to ourselves and buying them all together helped get them a bit cheaper with cheaper shipping. 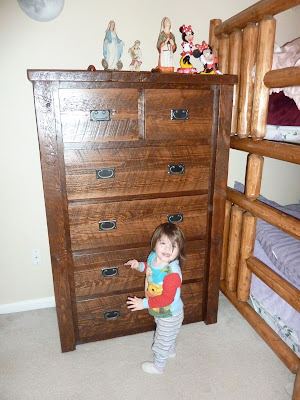 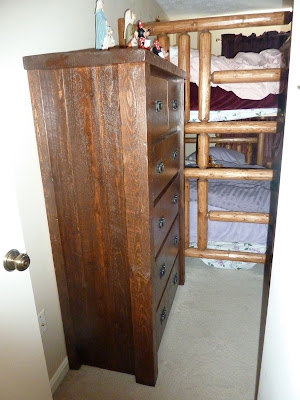 Sunday, as I see it, is my day off, to the extent a pregnant mom gets a day off, so we went to Mass and then had lunch at the Cheesecake Factory followed by some Super Mario Brothers and Duke whipping Georgia Tech despite referees who seemed incompetent beyond comprehension.

Monday I was pretty tired. I woke just before 3am from a dream that Melanie had given birth (Congratulations, Melanie!), which she had, but I'm no psychic - I knew she'd gone to the hospital before I went to bed, but also that another friend was pregnant and, to my knowledge she isn't (though her youngest just turned 1, so who knows?). It was just a night of baby-related dreams I guess, but after I checked my iphone to see Melanie was holding her adorable new baby, and made my routine trip to the bathroom, I couldn't get back to sleep for over an hour. Just as I was falling back asleep, Elizabeth fled her room crying and climbed into our bed, so it took me a little while after that to fall back asleep. I woke up around 6 with Elizabeth's feet on my face.

So, I made Monday's goals simple: 1 reading lesson for Cecilia, laundry, and cleaning the old kitchen chairs so they would be ready if anyone wanted to see them. I was pretty happy when those goals were met. Until. 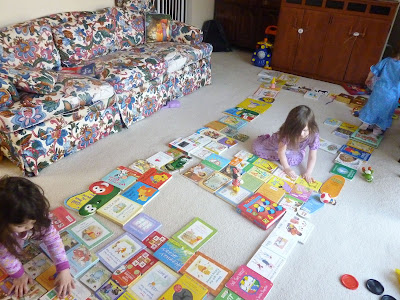 Now, both girls agreed to clean up their "Learning Path" of books when they began emptying the bookcase in the living room. But neither wanted to honor their promise. It is cute the way they have the characters walk along the books and talk about the books, etc. But it isn't so cute when I'm supposed to put an entire bookcase back together. (You can see Elizabeth walking the "Learning Path" in the corner) 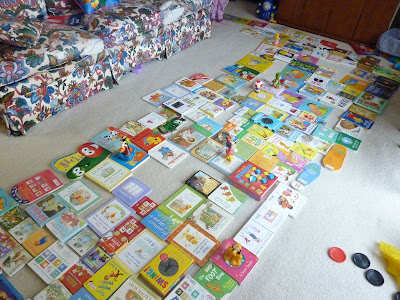 The girls also know they have to clean up the playroom before dinner too. What usually takes an hour or less became 3 solid hours of nagging, whining, crying, scolding and general misery. So it was with some confusion and skepticism on my behalf when the girls finally finished cleaning up and Felicity came up to me and said, "See, Mom, it not hard." I also went to my first TORCH meeting of 2011 and got to check up with some of the other moms. It is hard to know when I'll see some of them again considering I may have a newborn by the next meeting.

Tuesday Cecilia petitioned for a day off from school. I was having reflux from a breakfast of tea and toast (go figure!) so I consented. I took the opportunity to go upstairs and move Elizabeth's clothes from the changing table in our bedroom to the new chest of drawers in the girls' room. Then, in the changing table, I organized the clothes for the new baby as well as the baby blankets and diapers. Then I had chicken stuffed tortillas with mexican rice but had no reflux (again, go figure) and spent the afternoon watching the A&E Pride and Prejudice miniseries. I had to laugh when Cecilia cheered the credits only to lament it was only the end of Disc 1. That afternoon, it took the girls 2 hours to clean up their toys and that was after James threatened to put any toys not away by 5pm into storage. My patience was wearing on the toy-cleaning issue.

Wednesday morning I woke up from a dream of being in a store and Felicity having wandered off. I didn't find her before I woke up. I knew it was a dream as it was set in some smallish western town and I never contacted the police, but it still got the day off to a bit of a sour start. It turns out James had dreamt he caught a woman trying to take Elizabeth. It was a bad night for dreams. Cecilia did her reading lesson #63 and then all of us went on an outing to Target. We needed to pick up some things and the girls like browsing the toys they know we won't buy. lol. After our dreams the previous night, you can well imagine how attentive we were to the girls but all went well. After Target, we all went to Five Guys for lunch. The girls had been begging to eat at the restaurant for months, as opposed to one of us picking it up and bringing it home to eat. So we took the opportunity and ate there.

The early afternoon was fairly restful with Elizabeth napping and myself reading or online. At 2pm, I asked Cecilia and Felicity to pick up 3 puzzles they had left on the floor so that, in getting Elizabeth from her nap, the pieces wouldn't be lost. At 3pm, despite repeated reminding, the puzzles remained scattered on the floor. The nagging and dragging of clean up simply became too much. So I picked up the blocks and the puzzles and removed them from the girls' play and told them they needed to begin cleaning up the play room immediately. Despite my removing the puzzles and blocks, it still took them an hour and a half.

Thursday morning Cecilia was asking for puzzles. I told her if they cleaned up the play room that afternoon in a timely fashion, she could have a few of them back. I had every intention of at least getting a reading lesson in that morning, but between one thing or other, it didn't happen. James came home from the office early so I could take Elizabeth to a doctor's visit. She has had a red area on the back of her knee for over two months and while we've been able to improve it with cream, we haven't been able to get rid of it and Wednesday it was bright red. The doctor confirmed it was eczema and made a few suggestions to try to combat it a bit better. I admit it doesn't seem to bother her but the persistence of it was starting to drive me a little nuts and at least now we've spoken to the doctor about it before the arrival of the new baby.

James told the girls they could play Super Mario Bros. with him if they cleaned up the playroom. He said it took them about 20 minutes to clean up the play room. I knew it could be done. :::sigh:::

Friday was a rainy but warm day. So we all got in the car and went to the Arundel Mills Mall. We had lunch at Wendys, James got new shoes he needed, Cecilia and Felicity each got a lollipop, a cookie and to play around the Disney store, we picked up 2 more Wii remotes so we could all play as a family together, James got 30% off some shirts at Eddie Bauer and I bought a new lantern and the girls each got a battery-free flashlight (after two power outages last year, it seemed like a worthwhile investment, especially considering my lantern-flashlight from 2004 only works sometimes and we were using book lights as lanterns for the girls last summer), I finally got my cherry-pitter for the Spring cherries, and we all got some nice exercise walking around that huge mall.

The timing of our departure was perfect. As we finished getting in the car, the rain began again quite hard. Downpours like this I was used to in Florida, but Marylanders are not used to it and many people pulled off the road. By the time we were on the highway home we were getting pelted with marble-sized hail. Cecilia and Felicity had their hands over their ears it was so loud. Of course, by the time we were home, the whole storm had gone and the sky was clear again. It is really feeling like an early Spring with weather like this. We spent some of the afternoon trying to play Super Mario bros. all together as a family. Cecilia is quite good but Felicity, who has not had nearly as much practice, really struggles with the controls. So James or I usually had our character carry hers through the levels. She loved it so much though, she didn't want to stop. She loved the idea of playing with everyone even if it did mean Luigi was carried or was constantly walking into certain peril.

Well, overall it was a good week. It is hard to believe next week is March. Hope everyone has a wonderful Saturday, a rest-filled Sunday and a good beginning to March! (Lent is just around the corner....enjoy your last week before Lent!)

Posted by Katherine at 7:59 AM