Before I fell asleep Friday night, Elizabeth kept waking every 15 minutes crying. In surrender, we brought her to our bed where she curled against me and fell back asleep. By Saturday it was obvious she had inherited Felicity's cold. I didn't know if I was getting the same cold, didn't get enough decent sleep or was just having another late pregnancy symptom, but I was so tired I just wanted to go back to bed most of the day. Of course I couldn't but I did spend most of the day reading my book and just taking it easy. 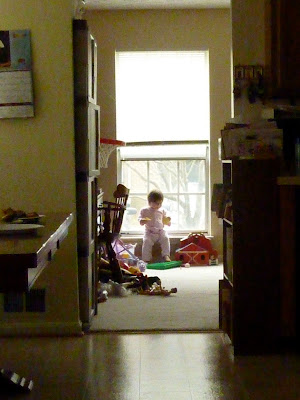 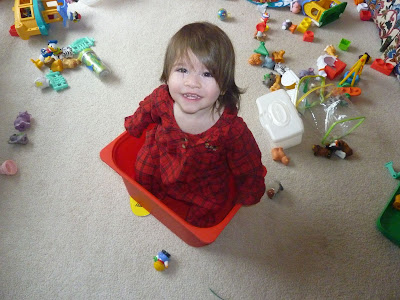 `Sunday Elizabeth's nose was still running and Felicity was still coughing and it was pouring nonstop. So James and I thought it was just best to keep the girls home and tag team Mass, so I went to the 7:30 and he went to the 9. Then, since I'd been able to make so much progress on my book on Saturday, I finished it. 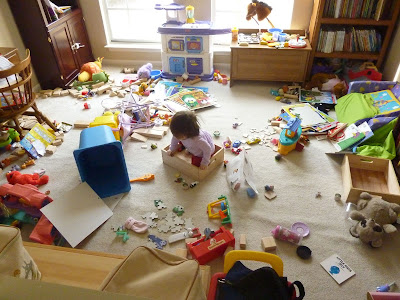 For anyone who might be interested, the book was called Inkdeath by Cornelia Funke. It is the final book in a fantasy trilogy. Occasionally characters would tick me off, but overall I rather enjoyed it. The book considers some interesting questions as far as, if we could enter any book we wanted, would we still find the world we currently live in better? Isn't it best that none of us are able to 'play God' as we are so limited in being able to see the repercussions of our choices and actions? Just what is the power of words and how careful are we with that power? The trilogy (Inkheart and Inkspell being the first two) are not my favorite read, but they were an enjoyable one. Unfortunately the film wasn't even a shell of the books. We spent the rest of the day doing as God intended - resting as a family. 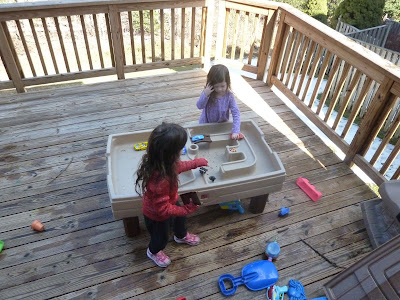 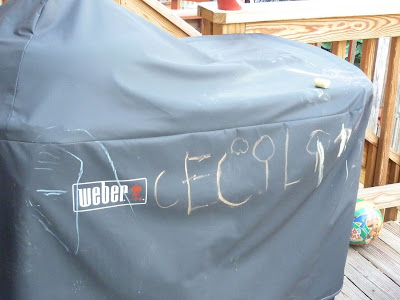 Monday Cecilia did her reading lesson #67 but she struggled with enough words we repeated it on Tuesday. She did a little math but gets easily frustrated when she gets any wrong. I got all the laundry done and packed a bit more for my hospital overnight bag. Tuesday morning we took it easy and just repeated Cecilia's reading lesson, which she did very well. After lunch, we decided to move up our outing plans for Thursday to that afternoon due to forecasted heavy rain all day on Thursday.

So we got in the car and drove Elizabeth asleep for a little nap on the way to the Franciscan Monastery. Not knowing exactly when this baby will be born but knowing it will be during Lent, we wanted to take the opportunity for me to get to Confession before it became impractical. The Franciscan Monastery offers confession on the hour several times every day. 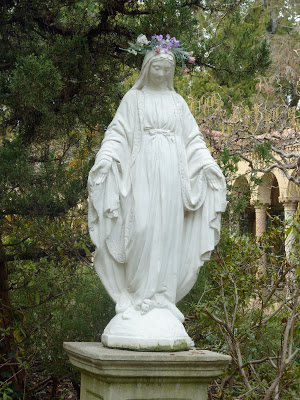 As I was returning from confession so James could go, Elizabeth woke up. So it seemed like a great opportunity to let the girls get out and stretch their legs around the gardens. They wasted no time. 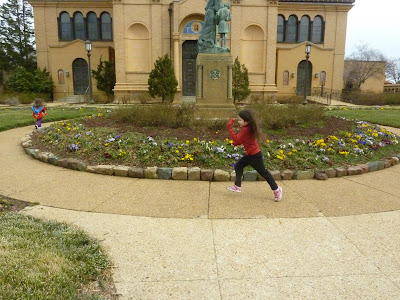 I did have to keep Elizabeth in the stroller until James returned from Confession just on the off chance she went one way and the other two went another. I can't waddle much less run two ways at once. I was really just a precaution as Elizabeth is positively awesome at staying with us and holding one of our hands. 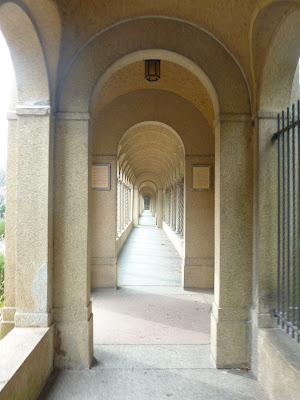 If you are ever in D.C., the Franciscan Monastery is a little haven inside an insanely busy and noisy city. You wouldn't know you were in a city once you are inside it. The porticos around the garden have mosaics of the Mysteries of the Rosary. 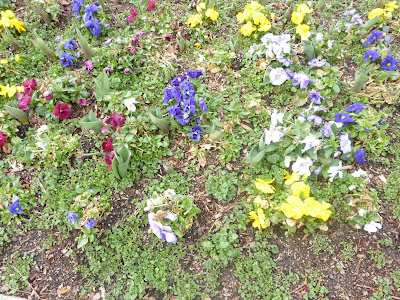 And, while they weren't out yet, their rose bushes are stunning. Most of the greenery wasn't quite out yet, but there were some planted impatiens and pansies and a few crocuses. 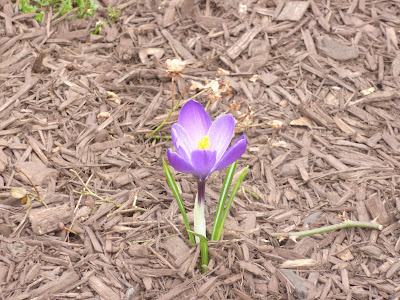 And I even ticked off one brave bee (it was really a bit chilly for bees) taking my picture of the beautiful hyacinths. 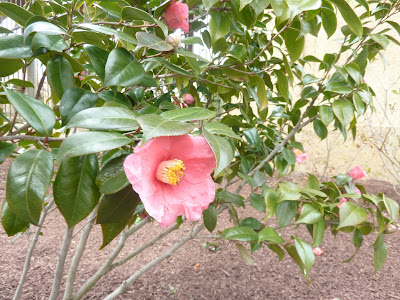 There is a replica of the portiuncula chapel St. Mary of the Angels, which was the first St. Francis' chapel. 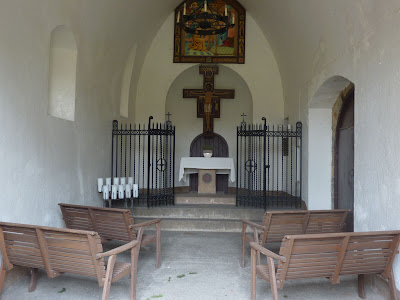 As well as a replica of the octagonal shrine on the Mountain of Lives in the Holy Land commemorating the Ascension. 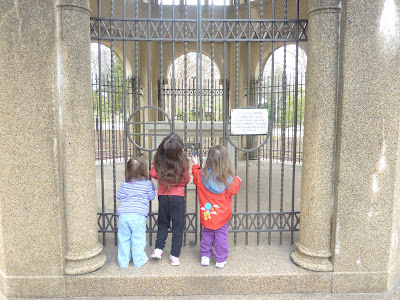 Elizabeth was particularly taken with a statue of St. Francis along side a life-size statue of a dog. She pet the dog. 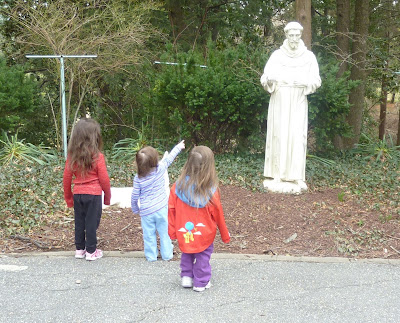 There is also an outdoors stations of the cross but that descended quite a bit to end at a nice flight of stairs and I was just not up for the climbing. So we got back in the car and went to the Ukrainian Catholic Shrine of the Holy Family across the street from the National Shrine. There, on loan from Philadelphia's Ukranian Catholic Cathedral, is the ninth authentic photographic copy of the Shroud of Turin. The copy is full size and one of the few sealed and authorized by the Vatican. We got to see the copy and there was even no objection to the girls touching it. They found His face, hands, wounds from the crown of thorns, scourging and nails and his hands. There was a visiting Orthodox priest from the Philly area giving us our tour and, since it was our first time in a Ukranian Catholic Church, we took the opportunity to ask about their church. He kindly gave us a tour and explained some of the similarities and difference between the Ukranian Orthodox faith and the Latin Catholic one. The girls were quite taken with his beagle Daisy. If you are in the area, the exhibit will be at the shrine until April 14th. We then ran to the post office, Target and had a mexican Fat Tuesday dinner.

Wednesday got off to a penitential start. Cecilia came to our room at 5:15am asking to go downstairs. Shortly after 6am, Felicity and Elizabeth joined her campaign. Before 8am I had given Cecilia a time out for intentionally hitting Felicity on the head with a piece of wooden train track. Elizabeth later hit Felicity in the head with a large plastic zoo playset. By 10:15am, Felicity was crying yet a third time when Cecilia accidentally hit her in the mouth with a plastic bucket. Blood and tears ensued. I wasn't sure if Lent was off to a more penitential start for Felicity or me but just getting through the day was becoming the more prominent goal. Cecilia did her next reading lesson and 2 pages in Math, so we were still on schedule.

But by mid-day I was running into a difficulty. Mild cramps and BH contractions seem to be pushing the baby even further down and I began to have hip and pelvic pain even when I just tried to walk. Just walking through the kitchen I would have to grab onto the counter or chairs to put less pressure on my lower midsection. When I went to get Elizabeth from her nap, I had to crawl part way up the stairs. In 4 pregnancies, I've never had such lower abdominal pain just from walking. I spoke to the doctor who informed me it was perfectly normal and is no indication of when labor would be. I expect, since this baby dropped on New Years (aka insanely early!), the continued and increased pressure of the baby being so low is simply taking its toll. So I spent the afternoon pretty much sitting on the sofa refusing to move. Sometimes it isn't bad and I can move relatively easily. Other times, that baby gets into a position, and "I don't want to move," becomes my motto.

Thursday got off to a decent start. Cecilia finished reading lesson 70 and, while she didn't want to do any math, she asked me to read from the Catholic Encyclopedia for Children the Passion and Resurrection stories. It was raining all day, so I suppose I shouldn't have been surprised when we lost power as our power company is rated one of the worst in the nation. It was off for almost 2 hours and came on just in time to make dinner. I can't say as I did much but as I seemed to be coming down with the girls' cold with an ever-increasingly worse sore throat, I also can't say as I felt like doing much. But I did get my Lenten reading begun, my Scripture reading continued, and even my new fiction book begun. Alas though, the day was yet to climax. During the daily ascent upstairs for bath and bedtime, Cecilia had been excited to tell me something and neglected to close the gate. A thump, thump, thump followed by wailing suggests that Elizabeth fell down the bottom part of the flight of stairs. She is very good on stairs, but she has never used them unaccompanied and the railing only goes about half way down and then you are expected to use a ledge. She wasn't seriously hurt but it took a little while for her to calm down and she might be a little sore or bruised.

Friday my sore throat was worse and I was sore because of the position the baby was in. I've never had a baby sit so low prior to labor. It is a little strange to think that, even though this is baby #4, I find myself in unfamiliar territory, though everything I've read and been told, it is perfectly normal and nothing to worry about. So Friday was mostly spent resting and taking it east with video games, DVDs and books.

I hope everyone has a very good and restful weekend and we will continue to keep those suffering from the tsunamis in our prayers. God Bless.
Posted by Katherine at 5:31 PM