Saturday and Sunday we really just took it easy. I became officially "full term" and my body continued to do itty bitty warm-ups. It only took 5 years for a time change to work to our advantage. Normally they are positively despised in this house. Lately though, we've had trouble getting the girls to sleep, or even stay in their beds, past 6am. So, though it was after losing an hour of sleep, it was a little exciting to see the girls sleep until 7am.

In fact, on Monday, the spell continued with Felicity getting up at 6:40, Cecilia at 7:00 and Elizabeth at 7:15! After Mass, Cecilia did reading lesson #70. It had a story for her to read about some boys who go fishing. All of the boys catch many fish except one, named Bill, who gets an old bag. All the boys make fun of him until Bill discovers the bag is full of gold. Upon asking Cecilia which she'd rather have, the fish or the gold, she said the fish. I found this a fascinating answer, particularly as she doesn't eat fish. All I can think of is that she is thinking of them as pets and she'd rather have pet fish than a bag of gold. Not many would answer the same. Innocence at its finest! Cecilia and Felicity spent most of the rest of the day playing board games, namely Hungry Hippos, Chutes and Ladders and Candyland. I actually had a decent amount of energy in the morning so I finished setting up the baby swing and raised the crib mattress (it was still on the lowest setting from when Elizabeth last used it). I also got all the laundry done. This amounted to a fair amount of going up and down stairs, so by the afternoon I was definitely slowing down.

Tuesday Cecilia did lesson #71 but she needed to repeat it Wednesday. Otherwise I took it easy. The baby continued to stay low but not so low that I couldn't walk. He or she was also pushing into my ribs making breathing a bit more of a challenge than it had been. So taking it easy was my main goal. I did finish reading the full book of Psalms. I began last fall, intentionally taking my time through it. Overall I love the psalms. It is one of the reasons I enjoy praying the Divine Office so much. But there were a few bits that just left a bad taste in my mouth. I mean, like Psalm 137 that laments the destruction of Jerusalem but ends with, "O daughter of Babylon, you devastator! Happy shall he be who repays you with what you have done to us! Happy shall he be who takes your little ones and dashes them against the rock!" I mean, I understand the destruction of Jerusalem was devastating, but geez! Fortunately the vast majority of the book of Psalms is simply beautiful and not quite so vengefully violent. I probably won't start Proverbs until after the baby is born though.

Wednesday I had a doctor's appointment. It took me an hour to get there and I was having BH contractions on the way. The doctor said I was only a fingertip dilated but the baby was at a station of -1. Upon returning home, I became quite crampy and having BH contractions, which I realize is a common occurrence after an exam this late in the game. Except as the afternoon progressed, they actually became significant enough such that I had to react to them, relaxing my lower half, etc. The continued irregularly until I went to bed around 10pm. I woke up at 1:47 and shifted positions and went back to sleep. I woke up again at 3am needing to go to the bathroom. Minor contractions continued but again irregular and not what I would describe as frequent. I couldn't sleep again after that. I got hot. I got hungry. I was thirsty. And I was having trouble breathing. I tried until 5:15 when I went downstairs to munch a few cheerios and sit upright for a bit.

I watched The Lottery on Netflix instant (good but not as good as Waiting for Superman) and munched a few cheerios while the contractions came and went. One thing very much confusing me was that I knew something was happening as the baby was insanely active and with quite a bit of force, but I had not had one contraction I couldn't handle. Not one I would say was significantly painful. I had a harder time walking, difficulty breathing and still more trips to the bathroom, but the contractions seemed strangely easy to handle. Was I getting better at this? Was it just false labor? The contractions were very irregular, but so they were for my previous two labors until I got near or past transition. So I spent the day resting and watching as any activity slowed to a halt and disappeared. By evening I concluded it was false labor, my first experience of it.

Fortunately, after having gotten up at 3am the day before, I got six straight hours of sleep for Friday. After 4am it was broken here and there, but still, those 6 hours were greatly needed and appreciated. Friday also happened to be my husband's birthday. Unfortunately, with my difficulty walking and 3 little ones, I never got out to get him a card from me nor any from the girls. Most of my head has been baby-focused making Lent and anything else harder to focus on. We spent the morning playing some Mario Bros. and had lunch home and then headed out. We got Elizabeth a nap in the car and went to the Columbia Mall. I got some new candles (I regularly burn one in the kitchen, for the aesthetics of it but also so no smell from the garbage can is detected and I was on my last one), the girls browsed/played through the Disney store and we stopped by the Apple Store to see the new Ipad2. More importantly it got all of us, especially the girls, out of the house and it got me some waddle-time around the mall. We then went to StrideRite, which is having a sale, and got Cecilia and Elizabeth new dress shoes. Felicity's are forthcoming. Finally we went to Bertucci's for James' birthday dinner. It is an italian place with woodburning ovens for awesome pizzas. So yummy! 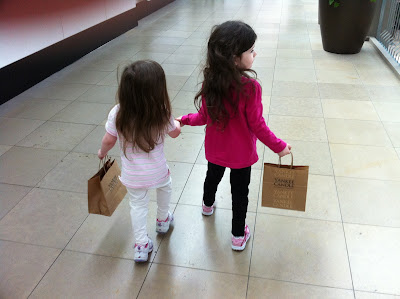 It was a strange week and the 2 days of uncertainty of the seriousness of the contractions threw me off but our week ended well. We didn't get to celebrate St. Patrick's much, but I hope everyone has a blessed Feast of St. Joseph!
Posted by Katherine at 7:28 AM