Well, Saturday James did the food shopping, I put away the groceries, James picked up Five Guys for lunch, I gave James a haircut, Cecilia and Felicity cleaned up the playroom, and then I vacuumed the living room, playroom and kitchen. It was a productive but tiring day. After that, we pretty much took it easy. That evening, Cecilia finally agreed to have her hair trimmed. We had never trimmed it. She insisted I do it and she was fairly emotional about it. I trimmed 1-2 inches off the end (2 inches in the middle, 1 inch or less on the ends as it had grown much longer in the back than on the ends). She was pleasantly surprised to find it didn't hurt (despite how much we told her it wouldn't) but after I left James to get the girls asleep, I broke down sobbing in the shower. All I could think of was how I had just cut off those earliest baby curls and they were gone forever. Thank you SO much hormones!

Sunday, after Mass, we picked up Cheesecake Factory and took it home for lunch. We then watched Duke barely beat Michigan. After the girls cleaned up, we turned on the Wii. We recently got the original Super Mario Bros. and its 2 sequels playable on the Wii. Yes, the originals. The graphics make us laugh, the levels are so short, and the greatest challenge to whipping the game is its primitive play. But, the 1985 game makes for some fun play for Cecilia as movements as simple as running and jumping she can easily do. She loves the idea that she can play by herself. Felicity tries but she keeps holding the remote upside down and has trouble running and jumping at the same time. So Cecilia is very happy to help her.


Monday was very rainy and dismal, so I was mildly amused that I had a bit of an energy burst. Before 8am I had all the girls fed and breakfast cleaned up, the dishwasher emptied, the kitchen counters found cleaned,   and fresh decaff iced tea made. James got the bread baking and, after watching Mass on EWTN, I got the laundry sorted and started. Cecilia repeated Reading Lesson #71 and did very well but would need to go over 3 words from that lesson before we begin #72 (there, yelled and smile). I spent most of the afternoon slowing down (not drinking caffeine until 3pm will do that) and reading. It is a welcome dilema when you are reading two books you are enjoying so much you really want to figure out how to read them both at the same time! 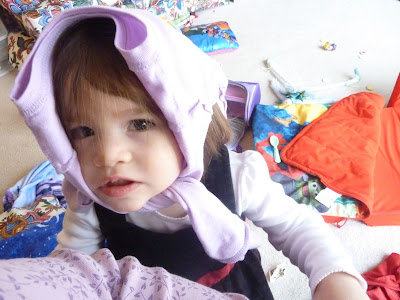 Tuesday I was tired. I was up at 1, 3, 4:30, 5:30, 6, and finally got up at 6:30. Ah, how I missed that energy from Monday. Oh well. Fortunately it was sunny and warm, so Cecilia was outside before 9am. Unfortunately, Elizabeth is still a bit young to be out without an adult, so she couldn't go out, but Felicity hadn't felt like going out yet either, so she kept Elizabeth company while Cecilia frolicked for a bit outside. I read a bit more in my fiction book and then alternated between fiction and lenten reading.

Unfortunately, Tuesday night, I was up again at 12:15, 3 something, 4:30 (when Cecilia came in telling me she couldn't find her Hello, Kitty stuffed animal), 5:30 and got up at 6:45. So I was still tired Wednesday, and even more than Tuesday. I began joking how I would get more sleep once this baby is born than now. At least then I can oust anyone from the room with a, "Don't wake the baby!" I had an OB appointment. All went well with the baby's heartbeat a steady 135 or so. They actually had to take my blood pressure twice. The first time it was up to 138/80. It was still normal, but up for me as I have been 117/70 for several months now. The second time it was back within my usual range at 117/80. This was odd, but I have to wonder if it couldn't have been related to the fact that the doctor had to wait a minute to measure me as I was having a contraction when he first tried. I had not even noticed any contractions, but that might explain a temporary increase, still within normal, in blood pressure. I love those contractions I don't even notice. Of course, eventually they will make themselves heard. I spent the afternoon trying to rest without falling asleep on the sofa while three girls played around me.

James gave his first student organization lecture that evening so bath and bedtime were only and all me. When he went to leave at 6:15, Cecilia melted down and refused to let go of him. She even tried to run out of the house following him. This was followed by her sobbing in her room. Shortly thereafter, Elizabeth accidentally slammed the door on Felicity's finger. Felicity sobbed until she fell asleep. It was one of those evenings you drift through just taking each thing as it comes simply because you are too tired to get upset, frustrated or angry and simply treat yourself to a margarita ice cream afterwards. 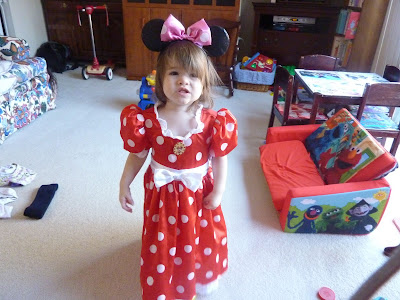 Thursday I was, yes, again, tired. I had my usual bathroom visit just after midnight but woke up again around 1:30 with a sore stomach. By the time it had passed, I'd been up an hour or so and it took me until around 4 to fall back asleep. Cecilia refused to do any schoolwork but I wasn't about to let her get away with only 1 lesson this week. So I put on Sesame Street and told her she couldn't watch it until she did a reading lesson. Mommy won. It was a good thing too. She has missed enough days lately that she is struggling more than she used to. She had no problem with "yelled" but "smile" and "there" continued to present problems and then she had trouble with "hill" and "fly." "Fly" I admit is not the easiest word. She isn't used to reading "FL" together and the y has the I sound. She may drive me nuts over the other three though, especially when she kept making such silly mistakes. She knew the i in "hill" was a short i but she kept putting a long one in anyway. Over a dozen times no matter how many times I said it was wrong. It was a bit exasperating for both of us but even if I do become a bit curt when she is not really trying or paying attention, I do try to compensate with high praise when she does it right. What really drives me nuts is that she can be absolutely awesome about putting sounds together to read a word. She can read "white" and "brushing" and numerous long or difficult words and then she gets to "S-M-I-Le" and she will repeat the individual sounds separately 30 times without putting them together. In fairness, 9 months pregnant and tired, I'm probably not my best at teaching at the moment, but I also don't want to let everything go completely for fear she will only struggle more later.

On Tuesday I had discovered that our toaster oven, while it could still toast, ceased to be able to bake. We use it to toast and bake almost every day and have had it since my bridal shower 6 1/2 years ago. But  as it is faster, easier, and more efficient to use the toaster oven to bake when possible, we thought it best to invest in a new one. Our new convection toaster oven arrived Thursday and I began figuring it out Friday morning. I actually felt pretty good Friday. I had finally managed a good night's sleep waking only once between 10 and 6. So after lunch we all got in the car and drove some garbage to the county dump, got Elizabeth a nap on the way, went to IKEA to get James a new desk chair, stopped at Sears to return some items and picked up Elizabeth a new spring dress and Cecilia a sweater, drove through the bank ATM and picked up Chick Fila for dinner. By the time we got home, I was quite tired. I had had random contractions through IKEA and Sears but still nothing consistent and still nothing what I would describe as painful, apart from the fact I was trying to walk through them.

So, here we are still playing the waiting game. I hope everyone has a good weekend. I've never before made it to a due date, so I'm hoping sometime this week. This baby had been so low, so low in fact I couldn't walk at times, that I didn't even expect to make it this far. If this baby is born on the 29th though, every one of my children will have a 9 in their birthdate, so I'm still curious to see just when this little one will choose to make his/her appearance.
Posted by Katherine at 9:21 AM