Around 3:30am, Wednesday morning, I awoke to a contraction. They randomly kept me up until 10am, when they slowed enough that I was able to take a 2 hour nap. After lunch they picked up again, coming a frequently as every 5 minutes. But by 3pm, they had slowed so much that I went to lay down again. I couldn't sleep again but around dinner they picked up again, sometimes coming as frequently as every 2 or 3 minutes but only just as they were finally beginning to last close to a minute, they slowed again, even halting around 8:30pm. I named it a "yo-yo" labor. Around 9:30pm, we went to bed but the night was really only beginning. 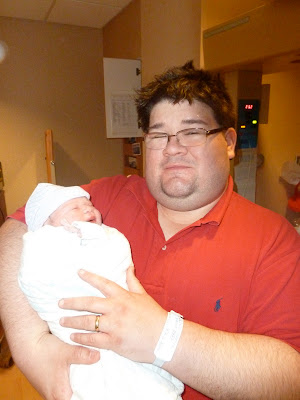 The drive to the hospital was the smoothest in terms of traffic. The Beltway never looks like that! But sitting in a car having contractions for 35 minutes isn't the easiest way to have contractions. And 66 in Virginia with contractions would make a soldier spill military secrets. It is simply too bumpy to continue to exist.

We arrived at the hospital at 2am. I had been having contractions, off and on, for almost 24 hours. So you may well understand why I was ready to cry when they checked me and determined me to be only 2 cm dilated. They didn't even seem certain I was really in labor and kept me in triage for an hour to see if I progressed. 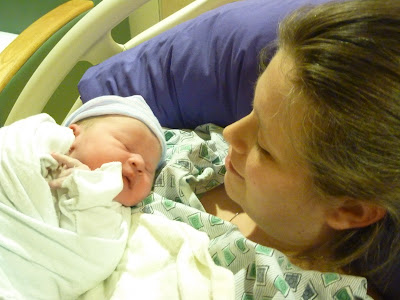 I knew I was in labor, but staying in triage was a pain. The bed is smaller and harder, the lights brighter and the room generally noisier. I really wanted to deliver naturally, but as the hour progressed and the contractions got more intense I began to doubt I could do it. Fortunately, James came to the rescue encouraging me that I could do it and telling me how proud he was of me. I really had thought it had only been something like 20 minutes, when the doctor came back in and said it had been an hour. Being rechecked, I was declared 4-5 cm dilated and 70-80% effaced. Finally, they took me to a room. 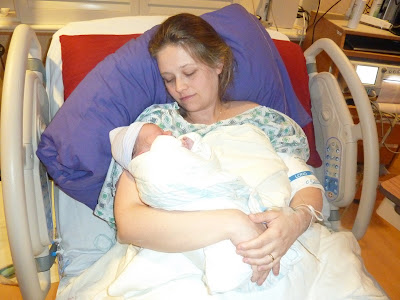 I opted to walk a little bit before being hooked back up to the monitors. Then I laid back down to deal with each contraction as it came. James sat beside me encouraging me. Not long after 4am, he began reading the Divine Office for the day to me. He got through the Office of Readings and began the Morning Prayer. I had been praying Our Fathers through the contractions. It ends up being this speedy version I can race through in a vague attempt to offer up and ask for grace that I also know well enough I don't need to focus too much. I remember though, around 4:30, the contractions became so strong, I couldn't even pray that but was only saying Jesus' name over and over again. One word was all I could handle. About 10 minutes later, I begged and pleaded for help from Mary. (I find Mary a bit harder to connect with, so this was unusual for me.) And suddenly it felt like there was this pressure. Not necessarily an urge to push, but pressure.

I was still waiting for that familiar burst of water. But nothing. So I thought maybe I needed to go to the bathroom again and maybe, just maybe, my water would break then. My nurse, an absolute sweetheart named Wendy, unhooked me from the monitors and I went to use the bathroom. Try as I might to make use of it though, the pressure only mounted until I could feel something more akin to a burning sensation. I knew that feeling. James went to get the nurse for help as he saw something was not going as expected. I hollered for help. 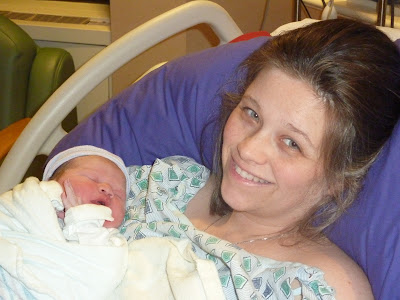 When the nurse got there, she said I was white as a sheet. I don't know how white, but I know my legs were shaking and I was having trouble focusing my eyes on one point. They kept moving around the room. I was trying to hard to put the pieces together but everything was happening so fast. One nurse waved an alcohol smelling salt in front of me. (I'm not a fainter by any means, but it did help me focus better.) Two nurses helped me waddle to a wheelchair where they pushed me back to the bed. As soon as I laid down the next words I heard were, "There's the head." I couldn't believe it. I was so stunned. My legs were so shaky, the nurses had to help position them. Wendy told me, "One push and the head will be out. Just push through the Ring of Fire." 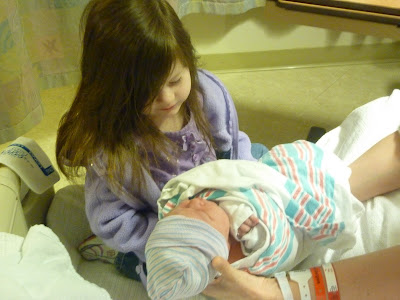 Sure enough, one good push later, the baby's head was out. The urge to push became involuntary at that point and out came the rest. I was stunned to hear, "It's a girl!" I had thought for sure this baby was a boy. It was a morning for stunning me I guess. I do, however, hence forth swear off ever guessing any baby's gender ever again! So, in just over two and a half hours I went from 2cm to giving birth. I was so glad I had not opted for any intervention and so thankful James had been there to keep me going. He was right.

While we had narrowed down our boys' name list to 4 or 5 possible names, we knew our girl name so her name was easy. Teresa Marie was born at 4:50am, Thursday, March 31, 2011 weighing 8 pounds and 5 ounces and measuring 20 and 3/4 inches. She is my biggest baby to date by half a pound and she was, like Cecilia, 3 days early (of my due date, or 8 days early of the sonogram due date). 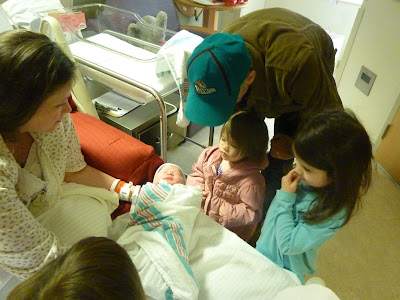 That afternoon, James and my dad brought the three girls to meet their new baby sister. Cecilia says she is cute and she loves her. She gives her kisses but her interest has been more directed at what color her eyes are. Elizabeth has given her a few kisses and likes to try to hold her hand or touch her toes but most often points at her and says "baby." Felicity, however, may be Teresa's second mother. She dotes on her endlessly. She brings her toys, kisses her and caresses her, holds her hands, strokes her hair and repeatedly says she loves her. She also asks many questions from what that thing on her belly button is to if she can talk to when will she be able to play in the playroom. 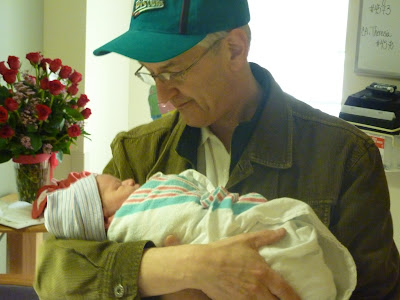 My time in post-partum had another amazing nurse, Amy. She was confident and experienced enough in what she was doing that she wasn't afraid to recognize that, giving birth my 4th time in just over 5 years, I had a pretty good idea what I was doing. By the time I left, she said I was her easiest patient. My night nurse, Tracy, was very good, but also very textbook concerned that I should see the lactation consultant, etc. Fortunately, I was only there one night. Teresa spent most of her first day sleeping and filling her diaper. It wasn't until the evening, when I was more than ready for bed, that she decided she was ready to eat. She loves to be held at the moment and currently despises her diaper changes but she has maintained wonderful color and nurses well. 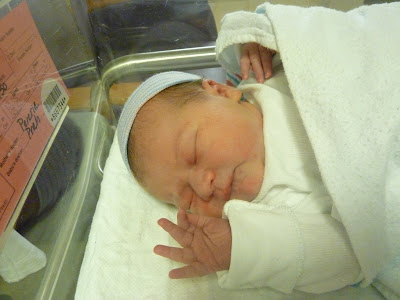 We had always brought the carrier car seat in to carry the baby to the car in, but this time we thought, why not just bring the stroller for it and make it easier on us going to the car. I don't know why it never dawned on us to do that before but maybe it had something to do with the baby then screaming herself silly almost all the way to the car. I thought for sure she would be like Cecilia and despise the car ride but as soon as we put in her in the car, she was asleep and she slept the whole way home. Even after we got home, the girls kept asking when she was going to wake up! 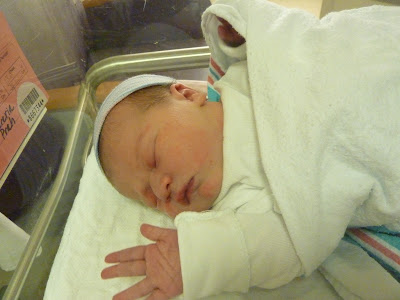 So we are now a family with four daughters. Four girls. I have no sisters, and yet I am raising four of them. I am already getting the, "wait until they are teenagers" comments but I cannot help but feel humbled and immensely blessed by the task before me. We are now a family of 6 and each and every one of our daughters is a gift of beauty, an occasion of grace, a challenge of vocation, a hope of the future and a joy to the heart. 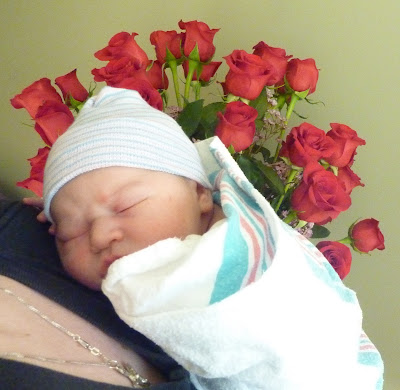 That is Teresa's birth story. It was much longer and more dramatic than I expected. (My doctor mentioned later that there was one patient who had recently given birth in the parking lot and a passing-by doctor had to deliver the baby.) So I am very grateful all went well and recovery has easier as familiarity has built confidence and recognition. She is named after St. Teresa of Avila, the great reformer of the Carmelite order and mystic, and the Blessed Mother. 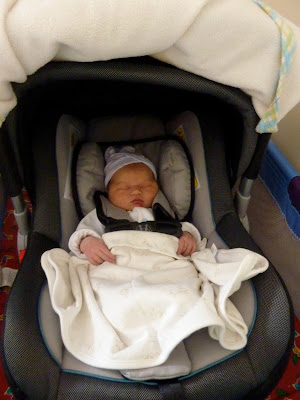 Posted by Katherine at 9:06 PM