Less than 24 hours after Teresa's entrance into our wonderful Church, we were packed up and on the road driving to New York City. I grew up not far outside the city and made visits there regularly when I was young but going to the city with 4 little ones is a whole different experience.

The first challenge we encountered was the hotel beds. They were so soft and plushy it was very difficult to cosleep on them. I would have to be at least a foot away from Teresa for her not to roll down onto me and while she is welcome to sleep on top of me, this provides the real temptation of nursing all night for her. In the end, we did the best we could, but she basically slept on top of me.

We also discovered it was actually cheaper to leave our minivan, which being a minivan already merited an extra $10 charge, parked until we left the city than taking it out to use repeatedly. Every time we parked it was $26 no matter how long it was there. If we left it overnight, it was $36 and generally a cab ran less than $10. We walked a few times but it rained the whole time we were there. So we cabbed it several times, much to Cecilia's delight. She loved riding in the cabs and asked to take them at every opportunity. 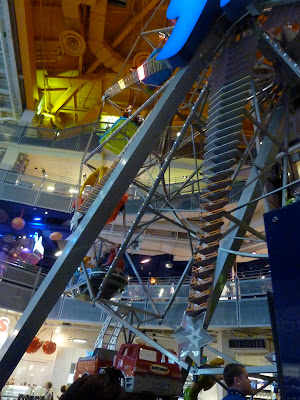 On Monday we took a cab to Times Square to take the girls to the huge Disney store only to discover it was closed for a week, yes, this week. So we walked a block to the ToysRUs store, which has a ferris wheel inside in addition to all the toys. We all went for a ride on the ferris wheel. Grandma, Felicity, Teresa and I rode in the M&M car and Grandpa, James, Cecilia and Elizabeth rode in the Little Tikes Car. The girls loved it and at least Felicity was asking to go again, but Teresa wouldn't hear of it. 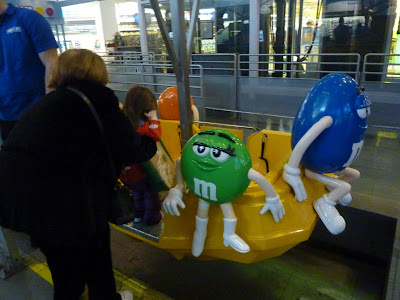 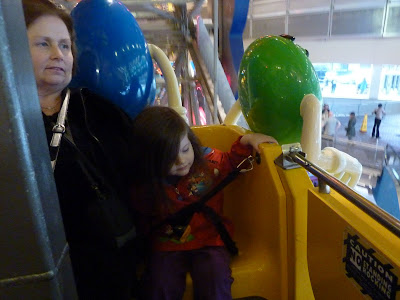 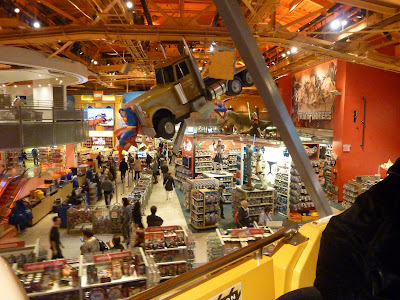 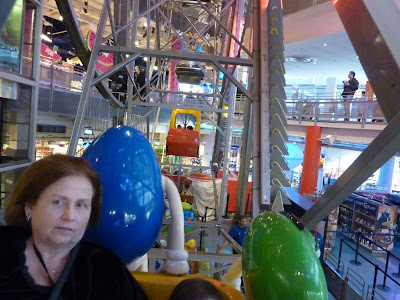 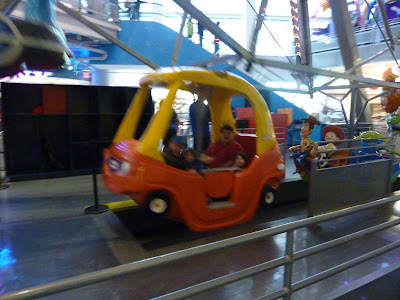 After letting the girls play with their Thomas the Train section, we went to lunch and rested briefly at the hotel before going to the Javits Convention center for the Tisch School of the Arts Salute to those of their school graduating from New York University. Both of my brothers graduated this week from this school. One brother graduated in Drama and the other in Film but unfortunately both disappeared in a sea of purple which was only one band amidst an ocean of family and friends. Add in the consideration that we were trying to keep 4 little girls quiet and content through the 2 hour ceremony and you may well imagine I did not get many pictures and when I tried, I had a very hard time getting close enough to see anything or get it in focus. The girls were very good though every time poor Teresa tried to fall asleep, there was another wave of applause to wake her. The convention center has a significant echo making the event very loud. The school also seemed to have a misconception to the purpose of the arts. The goal of "disrupting" society and the world seemed to be a primary focus rather than art reflecting truth and drawing the person closer to truth. "Disrupt!" has become a running joke among us as it seemed to be the theme of the ceremony. 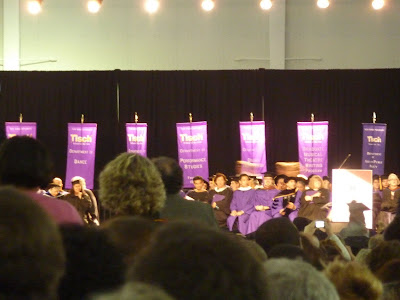 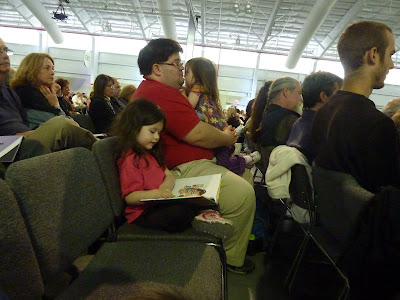 Monday was a long but successful day and we all were there to cheer for my brothers of whom we are very proud. On Tuesday cabbed it again to the American Museum of Natural History, which I remember from when I was growing up. It is an absolutely amazing and wonderful museum but, unfortunately was under so much refurbishment that if they sectioned any more off I think they would have had to close. Seriously, it should have been half price for the amount of construction there was. But the girls loved their visit. They went into their special butterfly exhibit and had the butterflies land on them, saw the Ocean room with the giant blue whale, visited North American Mammals and the African Mammals, but the biggest hit by far was the Dinosaurs. Ever since Curious George climbed the dinosaur bones Cecilia has been aching to go to a museum and see the dinosaur bones and, unfortunately, the Smithsonian didn't have a very big exhibit but this museum has quite a bit. Cecilia even begged to go to the "dinosaur store" where they got some small plastic dinosaurs. Cecilia says her favorite is the pteranodon. 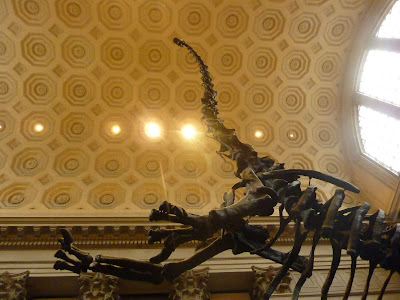 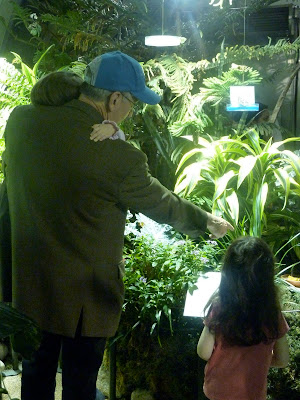 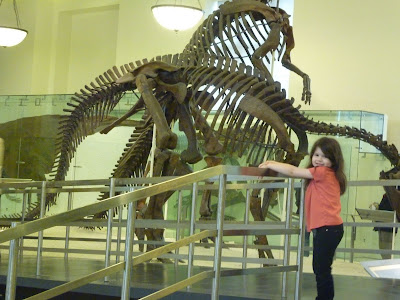 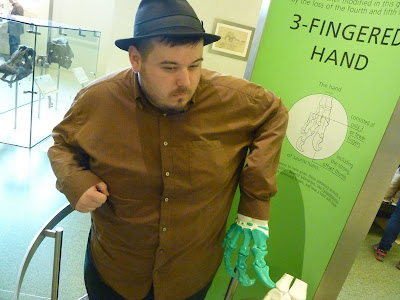 My brother trying on a dinosaur hand for size. 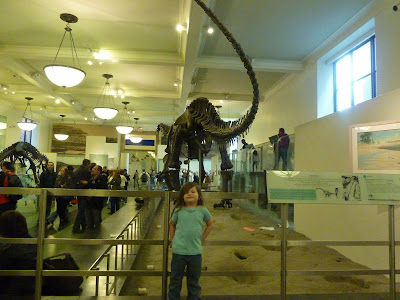 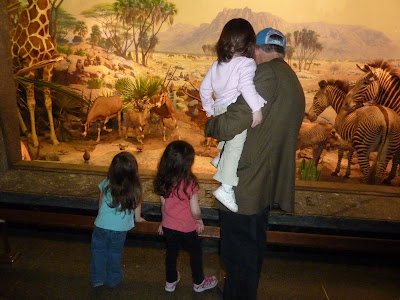 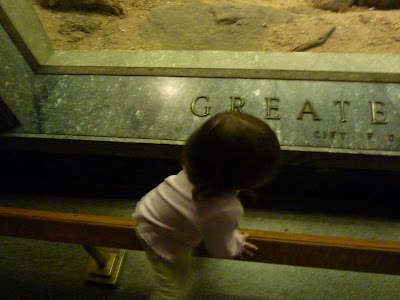 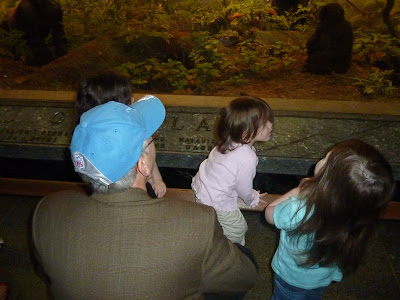 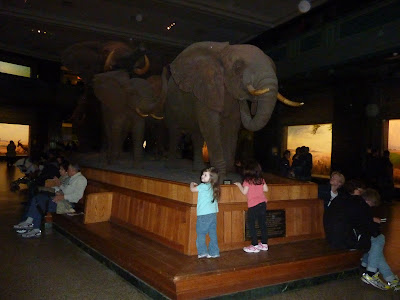 After the museum, we went back to the hotel for a brief rest and then met both my brothers and my brother's friend and girlfriend for my brother's (yes, the one with the dinosaur hand) birthday dinner at Lombardi's. Lombardi's is the first pizzeria in America and oh boy was it good. The bruschetta appetizer was delicious but the pizza was amazing. So delicious. I ate four slices. I will never understand what Chicago thinks it is doing with thick pizzas. (Italy wouldn't either.) But I digress.

Wednesday we paid the $102 to park our car for 3 days. While I was waiting in the lobby with our luggage and all four girls for James to bring the car, Teresa's digestive system decided to catch up. She hadn't gone in two days but, as I said, when she goes, it is nuclear. She filled the diaper and it began leaking up her back, around her hips and down both legs. I picked her up out of her seat to keep the seat clean but we had to do an emergency naked baby cleaning in our car there on 40th street. James had actually been delayed with the car because he didn't see a red light hidden by buses in the middle of a block (not at an intersection) and a policeman pulled him over. Fortunately he just got a warning but our departure from NYC continued to be interesting. Though our hotel was only 5 minutes from the Lincoln Tunnel, the Lincoln Tunnel outbound was closed to all cars and we had to sit in another hour of traffic to get to the Holland Tunnel. We had never been so happy to see New Jersey! LOL

It was a good trip but not without its stress. I remember NYC being a place of excitement but now, going there with four small children, it seemed more like a jungle of steel and concrete out to get my children. From the cab we were in that almost hit a bicyclist to the nudie bars every other block, I found myself baffled how anyone could raise children in such a city. I am usually a very protective parent but, from the physical dangers to the moral ones I felt that 100 times over. Thank God we don't live in the city and praise God, we are home again, safe and sound. 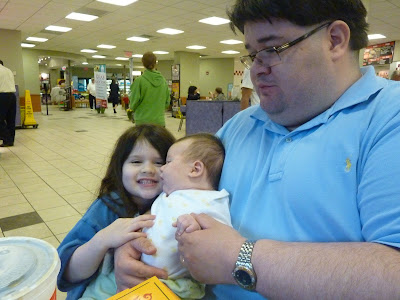 Cecilia, Teresa and James at the rest stop on the way home.
Posted by Katherine at 9:19 AM