Well, Monday I had a nursing fiend on my hands, but, fortunately, I still managed to get all the laundry done and get the kitchen swept. Cecilia did very well on her reading lessons. I also discovered that, as Teresa is spending more and more time quietly alert observing her new world, she really prefers to be vertical, even the point of falling asleep sitting up.

So, on Tuesday, I pulled out my Baby Bjorn to see what she thought of it. She napped in it on my chest while I got the other girls' lunch. Cecilia preferred to be vertical too but in Teresa's case, I can't help wondering if the fact she was vertically upside down for all of January, February and March has something to do with it. 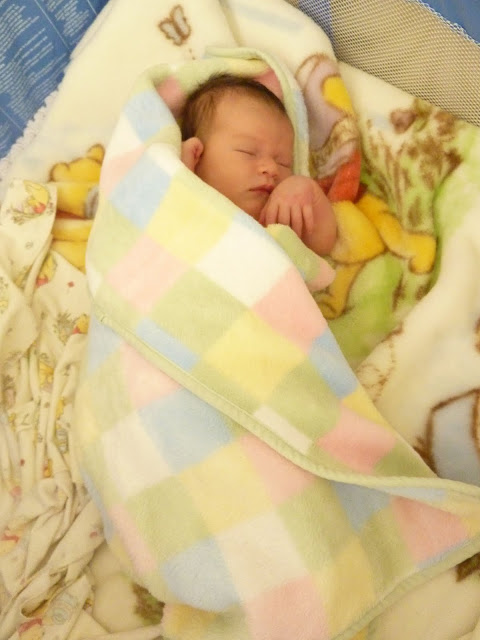 I also found out that the antibiotic I was taking twice a day, I was supposed to be taking three times a day. :::sigh::: We don't know if the physician's assistant screwed up or the pharmacist, but the bottle said twice. I still can't believe how ridiculously complicated it has been to just get an antibiotic. I cannot be the first nursing mother to need an antibiotic! So on Wednesday, when I was still having symptoms, I called up my OB/GYN's office and explained the situation (they would undoubtedly know what a nursing mother could and couldn't take). They said to come on in and I got to see the doctor who is the head of the office. He gave me a prescription for a much stronger antibiotic, went over with me before I left when I should take it and even checked that it was fine with the American Assoc. of Pediatrics. Thank God for the Tepeyac Family Center! They are SO worth the drive to Virginia and Teresa slept the whole way there and back again. Hopefully this will be the end of the infection.

Thursday we all ran to Target and picked up Chick Fila for lunch. Then, while Teresa napped in the swing, James got some one-on-one time with Elizabeth while I took Felicity and Cecilia outside for some weeding. I weeded for about an hour before we were chased in by bees. Cecilia and Felicity helped a little, but mostly they ran around, dug up worms, pulled dandelions, climbed trees and played some version of frisbee with their gardening kneeling cushions. We were all red-cheeked by the time we came in.

Friday James ran to Home Depot and bough a couple of azaleas to replace the one that died and some mulch. Cecilia, Felicity and I finished the weeding (as much as the bees would let us) and then they helped James plant the new azaleas and spread the mulch.

Cecilia is beginning to get very into reading by herself. This week she asked us to set up the play house they got for Christmas. 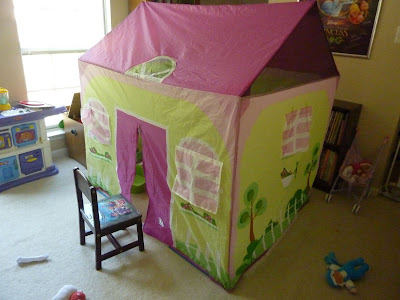 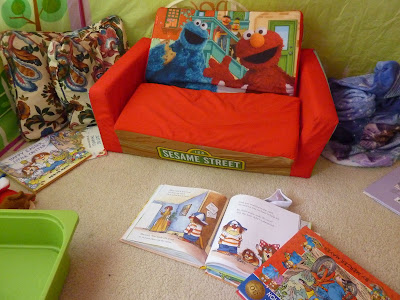 She set up a little sofa with pillows and a blanket and brought half a dozen Little Critter books inside to try to read them. And when I say read, I don't mean recounting the stories from memory or making them up as she went. I could hear her sounding out the words. She was really reading them! So exciting!!!

Have a blessed weekend!!
Posted by Katherine at 5:40 PM