Unfortunately, on Sunday, I came down with a cold, which Elizabeth had also began the day before. We had planned to make a couple of stops on the way home, but being sick and tired, we shortened out drive and decided to make it home in two days instead of three.

By Monday night we stopped in Florence, South Carolina and the choral of coughs began as Cecilia, Felicity and Teresa showed signs of getting the same cold.

By Tuesday morning, 5 of the 6 of us all had the same cold. We went to a nearby Krispy Kreme for fresh off the belt doughnuts. Yum!

But Cecilia has as sensitive a stomach as she does temperament and it didn't take long before she began feeling sick. We pulled over somewhere in the middle of North Carolina just as Teresa squeegied and Cecilia threw up.

Elizabeth spent the afternoon crying to get out of her car seat and throwing pretzels, even getting one in Teresa's car seat. Then we hit rush hour on the beltway. We got home at 6:30 sick, tired, and a little claustrophobic. (Those initially planned stops were for a reason.)

As soon as Elizabeth got in the door she bolted for her toy blocks. James unloaded the car and then went to the coolest room in the house to cool off. Teresa wailed to get out of her car seat carrier. Cecilia curled up on the sofa and asked for gatorade.

Needless to say, we spent Wednesday at home, resting and recovering. And we will need it.

As wonderful, fun, exciting and busy as these past weeks have been....

Fortunately, this time, we don't have to pack ourselves. But still, moving with a 5 year old, 3 year old, almost 2 year old and 9 week old will have its stresses. We also aren't moving far but, of course, that doesn't mean everything won't need to be unpacked. 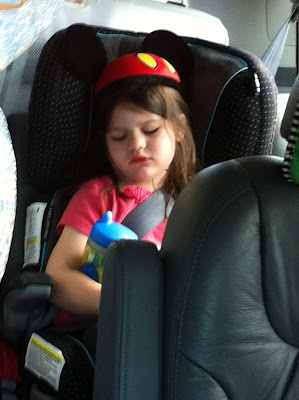 Posted by Katherine at 3:19 PM