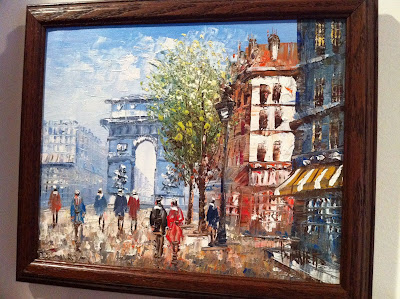 This is a painting that James bought in Paris of the Arc de Triomphe and it hangs in his office.

See the white building with the red roof, second from the right? It has three floors of windows above a shop of some sort?

Felicity says she lives in the middle one. She says her "girls" live on the floor below. She says "girls" because that is what I call my children since I have 4 girls, but she says she has 2 girls and 2 boys. She says the girls names are Shine and Shine-ah (sp?). One boy is named Peadore but either doesn't know the name of the other boy or won't tell me.

She also says one of the stores in the picture sells ice cream.

So, she lives in Paris, France, has four kids, and eats ice cream. Sounds good to me!
Posted by Katherine at 8:24 AM