Each season I ask the girls (if possible) what activity they might like to do or try. I throw out various possibilities: swimming, soccer, basketball, baseball, gymnastics, ballet, tap dancing, ice skating, etc. They don't have to do the same ones but I try to encourage them to try something or continue something if they like it. Last fall we did swimming. I wanted to do the winter session as well, but they cancelled their Saturday class and I couldn't do it any other day as I had to be in the water with them and wasn't about to juggle Elizabeth on my head. In the Spring, Teresa was born, then, in the Summer, we moved.

So we are finally doing an activity again. Both Cecilia and Felicity wanted to do Ice Skating. I signed them both up for one 7 week session and bought them the required bike helmets (not that they shouldn't have them anyway for their bike/scooter rides). Today was their first lesson. 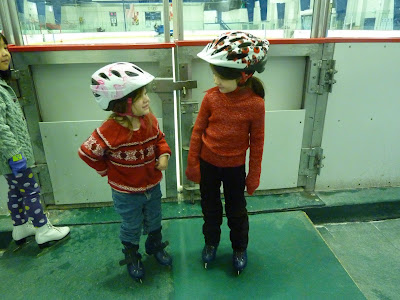 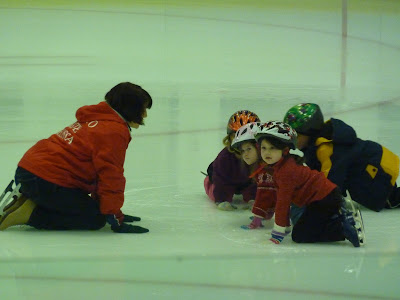 First they had to crawl on the ice and get a feel for it. 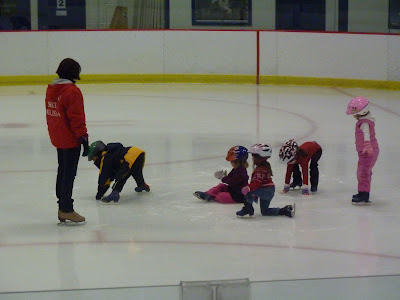 Then they practiced getting up after they fall down. Cecilia had no problem but Felicity, being the smallest in the class, struggled to get back up. She kept trying though and did do it a few times though she did get a bit discouraged. 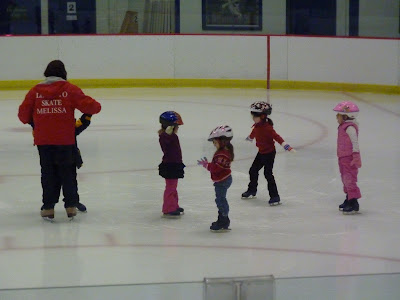 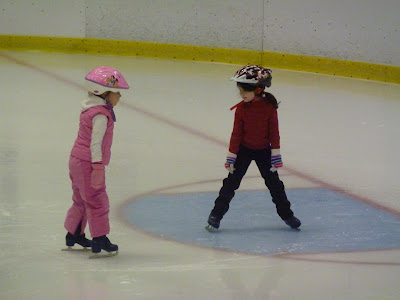 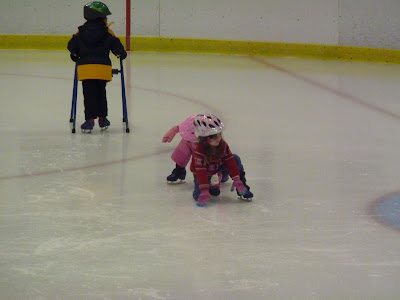 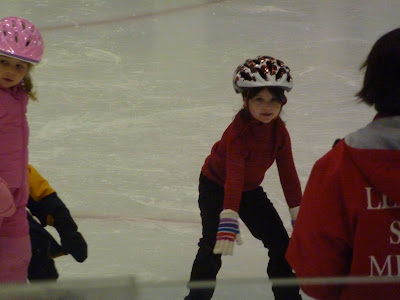 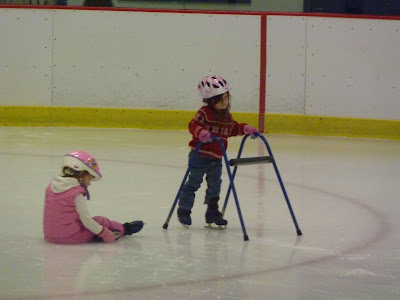 One little boy had such a hard time keeping his balance he was falling down constantly, sometimes taking down other kids in the process. You had to admire his persistence though. He just kept getting back up and trying again. The teacher gave him a "walker" to help him practice his balance. Felicity likewise used one the second half of the class to practice walking across the ice.

Both girls did really well. I do think the balance of it came more easily to Cecilia but Cecilia is also bigger and older than Felicity. Every time Cecilia fell, or was knocked down, she just got back up and kept trying. She was very eager to do everything her teacher told her to do. Felicity, bless her heart, is the smallest in the class and struggled more than Cecilia but she never cried and she never gave up. I was very proud of both of them.

If they like it and want to continue, there is another session following this one. If they don't want to continue, they can try something else. My hope is that, by the time they are tweens or so, they will have tried enough activities that they will have a good idea what they like and what they don't like and be able to pursue something they really enjoy through their teen years.
Posted by Katherine at 3:31 PM