We live near two Franciscan Monasteries. So I thought, well, gee, maybe they are doing something special on the feast of their founder St. Francis such that it would provide a good excuse for us to get out.

Turns out they had reallocated their blessing of the animals to Sunday. The only event listed at either monastery for the entire day was Mass. Certainly not a minor thing, but not particular to the feast either.

Personally I loved Cecilia's suggestion for celebrating the patron of animals: Go to the Zoo! But, alas, 4 kids, some with colds, by myself at the zoo on a school day was more than I was willing to chew.

So we did the only other thing I could think of.

My brother's dog lives upstairs with my parents. Every day she is blockaded into my parents' bedroom and the laundry room by herself. We actually keep a baby gate in front of the bottom of the stairs to keep the girls from going upstairs at will. Elizabeth would go up and down visiting Alicia all day if we let her. So, small as it was, I thought a little St. Francis treat would be bringing Alicia downstairs for the afternoon. The girls would get to visit her in their play area and Alicia would have company.

Now, Alicia, is a senior dog. With digestive issues. So treats were out of the question. Alicia is a senior dog. So playing is a bit of a minimum. And, frankly, she was bathed and groomed not long ago and I wasn't up to supervising a dog bath. But we took turns with two brushes brushing her. 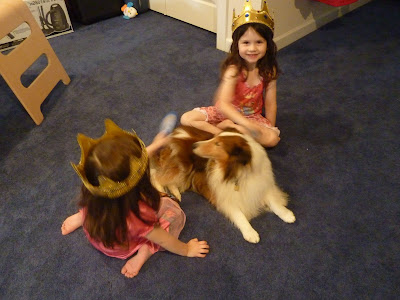 Unfortunately, the workmen outside (yeah, will still get to that post later) kept her anxious, barking, and even growling through her visit.

After an hour even Cecilia said, "Mom, can you take Alicia back upstairs now?"

So, um, yeah ... won't be doing that again at least until there are no more workmen outside.
Posted by Katherine at 4:40 PM