It is strange somehow to look back on a year. How do you reflect on a year of your life? What value can you place on it? The highs. The lows. It makes me think of a song I like from the musical Rent. (I do not recommend or condone the musical as a whole, but I love the song, "Seasons of Love."

525,600 minutes. So many minutes gone. Never to be gotten again. But it doesn't really matter that they are gone. What matters is what was done with them.

For us, 2011 meant we had our first child turn 5 years old, the arrival of our beautiful daughter Teresa, the graduation of both of my brothers from college, a memorable trip to Disney World with the whole family, Elizabeth turning 2, another move, the beginning of our first formal and state-recognized home school year, joining our first homeschool cooperative, the completion of Kindergarten and the beginning of 1st Grade, Felicity turning 4, our girls' first Nativity Pageant and Teresa's First Easter and Christmas. From birth to school to moving and trips, it has been a busy year but a good one.

Jen spent last Christmas break putting together a Saint Generator to help people choose a patron for the coming year. The Saint it chose for me? Saint Claude de la Colombiere. Now, I'm familiar with many Saints, but I reacted with, "Okay, who?" and had to look him up. He was a French noble (born 1641) who became a Jesuit priest, promoted devotion to the Sacred Heart of Jesus and was spiritual director to St. Margaret Mary of Alocoque. Due to anti-Catholicism, he was imprisoned, tortured and exiled from England. He is considered a "dry" martyr, having suffered every abuse for the faith except death. Having read a bit more about him, I rather like him. I can't help but wonder if he is my patron for the year though because of his patronage of toy makers, as we seem to patron toy makers in our own way. :) Of him, JP II said, "In a period of contrasts between the fervor of some and the indifference or impiety of many, here is a devotion centered on the humility of Christ, on his presence, on his love of mercy and on forgiveness. Devotion to the Heart of Christ would be a source of balance and spiritual strengthening for Christian communities so often faced with increasing unbelief over the coming centuries." Certainly seems a fitting Saint for our times. Personally what I like most about him is that he converted many people simply through the example of his holy life. In these times, changing laws and policies is not easy and not necessarily the work of someone like me. But changing hearts through a Christ-like example - that I can (try to) do!


For the past two years I have also chosen a word for the year. I always struggle to chose a word. It is that fear-I-won't-follow-through kind of thing. The previous years I chose Queenship and Eucharist. Hard to top Eucharist, but every year is different. For this year, I am choosing two words that go together but aren't really complete without each other: Quiet and Listen, and I choose them for a few reasons.


First and foremost, with the intention of striving to enter deeper into prayer, into the quiet and listening. Second, I have four young children and quiet may be a word I say often but certainly describes very little around our house and, due to its scarcity, does become quite the prize to strive after. Third, to quiet myself to listen better to others - listen better to their needs and be an attentive soul when they need one. And fourth, is to say less. In Michael Card's and John Michael Talbot's "The Final Word," they sing, "You and me, we use so very many clumsy words. The noise of what we often say is not worth being heard. When the Father's Wisdom wanted to communicate His love, He spoke it in one final perfect Word." Instead of spewing words thoughtlessly, my intention is to make what I do say more worth hearing.


I have never been a big fan of New Years' resolutions. My liturgical year began in November. My Lent offerings begin in February. And I am constantly in need of new resolutions, so January 1 is more like my Christmas resolutions until i re-evaluate in February and make Lenten ones. But one I will make is to try to say the Divine Office again. I do so love my breviary. And Melanie's post about Daria's post and post makes me want to try it again. I love praying the psalms but have always become very frustrated over striving to say it amidst the chaos that ensues with children who get up before 7, sometimes before 6! But I will give it a go and just put my guardian angel to work. :)


"My only followup is to make this suggestion to Melanie and all moms (and dads) who put down their breviary to attend to Life, only to see it sitting there several hours later and realize that one never got past the second psalm of the hour,and now it's time for the next hours to be prayed.  Don't try to go back and finish that earlier hour.  Imagine that your guardian angel finished it for you, since that is in fact what he did.   Your guardian angel, and the millions of believers all over the world. Sort of like when you get up  at mass to take a child to the bathroom. You wouldn't feel you had to go back and recite the prayer's you'd missed to "catch up" to the others. No, because they prayed the mass for you. That's  called the communion of saints."


My second resolution will be one I made in 2009 and kept - until Elizabeth was born in June - and it has simply been hit and miss since. But now that I have a whole monastery of Franciscans up the road, I'm going to try to get to Confession once a month. 5 minutes up the road. No problem right? I still better put it in my calendar.


Finally, it would not be New Year's Day without wishing my wonderful husband, James, a Happy Anniversary. He currently has a cold and has barely slept but hopefully the day and year will only get better. He is truly my other half and I could not imagine my life without him. Seven years strong, many more to come. I love you, James! Thank you for everything! 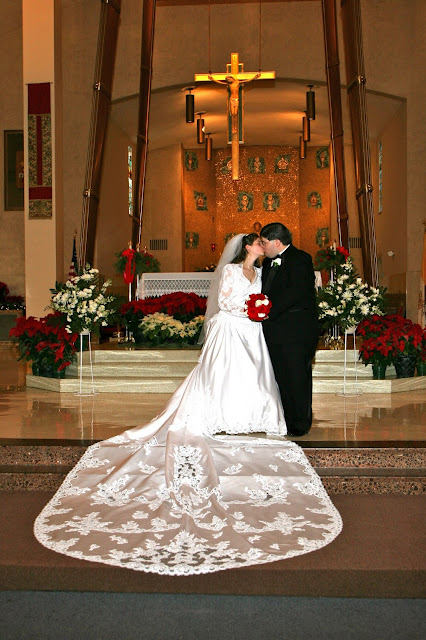 Posted by Katherine at 1:39 PM