Recently, the Freedom From Religion Federation printed an ad in the New York Times. 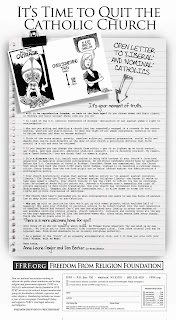 Now, there are, of course, so many errors in this ad it is ridiculous and I really don't need to go in to why the RCC has not declared war on women nor is it seeking to ban contraception. But I thought it was interesting that they call on "liberal and nominal Catholics" to leave the Church. They even say that to think the Church can be changed on issues such as birth control, gay marriage and embryonic stem-cell research from the inside is to delude one's self.


I'm happy to say they are right on that point. The Church isn't going to bend on any of those issues. That is one of the things we faithful Catholics LOVE about our Church. She is rock solid. She doesn't change her mind willy nilly just because something is popular. She has lived through it all. She knows better. And she answers to a higher authority.


See, unlike a club, the RCC believes in Truth and an unchanging one at that and she will stand by what she believes and professes to be true regardless. Our Church was built on the blood of martyrs unwilling to surrender their faith and there are Catholics still dying today for their faith because they hold so dearly that universal truth. It is why we are would rather accept persecution than denounce our faith. When it comes to faith and morals, there is no picking and choosing.


As Tom Crowe wrote over at CatholicVote.org:


The thing about being Catholic is that we have a defined set of beliefs that are non-negotiable on matters of faith and morals. That set of beliefs is defined and taught by an established hierarchy, unified in the bishop of Rome. People of other faiths are able to seek a denomination or congregation that fits the set of truths and values that they prefer. People with no faith are free to be complete freelancers on morality and values. Those options are not open to those who would be Catholic because to be Catholic means to accept the Church’s competency to teach infallibly. There certainly are areas where people of faith can legitimately differ, but the nitty gritty of sexual ethics is not among them.

The Catholic Church is not a club you can drop this week and pick up the next. It is not a curriculum or philosophy that you can take up this tenet and leave that one. And to treat it as such is to deceive yourself into claiming to be something you're not and denying yourself the fulfillment of what it would mean if you were. To be a Catholic is a choice and it is a choice that, if you mean it, will effect every aspect of your life. Faith is not something you can take up on Sunday and put on the shelf on Monday. It has to permeate every aspect of your life or it isn't real.

So it is no wonder that the FFRF is calling on those who do not embrace all that it means to be Catholic to leave the church. In many ways, they are only telling them to finally be honest. Either you are Catholic or you aren't. You cannot be "sort of" Catholic. That is like being "kinda" pregnant.

Now, I certainly would prefer that "liberal and nominal Catholics," rather than leave the Church, consider just what the Church teaches and why and become fully and truly Catholic. But the FFRF is right in that things are coming to a head. Either you stand with the RCC or you abandon her.
Posted by Katherine at 8:06 AM