We drove back east through Louisiana, Mississippi and stopped for the night just outside of Birmingham, Alabama.

Unfortunately the night in our hotel stay that night was less than satisfactory. The hotel itself was fine and the staff nice. Apart from the shoddy carpet, the room was nice. But it was just one of those times and places you got the feeling something wasn't quite right. Everything seemed fine until just before 3am. Felicity woke me up trying to get into bed with me saying she was scared. I tried to reassure her that everything was fine and sent her back to her bed (which she was sharing with Cecilia and Elizabeth). Normally I would have offered to say the Guardian Angel prayer with her and been a bit more comforting, but she had woken me from a nightmare and I was still a bit disoriented. For only the second time in my life, I had dreamt about abortion. I had dreamt that I was in a strange hospital and some doctor I didn't know was telling me that there were some irregularities in my test results. He said something seemed to be wrong with the baby. He said they wanted to run a second test and maybe the spots/splotches had gone away (I was thinking sonogram here) but gave me the "doctors have seen these things before" line and I just knew if those "irregularities" were still there this casual doctor was going to give me "advice" I didn't want to hear. Felicity woke me up just as I realized not only could something be wrong with the baby but I might have to fight for my baby's life. Hence, I didn't respond quite to her nightmare as well as I should have.

Anyway, Felicity went back to bed easily enough but within 5 or 10 minutes of that Teresa began crying. Hysterically. Nonstop. Uncontrollably. When she does cry, we usually wait a little bit to give her a chance to calm herself. It wasn't too long though before James looked at me and said, "Should I go get her?" I said sure. He didn't tell me until later that his quick incentive to get her was because when he looked over at her, he had thought he saw a shadow standing by her and thought it was me. Until he realized I was still laying beside him. We brought Teresa to our bed and she calmed immediately between us. It took until after 4am to get her back asleep in her pack 'n play. Afterwards, I finally fell back asleep only to have another nightmare. And I cannot even shrug it off as some continuation of the first one. I won't go into details on this one, but it involved completely different themes, issues and people but was likewise upsetting.

While I've read several books on demonic activity and the like, questioning any spiritual activity in a place is not something that generally occurs to me. The fact I had a nightmare about abortion though immediately set off a red flag for me. I've only had one other dream on that subject ever - it was the only time in my married life I've woken James up for myself during the night and afterwards I had the whole house blessed. But when I consider my nightmares, Teresa's sudden hysterics, Felicity's nightmare and James' experience I cannot automatically assume it all had to be a coincidence. Maybe but maybe not. So it was with great interest when Melanie asked me via Facebook if our hotel room had been an end room. It had. On the ground floor. Past our room was only a stairwell and then a back door to the hotel. I asked how she knew that and why it could make a difference. She said, "I can't remember where I saw it; but I read somewhere that criminals-- murders, rapists, drug dealers, etc-- and occultists tend to choose the room at the end because there is only one common wall shared with another room instead of two and thus they are less likely to be disturbed. Also perhaps closer access to the stairs would make it easier for people to come and go without being seen."I had never heard of such an idea but it makes sense. She hadn't even known about our room's easy access from the hotel's back door. Melanie lived once in Salem and so the subject of evil activity is not new to her. Before we left the hotel, James said, "You never know what some people could have done in places to invite evil." That is for darn sure.

By the way, we are still dealing with the effects of that night. Teresa had slept fine the whole time in Texas. But since Birmingham, her nights have only gotten worse until she completely refuses to sleep anywhere but in bed with us. She will cry until she is hoarse and throw everything out of her crib until only the sheet is left. She used to go to sleep on her own, quietly. Now we can't even get her in her crib and even sleeping with us she has randomly broken out crying in her sleep.

Until last night. Yesterday we went to a friend's baby's baptism and I took the opportunity to refill our two containers of Holy Water. I sprinkled it liberally around our bedroom and around her crib. She slept in our bed all night but she slept soundlessly for over 12 hours. It is the best night she has had since Birmingham. Coincidence? I'll leave that one open.

Anyway... we then drove up to the Shrine of the Blessed Sacrament 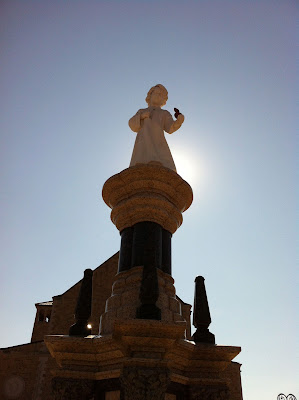 Teresa loved roaming in the courtyard. 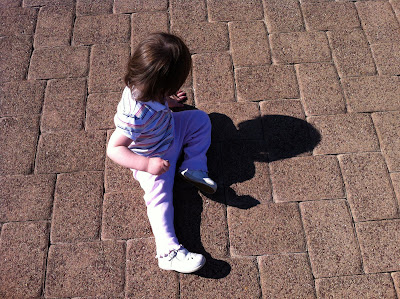 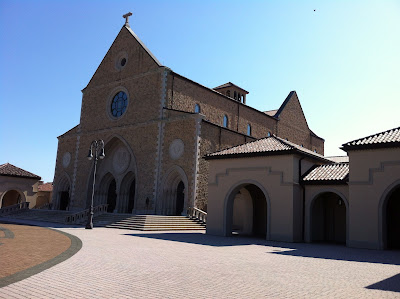 They have just about the bloodiest crucifix I've ever seen. Personally I didn't like it. Mel Gibson's bloodied Christ is easier for me to approach than this one. I was a little worried how the girls would handle seeing it but fortunately it didn't seem to phase them. 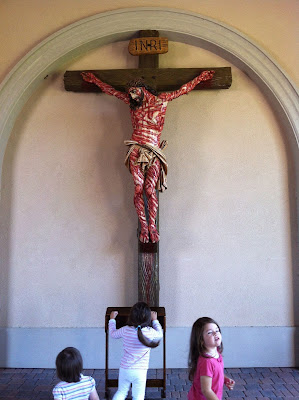 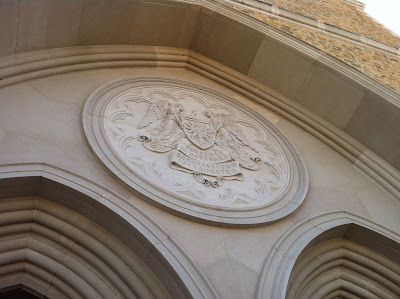 Mass was said in the lower chapel by Fr. Miguel Marie. He is one of my two favorite priests at EWTN and his homily was good though I thought a bit more could have been done with it. It was a bit hard for me to pay attention though. The long car drives without long breaks was wearing on the girls and their behavior at Mass was among the worse I've seen. Unfortunately pictures are forbidden in the church, so I have no pictures of the inside, and the gift shop was closed for Sunday.   :(

After Mass we drove up to northern Georgia and went to Rock City. We walked through a sort of rock garden but with massive rocks and great chasms between them. Over stony bridges and through narrow caves, it was a nice break from the car and parts of it were really very pretty. Anyone could easily imagine gnomes and fairies finding a home there. You can see the narrowest walkway behind Cecilia. Needless to say we did not bring the stroller. 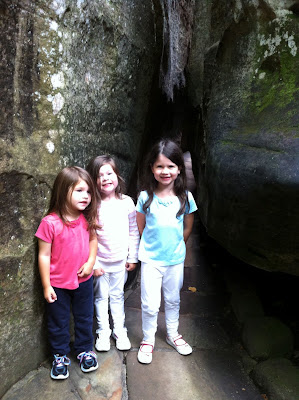 At the end of the trail, over the stony bridge, is a cliff from which you can have a drink, eat lunch and see seven states. From left to right it is Tennessee, Kentucky, North Carolina, South Carolina, Georgia and Alabama. 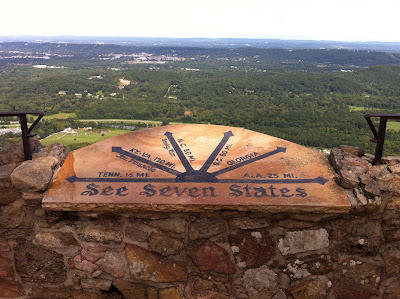 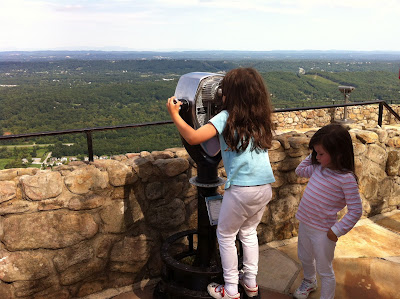 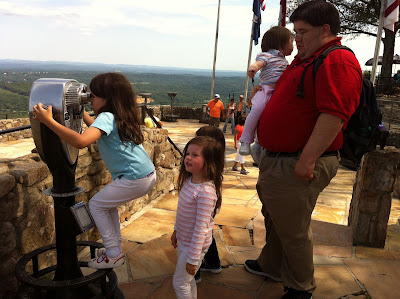 Along side the stony bridge is a lovely waterfall. 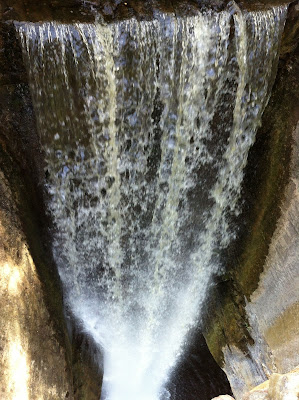 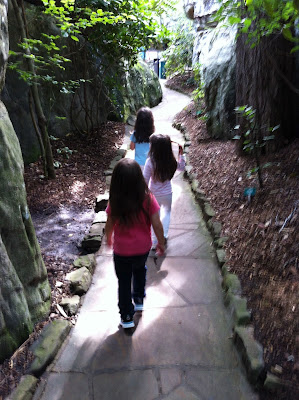 We stayed overnight just outside Chattanooga and pushed home from there. It was a long trip with a lot of driving but I think everyone enjoyed it and it was well worth it. Now to regroup and get back to school :)
Posted by Katherine at 3:19 PM