Year of Faith: God The Creator 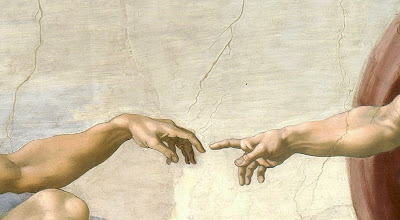 I believe in one God.

We cannot look around at the world, study a cell or see a baby being born and declare the world to be an accident. We cannot observe gravity and the revolutions of the planets and the complexity of nature and declare the laws of the universe arbitrary. Science explains the universe as far back as the Big Bang, yet we cannot explain before that, we cannot explain existence itself. To explain existence, we must reach a reality which exists through itself, a being whose very nature is to be. This is what we mean by God.

Cardinal Ratzinger, in his book Introduction to Christianity, observed that the material world is marked completely through by intelligibility. That is, the world has a structure that makes it knowable to an enquiring mind. No science could exist without believing this basic principle. If the world wasn't knowable, no scientist, no doctor could practice their craft since there would be no laws, no structure, no intelligibility to the world. Ratzinger concludes that the only satisfying explanation for this is some great intelligence, some mind that has thought the universe into being and he quotes Albert Einstein who said, "In the laws of nature, a mind so superior is revealed that in comparison to it, our minds count as something worthless."

In Exodus, when Moses asks God who He is, God replies, "I Am who I Am." God is not the biggest thing, or the greatest thing... God is. "His divine name is mysterious just as God is mystery. It is at once a name revealed and something like the refusal of a name, and hence it better expresses God as what he is - infinitely above everything that we can understand or say." (CCC 206) God answers that his name is "to be," "the one who is."

God is essentially mystery and it is because of this that belief in God requires a leap of faith. St. Augustine said, "If you understand, that isn't God." Many of the words we use to describe God really just describe what God is not. Eternal means God is outside of time. Infinite means God can't be limited. Immaterial and immutable means God is not like any of the changeable things we see and know. And Omnipotence means that God cannot be hidden from. We don't know what God is, we know what God is not. We cannot categorize God.

But to attempt to explain what we mean by, "God," we describe Him as omniscient. Omniscience means God has known everything into being. God stands under all reality and hence is inescapably present to it. As God is the cause of existence, all things exist in and through God. But God does not force his will onto some substance apart from Himself but rather creates everything out of Himself. In other words, everything is benevolently created by God from nothing. And, as all things are created by God and exist through God, all things are connected to each other through God. Hence, we glimpse God through creation, the things that God has brought into existence.

Thus far, the Catholic God is the same as the Judaic and not much different than the Islamic. The Catholic God though is one but is, in His unity, a communion. And this belief comes from Scripture, from Jesus Himself. Jesus says He is sent by another, the Father, yet He spoke and acted as God Himself. And He further promises, with the Father, to send another Advocate to lead the Church. How do you reconcile the belief that there is only one God and yet within God, three persons? St. Augustine compared it to the human mind. If you ask yourself, "What was I doing?" you are making yourself both the subject and the object of the same question. You haven't divided into two people, but there are two dimensions to your own thought. And, as you reflect and answer yourself you come to know yourself better and so love yourself more. Asking leads you to self-knowledge and together they lead to self-love. This was an image Augustine used to help explain how there can be these three distinct parts of one whole. But grasping one is three and three is one is very difficult for the human mind. The Trinity is really a mystery. If you think you know it, you don't because it is beyond our comprehension. At best we can conjure images to help us glimpse the Trinity, the image of the family being a common one: The husband loves the wife, the wife loves the husband and the fruits of their love is children, yet they are one family. St. Patrick's famous shamrock is another image to help us grasp this, but, in the end, the fact that God is one and three requires faith.

God is not someone we can hide from or run away from but He also isn't someone we can grasp or control. Rather, He is that deepest part of ourselves, that deepest part of all that is. He is what connects us to each other and all that is. He is the God who created us in generous, infinite love so that we might love Him back. He is the one whom we are created to fall in love with.


For you formed my inward parts, you knitted me together in my mother's womb.
I praise you, for I am wondrously made. Wonderful are your works!
You know me right well; my frame was not hidden from you, when I was being made in secret, intricately wrought in the depths of the earth.
Your eyes beheld my unformed substance; in your book were written, every one of them, the days that were formed for me, when as yet there was none of them.
How precious to me are your thoughts, O God! How vast is the sum of them!
If I would count them, they are more than the sand. When I awake, I am still with you.
Psalms 139:13-18

Human beings ask many questions. But at the heart of it all is the question of the meaning of life and what it is all about. For the Catholic, the answer is love for love is what God is.

Questions to reflect on:
Who or what do you worship?

It can be easy to make gods of many things, such a career or a human being. How might someone or something else be taking the place of God in your life?

What can you do to deepen your relationship with God?


Let nothing trouble you
Let nothing frighten you
Everything passes
God never changes
Patience obtains all
Whoever has God wants for nothing
God alone is enough.
~St. Teresa of Avila


Sources: Catholicism, Catechism of the Catholic Chuch
Posted by Katherine at 8:12 PM

Email ThisBlogThis!Share to TwitterShare to FacebookShare to Pinterest
Labels: Church, Year of Faith