Cecilia's Science lesson last week was about the planet Earth, so for our lab, we used play-doh to build a model of the Earth from the core out and then cut it down the middle to see the layers. 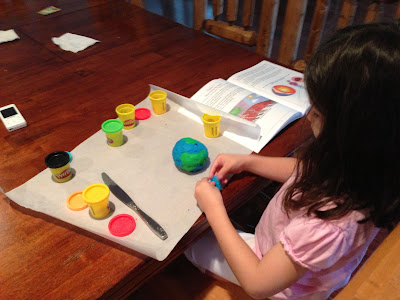 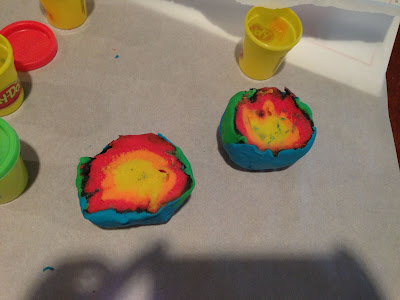 Overall it worked well. Next time I would try to have her saw the play-doh rather than just push straight down to avoid the bit of disfigurement, but she enjoyed it and had play-doh to have fun with afterwards!

It is funny but even though Cecilia is only in 2nd grade and Felicity is in Kindergarten, I can already see differences in their learning abilities.

In Kindergarten, Cecilia ran right through her numbers and counting book. She remembered her numbers and had no difficulties with counting up to 100. However, she struggled a lot to put the sounds of letters together to hear the words. I struggled to understand what I was doing wrong and we wound up repeating lessons until she got the words right.

In Kindergarten, Felicity is the exact opposite. She almost naturally hears the letter sounds and, while only on lesson 30 out of 100 in the book, is already nailing words like "cat" "can" "in" "on" "mud""the"and the doesn't struggle much with the other words either. On the other hand, she struggles with the numbers. She has some mental block against the number 13 and always skips it and seems to struggle with the idea of counting past 19.

On the one hand, it is just really neat to see the different strengths and difficulties in their schooling. It also drives home the idea that just because a child is struggling to learn something doesn't necessarily mean their teacher is doing something wrong but rather it just may take a bit more time and patience and creativity for the child to "get it."

It took a while, but we finally cut open our pumpkin. Cecilia helped me separate out the seeds, which I hope to roast soon. Then Teresa helped me empty the meat of the pumpkin out which I'll save for our pie in a couple of weeks. 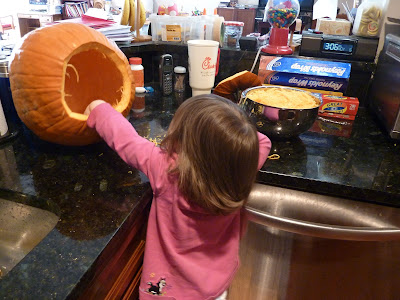 I asked the girls what we should carve. Unfortunately I had to refuse Felicity's request for a unicorn... I'm just not up for that kind of carving this year. Other suggestions were hearts and the name of Jesus. I attempted to combine the two by doing the Sacred Heart and the Immaculate Heart with a regular heart between and rays coming from them. Cecilia actually helped carve all by herself... maybe next year she can have her own pumpkin (when I'm not 8 months pregnant). 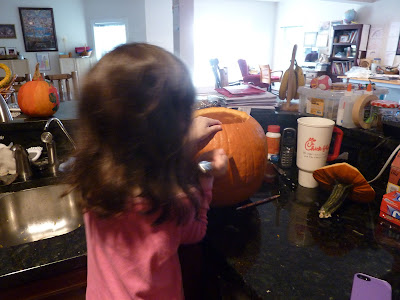 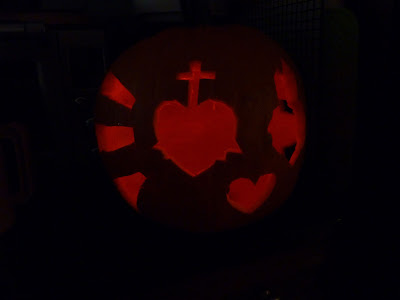 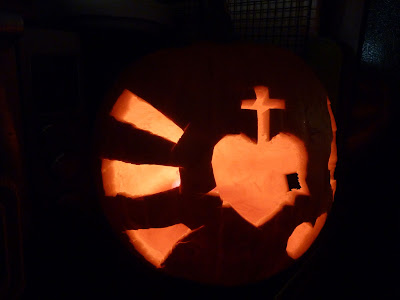 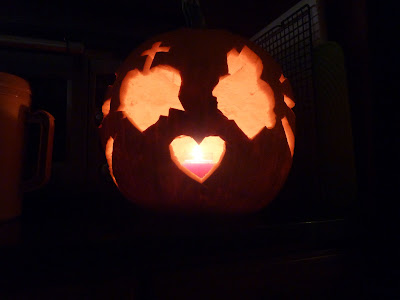 On Monday I had an OB appt. I was 31 weeks. Everything looked good and she said she'd see me again in 2 weeks. Now, with a minimum 35 minute drive each way, each appointment is a 1 1/2 to 2 hour excursion driving into Baltimore, so in terms of time, gas, and interruption of school, the fewer appointments, the better. So I asked why in 2 weeks. She said "because it's the second trimester." I asked if there were any tests in 2 weeks. She said no and asked when I wanted to come back. I told her I was hoping to make it to December before I had to come in again. I mean, as long as I feel the baby moving, is there really any need to interrupt school and spend time and gas for someone to tell me I weigh more and look bigger? Fortunately I have a good doc and she said it was no problem. So my next appointment isn't until December 7th, when I'll be 35 1/2 weeks. Yeah for good, reasonable doctors!!!

On Tuesday, we did about an hour of school, and then I got all the kids dressed and took all of them with me to vote. 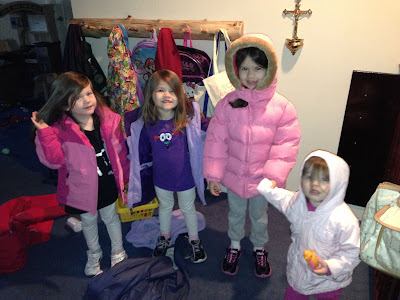 The girls were good and the line was short. We got there around 10am and there were about half a dozen people ahead of us in line. So it didn't take long before I was stating my name and address to an older woman. She wasn't the first one at the polling place to tell me I "have my hands full" but that one never bothers me much except for how often I hear it (it gets old). I also got a couple of "are they all yours?" as though I found them in the parking lot and just picked them up as a hobby or something, but I always find that one more weird than annoying. This lady though, boy, she was a number. She began with the old "wait until they are teenagers" line, which I've heard before but not often, but at least my kids didn't know what she was talking about. Then she felt it necessary to add, "I have 6 sons and I'd take 6 boys over 3 girls any day!" I informed her that I had heard such statements both ways with regards to preferences of gender but was stunned she felt the need to say that sons were better than daughters in front of my kids. Of course, I'm also afraid to know how she might have reacted had she been able to count and realized I had not 3 girls, but 4!

As we are rapidly approaching the arrival of baby #5, the question of space in our car has become an issue in terms of fitting 5 car seats. Through the generous help of my parents and a van that has retained a nice value, we have secured our future car, which we should have sometime next week. And we'll actually be able to fit passengers now too! I'll get up some pictures once we have it. :)

It turned out there wasn't much point to my voting. Almost nothing and no one I voted for won, except one thing and that would have passed anyway, but the girls did get to see how we vote. They were disappointed they couldn't help push the screen buttons though.

Fortunately for us all, Obama is only President and not God. I was praying Tuesday night as we watched the results come in trying to understand how so many Americans could be so stupid and so lazy as to vote for abortion, birth control and "gay marriage" when it means a dying economy and the bankruptcy of our country. But it seems many people vote with their passions rather than their brains. Short of a miracle, American cann

ot sustain herself along her current path... not in population, not in funds... I don't know that I have any hope left for my country.

But it made me wonder, if perhaps, I am not supposed to lose hope for my country. After all, our hope is not in America, but in God. And it is against the bigotry of the current administration that the American Roman Catholic Church has finally begun to stand up, to come together and to speak out. Perhaps God wanted Obama re-elected because, just as it was under Pharaoh that God brought the Israelites out of Egypt, it is against adversity that God draws us closer to the Truth, closer to each other, and closer to Him. We may yet become unwelcome exiles in our own land but if that be the will of God, so be it.

It may be time to ask ourselves what we believe, who we follow and where our hope and faith lies. Obama is President, but not God and as for me and my house, we will follow the Lord.


Despite the OB appt, voting, and driving to and from Pennsylvania to find a car, Cecilia managed to finish all her schoolwork for the week. I'm a bit behind for Felicity, but my only goal is to be all caught up by next Friday before Felicity's birthday party and our week off for Thanksgiving.


So, tomorrow we are going to the movies to see Wreck-It Ralph! We plan to have a pretty relaxing and enjoyable weekend and I hope yours is the same!

Quick Takes Sponsored by Jen at Conversion Diary.
Posted by Katherine at 3:10 PM