Year of Faith: Jesus, The Incarnation

In my October Post, God the Creator, I wrote about the Catholic believe in one God, the Creator of all things and how that one God is at the same time a unity of three persons. My November and December posts will focus on the second person, Jesus, first focusing on the Incarnation when God became man and later focusing on the Crucifixion and Resurrection when the God-Man redeemed humanity.

I believe in Jesus Christ, His only Son, our Lord, who was conceived by the Holy Spirit, born of the Virgin Mary.

The Catholic God creates nothing bad. Being goodness itself it is impossible for anything not good to come from God. But that doesn't mean everything must remain in God and therefore good. God gave humanity the gift of free will, the opportunity to choose God or reject God thus enabling a person the ability to give God something in return. But, as anyone can see, humanity rejected God and fell from His perfect goodness. Many people struggle with the question of evil and how evil and a good God can co-exist. In a sense, they don't. Evil itself doesn't exist except as a privation of God and His goodness.

After everything God gave humanity, for humanity to reject God, it would be perfectly justifiable for God to leave humanity in the evil it chose for itself, but He didn't. He promised to send a Savior to right the relationship between people and God. For thousands of years people waited for the Savior but no one could have anticipated just what kind of Savior God would send.

No one ever dreamed that God would send Himself.

The key claim of Christianity is that God became human. As Fr. Barron put it in his Catholicism series, Mohammed said there is a revelation I've had and I want you to know it. Buddha would say there is a way I found and I want to share it. Jesus doesn't ask what people think of his teaching but who people say He is. Throughout the Gospels, Jesus speaks and acts in the very person of God. In John 10:30, Jesus himself says, "The Father and I are one," and in the Gospel of Luke, Jesus says that unless we love Him, more than everything, we are not worthy of Him. Jesus insists that we make a choice with regards to who we say He is.


I am trying here to prevent anyone saying the really foolish thing that people often say about Him: I’m ready to accept Jesus as a great moral teacher, but I don’t accept his claim to be God. That is the one thing we must not say. A man who was merely a man and said the sort of things Jesus said would not be a great moral teacher. He would either be a lunatic — on the level with the man who says he is a poached egg — or else he would be the Devil of Hell. You must make your choice. Either this man was, and is, the Son of God, or else a madman or something worse. You can shut him up for a fool, you can spit at him and kill him as a demon or you can fall at his feet and call him Lord and God, but let us not come with any patronising nonsense about his being a great human teacher. He has not left that open to us. He did not intend to.

It is not logically possible to decide Jesus was a good guy, or a nice moral teacher, or even a prophet, but deny He is God. And if we say He is God, our life is changed forever. 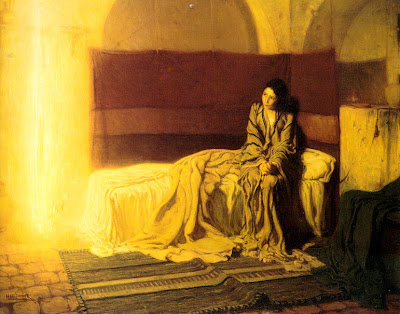 Scripture tells us that an angel, or messenger, from God was sent to a young virgin girl in Israel named Mary. The angel addresses her, "Hail, favored one! The Lord is with you," and goes on to say "Do not be afraid, Mary, for you have found favor with God. Behold, you will conceive in your womb and bear a son, and you shall name him Jesus. He will be great and will be called Son of the Most High, and the Lord God will give him the throne of David his father, and he will rule over the house of Jacob forever, and of his kingdom there will be no end." (Luke 1:26-33) In most mythology, when the gods jump into human affairs, it is done so violently and when they create a child with a human being, it is usually done so through rape. Yet here God does not force Himself but respects Mary's dignity and freedom. He courts her with praise and the promise of the coming Messiah if she will accept His invitation. When Mary asks how this would be accomplished, the angel says, "The holy Spirit will come upon you, and the power of the Most High will overshadow you. Therefore the child to be born will be called holy, the Son of God." (Luke 1:34-35) And then the angel waits for her consent.

God never forces Himself on anyone and it is no different here. But just as when a husband and wife come together in self-gift and joyful surrender to each other to create a child, God invites Mary and she joyfully surrenders herself to Him. The third person of the Trinity, the Holy Spirit, comes upon her and the second person of the Trinity, the Son, enters into her womb conceived as a human being.

And Joseph too went up from Galilee from the town of Nazareth to Judea, to the city of David that is called Bethlehem, because he was of the house and family of David,to be enrolled with Mary, his betrothed, who was with child. While they were there, the time came for her to have her child, and she gave birth to her firstborn son. She wrapped him in swaddling clothes and laid him in a manger, because there was no room for them in the inn. Now there were shepherds in that region living in the fields and keeping the night watch over their flock. The angel of the Lord appeared to them and the glory of the Lord shone around them, and they were struck with great fear. The angel said to them, “Do not be afraid; for behold, I proclaim to you good news of great joy that will be for all the people. For today in the city of David a savior has been born for you who is Messiah and Lord. And this will be a sign for you: you will find an infant wrapped in swaddling clothes and lying in a manger.” And suddenly there was a multitude of the heavenly host with the angel, praising God and saying: “Glory to God in the highest and on earth peace to those on whom his favor rests.” (Luke 2:4-14)


This was a coming of the Messiah of which no one could have imagined or dreamed. To suggest before this that God would become human would have been a joke, a poke at the impossible, a laugh at the suggestion that opposites could become the same. In many ways, Christmas is a joke that is marvelously on us as God is revealed as human, as the invisible infinite becomes visible tangible, as a virgin gives birth, as the Savior is born in the small, obscure town of Bethlehem, as a King is born in a stable and placed in a manger. It is the divine equivalent of the beau who surprises his beloved with a gift beyond what she could have imagined. It is the ultimate gift, the gift of one's self.

At the Annunciation, when the angel asks Mary's consent, God becomes human. At Christmas, when Jesus is born, God presents Himself to us in the most vulnerable, most gentle, most humble, and most approachable way possible - as a newborn baby; not to be feared and fled from but appealing to our deepest humanity, drawing us to Himself. 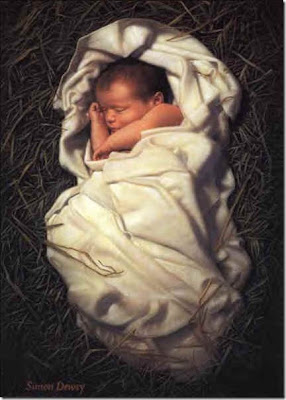 Have this mind among yourselves, which was in Christ Jesus, who, though he was in the form of God, did not count equality with God a thing to be grasped, but emptied himself, taking the form of a servant, being born in the likeness of men. (Philippians 2:5-7)

Jesus empties Himself becoming one of us so that we are able to approach Him, relate to Him, come to Him. Jesus awaits our consent, our belief, but the answer is always entirely up to us.
Posted by Katherine at 11:20 AM