It has been a very long week...

1. James was out of town for two days. So, of course, the girls chose the full day he was gone to simply have a bad day. Within a span of less than 36 hours, Teresa wrote all over my keyboard (fortunately, in pencil), Teresa dunked two board game pieces into marinara sauce, Teresa walked up to me with two fistfuls of poop, Teresa threw Cecilia's sneaker in the toilet... and lest you think the bad day was really just due to Teresa, the other three made up their end with bickering and whining. And even when things weren't done on purpose they went wrong... just before bed Elizabeth accidentally slammed Cecilia's finger in a door.

2. So it was with great relief we got Daddy back. But last Saturday, Elizabeth came down with a bad cough and fever. By Monday Teresa's nose was running like crazy and Elizabeth's fever was up to 104.  By Wednesday Elizabeth seemed to be improving but Cecilia was hit and began throwing up (she has the most sensitive stomach on the planet!). Then, Wednesday night, Elizabeth regressed getting back her fever and was up most of the night complaining her ear hurt. Thursday James cancelled his last day of classes and stayed home with a vomiting Cecilia while I took Elizabeth back to the doctor who confirmed she had an ear infection.

3. By this morning, Cecilia, Felicity and Elizabeth all have improved and seem on the mend. Teresa is the only one that seems the same and we are keeping an eye on her to see where her virus goes. James and I are also now sick. But I did have my 35 week OB appointment and all looks well!

But the week wasn't without its highs...

4. On Sunday, at their American Heritage Girls meeting, Felicity got to be in the color guard! 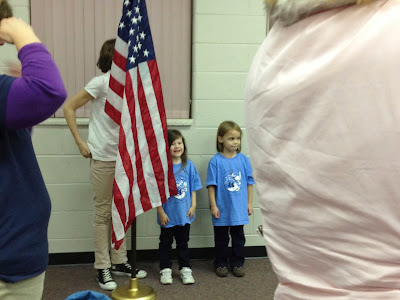 5. Teresa certainly gets into trouble more than her share, but sometimes she just cracks me up. And you thought your kids grew up too fast...! 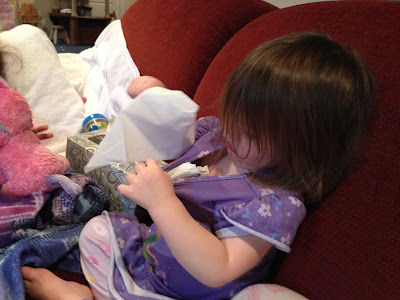 (I swear she does not get the idea of stuffing tissues in her top from me!!!)


6. I have a hard time keeping up with her. Clearly I put the diapers box in a bad place considering the bassinet is up for the new baby... 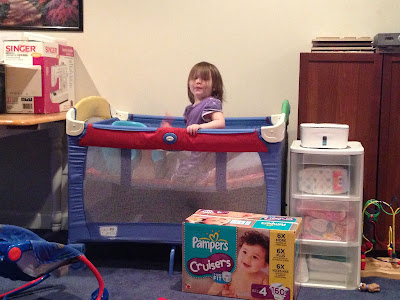 7. Needless to say, none of the kids will be going to Mass for the Solemnity of the Immaculate Conception... after the week they've had, they would never handle back to back masses well and, frankly, I think James and I will each benefit more from a quiet solo Mass as we tag team tomorrow's Masses. Don't forget to go to Mass for the Immaculate Conception and then again for your Sunday obligation.... God is waiting for you! :)