Year of Faith: Jesus, The Savior

When Jesus was born in Bethlehem of Judea, in the days of King Herod, behold, magi from the east arrived in Jerusalem, saying, “Where is the newborn king of the Jews? We saw his star at its rising and have come to do him homage.” And behold, the star that they had seen at its rising preceded them, until it came and stopped over the place where the child was. They were overjoyed at seeing the star, and on entering the house they saw the child with Mary his mother. They prostrated themselves and did him homage. Then they opened their treasures and offered him gifts of gold, frankincense, and myrrh. (Matthew 2:1-2, 9-11)

Even at His birth, Jesus' kingship (gold), priesthood (frankincense) and sacrificial death (myrrh) are recognized and foretold in the gifts of the magi.

It is a strange thing to consider. When we see a baby just born, there is so much joy. We are so happy to see that little life, that new person and imagine all the potential for his or her life. Yet, when Jesus was born, his death was already overshadowing the joy of his birth. He is the baby that was born in order to die.

Human beings were created so that they should love and choose God simply because He is God but to do so requires that the person be righteous, that is, oriented towards that which is the Highest Good and it was this way that mankind was created. When humanity chose otherwise, it became impossible for a person to perfectly live as God originally intended and in order to be restored to perfection, God had to find a way for humanity to make a complete recompense for its sin. However, since God is infinitely good, a sin against God must be infinitely bad and, to be repaid, recompense must exceed all that is not God. Humanity by itself is not capable of paying back that which it does not have, namely perfection and the original purpose and destiny for which God created humanity. "There is nothing superior to all that exists which is not God - except God." Hence, only God could repay such a debt, yet since the debt was not owed by God but by humanity, it was necessary for recompense for humanity's sin to be paid by a God-man. An infinite offense by humanity could only be repaid by one who was human and infinite and that someone is Jesus. (St. Anselm, Cur Deus Homo)

While Jesus lived a quiet life in Nazareth for about 30 years, He began ministering and preaching the Good News only three years before His death. For most preachers and religious leaders, that is hardly enough time to get a religion or movement off the ground. Yet after only three years He was considered such a threat that He was put to death. It is only logical to conclude that even in His own time, he was a very disconcerting and subversive figure that caused a great deal of concern. He wasn't put to death for being another nice moral teacher.

"On Palm Sunday, Jesus entered the holy city hailed as the Son of David. He came as a Davidic warrior. ... As Holy Week unfolded, it's as though all the powers that had opposed Him from the time of His birth came out in full force to meet Him." (Fr. Robert Barron, "Catholicism") The crucifixion is the battlefield where He fought the enemies of Israel, the enemies of humanity - sin and death. The Passion of Jesus includes all forms of human sin and cruelty: hatred, denial, betrayal, violence, stupidity, injustice, etc. It is as though all human darkness and sin comes out to meet Him but He doesn't meet it with violence but accepts it and offers forgiveness. Jesus fights and overcomes sin by meeting it with innocence and nonviolence. The Cross is His throne from where He offers Himself as the perfect sacrifice to redeem humanity.

Had Jesus' death been the end of the story, three years ministry wouldn't have been enough to get a cult running much less birth Christianity. In fact the surest sign that Jesus wasn't the Messiah would have been his defeat by His enemies. But the first Christians travelled throughout the ancient world and proclaimed that Jesus was the Messiah even to the point of giving their lives in their profession and that only makes sense because of the Resurrection.

The Risen Jesus appeared to the disciples and showed them his wounds and his risen body and then said, "Shalom," "Peace," consoling them that even mankind's greatest enemies - sin and death - cannot separate us from God. God has conquered them. As Fr. Barron says, "we killed God and God returned in forgiving love."

In the world you will have trouble, but take courage, I have conquered the world. John 16:33 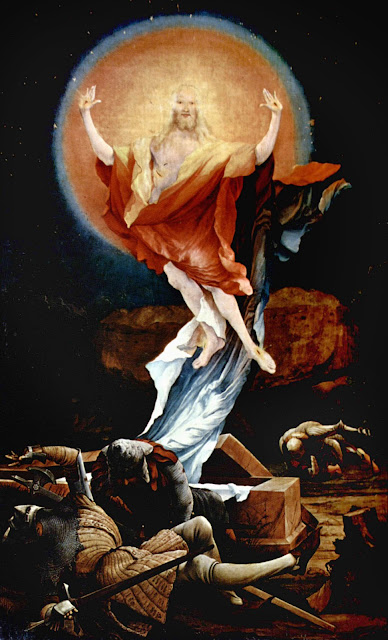 Posted by Katherine at 4:38 PM

Email ThisBlogThis!Share to TwitterShare to FacebookShare to Pinterest
Labels: Church, Year of Faith