Last fall we realized that, with the arrival of baby #5, we would need to figure out a new way of getting around. Our Honda Odyssey seated 8 but it seated 8 people, not 8 car seats. Most car seats are wider than the standard car seat, so... 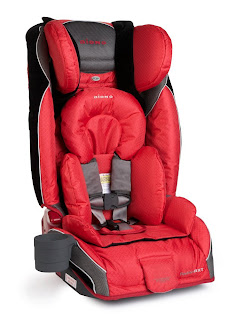 Our choices were either to buy all new car seats and replace the ones we had with this one - the Diono Radian, which is safe but narrower than most car seats, or buy a bigger car. We debated about it. On the one hand, we like the Odyssey and a new car was expensive but, on the other hand, with the Odyssey, even with the smaller car seats we would have no room whatsoever for even 1 extra passenger such that we could never carpool any other kids and even if only my dad wanted to join us for a trip, he'd have to take his own car.

My parents were willing to help us buy a new car so, trying to look at the big picture and the long-term, we bought a new car.

Looking for a car that seats more than 8, we were looking for a 12 passenger, which basically left us with 5 options: The Mercedes Sprinter, the Ford S-Series, the GMC Savana, the Chevy Express and the Nissan NV3500. The Mercedes Sprinter is the most expensive, has a deisel engine and, since it is Mercedes, would require special mechanics should anything need repair, so we ruled that one out off the bat. We looked at the Ford and Nissan and my friend had recently bought a GMC conversion van we looked at. We never did see a Chevy but my understanding is that it is similar to the Ford and GMC.

For the most part, the vehicles are pretty comparable. Our biggest complaints with the GMC and the Ford were that the seats were simply bench seats... you either had a whole row or none at all. There were no configuration options with regards to the seating. The seat belts are also all attached to the roof or sides of the car such that movement in the car requires ducking under or climbing over car seat straps - as the one who would be heading back to nurse an infant or deal with vomit, having to dance around seat belt straps didn't thrill me.

The Nissan offered us a lot of seat configuration options as well as seat belts built into the seats. It came in a V6 with carpeting and was a nice, if a bit boxy, looking vehicle. So that is what we got. 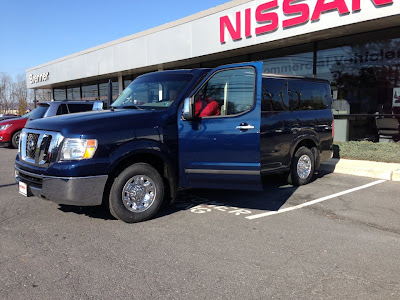 (The day we bought it. Subsequent photos are more recent with the added decoration of filth from the snow :) ) 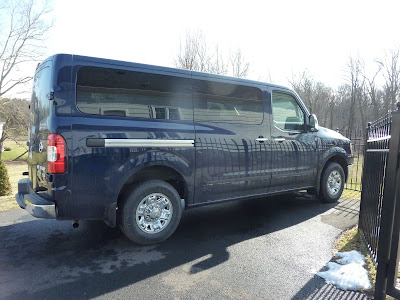 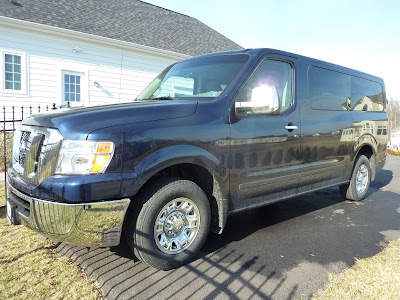 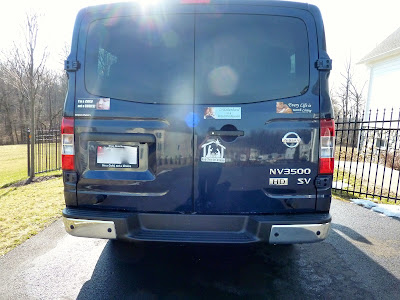 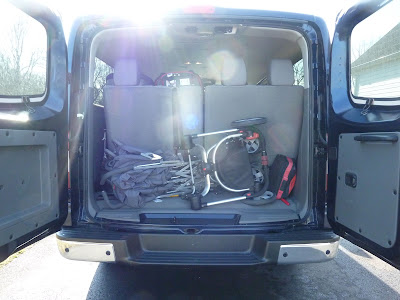 There isn't a lot of cargo space but this is also where the seat configuration options come in handy... being able to remove only one or two seats rather than a whole row opens up cargo space without losing a bunch of seats. 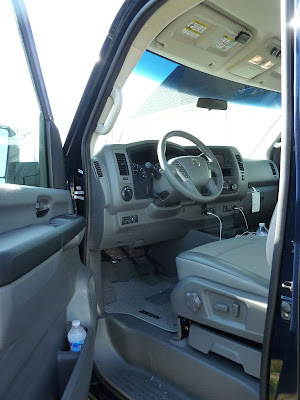 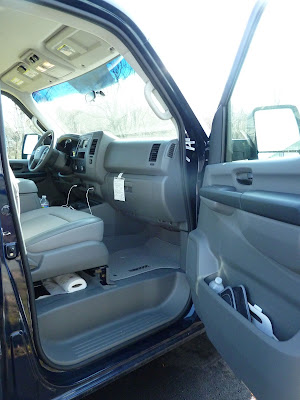 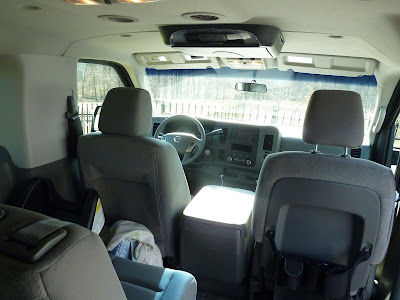 We installed a DVD player for the longer trips. 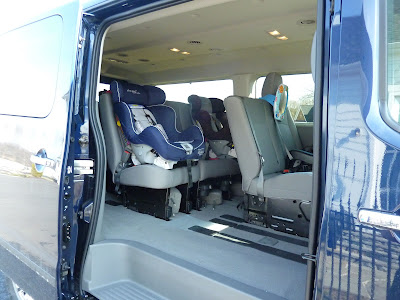 We removed one seat to make getting in and out easier as well as maneuvering when I have to climb back from the front, but it is nice to know we could always add it back in if we needed it! 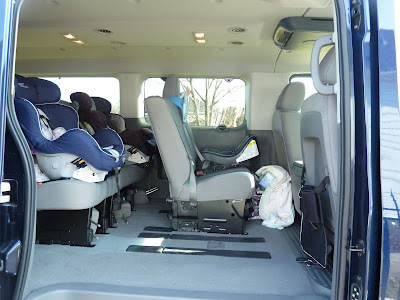 Brigid's car seat sits directly behind the driver. It keeps her closer if I have to climb back and nurse her, wipe up spit up, etc. 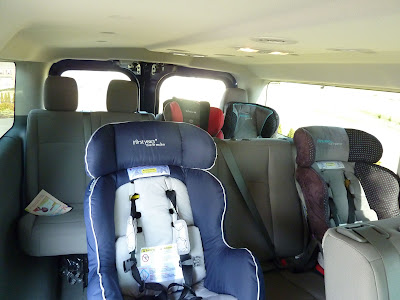 Behind Brigid rides Elizabeth against the window and Teresa in the same row. Behind Elizabeth sits Cecilia with Felicity beside her. It just seems to make sense to have the oldest ones in the back and work our way forward by age and hence neediness. We did get one Radian seat, which Felicity uses. We rather like them and will probably buy them in the future as the need arises.

Even with 5 car seats and a seat removed, we can still take 4 extra passengers, which is always nice to have and we have made use of already.

The A/C is pumped in from above while the heat comes in through the floor. Each row has double overhead lights. I admit there is not as much storage as I'd like but I also have to admit we've never been a family to store much in the car. So we store some things under the seats and I've taken to using a bag behind the driver seat under Brigid's car seat for baby toys, travel magna doodles, etc.

You may notice that the driver cannot see well out the rear windows. The same is true of the Ford and GMC vehicles. But the side mirrors are specially designed to give the driver vision on the sides and rear from multiple angles.

We've had a number of people ask us about the car. Nissan only began making the cargo version of this van a few years ago and the passenger version last July. Only about 600 were made of the 2012 model but I believe they began pushing out 2013 models in December.

So far I love it. It didn't take long to get used to driving it and the rear camera helps us back up safely and accurately. I would like to get some side-step bars due to the height of the vehicle, but it is so new none are available yet so we keep a step stool in the car should anyone need it.

Email ThisBlogThis!Share to TwitterShare to FacebookShare to Pinterest
Labels: Family