Year of Faith: Mary, The Mother of God

Previous posts in my series of posts for the Year of Faith:
God the Creator
Jesus, The Incarnation
Jesus, The Savior

Mary is an interesting figure. She is not mentioned in the creed except to say that Jesus was born of the Virgin Mary. Yet Catholicism has much more to say about her. I discussed her briefly in my post on the Incarnation:


God never forces Himself on anyone and it is no different here. But just as when a husband and wife come together in self-gift and joyful surrender to each other to create a child, God invites Mary and she joyfully surrenders herself to Him.

The Old Testament is full of examples of individuals and whole nations who turn away from God, who say, "No," to God, always with unfortunate consequences. But Mary says, "Yes," unconditionally. She represents the best of Israel. She is Eve, created without sin to be the mother of all the living. She is a daughter of Abraham, the first one to answer in faith. She is like Sarah and Hannah giving birth against all odds. She is the ark of the covenant becoming the bearer of the Word. She is like the prophets who longed for the coming of the Messiah. She is the Psalmist reflecting on things in her heart. The angel calls her "full of grace." She is the best of humanity always being open to God's will and embracing it with everything in her being. She is all the best humanity has to offer and she is this because God made her so. God blessed her the Immaculate Conception, conceived without original sin, the pure and sinless one, so that she could receive God Himself as He deserved to be received. Studies like this one, revealing how women and their children share cells long after the babies have been born, give another reason why Mary had to be free from sin: she would bear the body of the living God not just until birth, but all her life.

Mary is called the Theotokos, or the Mother of God because Jesus is God. While some take issue with this title, she is not the Mother of God because she was His mother from eternity but because she is the Mother of Jesus who is God. Mary is the way through which God comes to us, she is the vessel through which God the Son becomes human and is born among us. God chose to come to us through Mary. Mary likewise seeks to bring others to Jesus. She still acts directing us always towards her Son. The last recorded words of hers in the Bible are at the wedding at Cana when she tells the servants to "do whatever He tells you." That is her message to everyone: Do whatever He tells you. She is always directing, guiding, illuminating the way to God, the way to please God. 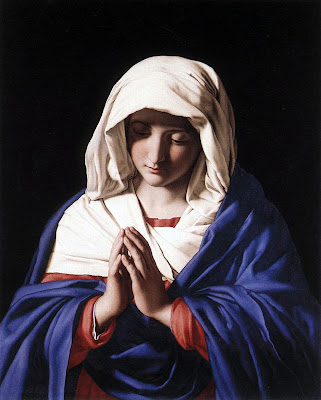 Although Mary's last recorded words were at the wedding at Cana, Mary's role does not end there. From the cross, Jesus gives John to Mary as her son and gives Mary to John as his Mother. In this, Jesus gives us a mother in Mary as well. Christ, the New Adam, is the first-born of the dead, the first raised to new life after death. So, as it is through Mary that we receive Jesus, Mary, His Mother, likewise becomes the Mother of all the living, the Mother of all those raised to new life through her son, Jesus Christ. From the cross, Jesus commissions Mary and Mary begins her new mission not only as the Mother of Jesus but also as the Mother of the Church.

Because Mary was sinless, she would not approach death with fear but rather a complete openess to the will of God. We speak about Mary not dying but rather falling asleep, her dormition. It makes a lot of sense. Mary's soul had no sin and so was uncorrupted. Her body held the living God incarnate. It would hardly be appropriate for the perfect vessel that bore the Son of God to corrupt and decay. It also makes sense that, not having suffered from original sin, Mary would not need to suffer separation from her body. Her body was pure. Her soul was pure. So it was Mary who would be given the gift of the resurrection of the body and be assumed body and soul into heaven. And in her assumption we glimpse  the resurrection we hope to share.

Mary is like the moon, never giving her own light but reflecting the source of light itself, her Son. As Fr. Barron says, "In the first chapter of the Gospel of Luke, we find Mary's great hymn of praise to Yahweh. It commences with the simple declaration, "My soul magnifies the LORD." Mary announces here that her whole being is ordered to the glorification of God. Her ego wants nothing for itself. It wants only to be an occasion for giving honor to God. But since, as we've seen, God needs nothing, whatever glory Mary gives to Him returns to her benefit so that she is magnified in the very act of magnifying Him. In giving herself away fully to God, Mary becomes a superabundant source of life. Indeed, she becomes pregnant with God. This odd and wonderful rhythm of magnifying and being magnified is the key to understanding everything about Mary from her divine Motherhood to her Assumption and Immaculate Conception and to her mission in the life of the Church."

May Mary guide each of us closer to her Divine Son.

Posted by Katherine at 5:20 PM