I wanted to post about the pope on Monday, but I couldn't.

When I first found out, I felt like I'd been punched in the gut. I was in absolute shock. I was disoriented. I felt like a child whose parent tells them they can't take care of them anymore and that they are putting them up for adoption. I couldn't even remember what my plans were for that morning or for that day. And when I'd start to think too much about it, I'd start to cry.

I needed a little time to adjust to the news.

Tuesday was better. By Wednesday I was okay. 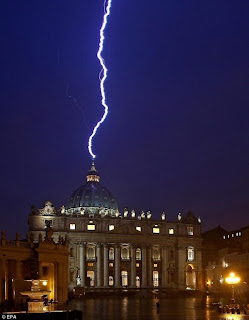 I think the shock was twofold. First, there is the obvious fact that it hadn't been done in 600 years so it didn't even dawn on me as a possibility. Second, the Church is more than "the rock," it is my rock. It is my surety and stronghold through the chaos and mess of life and the pope abdicating is hardly just another day as a Catholic. It felt like lightning had struck my church. Which, it did. But, while the rock is still the same sturdy foundation, a change in earthly leadership cannot help but be felt.

I spent Monday, and even part of Tuesday, bouncing back and forth between shock over the suddenness, sadness over the loss of my Holy Father and anger that, unlike JPII, he was choosing to leave. 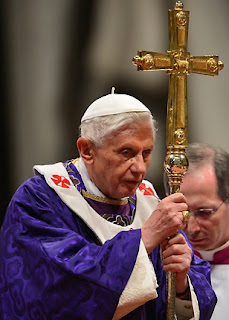 But the more I thought about it and talked about it, the more sense it made. Pope Benedict is older now than John Paul II was as pope when he died. Benedict will be 86 in April. The oldest pope ever was Leo XIII, who was 93 and, as the story goes, was partially blind and had to hold onto the altar just to say Mass. It doesn't take a genius to recognize that the demands on the pope today far exceed those placed on the pope over 100 years ago and there aren't many octogenarians who could keep up with the pace demanded for the pontiff in our global and fast-paced day and age. Pope Benedict is so endearing that it is easy to forget his age and the natural limitations nature can place on a person at that season of his life.

So while, no, I am not happy my dear Benedict XVI will be disappearing from view, it is with daughterly affection that I understand his reasons and inspired admiration that I respect his choice. It isn't everyone who could walk away from such a position of influence to embrace a life of quiet prayer. Heaven knows not enough people in authority do who should.

So it is with warm regards I wish Pope Benedict XVI only the best and will continue to pray for him as well as our future Holy Father who, indeed, has big shoes to fill.
Posted by Katherine at 1:54 PM