Do your kids eat erasers? Why do mine insist on eating their erasers and even pulling off the metal caps off the top of their pencils that hold the erasers?!? I'm looking forward to the end of school even if only to spare the erasers!

Last week, Disney's Wreck-It Ralph came out on DVD/BluRay. To keep the kids busy while I unpacked last weekend and recovered from our trip, we bought it. They ask to watch it every single day. They LOVE this movie unlike anything I've seen from them before when it comes to a movie. It really does have something for everyone from the rough wrecker Ralph to the cute nice guy Felix, the touch sharp-shooting Calhoun and the adorable, sweet Vanelope. 80s kids like myself enjoy finding video game characters throughout the film we knew from our childhood and even the music is catching. The ONLY things we aren't fond of for our kids is a video game zombie whose "heart" gets pulled out (how does a zombie have a pumping heart anyway?) and one very addictive song with the words "shut up" in it. Otherwise, loving it!

After we got back, I gave Brigid a much needed bath and weighed her. She weighed 10 pounds, 1 ounce. 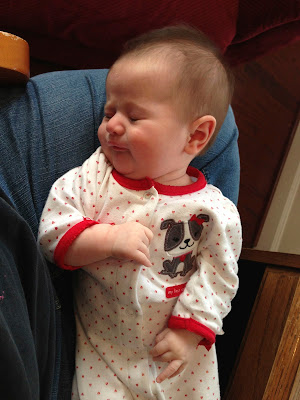 It has been a rough school week, and when I say rough, I mean slow and dragging. Part of that is retuning from vacation, part is Spring fever and part is all the excitement of the conclave. We revolved our school days on Tuesday and Wednesday around the conclave.

Wednesday, for reasons I won't bore you with, I had to run to the mall, by myself, with all five kids. So, when no smoke appeared by 12:45, we bolted to the mall and made it back five minutes before 2pm. It takes me at least 5 minutes just to get all the kids into the house. So, just after 2pm, I had Cecilia chanting at me, "Mom, come, quick! There's going to be smoke any second! It's coming! I know it!!!"

Cecilia even grabbed my little Vatican flag and made a sign to wave and run around the house with. 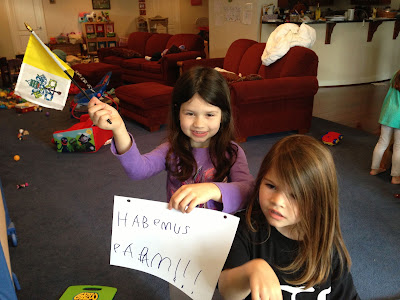 My first reaction to the new pope was a simple, "Who?" I had never heard of him before, never seen him before and knew nothing about him. It actually sent me into a bit of an emotional roller coaster... "My knew Holy Father is who? I'm supposed to have warm regard for who? I need to get to know him first. Wait, who?" I had never really run into this before and I just hadn't seen it coming. I was born after JPII was elected and I was already fairly familiar with Ratzinger before he was elected. And, truth be told, I've never been overly fond of St. Francis either. I don't have anything against him per se, but he hasn't been one of my favorites either, so that didn't help me either.

That said, from the slew of pictures, articles and videos of seen of him in the last 2 days, he is growing on me. He certainly seems like a gentle, warm soul who is intelligent and caring and I'm eager to see how his papacy progresses. I'm still getting used to the name Pope Francis, but if you are a fan of St. Francis and think you could help me like him better, I'm all ears! Why do you like St. Francis?

Posted by Katherine at 1:54 PM