For our Spring Break, we thought we'd take a vacation with the whole family, and when I say whole family, that includes my parents, my brothers and my brother's fiancee. But 6 plane tickets and being molested by the TSA were neither affordable nor preferable, so we drove. But we've done the multi-day drive with 4 kids before and knew with 5 it would only be as long, as complicated and as expensive if not more so (especially if any hotel required us to get 2 rooms due to the number of people - the size of the people never matters). So we decided we would just drive all night while the kids slept in the car.

Overall, it was a good plan and it went well. We stopped every few hours for bathroom breaks for us, gas refills or beverage refills. The only downside really was that every time I tried to take over the driving, about an hour into my shift, Brigid would wake up and want to nurse. It made it hard for me to drive a lot, but at least it gave James a bit of a break.

By breakfast time we had reached Jacksonville and stopped for breakfast at Chick FilA at Daytona, Florida. After we ate, we let the kids run around the playground for 45 minutes. It gave us a break, them a nice stretch and some fun playtime. 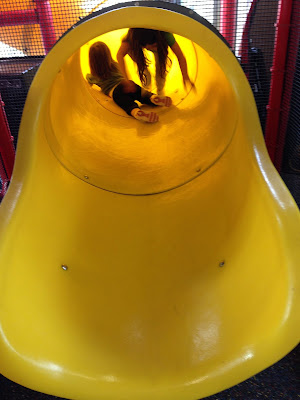 What really surprised me was Teresa. She didn't hesitate to scale the entire playset and go down the big swirling slide multiple times. She loved it. Of course, she also did the whole routine in reverse as well. This is Cecilia trying to come down the slide correctly while Teresa climbs up underneath her.

We finished driving to Orlando, checked into the hotel and drove over to Downtown Disney for some shopping. With a new Lego fan in the family, we had to visit the Lego store and we browsed Goofy's Candy Co. and the huge toy store. After picking up some goodies and a couple of toys, we went to Olive Garden for a late lunch.

Then we returned to the hotel to get our room and set up for the week. By then, my parents had arrived and one of my brothers with his fiancee and pooch had arrived as well. They did some grocery shopping and went out to dinner and we all got to bed early (okay, James and I nearly passed out as we were quite exhausted by then) for the next day.

On the second day, we went to Sea World. I hadn't been to Sea World in ages but I thought the girls would enjoy it. First we went to the Clyde & Seamore show, staring two seals with cameos by an otter and a walrus. 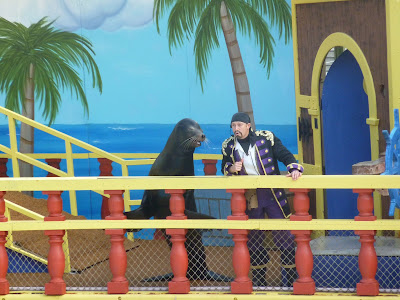 The plot behind the show was downright dumb - something about a pirate losing a map and running into a marooned pirate who finds the map. The animals were beautiful and fun to watch though and the "actors" who are really trainers, were quite funny and took it well in stride when the animals would improvise. 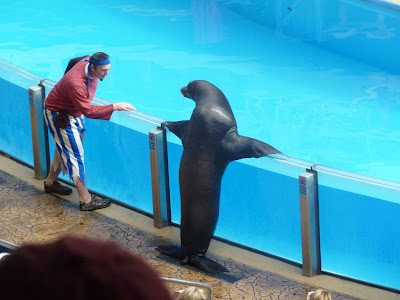 The marooned pirate playing "Made You Look" with Clyde. 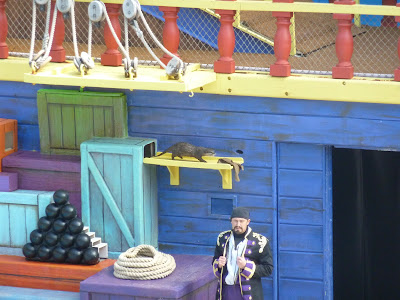 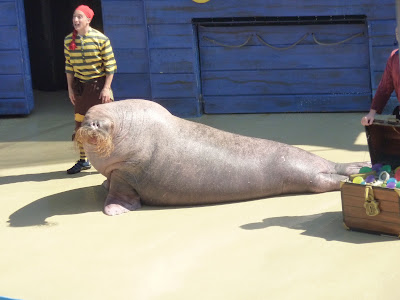 A toothless walrus. Why he is toothless, I have no idea, but he is a big fella! (who really needs to shave!) 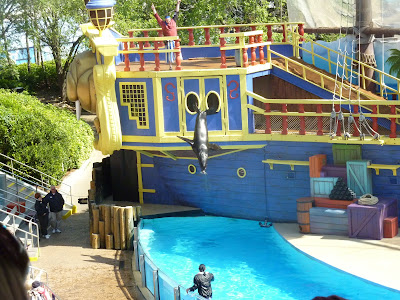 Clyde taking the plunge. He didn't seem to mind the frigid water like his trainer did. Did I mention the high that day was something like 47? Brrrr! 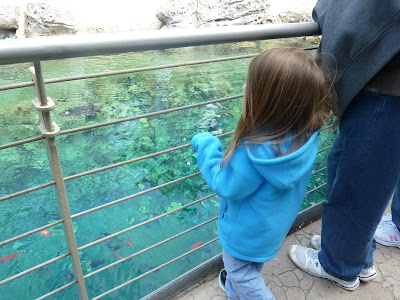 Elizabeth LOVES sea turtles, so it was no surprise she couldn't get enough of the turtle tank. It fits that her favorite color is green too. 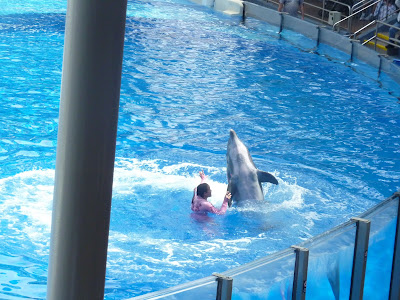 Next we hit the dolphin show. 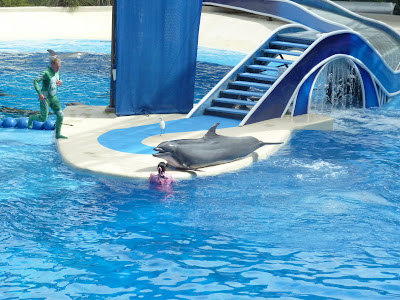 Now, the dolphins were beautiful and they are such amazing animals. Cecilia really wants to swim with one one day. But I thought the show was a bit lacking. The show has three parts and yet the middle part has NO dolphins! Needless to say, among our group, the "doesn't this show have dolphins?" joke was made more than once. 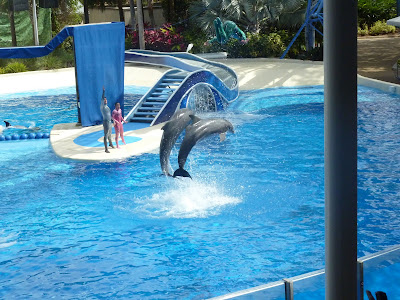 I didn't bother taking pictures of the middle part of the show which was primarily acrobats, divers and dancers. They were good, don't get me wrong, but we came to see the dolphins and getting all artsy without dolphins in a dolphin show is just a bit annoying. 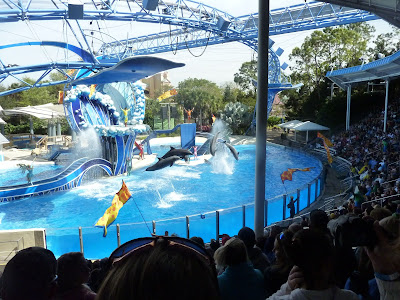 Next speed walked (you just can't run with 5 kids short of an emergency) across the park to make the next showing of the Orcas. It was insanely windy that day too. Poor Brigid had a hard time staying asleep with cold wind repeatedly blowing the blanket off her carrier. 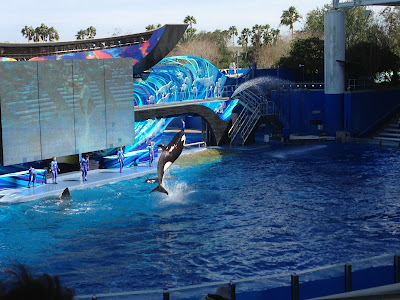 Of course the orcas were absolutely gorgeous. I loved orcas growing up. I drew them, painted them and decorated my room with them. So it was sweet now taking my kids to see the animals I was always so fond of growing up. 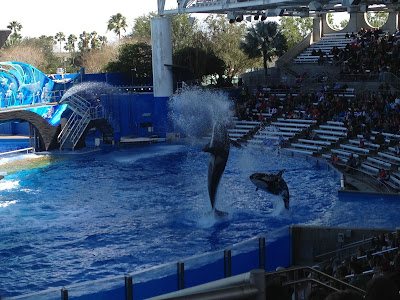 The Shamu show was well done. All of it was about the beautiful whales and I never got tired of watching them. 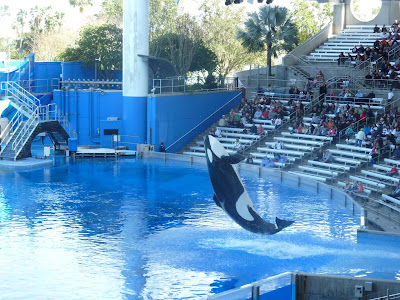 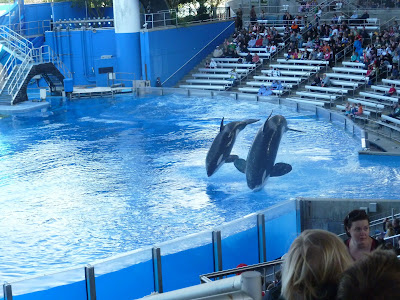 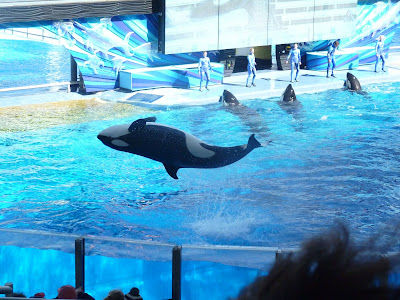 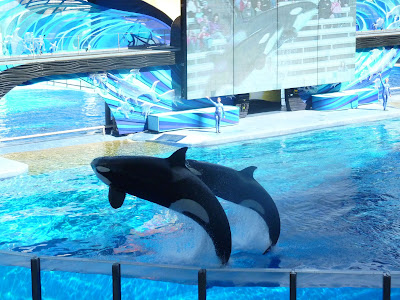 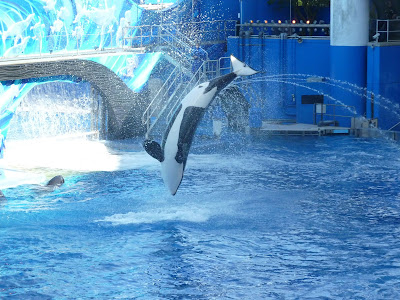 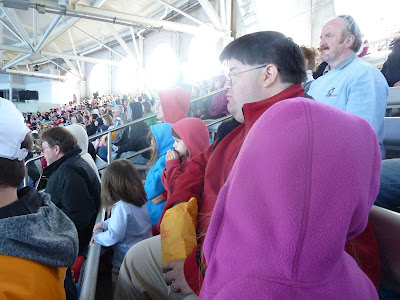 You can see how we were bundled that day. Oh, and I will add, there seems to be a conspiracy against baby carriers in Orlando. At all these shows, including Fantasmic at Disney World, the benches are made too narrow to hold the carrier and the space between the benches too narrow to set it down. I either had to hold it or sit it almost vertically between benches. It was interesting, but we managed, Brigid and I. 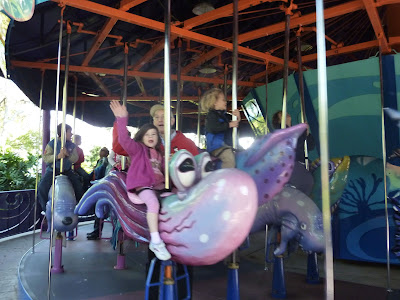 Afterwards, we went to the kid play area and rode the carousel. It was a neat carousel of all sea creatures. Felicity rode a squid/cuttlefish thing. 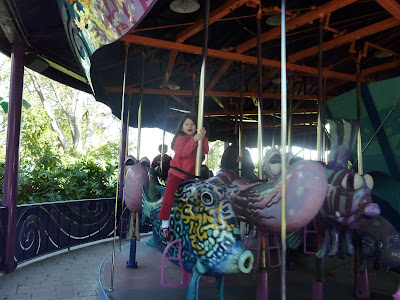 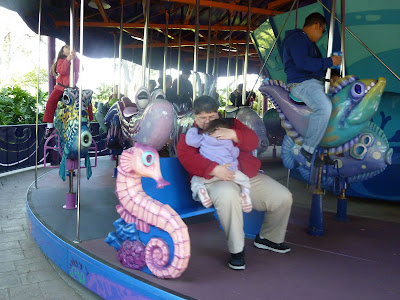 James shielded Teresa from the wind on a bench of sea horses. And while they were on the carousel, a song came on they all knew - In the Belly of the Whale, from Veggie Tale's Jonah. 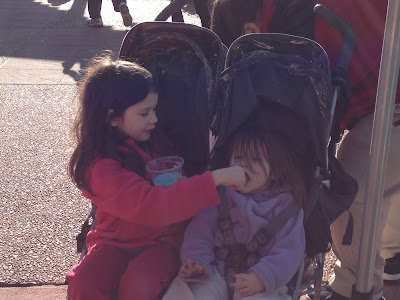 Afterwards, we grabbed blue raspberry slushy drinks, a personal favorite of mine. Cecilia sweetly shared with Teresa, who didn't get her own cup for the 3000 obvious reasons.

We picked up Chilis To-Go on the way back to the hotel followed by watching the fireworks over the Magic Kingdom before bath time and bedtime. Teresa was too little to remember the fireworks from our last trip to Disney World. She was especially enraptured with them pointing out each and every one to me.

Posted by Katherine at 8:19 PM