Sunday morning, Teresa discovered an awesome hiding place in our hotel suite... the cabinet pantry in the kitchen: 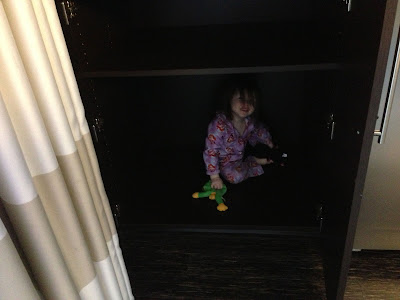 I hated to wake Brigid that morning... she made it hard... but we needed to get to church. 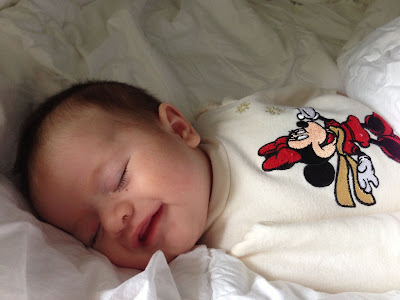 For Mass, we went to the nearby Mary, Queen of the Universe Shrine. It was built especially for tourists and travelers to the Orlando area. It is far from the prettiest church I've ever seen. It doesn't actually have a crucifix in it. It has a deceased corpus and a cross, but not together. Don't ask me why. And, since it relies on the funds of tourists, Mass always begins with a game-showesque meet and greet with the priest wandering with a microphone warming the "crowd" and explaining the unique mission of the church. Mass there is always rather penitential for us, but we've tried other nearby parishes and haven't found much better and the Mass times at the shrine are preferable for us.
Afterwards we went to Downtown Disney for lunch at Wolfgang Puck's and then to Disney Hollywood Studios, where we would return as well on the following day. 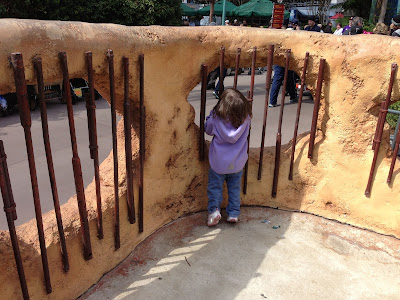 Cecilia and Felicity went on their first ride, Star Tours - a kindof virtual reality Star Wars ride. They loved it. I hung out with Brigid and Teresa while they went on the ride with daddy. Teresa kept wandering into the crowds, so I finally cornered her in this little niche... I believe it is part of a market on Tatooine. She got to people watch and I knew she couldn't get through the bars. :) 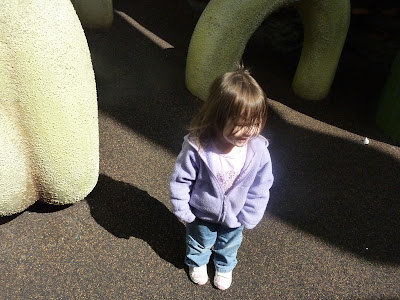 Next we went to their favorite playground, the Honey I Shrunk the Kids playground. It is a huge playground designed so that you feel smaller than an ant. Teresa was too little to play here the last time we came but oh did she love it this time! 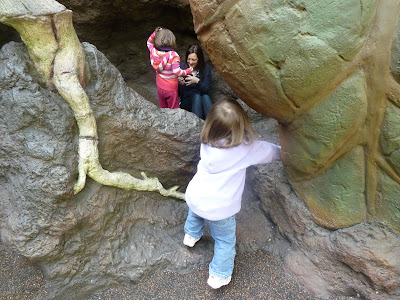 She played Peek-a-Boo with complete strangers around the giant leaves and roots. 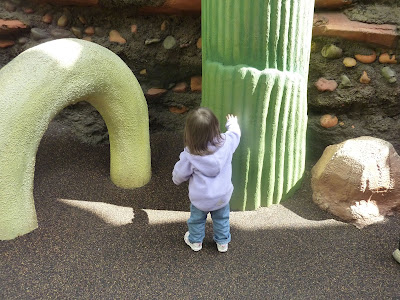 She played through the stems and jumped on the shoots. 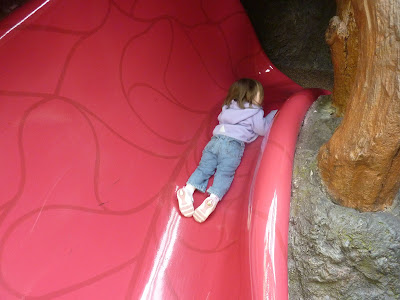 But her favorite was a flower petal slide. She absolutely LOVED it. 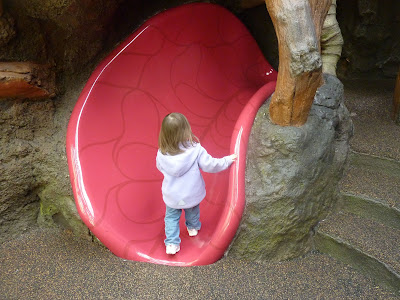 She usually struggles with steps by herself, but she was so determined to get up those steps for this slide, it wasn't long before she mastered them and I could just stand back and let her go. 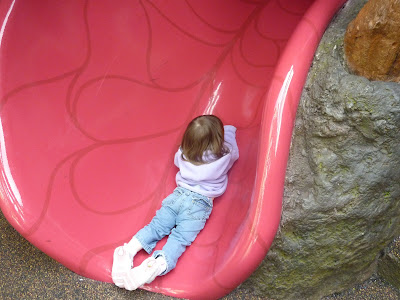 She went down forwards and backwards, on her tummy and on her tush. 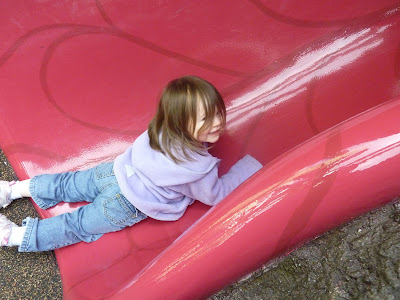 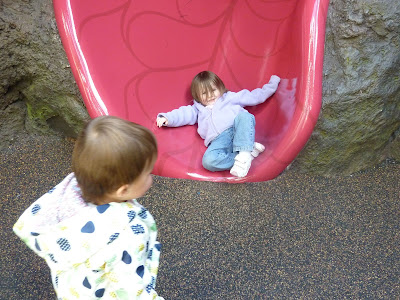 She couldn't get enough... 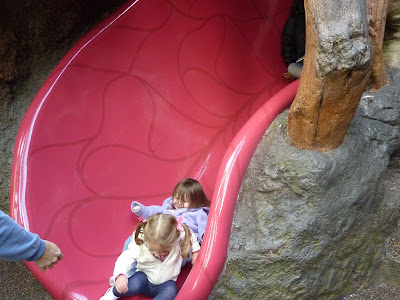 And she didn't care if anyone hadn't quite gotten off the slide yet... 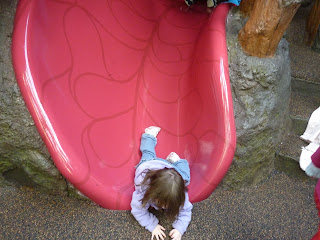 Or if they were taking too long to get on... she'd dive on in. Apparently having 3 older sisters translates into never letting any opportunity go to waste! LOL 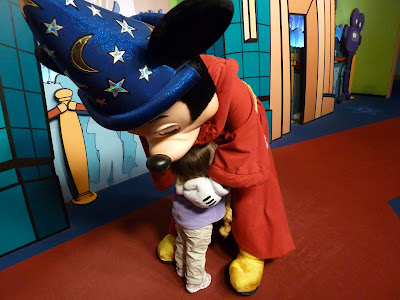 The next day, we took Teresa to meet Mickey Mouse. She ran up and hugged him. It was absolutely adorable. She loved it and just lit up. 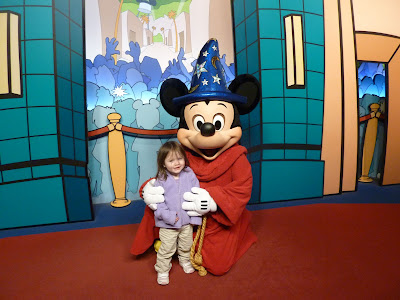 She was all smiles from ear to ear and wouldn't take her eyes off him even after I had to carry her away from him. 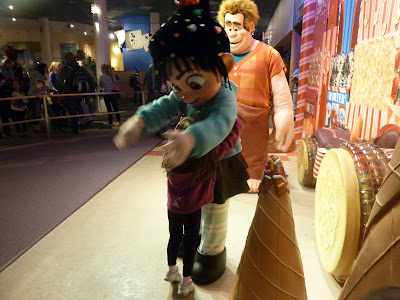 Then we took the girls to meet Vanelope and Ralph from Disney's Wreck-It Ralph, the girls' newest favorite movie. They absolutely love it from the film to the soundtrack to the toys to the special features... they adore all things Wreck-It Ralph. Felicity especially loves Vanelope and ran to give her a hug as soon as it was our turn. 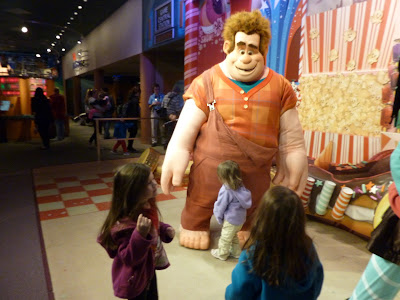 Teresa tried to give Ralph a hug. You can see how small she is compared to Ralph. I was worried for a minute he might knock her over but she was good. 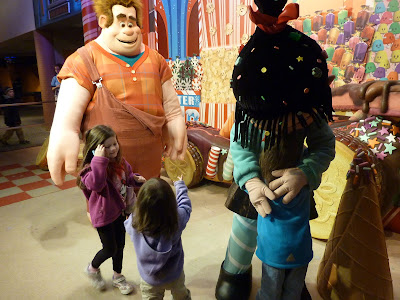 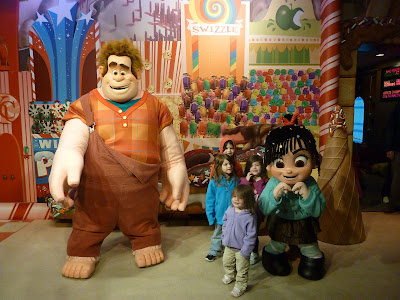 The girls with Ralph and Vanelope 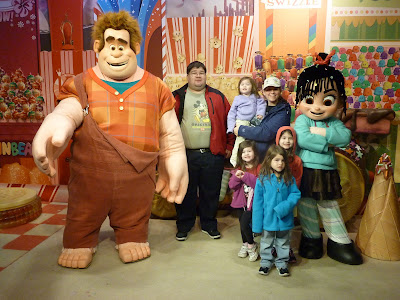 The whole family with Ralph and Vanelope. By the time we left them, Teresa was really upset with me. She kicked and screamed trying to go back and if I set her down she made a run for it back to her "friends." So cute. 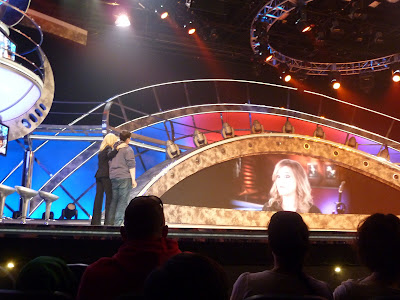 My brother was on their American Idol attraction and got to perform.

(I apologize for my poor cinematography... I had a nursing baby in my lap at the time.) I thought he did quite well. I thought the second performer was a good contender as well but it was the third performer, who I thought the weakest, who progressed to the next round. My brother has been on it enough times to have noticed a pattern that, if the votes aren't completely rigged, the show is certainly set up to have a particular contestant win, but it is fun regardless. 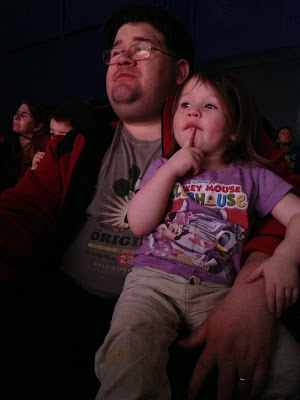 Afterwards, we went to Disney Junior Live!, a puppet show of some of the main characters from Disney Junior's preschool shows. They had updated it since we were last there. 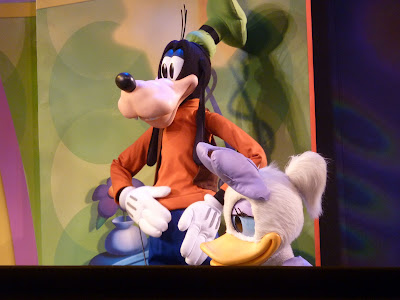 Now, in addition to Mickey Mouse and his usual friends from the Clubhouse, 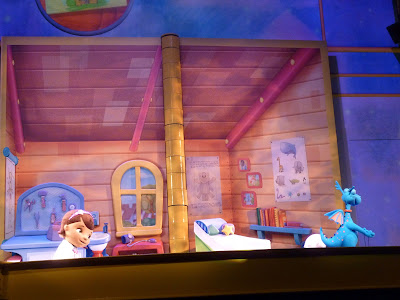 they have Doc McStuffins with her friends Chilly, Stuffy, and 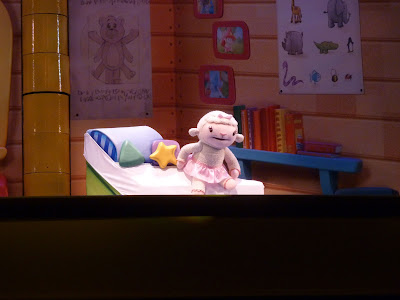 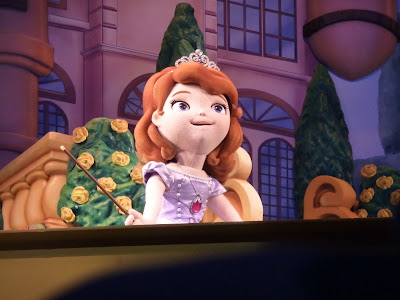 Princess Sofia the First, and Jake and the Neverland Pirates. 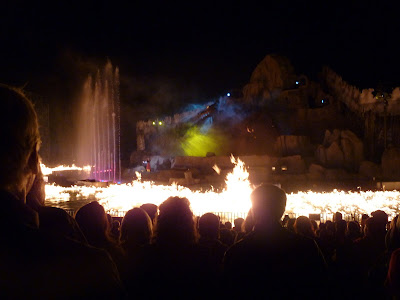 We had lunch at Mama Melrose's and got tickets for Fantasmic. Tickets are only available with meal packages but save us needing to be there so early and sit so long with such young children. And Fantasmic is such an awesome, unique show, we never want to miss it.
In Fantasmic, they use water, lights and music to project all the awesome characters Disney has brought to life onto a spray of water. My favorite part is the music, but the way it is done is just so neat. Then the villains of Disney animation try to take over Mickey's imagination and turn it into a nightmare, culminating in Mickey battling a huge dragon surrounded by a lake of fire. 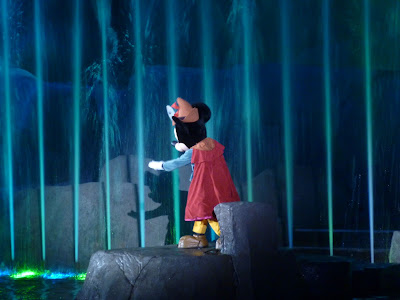 But, true to his sorcerer self, Mickey uses water shoots to put out the flames 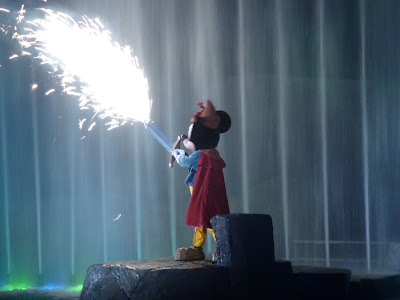 and a magic sword to slay the dragon. 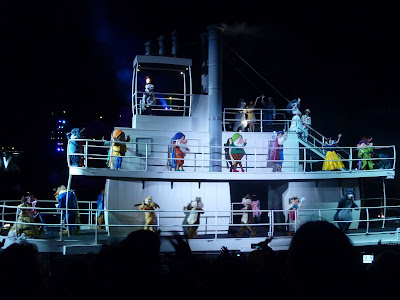 Followed is a finale of Disney characters, beautiful music and fireworks.