On Tuesday we ventured to the Magic Kingdom. Anyone who keeps up with anything about Disney World knows that they have been redoing a nice chunk of Fantasyland at the Magic Kingdom. They still aren't finished, but we did go on the new Little Mermaid ride. 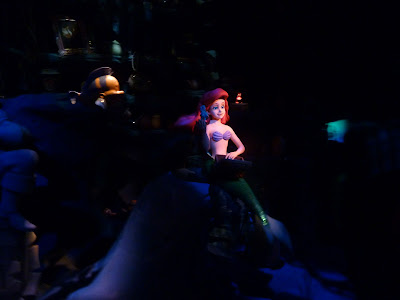 I'm not a big fan of The Little Mermaid Disney movie for numerous reasons, but the ride was a simple and cute rendition of it. 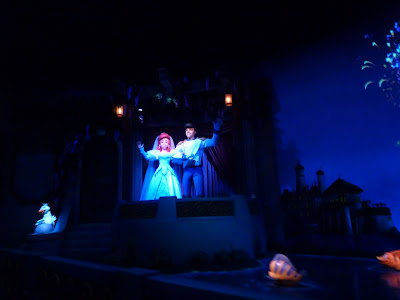 Afterwards we went on the Carousel, which the kids had been begging for since we got there. It still amazes me how, with so many rides, the kids still adore the carousel. There is almost something magical about a beautiful carousel that is simply obvious and intuitive to kids. 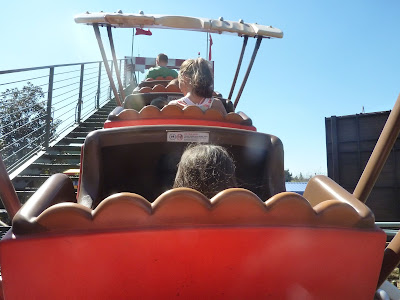 Eager to ride their first roller coaster, I took Cecilia and Felicity on The Barnstormer, a kids roller coaster. Unfortunately it is only 2 per seat but Cecilia was brave and agreed to ride by herself. It was a huge mistake for which I only blame myself. Cecilia is more sensitive and Felicity is my daredevil but I rode with Felicity since she was younger and smaller. I should have rode sideways to ride with them both or asked to ride with each one at a time. Felicity enjoyed it and Cecilia hated it and swears she'll never ride another roller coaster again. Hopefully in a year or so she will be willing to try again, this time with an adult by her side and I won't have scarred her enjoyment of roller coasters for life. 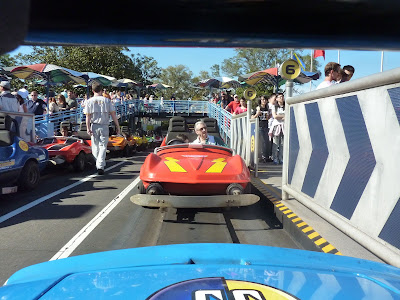 We then went on the Tomorrowland Speedway. My dad rode with Cecilia. 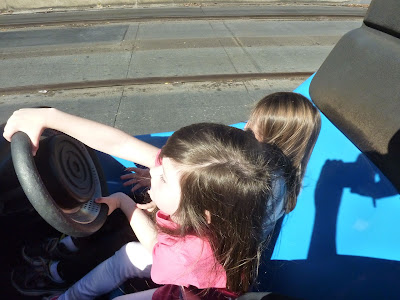 I rode with Felicity and Elizabeth, both of whom took turns steering but neither of whom enjoyed the jerkiness of their own driving and soon asked me to drive. :) 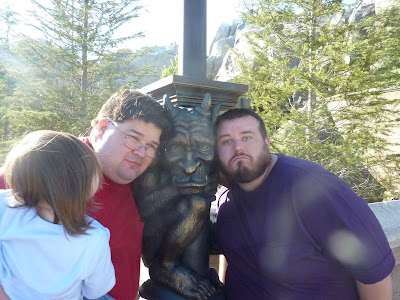 In October I made reservations for all of us at the new Be Our Guest restaurant, which, judging by the standby line, is quite the spot to get into. This is my brother and James posing with a gargoyle on the bridge to the restaurant. 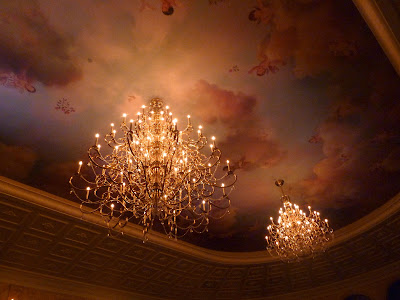 We were seated in the Grand Ballroom and oh my was it gorgeous. I wanted to move in there. The food was very good too. I had a pork chop with a macaroni au gratin and green beans followed by a triple chocolate cupcake. Mmmmmm. 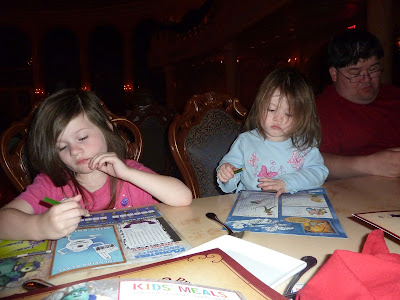 Felicity and Teresa and James at Be Our Guest. 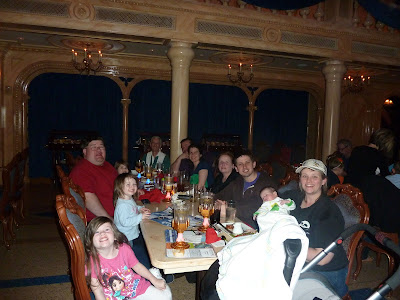 All of us except Cecilia who insisted on ducking under the table for the photo. 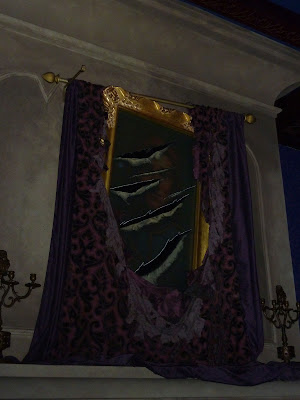 There are two other rooms to eat in. One was closed for dinner but seemed to be some sort of portrait gallery with a turning Beauty and the Beast statue in the center. The other was the West Wing complete with glass-covered rose and the ripped portrait of the prince. 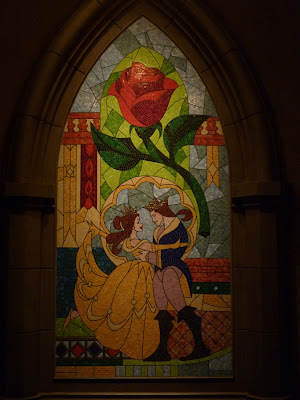 After dinner there was a separate room where you could meet the Beast and take pictures. None of my kids were interested except Teresa who, by then, was running a bit rampant. But I loved this mosaic on the way out! 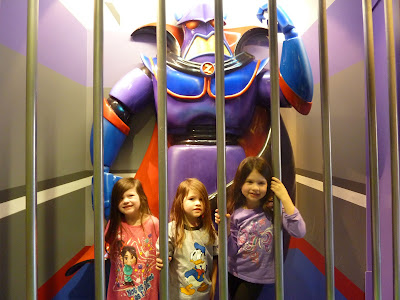 We went on the Buzz Lightyear Ranger Spin and got a shot of the three oldest in jail with Emporer Zurg. All of us except James and Brigid went on the ride. I got a score of 80,000 or so. My brother's fiancee was in the 300,000s. But Felicity bested us all with a score of 401,000. Yep, whipped by a 5 year old. Ha! 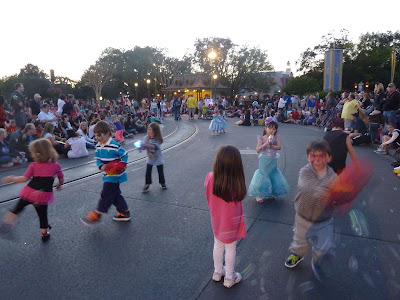 After dinner, we went in front of the castle to watch the Electric Light Parade. I promised each of the girls I would buy them a light up toy before the parade. Felicity and Elizabeth each bought bubbles guns and had a blast playing with other kids in the street until it got dark. 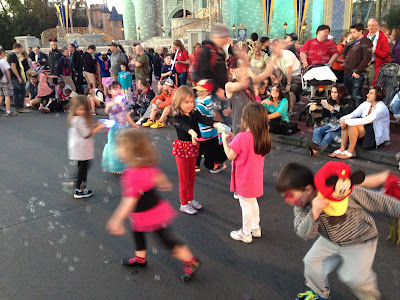 A couple of kids came up to them asking to "share" but as these are not cheap toys with limited bubbles and the point was for the girls to play with them before the parade, I intervened. Yes, I'm all for sharing, but this was just not the time for it, especially when a child we don't know could simply take off with it. 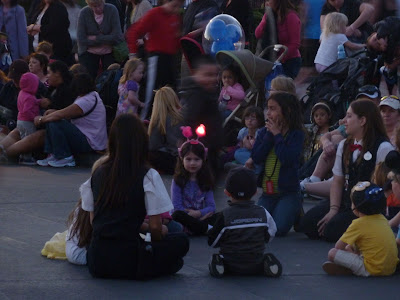 Cecilia got pink light up Mickey Mouse antennas and played a round of Duck Duck Goose with other kids in the street while waiting for the parade. 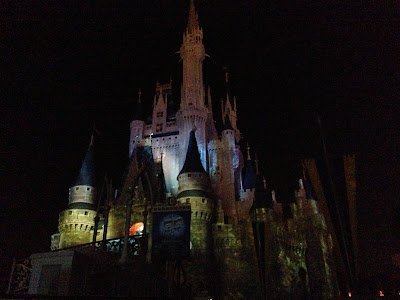 I didn't take pictures of the parade. Been there, done that and they don't usually turn out well anyway. But after the parade there is a new show in which they project images onto the castle. It was really neat. We watched Wreck-It Ralph "wreck" the castle as bricks fell. (I wish I'd gotten a shot of that one!) This is of Merida from Disney Pixar's Brave galloping in the front of the castle with forest around the base. 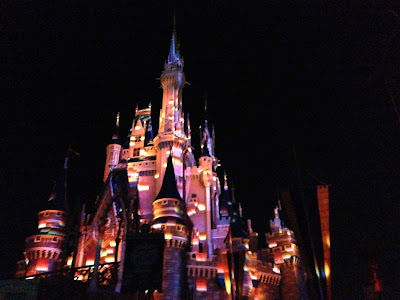 From Tangled, they projected lanterns rising around the castle. Beautiful. 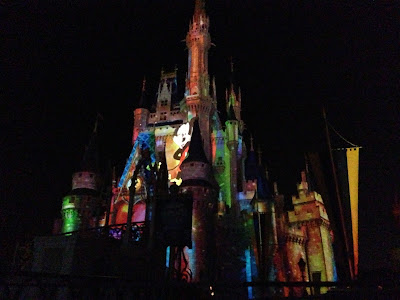 "I only hope that we never lose sight of one thing- that it was all started with a mouse..." ~Walt Disney 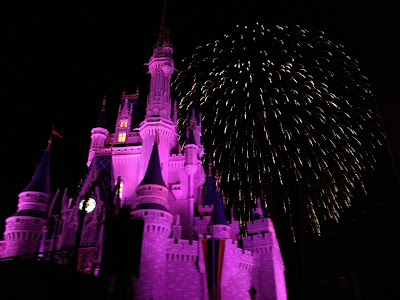 And, of course, you can't have the finale without fireworks. 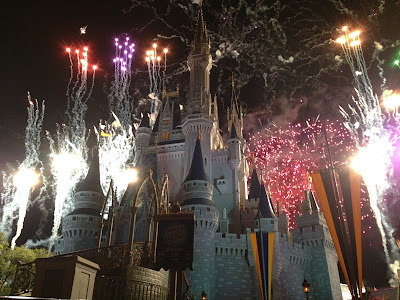 Lots of fireworks. And somehow, during the fireworks, Elizabeth fell asleep. :)

On Wednesday we went to Animal Kingdom. Felicity rode Dinosaur for the first time with my dad, my brothers and my brother's fiancee. Then my dad took Cecilia, Felicity and Elizabeth into a huge playground called The Boneyard. James, Teresa, Brigid and I hung out outside and Teresa played with her new toy. She loves it! 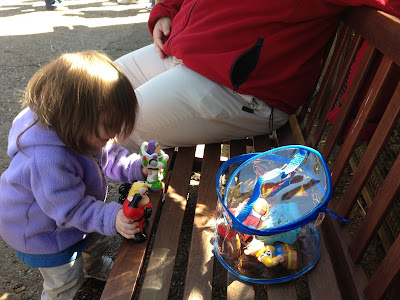 Can you tell which two are her favorites? :) 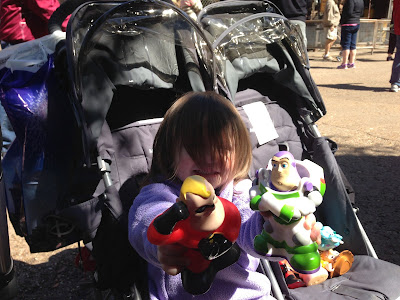 We had lunch at a really nice Asian restaurant called Yak & Yeti. It was really good. We had Honey Chicken and Beef with Broccoli and chicken fried rice and their jasmine rice is delicious. The fried green beans and egg rolls were a nice treat too!

But I will take this opportunity to comment on the parks' kids menus. At most of the restaurants, they have replaced the traditional kids menus with healthy ones including a fish dish, a wholegrain pasta dish, a grilled chicken dish and usually one other, like meatloaf. Now, I'm all for offering kids healthy options. However! When I am on vacation and my kids are on vacation, it is okay if they have mac and cheese or chicken nuggets and fries and not even offering them made it very difficult with picky eaters, especially Felicity. I had whole meals where the kid just ate bread because they didn't offer any of the more common kid meals that she might have otherwise eaten. Ironically, the Yak & Yeti was the only restaurant we ate at that had mac and cheese and chicken nuggets with fries and yet there Felicity was happy to have the beef with broccoli and chicken fried rice. I'm all for having healthy options for kids, but this is not Michael Bloomberg's park! (end rant :) ) 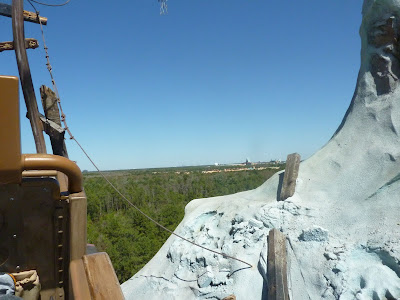 After lunch, my brothers, my brother's fiancee and I went on my favorite ride at Disney World, Expedition Everest. It is a fun roller coaster themed around the attack of a Yeti hiding in Mount Everest. This is the view from its highest point, where you can see EPCOT in the distance. It was the most expensive roller coaster in the world to build and is the tallest "mountain" in Florida at 200 feet (not saying much I know). After reaching the top, where it seems the Yeti has destroyed the track, you continue backwards for part of the ride and just sheer fun, followed by more forwards thrills in an 80 foot drop and it reaches speeds of 50 mph. It is just plain awesome. 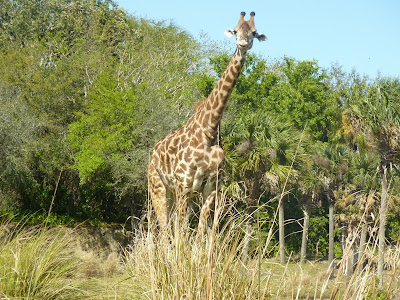 We then went on Kilimanjaro's Safari to see the animals. James stayed behind with Brigid and Teresa as both had fallen asleep. It features a fun safari ride through pens of animals from around Africa. I love the giraffes. 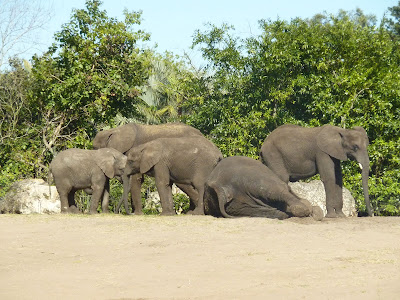 And this lovely fella showed us just what he thought of being put on display. Lovely, huh? LOL 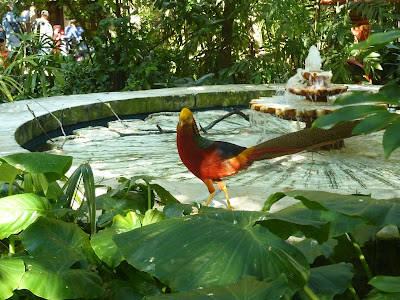 We went through a couple of animal treks to see tigers, bats and various birds. Colorful fellow isn't he? 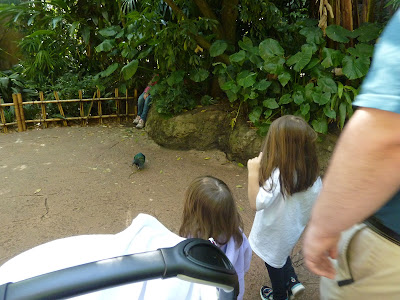 Of course, Teresa thought it would be great fun to chase the birds. No worries, all survived. :)

Posted by Katherine at 9:07 AM