On Thursday we went to EPCOT. We went on Spaceship Earth first. The homeschooling mommy in me kept trying to point out the Egyptians and the papayrus and the monks copying manuscripts and Michelangelo painting the sistine chapel and the kid in Cecilia just wanted me to hush up and let her enjoy the ride. :)

Afterwards we went on the Finding Nemo ride and had lunch at Coral Reef. We then took Cecilia and Felicity on Soarin', which they'd never been on before but enjoyed and then the Living with the Land boat ride. We then hit the Universe of Energy and Journey into Imagination. I SO miss the original Imagination ride. It was SO much better. But afterwards the kids got to play in the ImagineWorks. 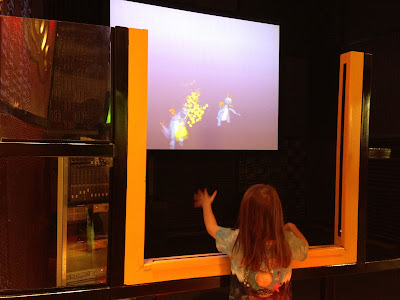 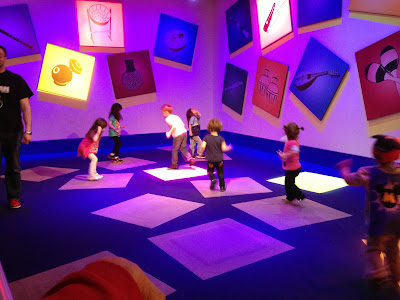 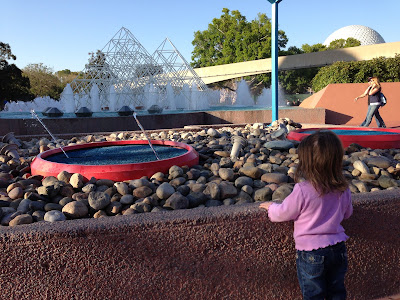 After that, we went outside to the jumping fountains. Teresa had been too young to remember them from last time, but she loved them this time! 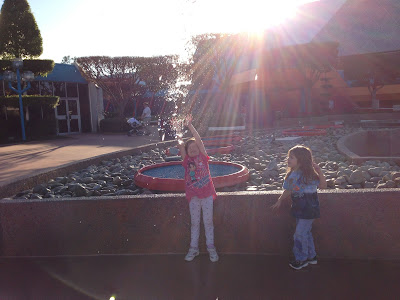 While it was warm enough that they didn't need jackets yet, it wasn't that warm and as the sun was setting I told them they shouldn't get wet. 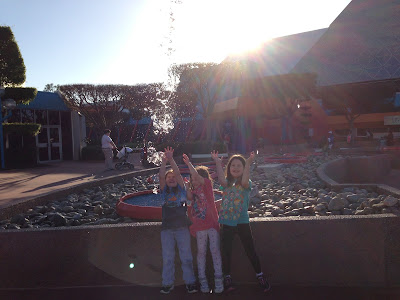 Of course, do they ever listen to me? Ha!

On Friday we finished packing up our stuff into the car, but before checking out, we went downstairs for a special breakfast. 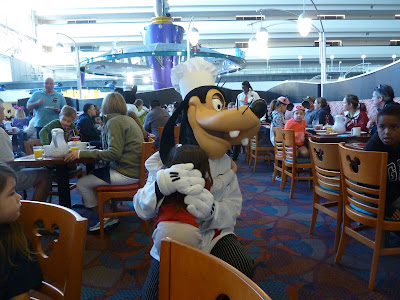 Felicity was always the first to want to greet any character and this was no exception. She ran up to hug each character. 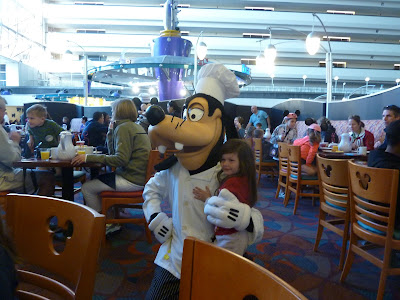 For my shiest, quietest child, she is never reserved when it comes to the characters, princesses or dippity dawgs. 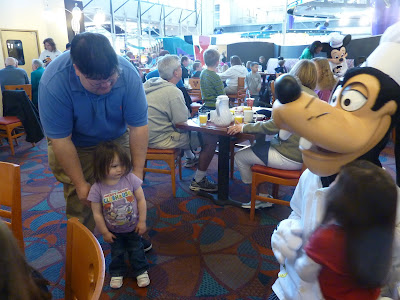 Teresa was a bit intimidated by Goofy's size but she eventually shook his hand. 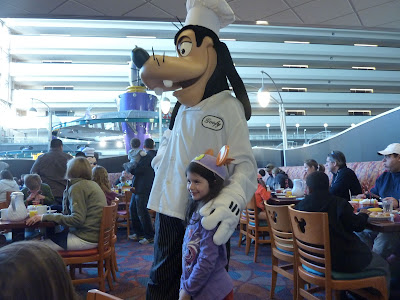 Cecilia was the one that surprised me. When she was little and a character came to our table she was cry and hide under the table. It was so nice to see she had finally realized there was no need to be afraid of them and she stood by them and smiled for each character. 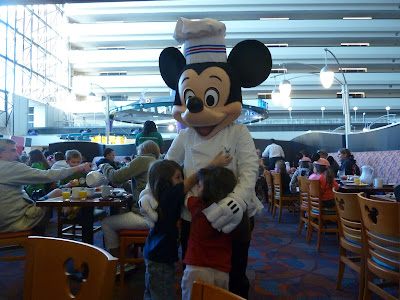 By the time Mickey came around, Elizabeth had warmed to the idea too and she ran up to hug Mickey with Felicity. 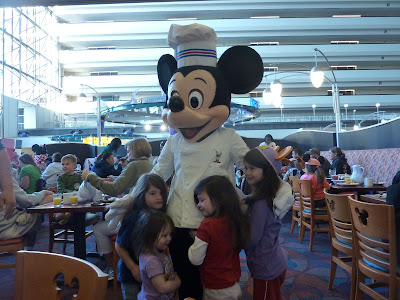 I think once we had all four girls going up to each character, the characters were a bit surprised by how many kids they had hugging them. They were always warm and friendly though. 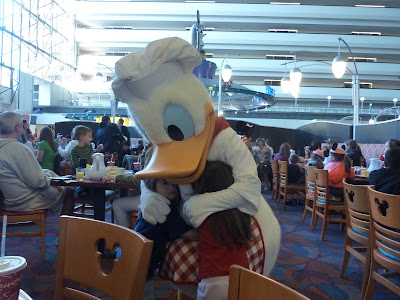 And my favorite, Donald Duck, with Elizabeth and Felicity. 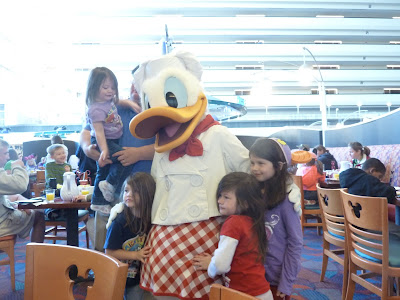 The girls with my favorite short-tempered trouble-maker. 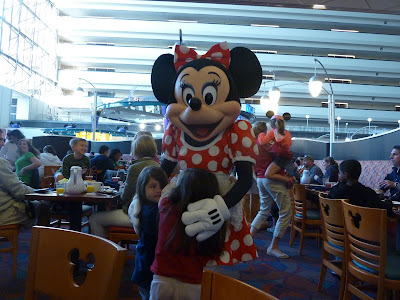 Hugs for Minnie. Felicity and Elizabeth always seemed to get to the characters first, but maybe that was because they were seated closest. 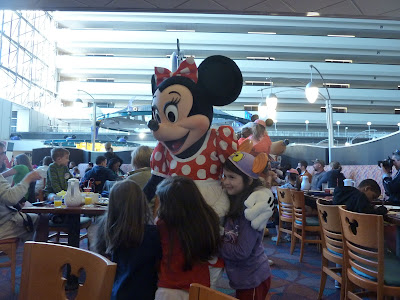 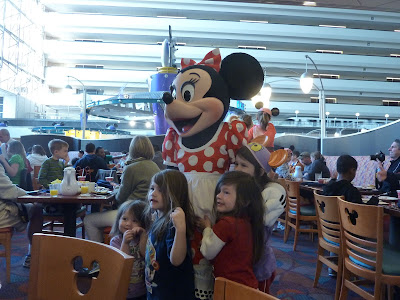 The girls with Minnie.... and a very happy Teresa. 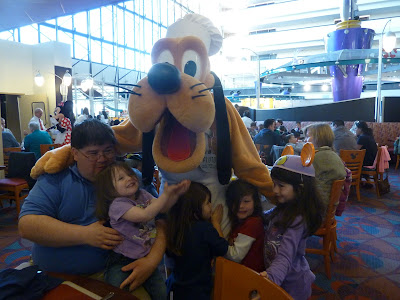 And, of course, the gang is not complete without Pluto. I love the look on Teresa's face. 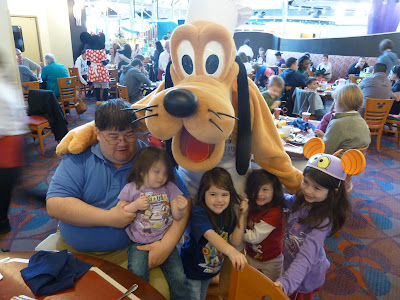 Well, the girls have been asking for a dog. :)

After we checked out of the hotel, we hopped the monorail over to the Magic Kingdom for a few more hours at the park before heading home. We rode the new Dumbo ride and went to Winnie the Pooh's play corner for some play time. 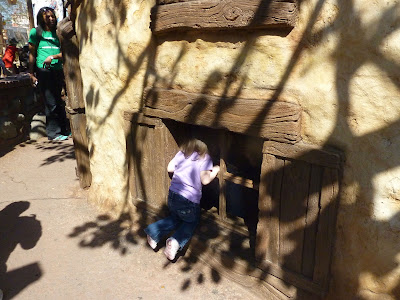 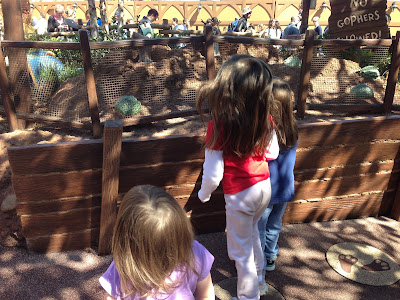 Cecilia, Elizabeth and Teresa hopping on pads to make gophers come out of Rabbit's garden. 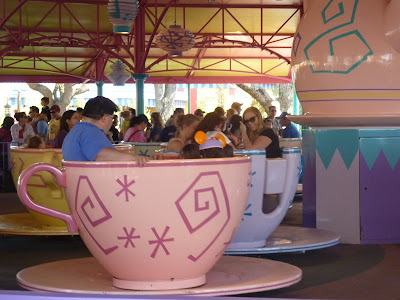 We went for a spin on the teacups. Then we met my dad and went on Pirates of the Carribean. I'm proud to say, due to the 30 or so minute wait, I managed to nurse Brigid in line, standing up and walking, and no one even knew. Sometimes I even manage to amaze myself.

Afterwards, Cecilia and Felicity went with my parents and brother on the Haunted Mansion, my dad's favorite ride. Then we browsed some shops on the way to the exit and headed for the car. Unfortunately, we hit rush hour out of Orlando, but after that it was smooth sailing and this time I was able to help drive more. We stopped for breakfast just north of Richmond at Starbucks and gave the girls croissants, bagel and donuts. By the time we got home, James and I were thoroughly exhausted. It took me two days to catch up on laundry and unpack, but we're slowly getting back into the swing of things, perhaps a bit more slowly than usual, but I think the time change had something to do with that too. :)

Posted by Katherine at 1:08 PM