The Baptism of Catherine Rose

A dear friend of mine, whom I met when we were in Kindergarten together, honored James and I by asking us to be their daughter's godparents.

So we packed up the kids and drove up to NY. Happily, they were able to meet us for dinner the night before. We met up at her husband's office at a marina and had New York Pizza. Oh I do miss New York Pizza... the best kind on this continent if you ask me. Our kids got to visit and play and his office had ample space for the kids to burn off some of the energy they saved up from the drive. 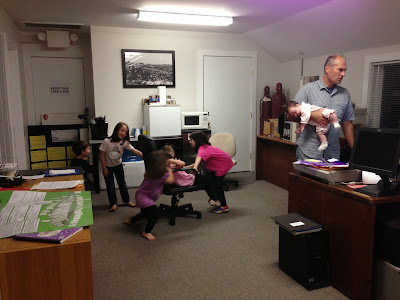 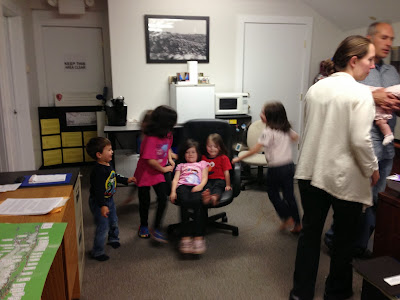 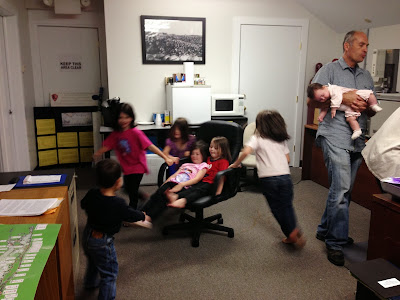 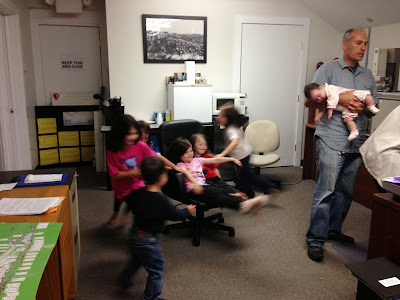 On the property were also his labs where he is raising horseshoe crabs. The kids got to see them from eggs and babies to juveniles up to adults and learned how to tell the difference between males and females (their front claws are shaped differently). He even bequeathed us two exoskeletons from when they shed and grow. 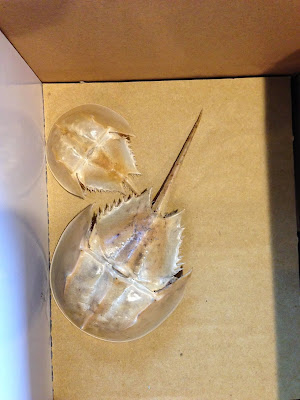 The following day was a very blessed day. We gathered at Cure de Ars parish. We got there a teensy bit early but the girls had fun looking at all the statues. 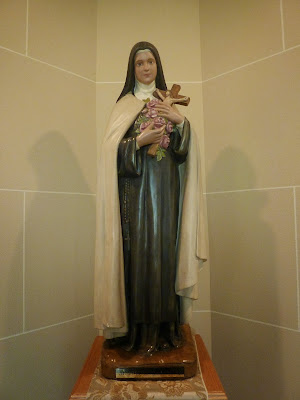 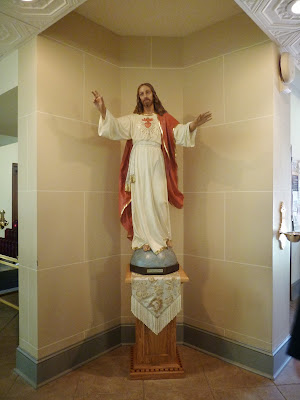 Teresa burned off some energy twirling in the narthex. 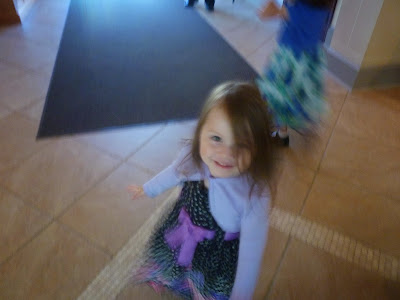 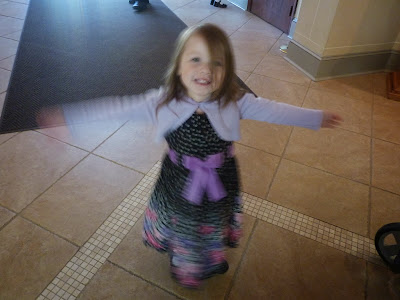 While my mom enjoyed some quiet time with Jesus. 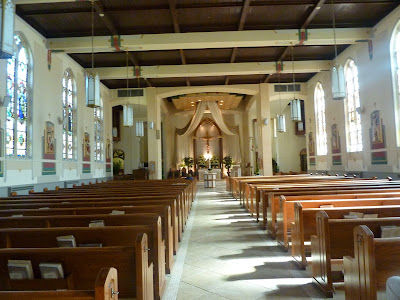 Once everyone else arrived, we tried to get all the kids settled. We, of course, have our five, and she and her husband now have four. The way the kids basically settled in it became the baby pew on the front left with her and her baby and me with Brigid and the kid pew on the front right with the fathers and the rest of the kids. 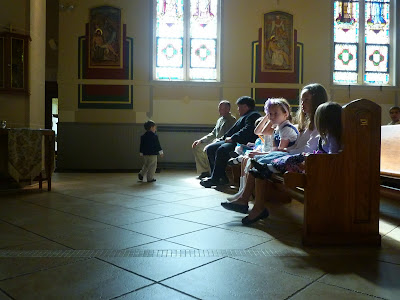 Until Teresa realized had a couple of teething toys for Brigid. One is of a plastic Piglet. She became determined to have it to play with. I wasn't going to give in until she began chanting, "Piggy! Piggy! Piggy!" Then I caved. 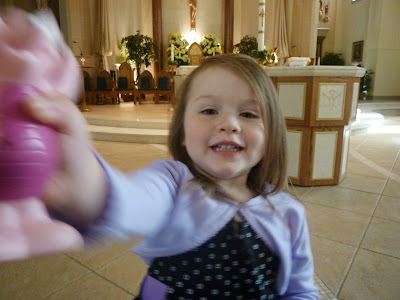 She was quite pleased to get it.

The church is quite beautiful and the baptismal font was all set up front and center for us. 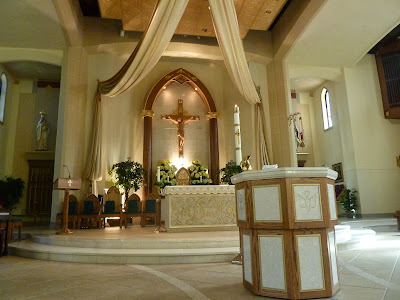 Her little boy had fun running in circles around it while we waited for the priest to arrive. Like us the previous evening, he got caught in New York City traffic. NYC traffic is just insane. It still blew my mind people choose to have to deal with it daily. If everyone in it offered their commute up, purgatory would be empty in no time. 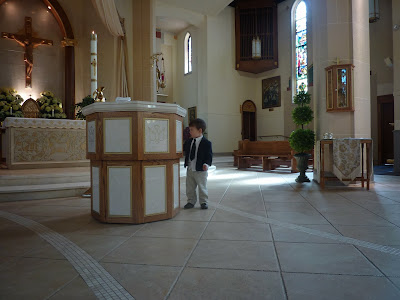 The baptism itself was the older traditional rite, so we began in the back of the church. I don't know if it is because of the older rite or just the priest's preference, but he wanted the godmother to hold the baby through the ceremony. Lucky, lucky me!!! 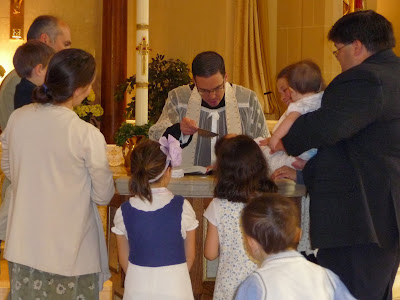 The wee darling was baptized Catherine Rose. My name is Katherine Rose, but she is not named after me. That didn't stop me from complimenting them on their name choice though. :) 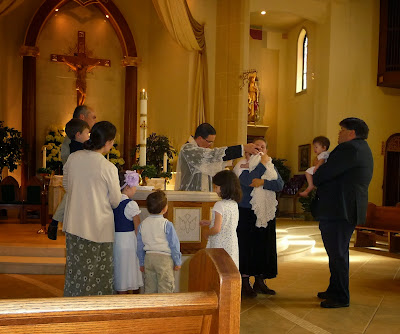 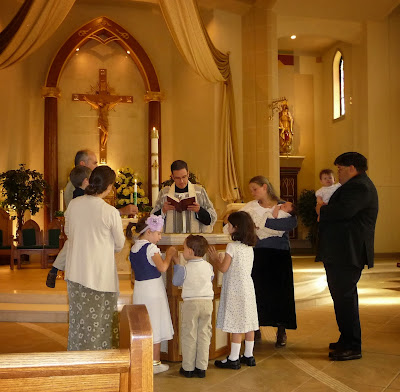 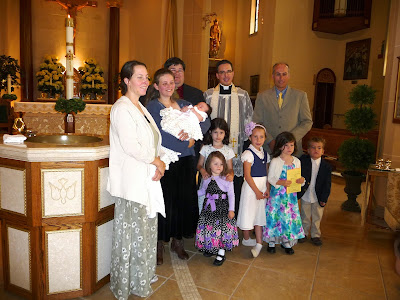 Little Catherine and I got along very well. I even got her asleep during the reception. If only my own kids would follow suit. :) 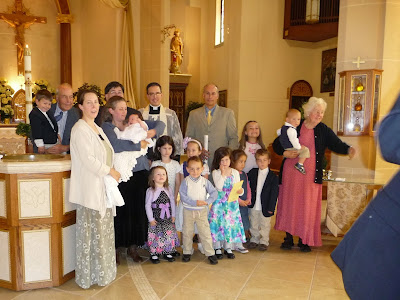 It was a beautifully blessed day and we all had a wonderful time. It was so nice to be able to visit with our friends too. I so wished we lived closer together. Five hours is a long drive with such little kids, we don't get to see each other nearly as often as we'd like. 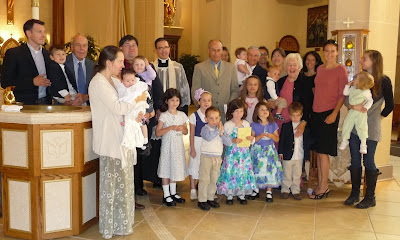