This week has been particularly busy because on Sunday night, we got a puppy. This is Rosie Sprinkle. 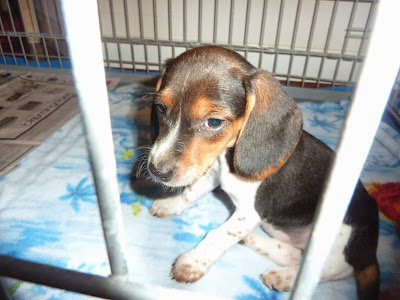 Her name was a compromise between two of the girls. Elizabeth said she liked the name Rosie and Felicity loved the name Sprinkle. Cecilia said she liked Rosie and, frankly, if I'm going to be yelling a dog's name, I preferred Rosie myself. But Felicity was adamant and would not budge on the name Sprinkle. Hence her first and middle names. I also love the subtle reference to Mary that Rosie conjures to mind. (Mystical Rose, the roses of Our Lady of Guadalupe, the golden roses on the feet of Our Lady of Lourdes, the Rosary, etc.) 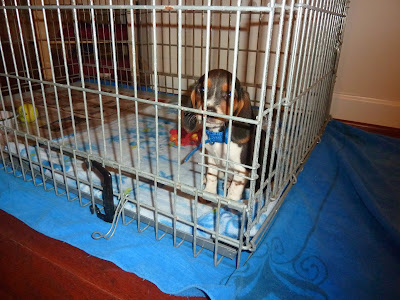 Rosie is a Beagle (I have to thank Charlie Brown for making me second guess how to spell that word every. single. time.) and was born on September 1st. For the mathematically impaired or the sleep-deprived (that would be me), she is 9 weeks old. 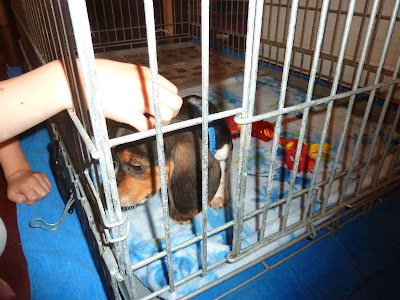 I've had a puppy before and raised a dog and my husband grew up with dogs, so neither of us are new to dogs but I had a Golden Retriever and he grew up with chihuahuas, so we kind of come at the subject of dogs from different ends. We knew we didn't want a really big dog even if just because of the expense but I also knew I didn't want a dog so small that it wouldn't be able to hold its own very well with five young children. I've always thought Shiba Inus were really cute, but there was the concern of fur and how much fur we wanted to have to deal with. Beagles are short-haired which means minimal brushing, shedding and hiding of leaves, dirt, bugs, etc. I used to bathe and groom my golden, so I know what it entails but with five young children and homeschooling, it made sense to keep things simpler. 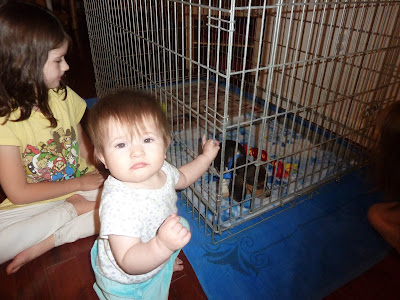 Upon finding out we got a puppy, a few people asked if I was crazy. Apart from being a bit rude, I was grateful I've only gotten such comments for getting a puppy and not for having 5 kids. I do find it a bit funny how much trouble people think a puppy is. The fact is, we still have the crate I raised my golden in which means we have a free, very large doghouse for this puppy to sleep, eat and even house train. And, when she whimpers, we put blankets over the top and she simply goes to sleep. I've yet to be able to put a blanket on my daughter's head and no long hear whining. :) Yes, a puppy is work, but compared to what I'm doing already, she really isn't that much additional trouble. 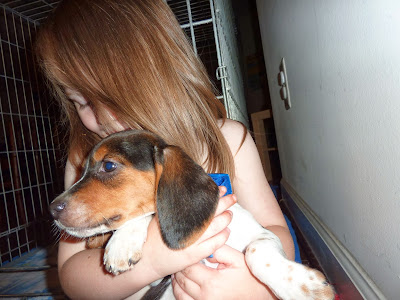 So, why did we get a puppy? A few reasons. First of all, I am a pet person. I've always had pets. I grew up with a dog and then added a stray kitten my brother found. In high school I cared for my fish tank, my turtle tank, my brother's fish tank and my other brother's turtle tank. I also had an iguana. That was a lot of tank cleaning though, so by college I was down to just our found cat and my golden retriever, Biscuit. (The fish and turtles were put into the pond behind our house and the iguana went to a local pet shop.)  And the cat and dog followed me to college and lived with us when we got married. But Biscuit began to grow tumors throughout his body, particularly in his chest and abdomen. When I was 5 months pregnant with Cecilia, the tumor in his abdomen had reached such a size, about a football, that it was cutting off his nerves and he couldn't feel his leg. He could't walk. He couldn't get up. And we said goodbye. He was just a couple months shy of his 10th birthday.

The following month, our 17 year old cat developed diabetes and went into a steady decline. The cat and dog had been very close, even sleeping side by side. Her liver began failing and she could no longer control her bowels. A week after Cecilia was born, we said goodbye to her too. We didn't get any pets again after that. We learned how to care for a baby, moved, had two more babies, moved again, had another baby, moved again, and had another baby. 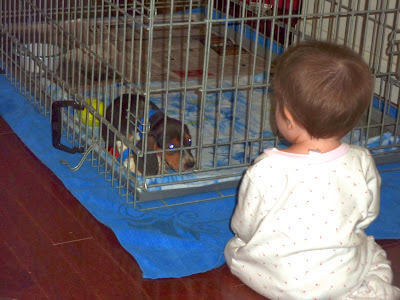 While parenting always has its curveballs, we are no longer new to parenting. I'm no longer new to homeschooling though I am always learning more. And we now have five children, a few of which have, for a few years now, been asking for a pet. I've been asked for birds, fish, turtles, bunnies, cats and dogs. I will never own a bird, just don't like them. And while bunnies are cute, my only experience with one was chasing it many times around a pool while it pooped every few feet. Fish and turtles are okay if the kids could do more with them, but right now they'd just be work for me and little for the kids to do. I do like cats, and would like one one day, but given the concern with toxoplasmosis, I'm not in the market for one at the moment. A dog we could do though.

And I do like the knowledge and responsibility that comes from owning a pet. Already the girls are learning how to properly handle a dog, how to feed her, what they can and can't do with her, and what they will have to do to take care of her. Cecilia has fed her. They have helped bathe and dry her. The oldest three have taken her for walks in the fenced backyard. I've even had Cecilia beg to be allowed to pick up her poop! (Why she has been limited, I'll explain later.) And, to make sure Rosie doesn't chew anything she shouldn't or have an accident on anything, my living room and dining room floors (the rooms she is restricted to) have never been kept so clean! Cecilia in particular has really stepped her game and been amazing with the puppy offering to do just about everything for her. 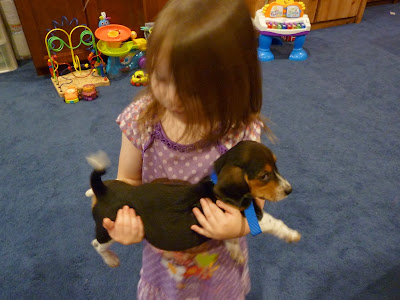 Another reason is that, while we currently live with my parents, we won't always and we never know when we will be moving or to where. It will all depend on James' job. When we do move elsewhere, I like the security of having a dog in the house, especially when James is not at home and it is just me with several young children. A dog not only can deter those who wish harm but will also alert me to someone's approach. Why not wait until we move to get a puppy? Well, would I rather do the puppy phase now where I am already set up with a fenced yard and in a decent rhythm or in a new home in a new place where I might not know anyone and have to gain my footing? It makes more sense to me to train her and get through the puppy part when you are secure and before you have to relocate and re-establish everything.

So, how has it been going? Generally well. The girls adore Rosie and play with her a lot. They take turns walking her, holding her and playing with her. She is a very gentle, laid back puppy, which I like and was one of the reasons I chose her over her sister. She lets the girls carry her at will and in almost any position. She certainly has her energy and loves to play, but never rough. We have had to implement some new rules. I spent the first two days shouting, "Teresa, don't hold her by her neck!" And it wasn't the kitty scruff of the neck hold, it was the choke hold. Fortunately she has gotten better and carries her like in the picture above now. Rosie also only gets run of the two rooms if Brigid is asleep or in her high chair or if an adult can supervise. The only bummer to our start with a puppy is that she does have a parasite. We took her to the vet on Tuesday to get checked out and she looks good except for this parasite which turned out to be coccidia, a common protozoan parasite that basically makes her tummy look big and makes her have diarrhea, sometimes pretty often. (Hence I don't want the girls picking up her poop at the moment.) She is on meds for that now and hopefully that will improve soon.

It is so precious watching the girls play with a puppy. So much life going on in this home!
Posted by Katherine at 12:22 PM