By the time we left the museum it was past 3pm and looking like this: 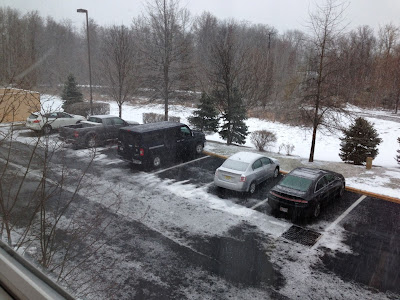 I picked up some Chick FilA for the girls and we hung out at my parents' hotel room for a wee bit. Brigid loved the mirror sliding doors to the closet, which strangely enough made you taller depending on which one you looked at.

By the time we left the hotel, it was dark, the snow was sticking and accumulating and forming slush and ice. We drove to the Seasons 52 in Cherry Hill, New Jersey for my dad's 60th Birthday Party. 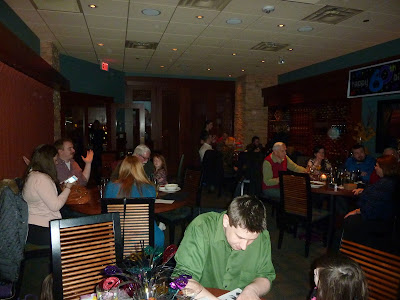 My grandparents, my aunts, uncles and cousins, my brothers, my four girls and I descended on the restaurant. It was great to see everyone and the atmosphere was lovely. I loved the wine racks on the walls and the fire by the door. 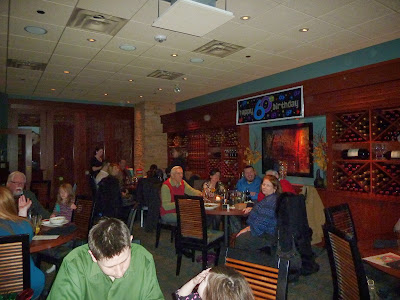 The flatbreads were delicious and the filet cooked perfectly. 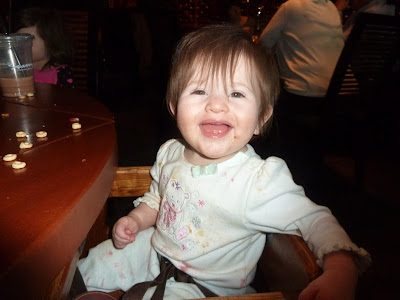 Brigid ate almost anything and everything stealing the tomatoes off my salad, strawberries and grapefruit from the kids' fruit plates and 2 chicken skewers from the appetizers. 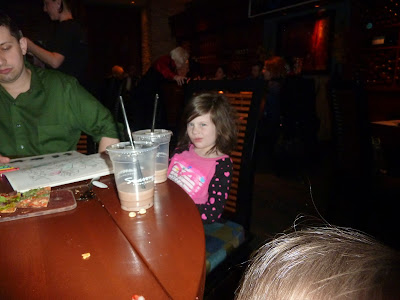 Unfortunately, Seasons 52, as good as much of their food was, is not really for kids. They do not have a kids menu and I can understand why. Although they did not add salt, their attempt at a mac and cheese for the kid was so salty it was inedible. Whatever kind of cheese they used, it just didn't work. They did well by the chocolate milk though. :) 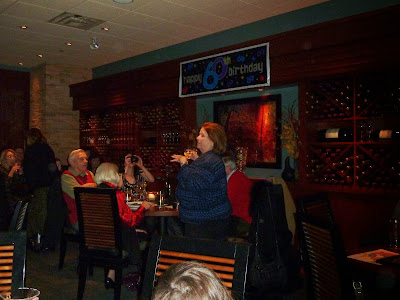 My mom gave a toast and we all raised our glasses. Except Brigid. And Cecilia. 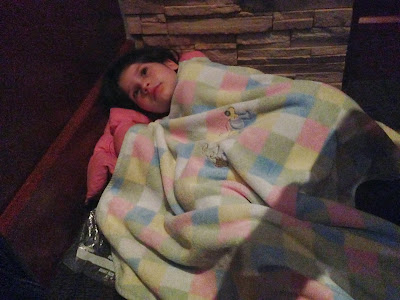 Unfortunately Cecilia began to feel ill even before the appetizers. She said her tummy hurt and began crying. I had her curl up behind me in the corner of the room using her coat as a pillow and Brigid's blanket as a, well, blanket and she fell asleep in no time. She woke up just before dessert but didn't want to move. After we sang Happy Birthday and my dad blew out his 1 representative candle, we had our mini desserts, but Cecilia wasn't doing any better.

After I carried her so she could go to the bathroom, I realized she seemed to have a fever. Two hours from home, without James, without medicine and in the rain, I gathered all the girls, said a very quick goodbye to everyone and asked the valet to get our car. The door handles had icicles on them. My suspicions were confirmed when I had all the girls in and buckled and Cecilia complained she was freezing cold. I blasted the heat and headed for home.

Now, it took about 2 1/4 hours and I drove very carefully avoiding other vehicles, puddles, and making sure I could see the lanes clearly, etc. But it was stressful. After an hour my back hurt and my hands and arms hurt from gripping the steering wheel as tightly as I was. I could have stayed at my parents' hotel. I could have stopped at a hotel along the way. Either of those might have been more tempting if Cecilia wasn't running a fever. I had no medicine for her with me. And, of all the girls, she has the most sensitive stomach. All the girls fell asleep almost as soon as I began driving and I knew, if I could just get us home, whatever she was sick with would be a lot easier to handle at home.  Even at a hotel, I'd have no medicine, I'd need extra bags if she threw up, I'd have no gatorade or crackers. The fact my phone was barely alive when we left wasn't lost on me either... the only charger I had with me was in the car. If I could only get home, everything would be a lot easier.

But getting there wasn't easy. I worked my way through an entire rosary and almost a whole chaplet of divine mercy before I began singing to songs from Frozen we had on repeat for the girls to fall asleep to, just to keep me as sharp as possible. Sometimes it wasn't really bad. There would be a light drizzle, very little traffic and plenty of lighting, but there was always the concern over ice. I couldn't ignore the icicles on the car door handle. I never did see or run into a single bit of ice, but there were spans of heavy downpour that necessitated slowing down.

We made it home safe and sound and got Felicity, Elizabeth and Brigid to bed, but Cecilia was still running a fever and feeling miserable. We did get her some medicine and then got her set up to sleep in the living room (an upper bunk bed is no where to sleep when you feel like you might throw up). I slept on the sofa beside her.

This morning her fever was up to 101.2 but she hasn't thrown up and has kept a muffin down. By the afternoon she was playing video games and asking what the treat was this Sunday. So I think she is improving. ;) Now if I can just get my dad's present wrapped and his cards signed before he gets home tomorrow. :)

Posted by Katherine at 3:33 PM