At least in this diocese.

Cecilia spent a fair amount of time last year earning her Family of God medal, a Catholic medal scouts can earn. She was awarded her medal at our parish scout Mass on February 1st: 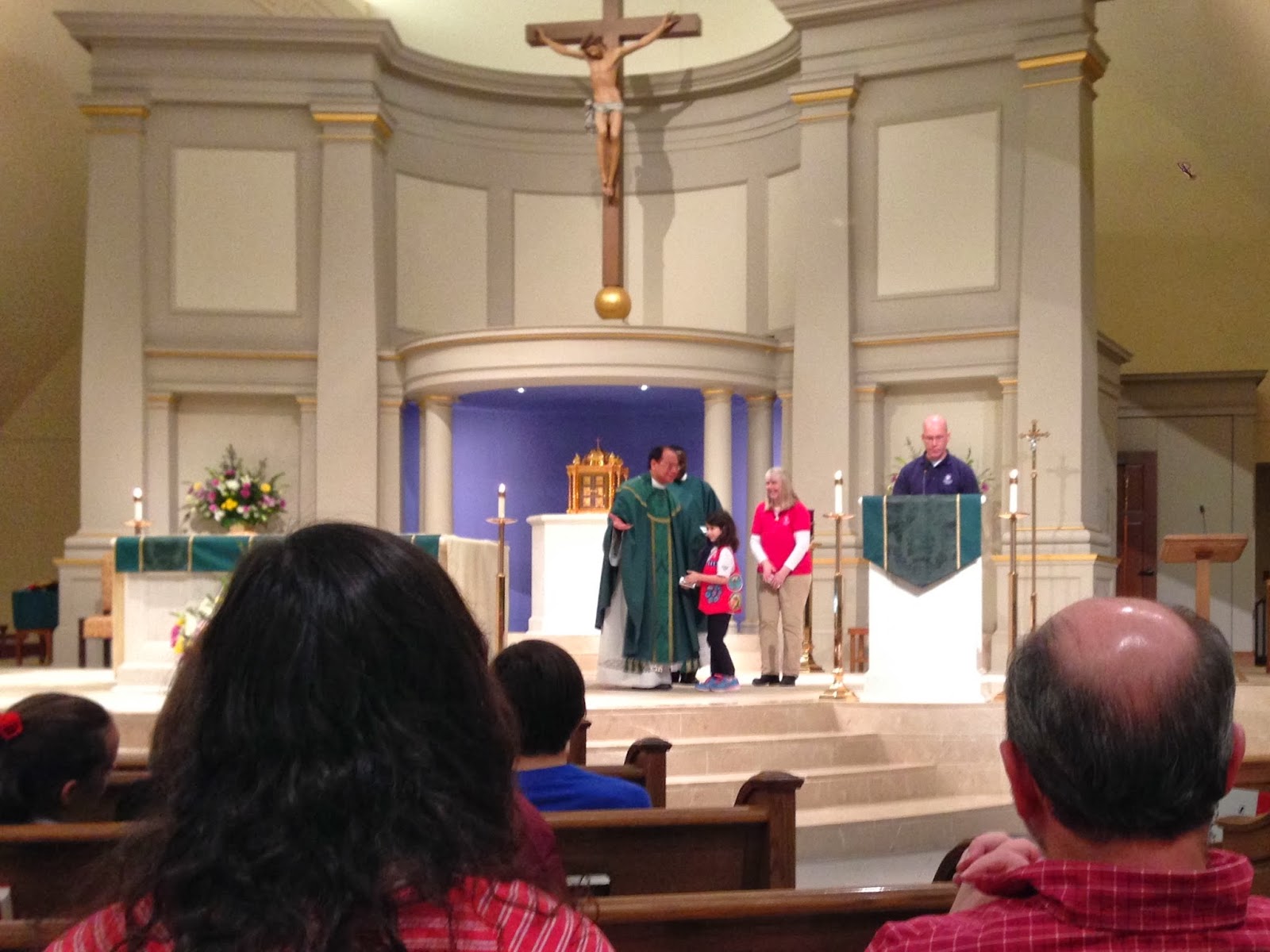 It was basically Mass with the awards distributed after communion. There were about a dozen recipients. 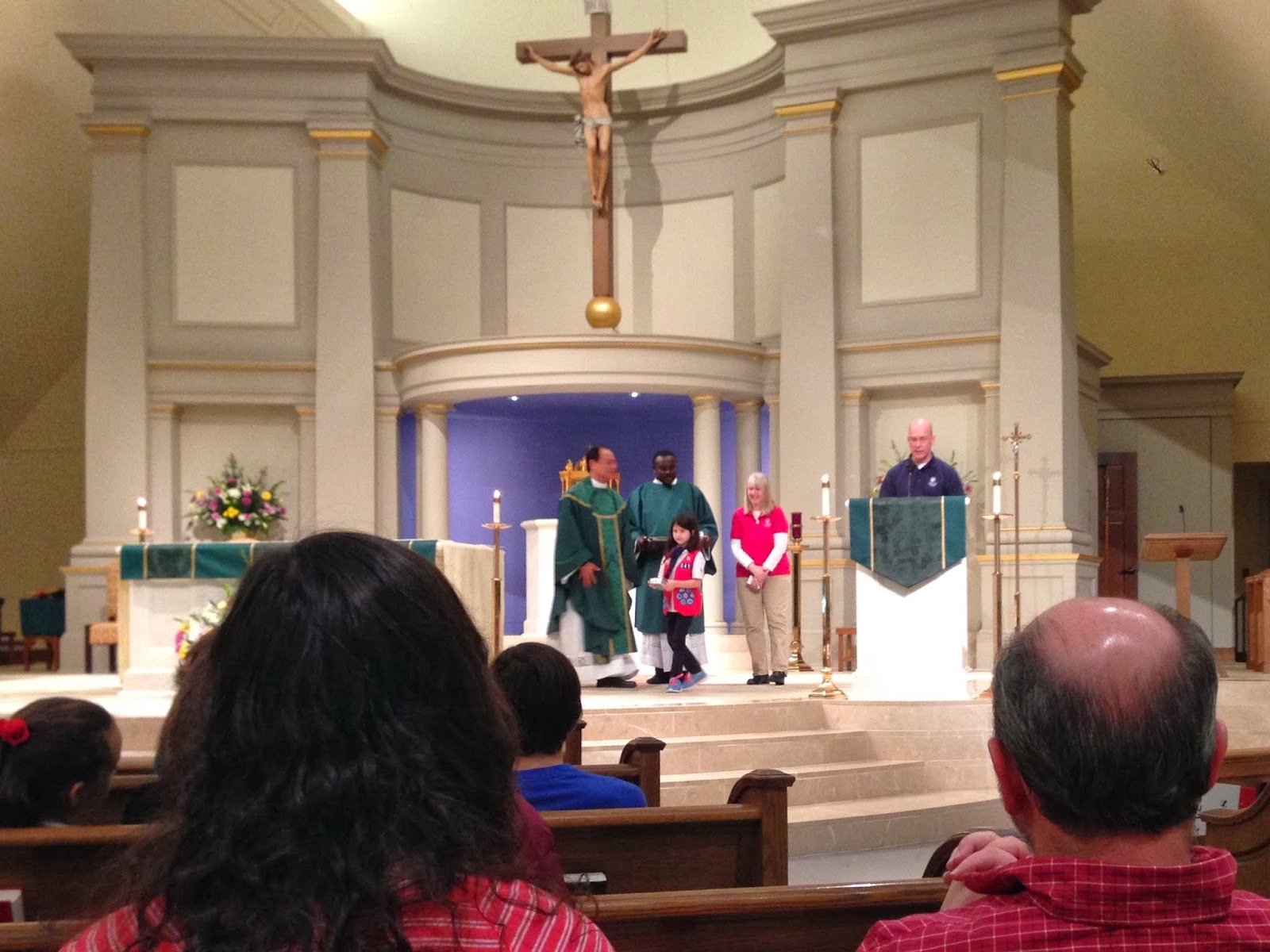 It didn't take long, was tasteful and fully respected the Mass. Cecilia helped bring up the gifts and it was a wonderful experience.

We were asked if we would attend the diocesan scout Mass, primarily because our AHG troop is only 1 1/2 years old and they are trying to spread the word about our presence and what AHG is. We didn't know if the Archbishop would be there but we were told a bishop would be there to bless the medals. Cecilia was asked to carry the AHG flag and, after all the flags were posted, the AHG girls would recite the AHG oath. We were asked to be there an hour early to go over everything beforehand and that we would begin at 1:55 to get the flag ceremony done before starting Mass at 2pm.

Nothing went the way it should have. It was a mess.

Cecilia, Felicity and I arrived at 1pm. And waited. After about 15 minutes, a committee member of the scouting committee took Cecilia to the ambo and, I assumed, gave her instructions about what she was to do. Cecilia wanted, rather than sitting with us, to sit with her troop, so she joined them until it was time for her to get the flag and head to the back of the church.

Around 1:30 an ensemble gathered just to the right of the altar and began playing. It was so loud I couldn't read let alone pray. And it was awful. We had lapsed back into the 70s complete with tambourine. I kept waiting for The Folksman to walk in and start singing "Never Did No Wandering."  The irony couldn't have been thicker in this recently renovated church named for Pope St. Pius X,  who restored to prominence Gregorian Chant during his pontificate. I prayed to Pius X to unplug their cords to the speakers, but, evidently, he thought Lent began early.

A 2pm Mass is already a challenge for anyone with a toddler or infant and, having both, it wasn't surprising that both didn't handle the late mass well. Felicity, having been sitting there a while, was bored by the time the service began 10 minutes late. But Cecilia did an outstanding job carrying the flag: 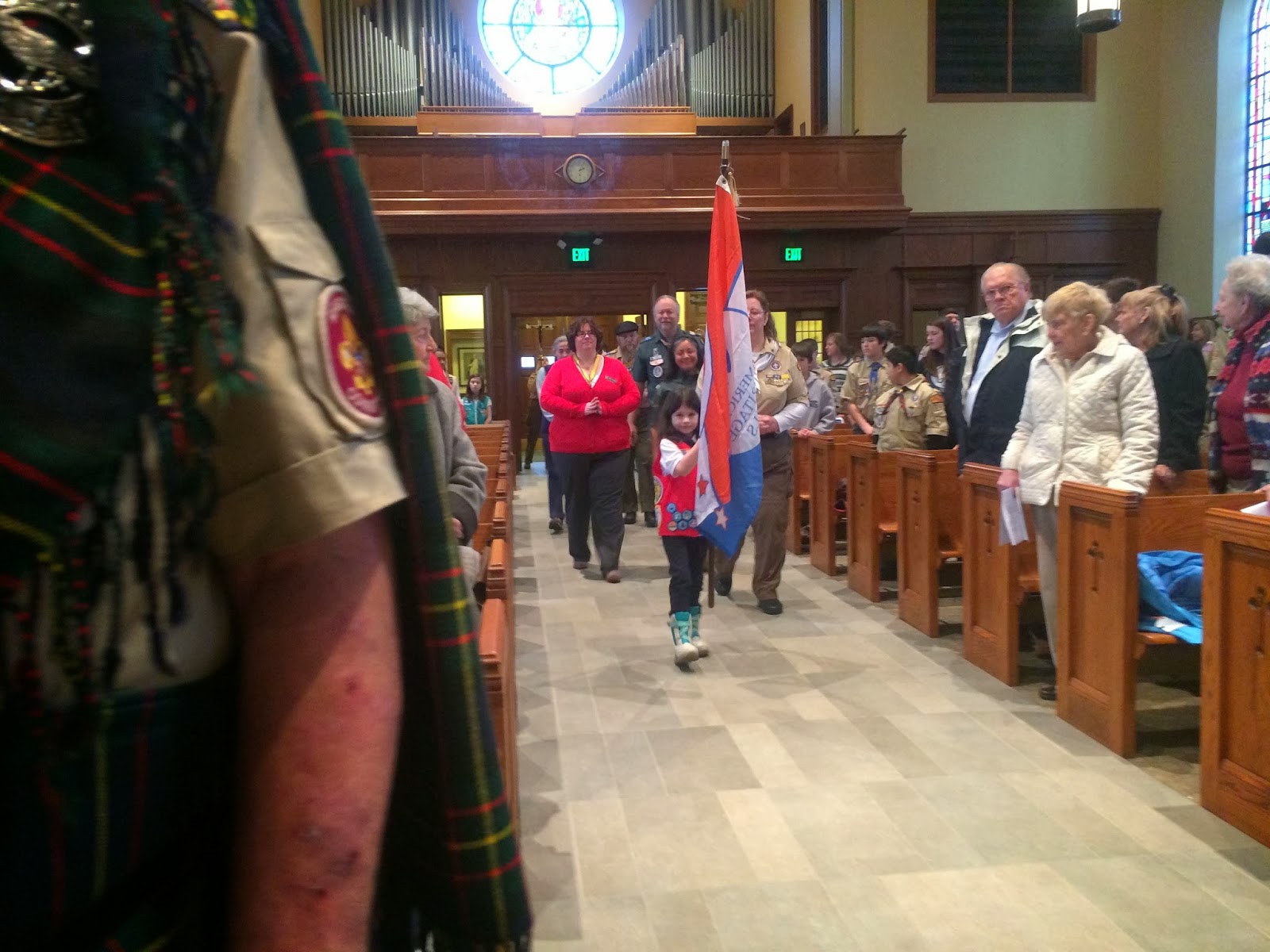 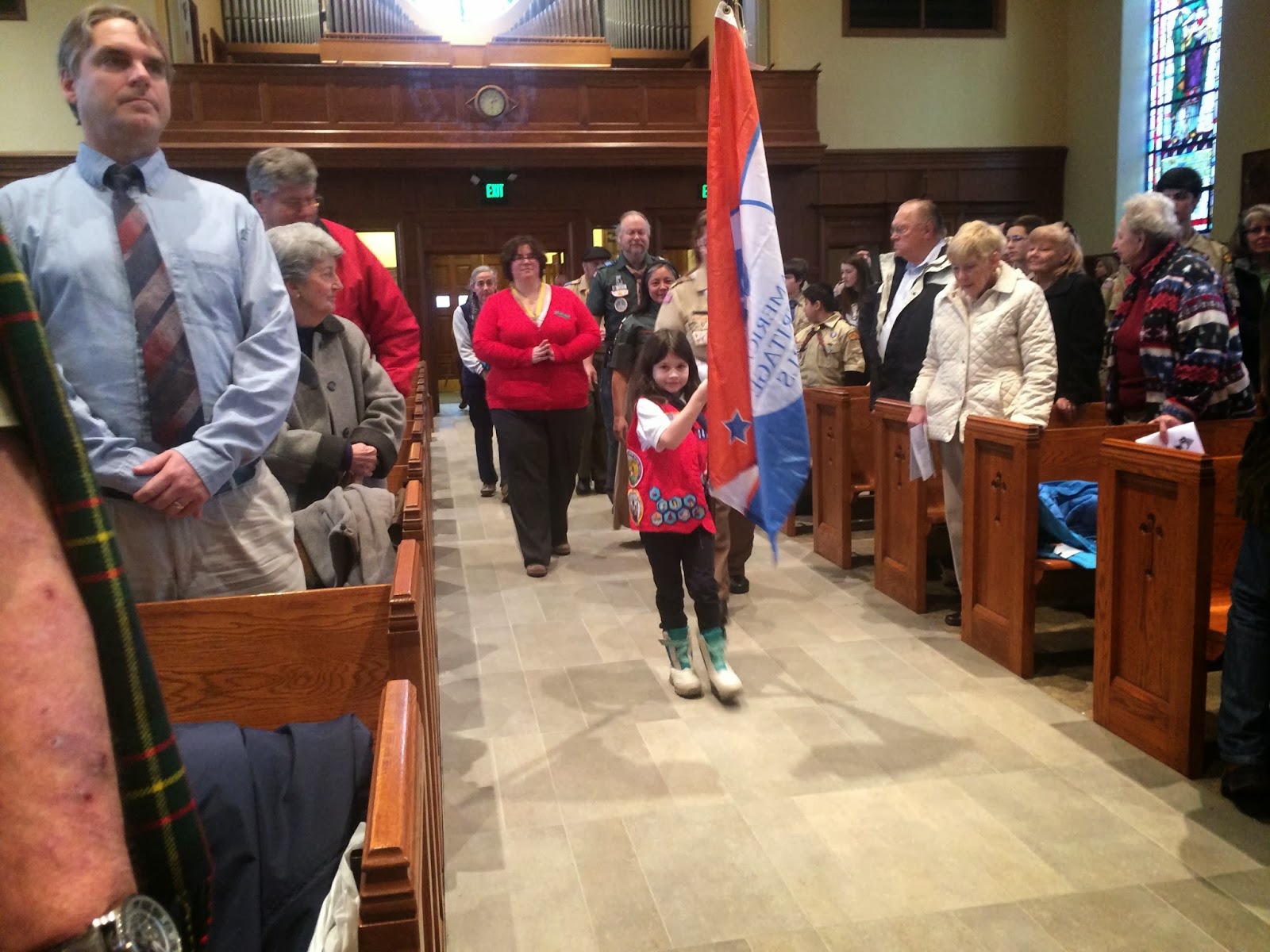 Once the flags were posted, the cub scouts and boy scouts recited their oaths, and a girl scout was supposed to say her oath but mass confusion ensued. Not only did no girl scout approach the ambo, but a boy scout urged Cecilia to ambo and told her to read the Girl Scout Promise. 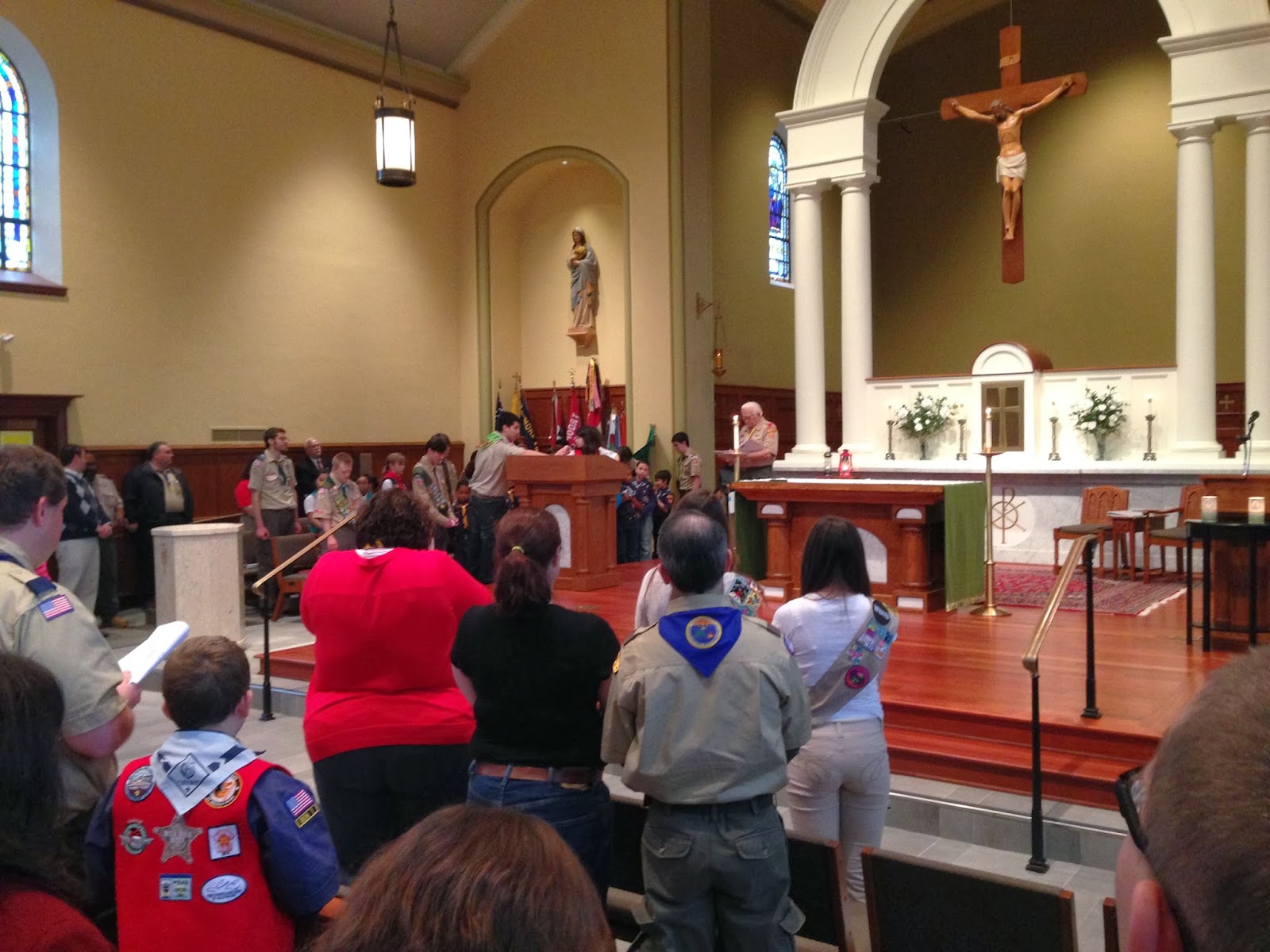 Cecilia, understandably confused asked, "What?" The woman in front of my dad turned around and asked, "What? Doesn't she know her own oath?" 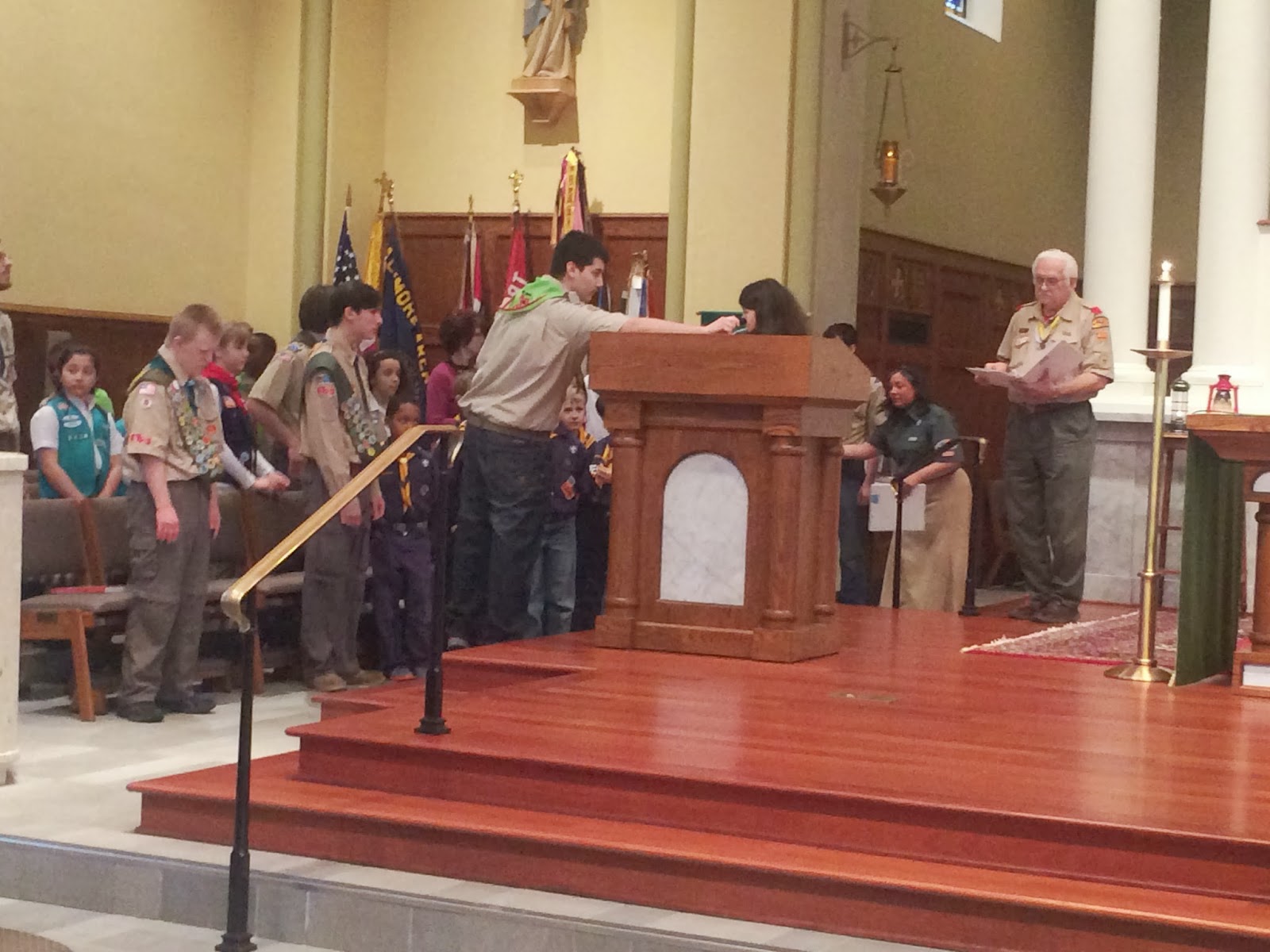 And then a boy scout leader came up and again told her to read the Girl Scout Promise. 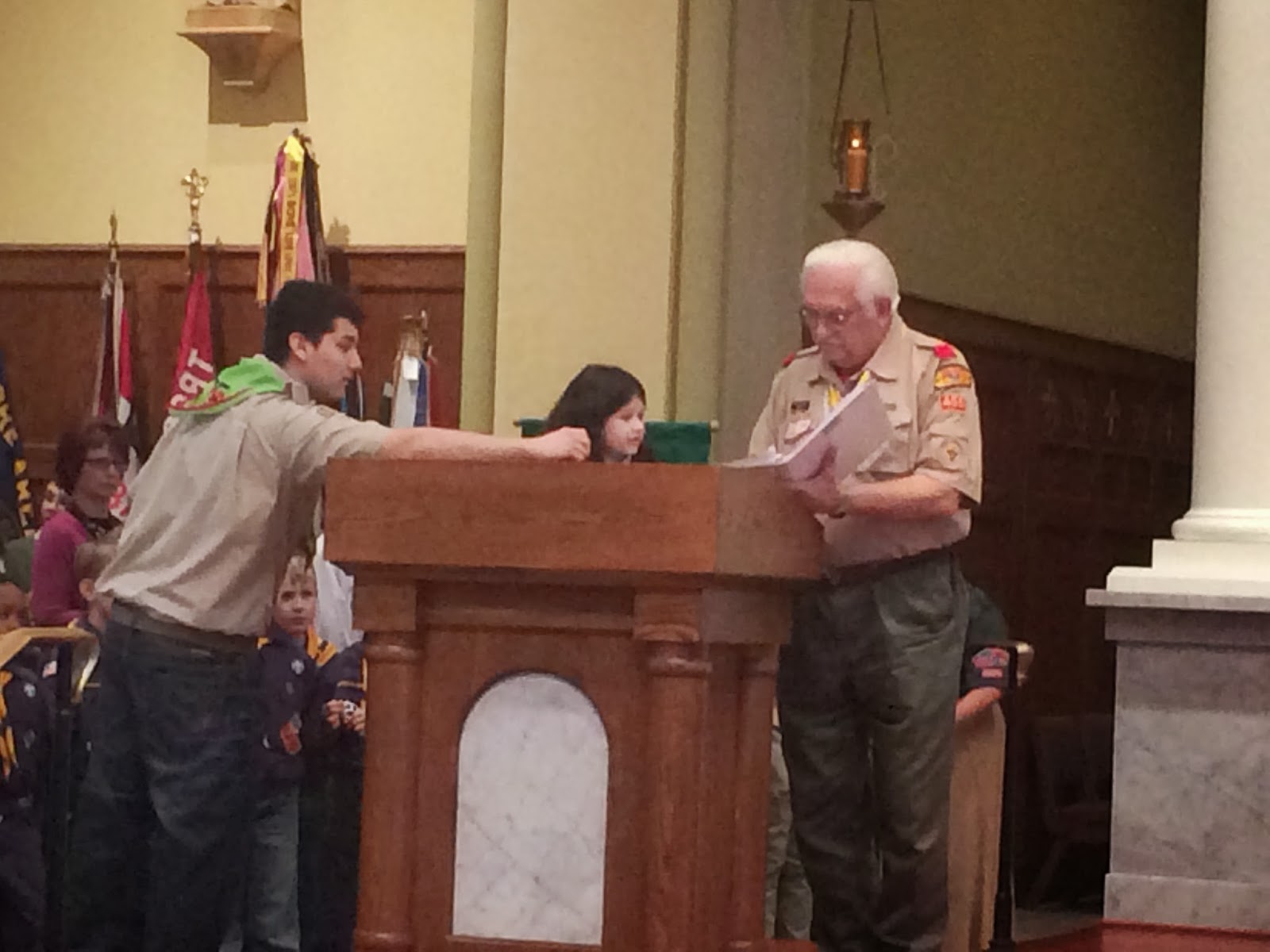 Cecilia has never seen the GS Promise, and had no trouble reading it, but she was so confused. She tried to step down but they asked her step back up and read something else, which again was not the AHG Oath. Cecilia has known the oath for over a year but had been practicing and practicing to make sure she would get it right. She was supposed to recite it with at least one other if not two AHG girls there, both of whom were older, but neither stepped forward. Afterwards, I kept looking for Cecilia. I was so upset. The two adults at the ambo didn't even know she was an American Heritage Girl and no other adult who did was up there to help. It was disorganized and confusing and my 8 year old was caught in the middle of it in front of a full church of, mostly, strangers.  (I was further annoyed for an additional reason. My girls are in AHG because I don't want them having anything to do with the GS and here they have her reciting the GS Promise at Mass.) I couldn't find Cecilia though. I didn't see her with the other AHG girls. Then I turned around to see her clinging to James crying.

She said she was so confused and so embarrassed. We reassured her that it was not her fault at all and she did a wonderful job reading, but she didn't calm down until after the presentation of the gifts. But since, by then, Brigid and Teresa were melting down, Cecilia accompanied James and I to the narthex with the two little ones. In the narthex, the committee person apologized to Cecilia that it didn't go quite as they hoped but told her she did a good job and "performed an act of charity" reading the GS Promise for the girl scout, whom apparently was too scared to go up because she didn't know her own Promise. Cecilia forgave her but was still very uneasy. I took the three of them for a walk downstairs into the social hall that was set up for a reception. I found a gorgeous tabernacle left to the side, I guess after the renovation: 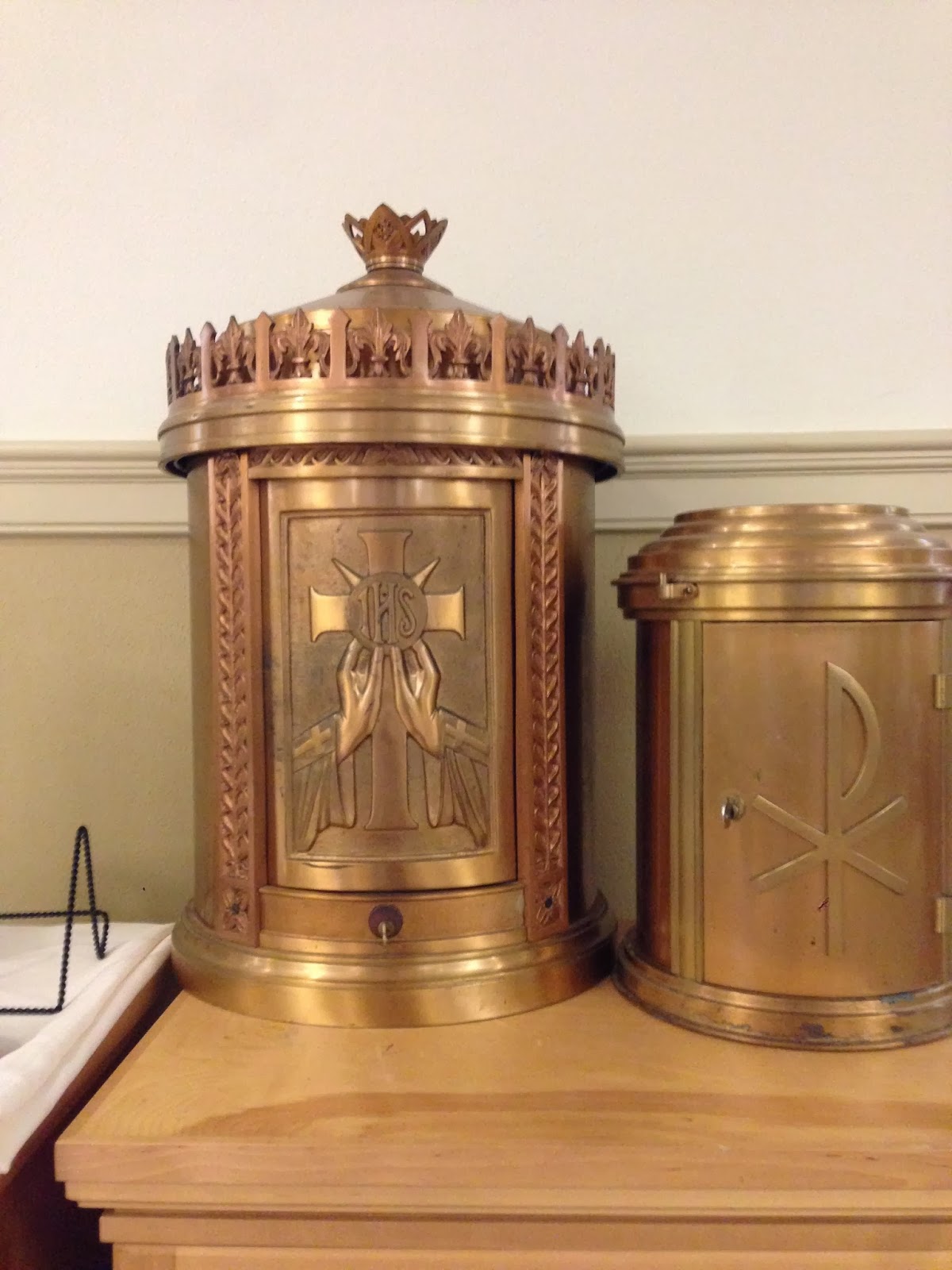 Such a shame considering the dull one they have in the church.

We also saw the cake for the reception. And I was quite irritated by it. First of all, if it is the Archdiocese of Baltimore's Scout Mass, why put the Archdiocesan shield in the corner and a portrait of Pius X in the middle? Was the location that important? Why? It didn't make any sense. 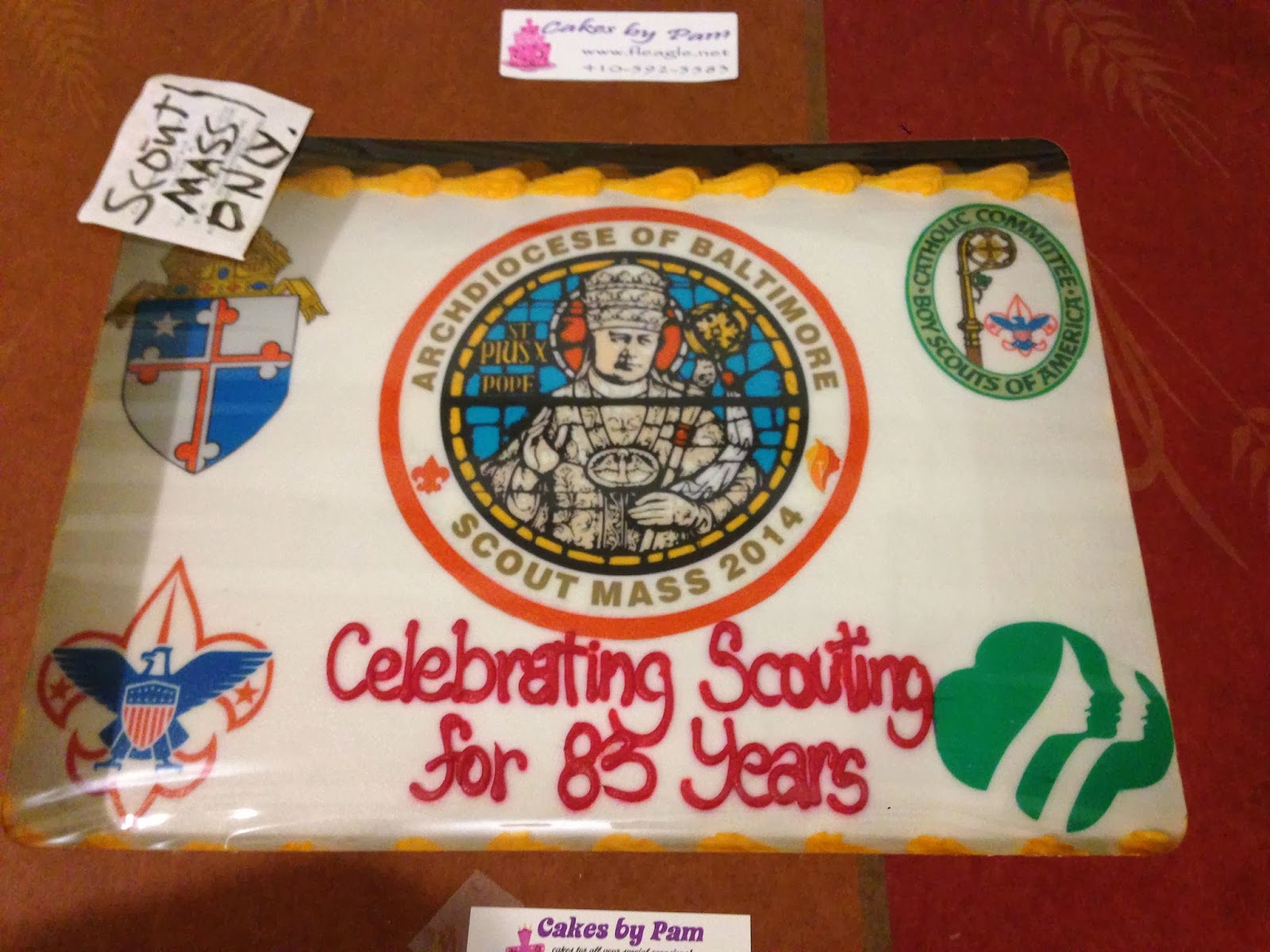 But more than that, there was the emblem of the Catholic Scouting Committee, okay, but why the Boy Scout Emblem and the Girl Scout Emblem? Either include all the groups emblems or none at all. No AHG emblem was on the cake. It was not lost on Cecilia either. We were told we were wanted there to represent AHG but the AHG Oath never got read and we clearly weren't thought of when they ordered the cake. At least our flag was there I guess but the whole event seemed to be one disappointment after another.

Teresa was overtired and wouldn't calm down, so James took her to the car and never even got Communion. I took Brigid and Cecilia back to the pew. After communion, Bishop Madden blessed the medals. 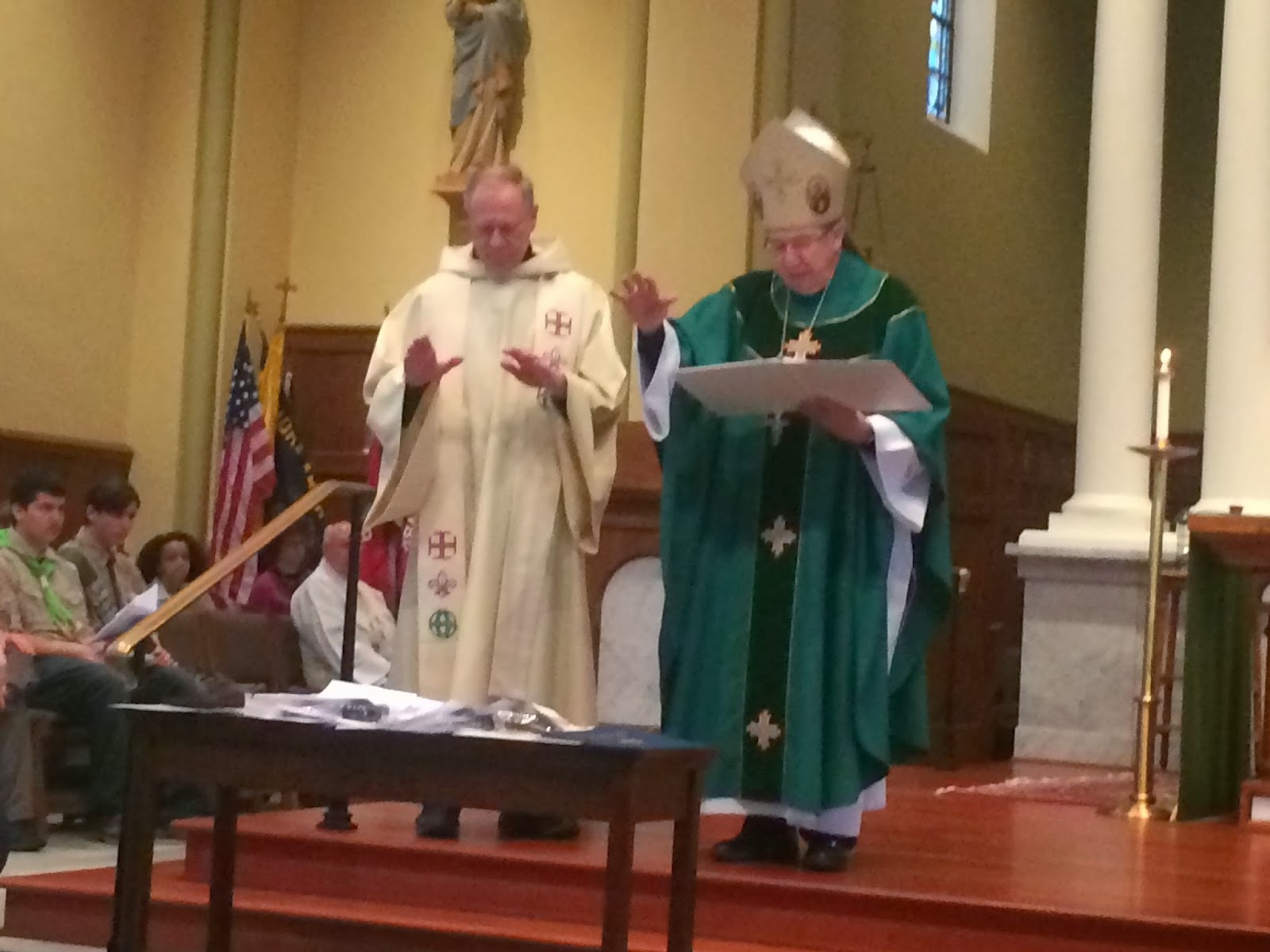 There was more confusion over the awards and the woman in front of my dad again turned around and asked, "Do you go to this parish?" When he responded in the negative, she said, "Oh, well, then they won't call her." (That lady must have some issues.) Three seconds later, they called Cecilia's name to receive her medal. 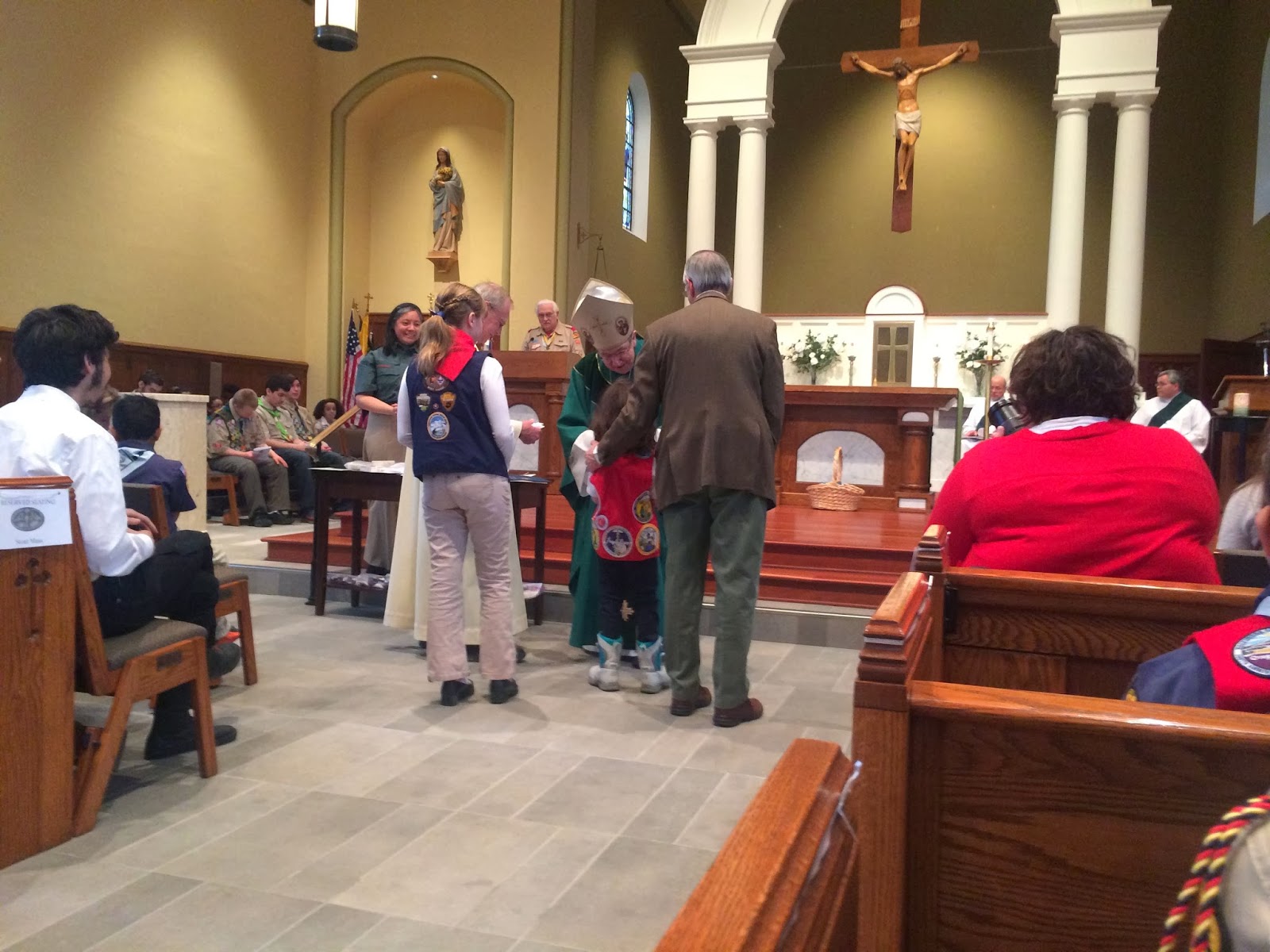 (You can see the tabernacle they used for the renovation here.)
The Bishop, bless his heart, congratulated Cecilia and then handed her a medal. She looked at it and just said, "Um, this isn't mine." Sure enough, they had given her the wrong medal back. 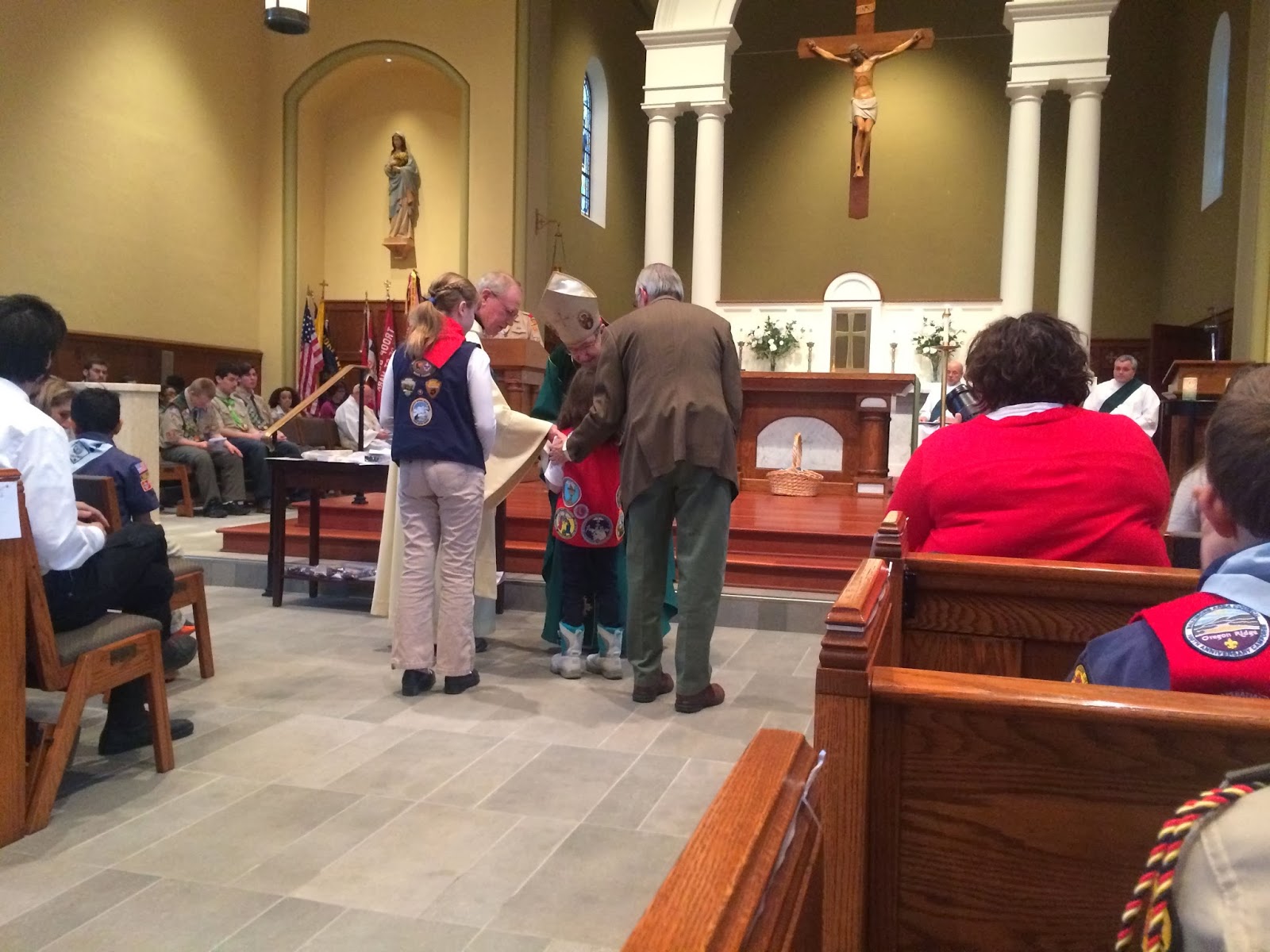 I don't blame the bishop and he took it all in stride and joked to her that she knew what was going on better than they did, but it was sadly true. The whole event was so poorly planned, so poorly organized that it was exhaustingly unpleasant.

By 3:30, after over an hour and a half after we were supposed to start, they were still giving out awards. And when they finished that, they called up the Jewish Scouting representative for a presentation. By then all my kids were dropping like flies, crying and whining was running rampant and I had had it. We had been asked to linger afterwards for pictures, but we simply left. We had less than 2 hours to drive in the rain over 30 minutes back toward home and get the kids dinner before Cecilia and Felicity were supposed to be at an AHG meeting.

Never again, at least in this diocese. If you are going organize something for kids you need to organize it and not expect it to simply come together. An 8 year old is not usually going to be able to improvise to cover for the confusion being poorly organized will cause. Up until now, Cecilia has always jumped at the chance to read in front of others, including leading our AHG ceremonies, (of which I have a video from last week but I've used too much of my vimeo space to upload it at the moment, but I'll get it up soon). I'm hoping this will not deter her in the future. She has already said she doesn't want to read like that again, but I'm hoping she only means in that church or something. Sigh.