I've been planning for a couple of months to try to do as nice a unit as possible for an 8 year old and a 6 year old on the American Revolution. I'm rather pleased with how it has gone.

We began by reading about the events leading up to the American Revolution and the war itself in The Story of the World. We read Longfellow's The Midnight Ride of Paul Revere. We read parts of the Declaration of Independence and practiced writing with a feather pen. 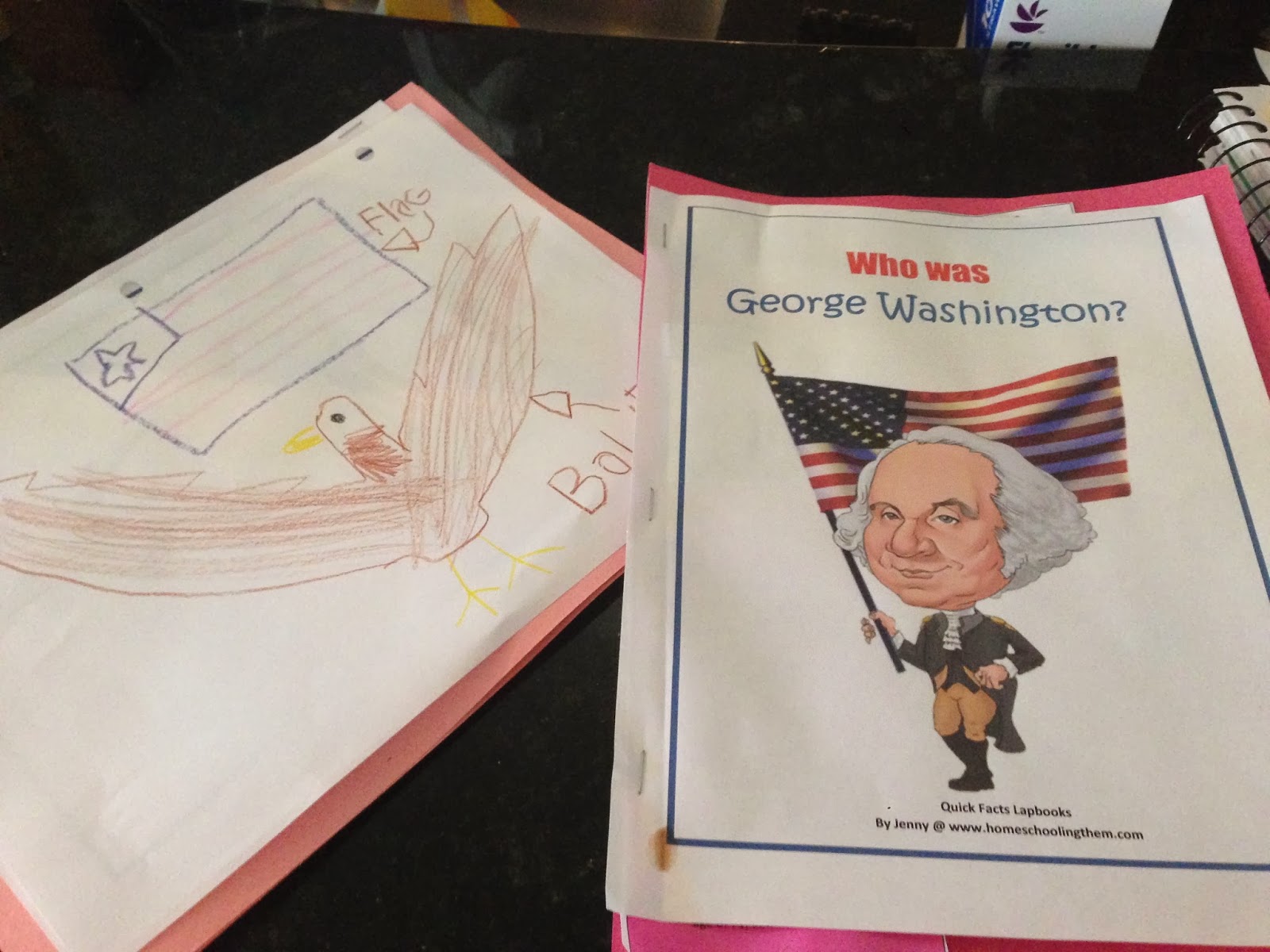 We watched parts of the musical 1776 and made a booklet about George Washington. We watch Driving Through History's pieces on John and Abigail Adams, George Washington and Benjamin Franklin and various aspects of the Revolution. We read the story of the Liberty Bell (which we have visited even if they didn't remember) and built playdoh models.

From the library, we checked out
Henry and the Cannons: An Extrodinary True Story of the American Revolution by Don Brown (A remarkably true story of how Henry Knox brought 59 cannons weighing over 120,000 pounds about 300 miles to help General Washington rescue Boston.)
DK: American Revolution (I love the DK series as a reference resource.)
Yankee Doodle, illustrated by Robert Squier (This one was pretty unnecessary. It is simply an illustrated version of the song.)
Yankee Doodle by Steven Kellogg (This one was much better. It included the history of the song, which originally was a British mocking of the colonists, as well as all the verses with illustrations.)
Great Women of the American Revolution by Brianna Hall (In a house with five girls, we always have to consider where the females are in history and this was a very informative but simply formatted book on some of the women who were true heroines in the war and how.)
George vs. George: The American Revolution as Seen from Both Sides by Rosalyn Schanzer (A look at the war from both sides.)
Colonial Life by Brendan January (A nice look at what colonial life was like from homes to foods to medicines, etc.)
What's the Big Idea, Ben Franklin? by Jean Fritz (The story of Ben Franklin.)
And Then What Happened, Paul Revere? by Jean Fritz (The story of Paul Revere.)
Will You Sign Here, John Hancock? by Jean Fritz (The story of John Hancock.)
Shh! We're Writing the Constitution by Jean Fritz (The creation of the Constitution and the birth of a new nation.)
Can't You Make Them Behave, King George? by Jean Fritz (From the perspective of King George.)
Let it Begin Here!: Lexington & Concord: First Battles of the American Revolution by Dennis Brindell Fradin (The battles of Lexington and Concord and the beginning of the American Revolution.)
Boston Tea Party by Pamela Duncan Edwards (I can't say this would be my preferred way to tell the story of the Boston Tea party. Truth be told the writing irritated the heck out of me, but it was the only one our library had. It will do if it is all you have, but I have to believe there is better out there.)
Liberty or Death: The American Revolution, 1763-1783 by Betsy Maestro and Giulio Maestro (A nice narrative overview of the entire war from taxation to victory with illustrations and maps!)
American Revolution: A Nonfiction Companion to Revolutionary War on Wednesday by Mary Pope Osborne and Natalie Pope Boyce (I thought Cecilia would like this as she likes the Magic Tree House books, but I think she prefers her tree house books more fantasy. I don't think she ever picked this one up.) 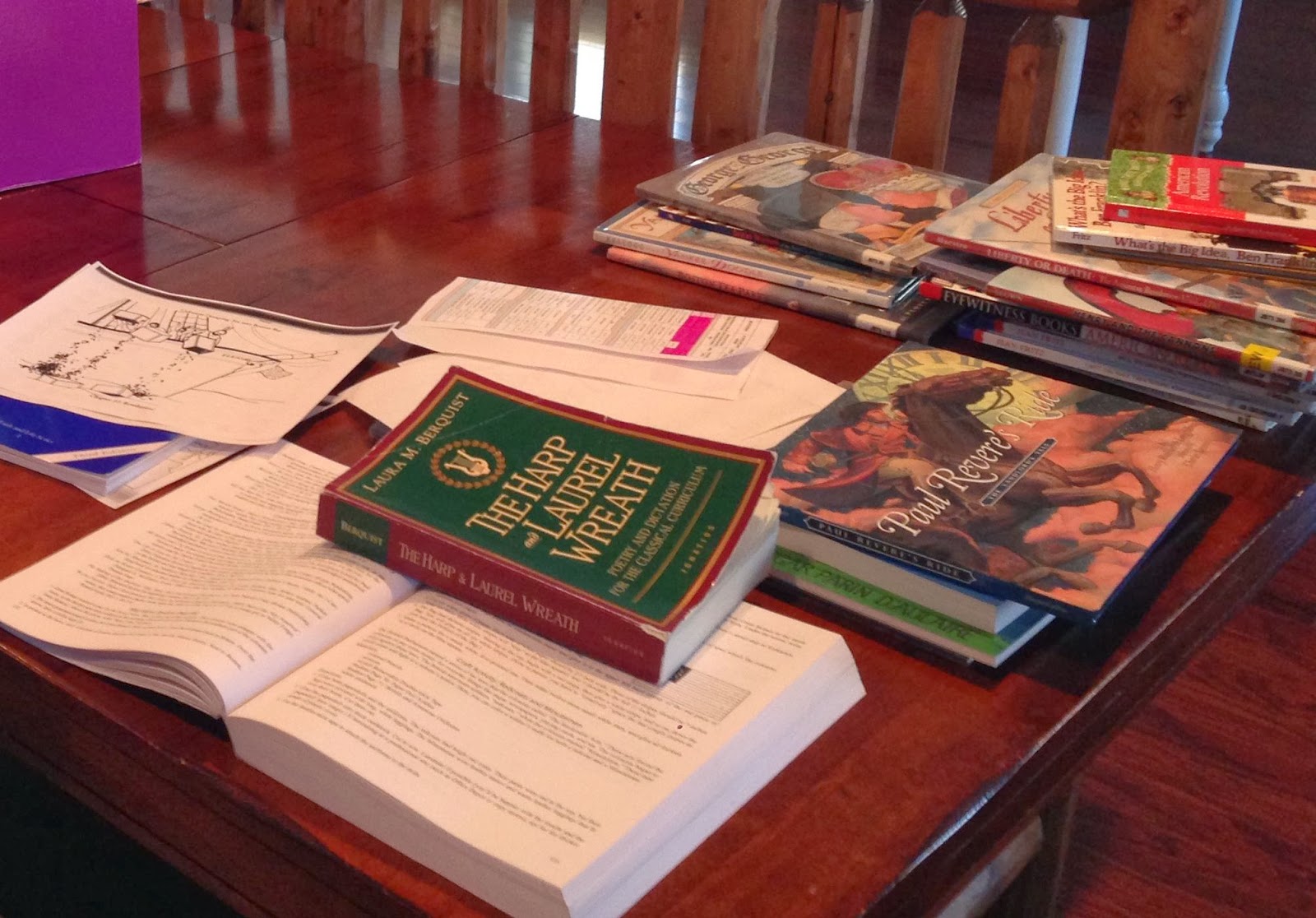 And I owned or purchased:
Paul Revere's Ride by Henry Wadsworth Longfellow, illustrated by Charles Santore. (It is the classic poem with lovely illustrations. It was a nice addition to tie a bit of poetry to our history unit.)
George Washington by Ingri & Edgar Parin D'Aulaire (I love this biography of George Washington and the illustrations are classic.)
George Washington's WORLD by Genevieve Foster (This was a bit too much for us this time around but I expect it will be very useful when we come back to the subject in a few years.)

I also found the Liberty Kids series on Amazon for all of $7, which the girls really enjoy.

Then, of course, we took our Spring Break trip to Colonial Williamsburg. Cecilia still runs around wearing her tri-corner hat with a blue feather in it declaring herself an 18th century girl.

We are still watching Liberty Kids episodes and the Driving Through History DVDs, but I do think, after almost 3 full months, we've done justice to the American Revolution and the girls have learned a lot and did enjoy it. I do think a trip to Boston would be a welcome addition to our unit, but it is too far a hike during the school year. Maybe in the summer, but we will see. Right now I think we may be winding down from our unit. Three months is quite a while to spend on one subject with such young students. :)

Posted by Katherine at 6:48 PM