Teresa and the Zoo

On Holy Saturday we finally managed to get to the zoo in celebration, even if belated, of Teresa's 3rd birthday. 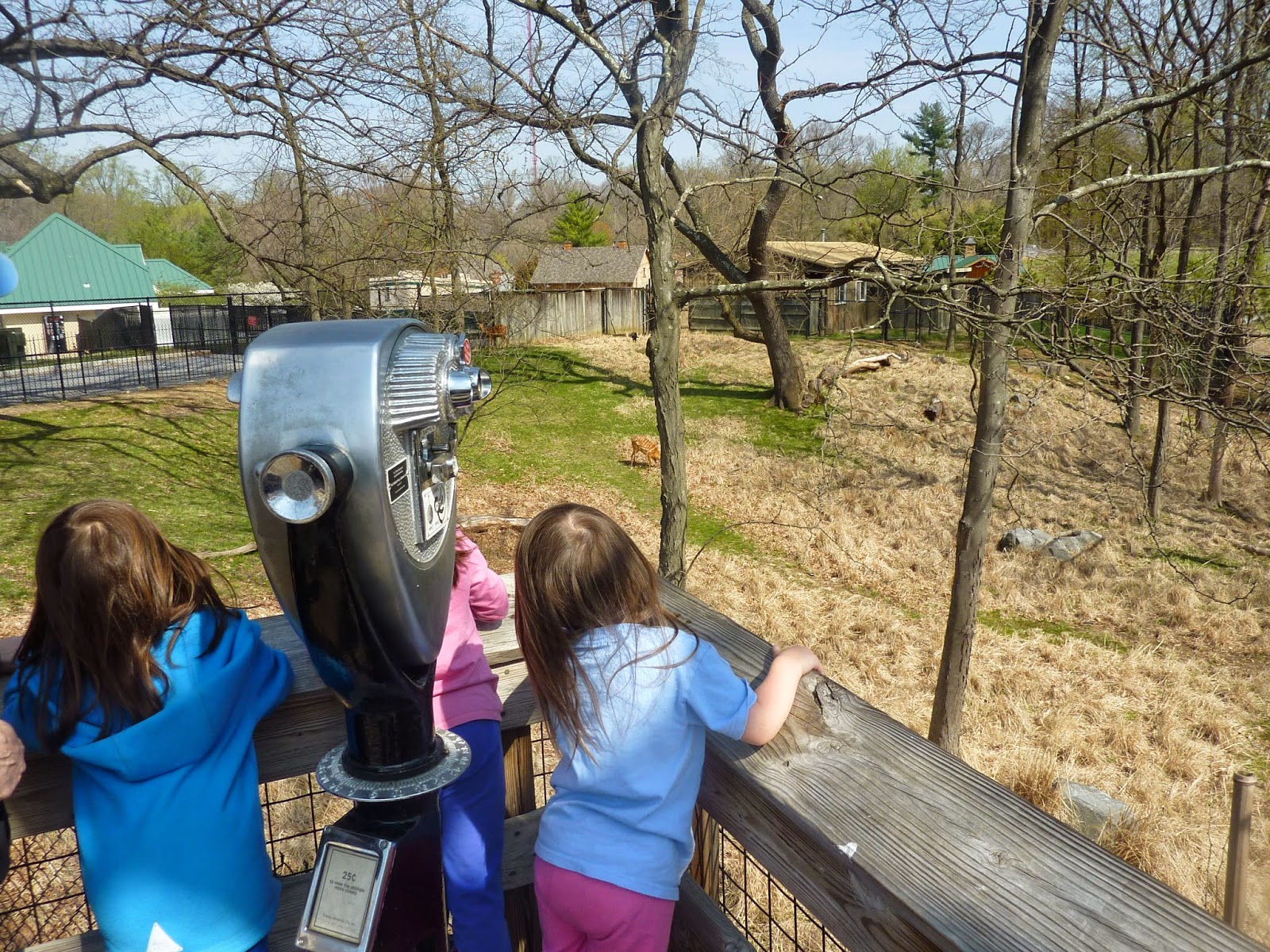 She had an absolute blast. 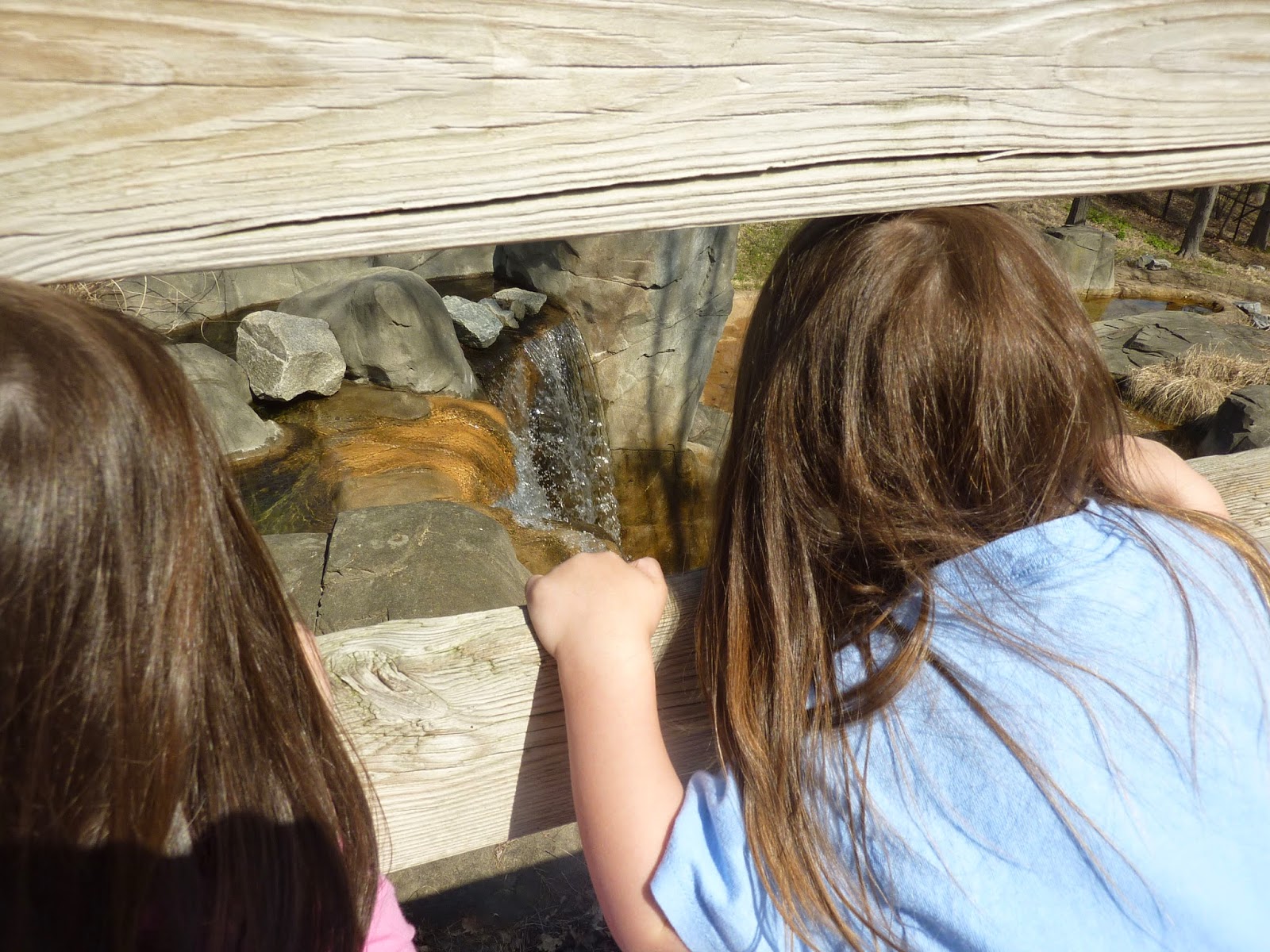 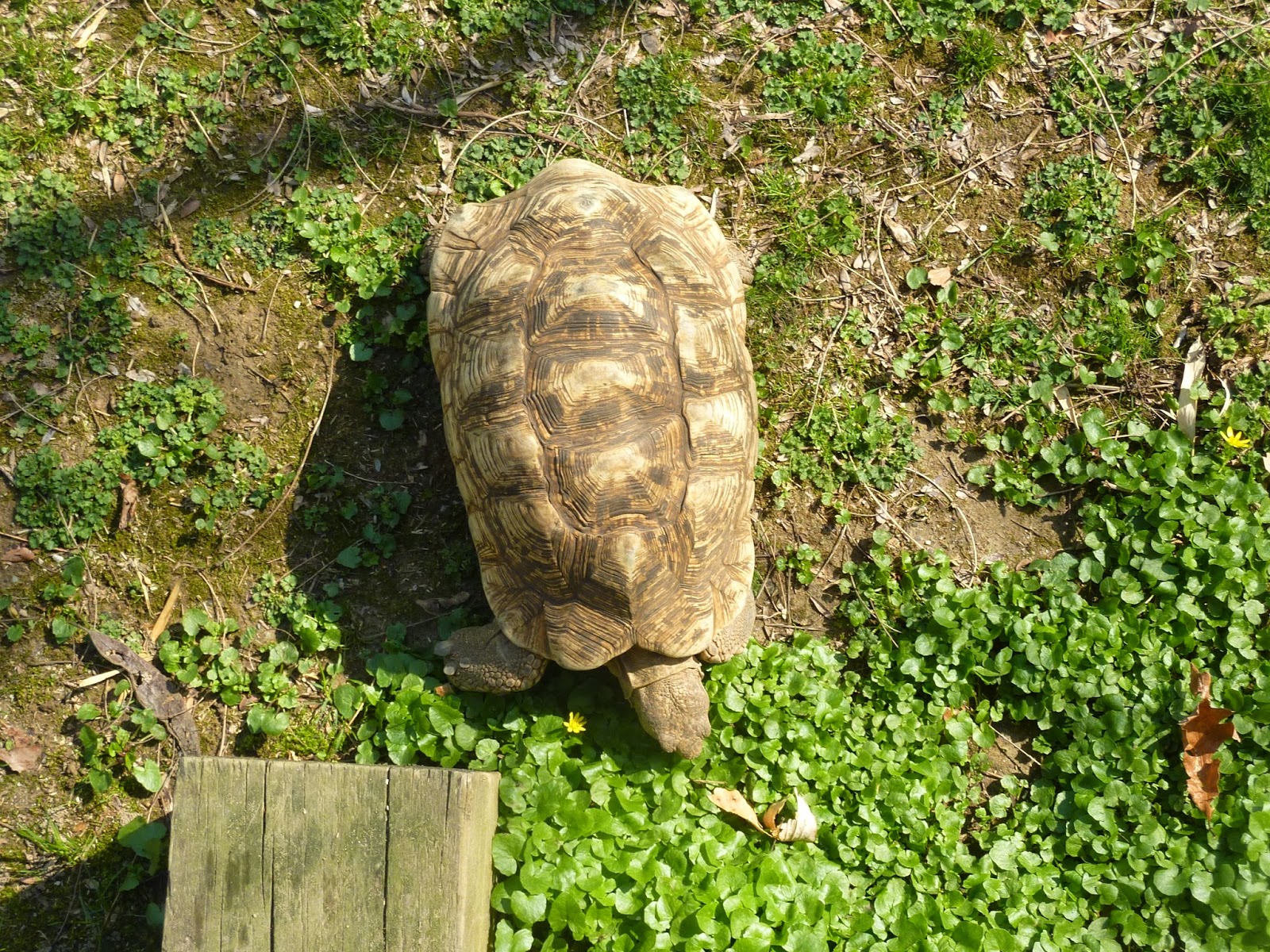 She was fond of the turtles and, despite the the cobwebs between this one's head and shell, insisted the four in this pen were in fact the Ninja Turtles. 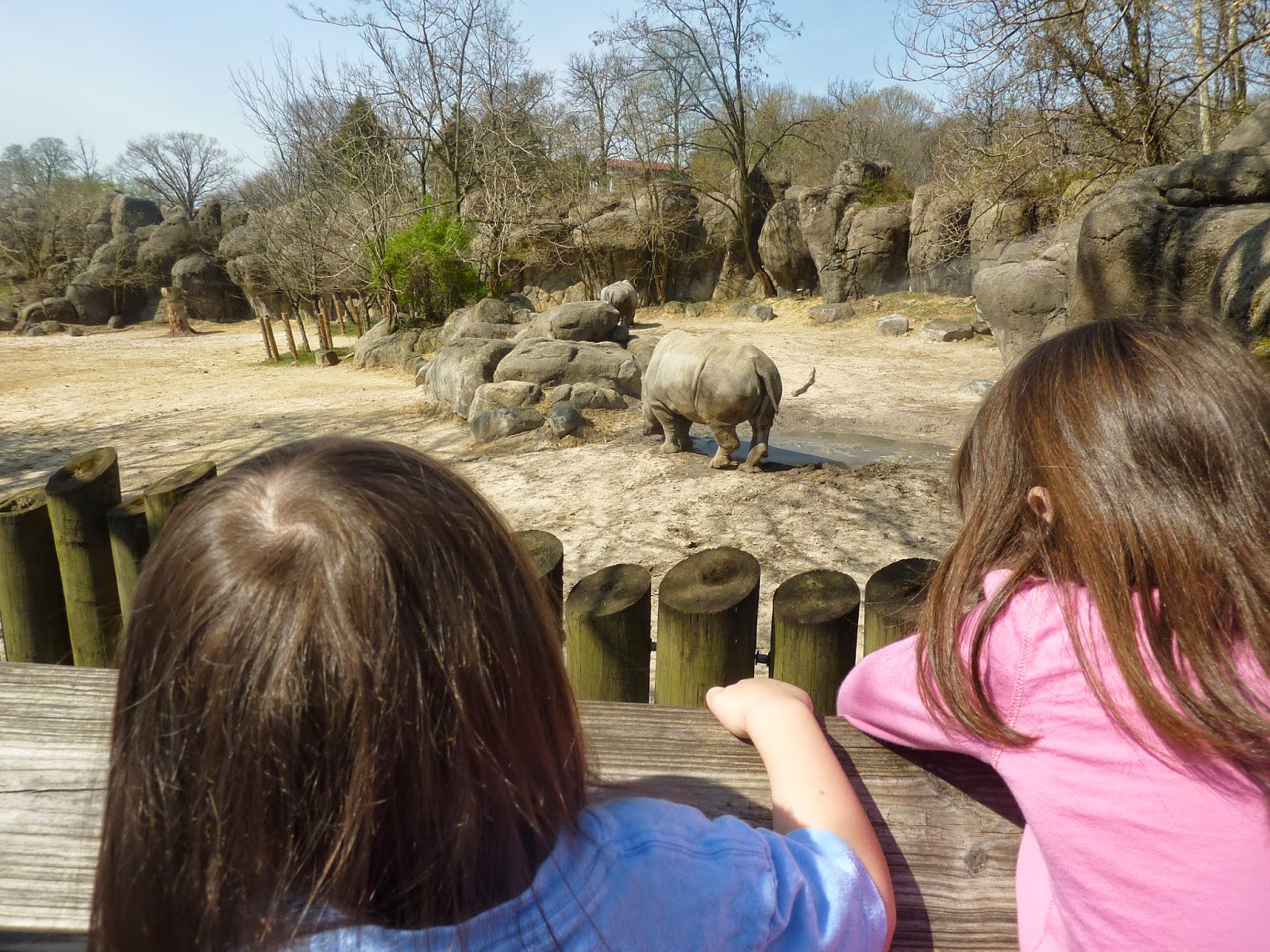 The rhino gave us a close up of his rear, but the zebras in the pen made up for it trotting around. 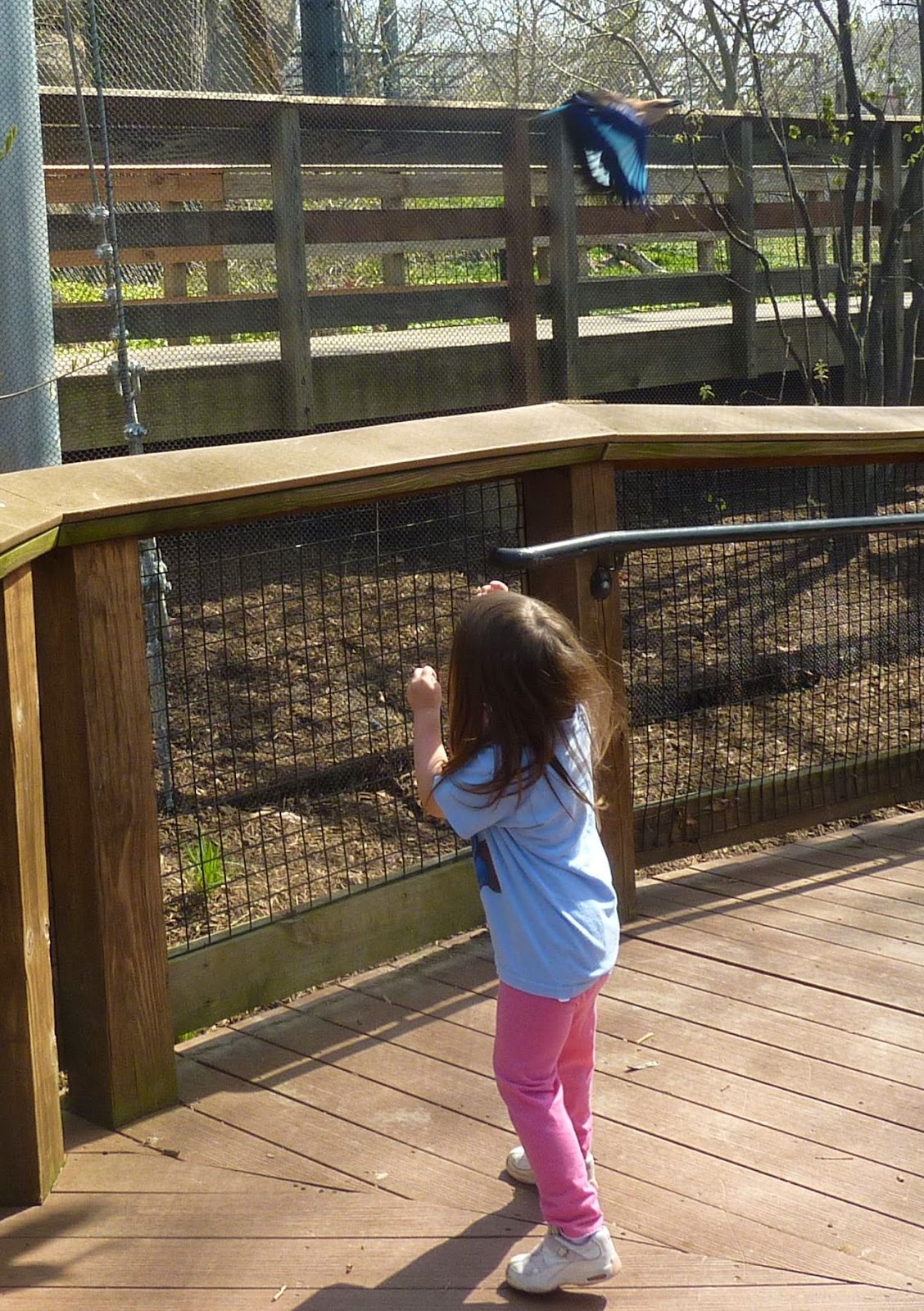 Teresa chased this bird around the aviary. He was a great sport about it though and so pretty to watch. 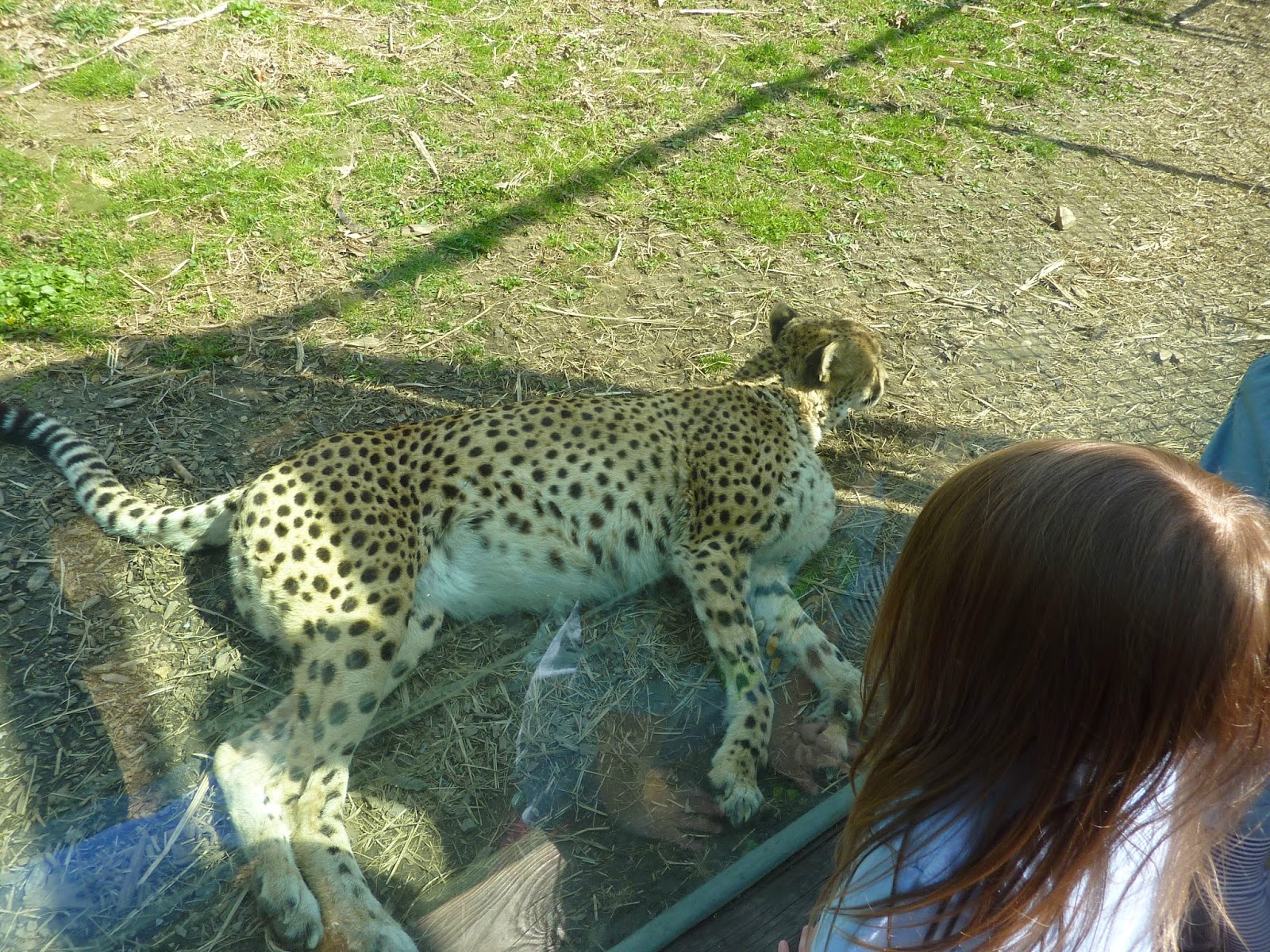 The cheetah couldn't have cared less that we were there. 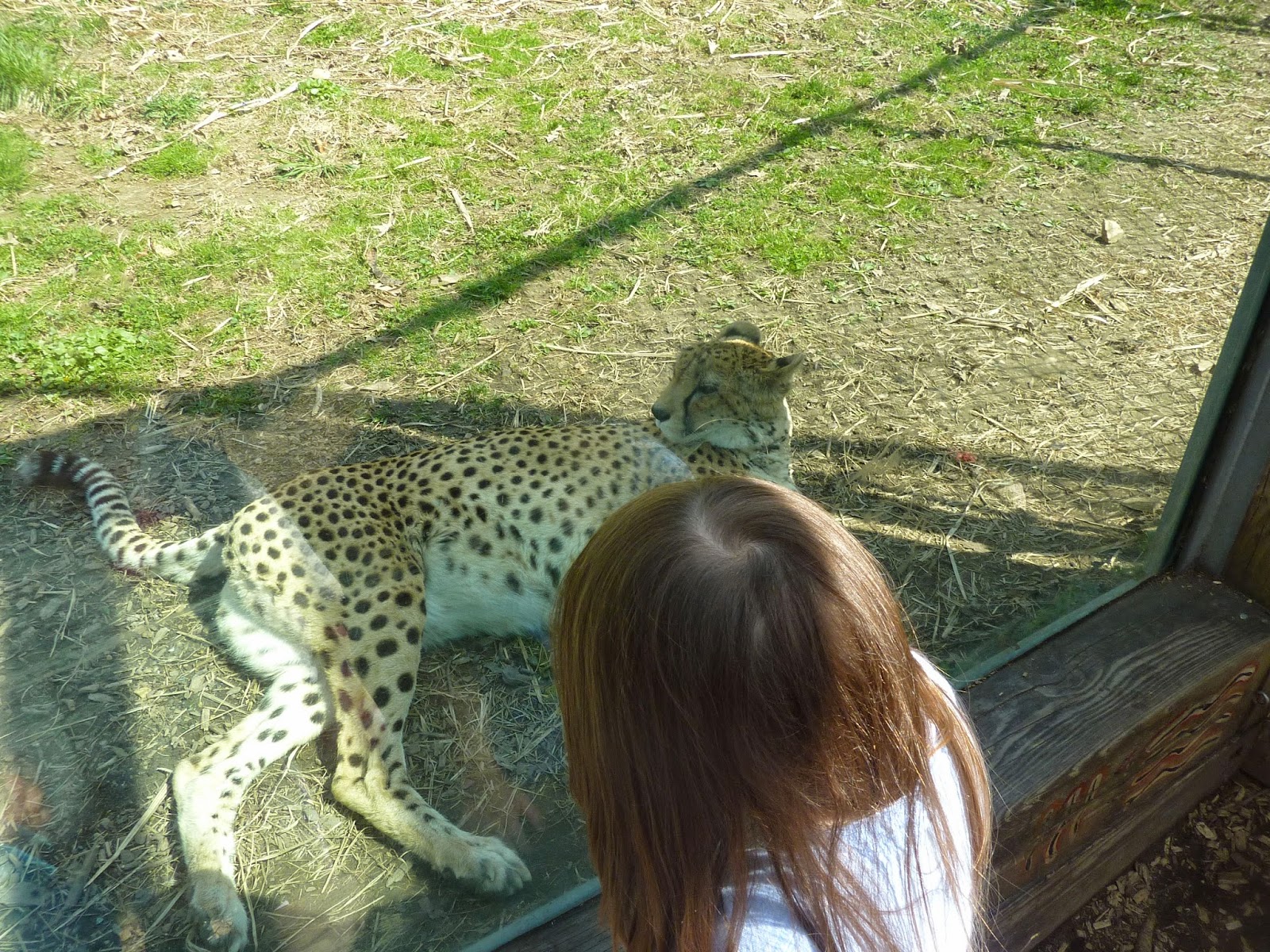 But that might have had something to do with the fact that Teresa kept calling her a tiger. 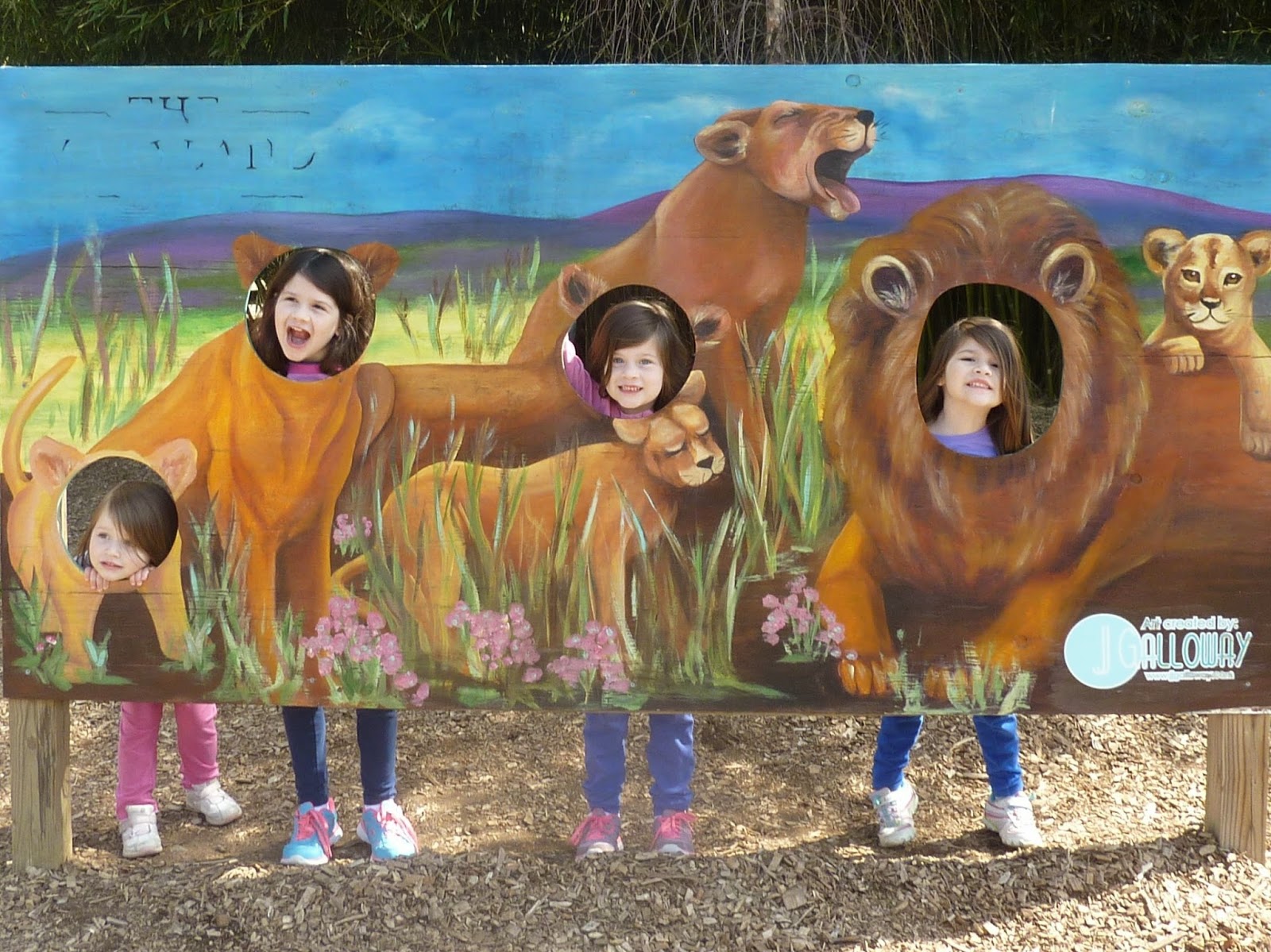 The girls spotted this photo spot and begged for a picture. 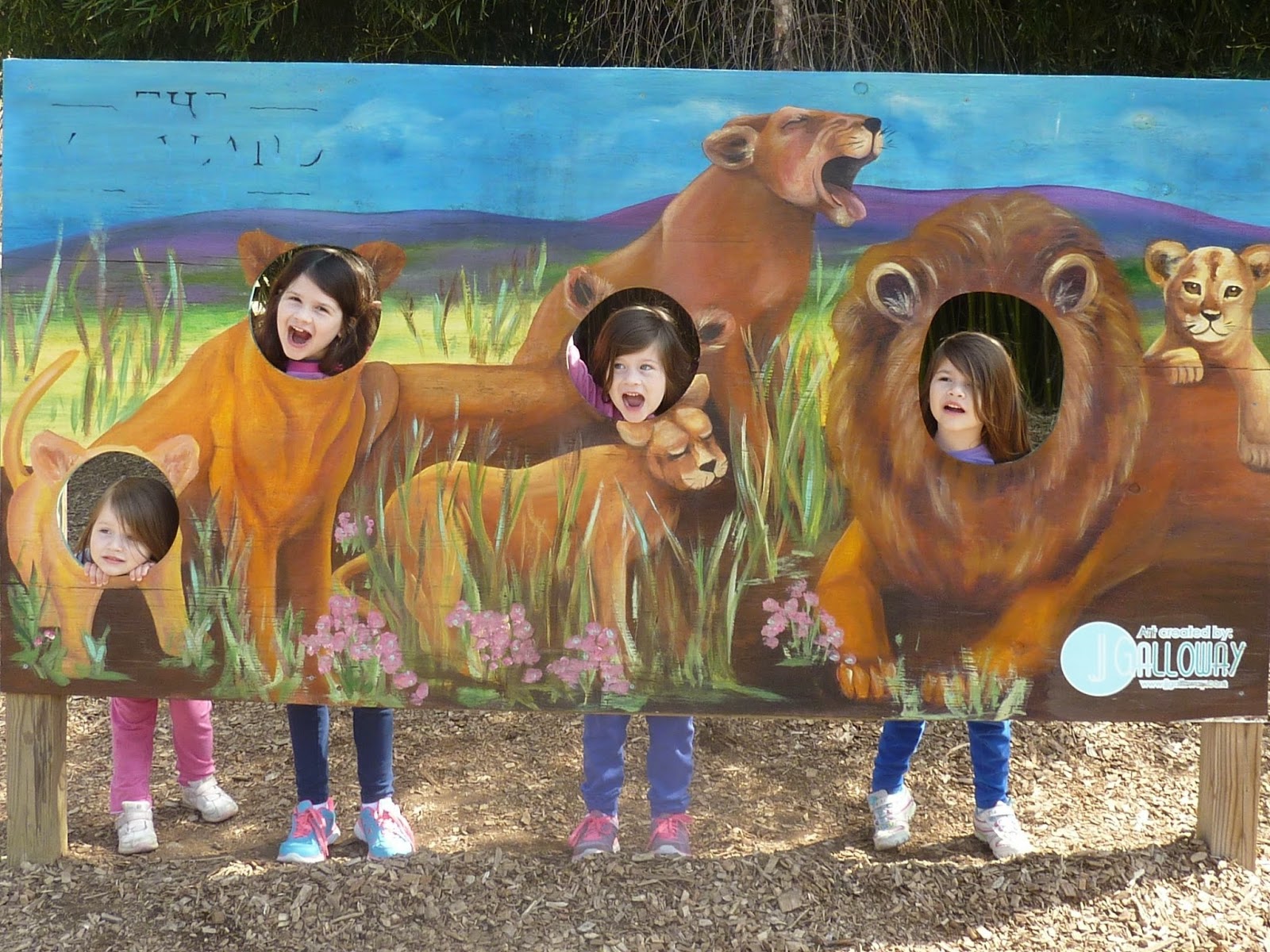 If only they'd had the cub's head cut out we could have gotten all five. :) 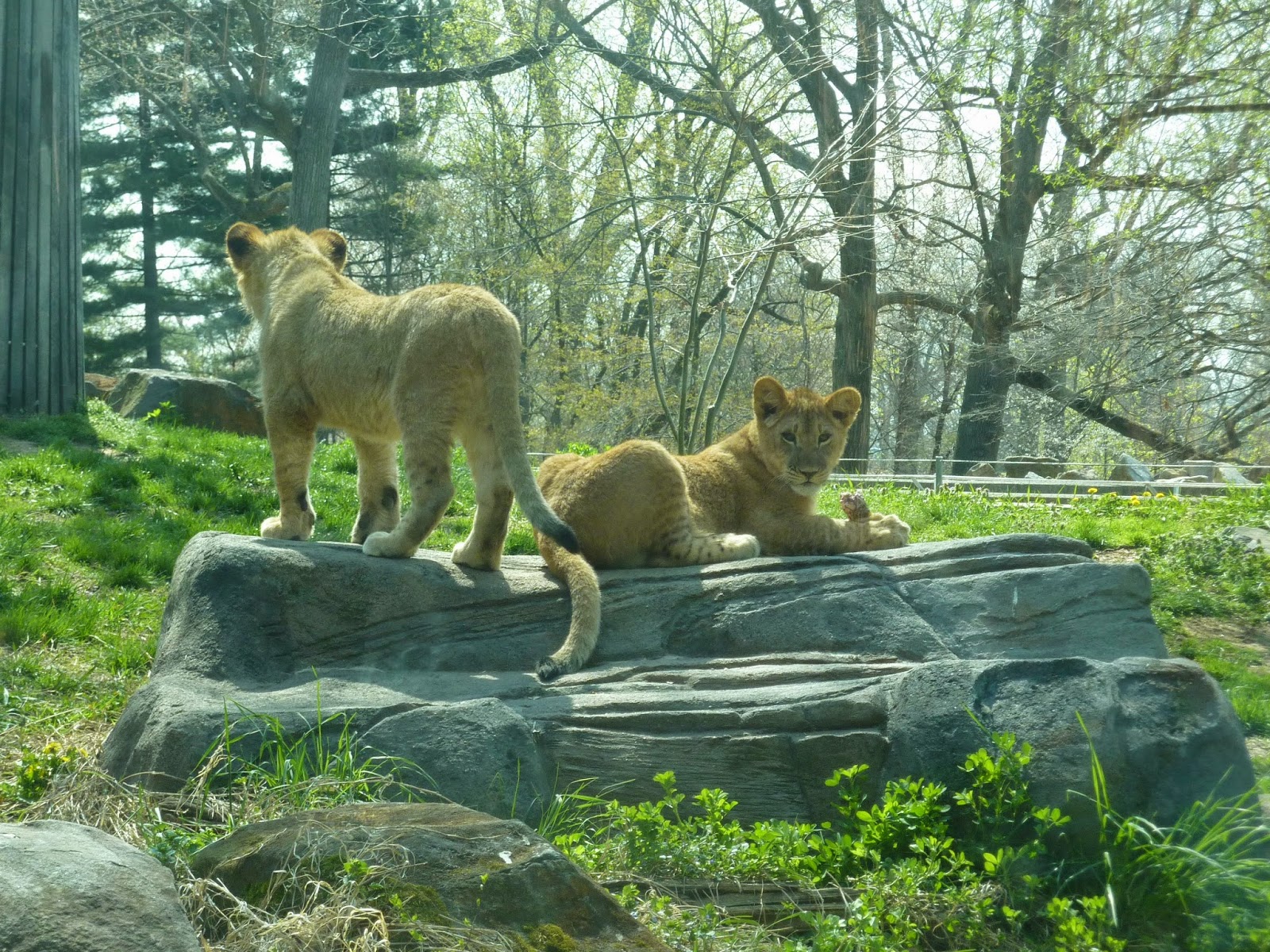 The pride of the zoo at present are three lion cubs, a few months old now. They were extremely playful and a lot of fun to watch. We didn't see their parents though... apparently they have to alternate between the parents and the cubs or they get into arguments and I don't think I'm the only one that doesn't want to see lions fight, particularly in front of my kids. 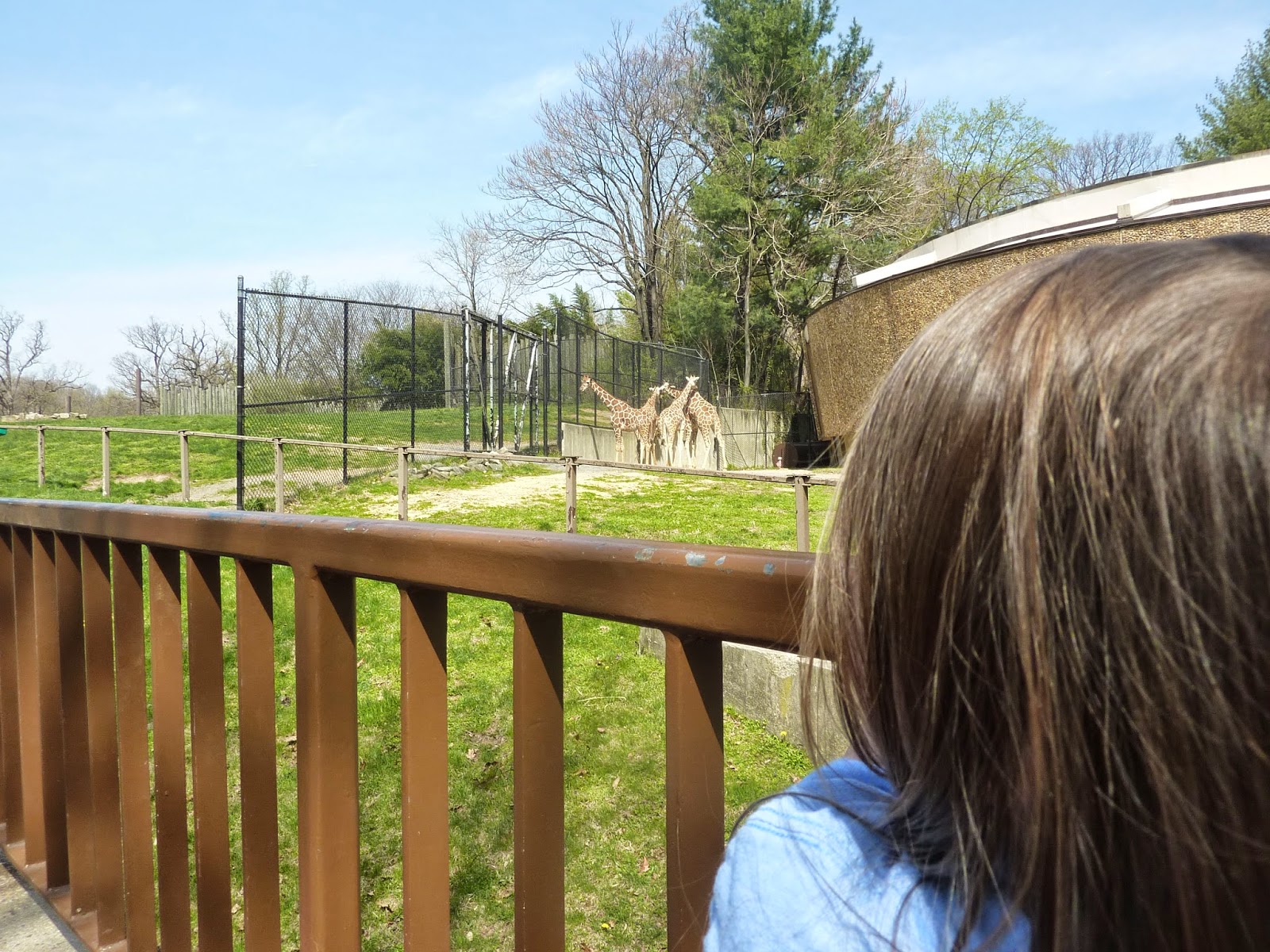 When Teresa first saw real giraffes her face lit up, her jaw dropped, she broke into a huge smile and began clapping. Oh she does love giraffes. At first she was upset I couldn't get much closer but eventually a couple came much closer and she got to see them close up. 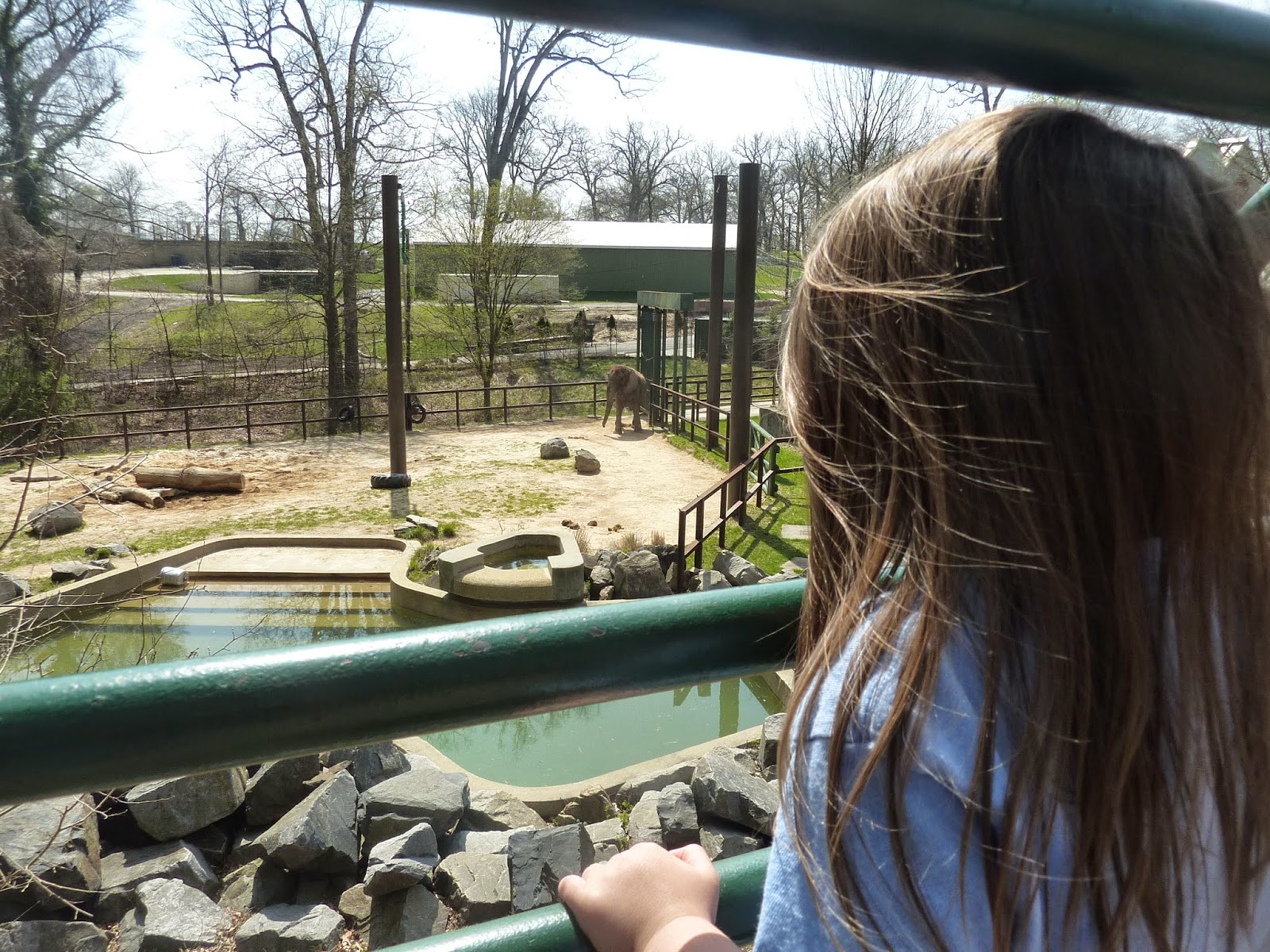 The elephants were all a bit far off but Teresa is not above amusing herself when the pachyderms fail. She collected small sticks and tried to throw them into their ponds. She came close to getting one in too; it bounced and landed on the wall. 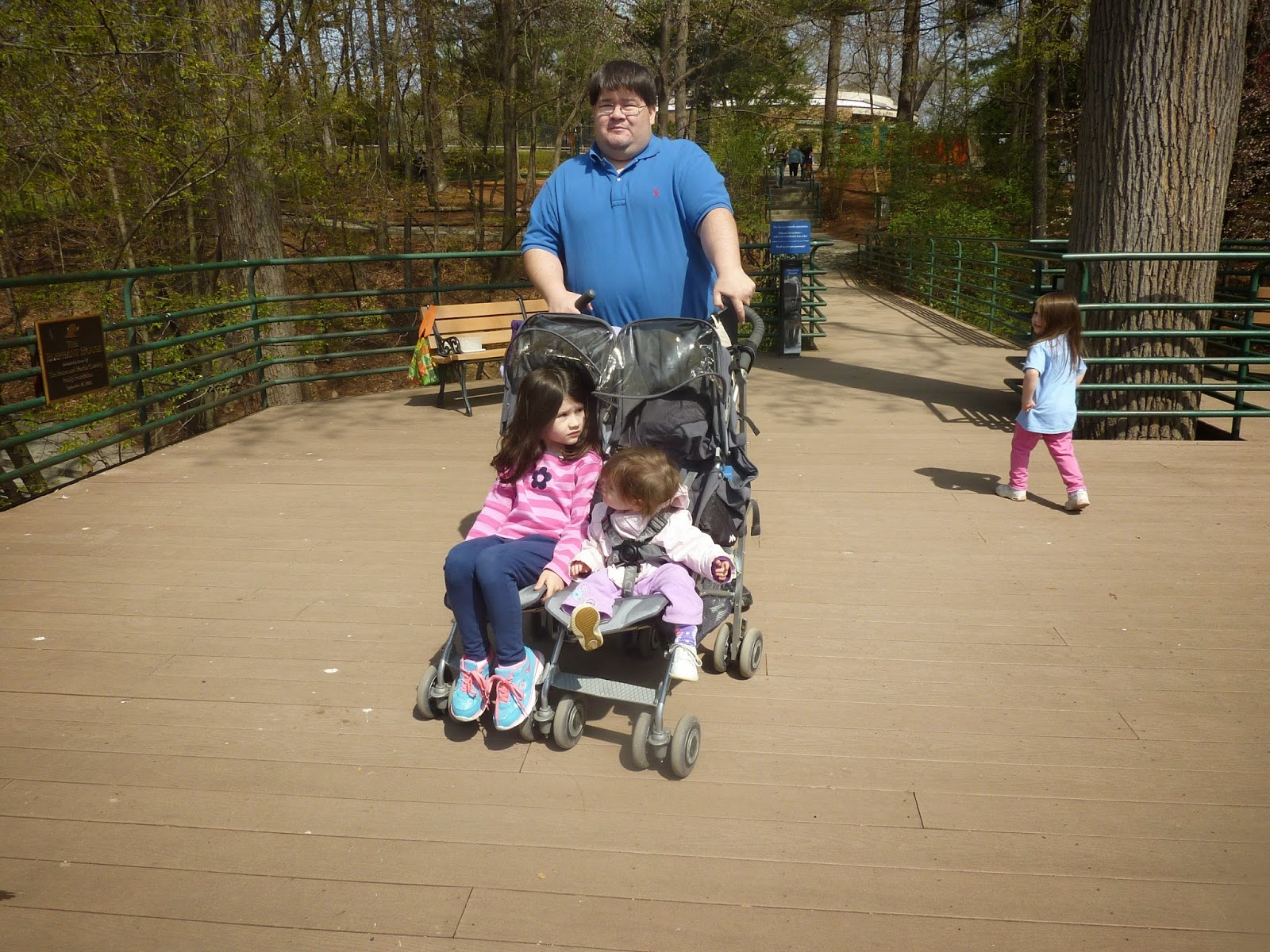 Brigid spent most of the time in her stroller but she got to see just about everything and did seem to enjoy her first trip to a zoo. 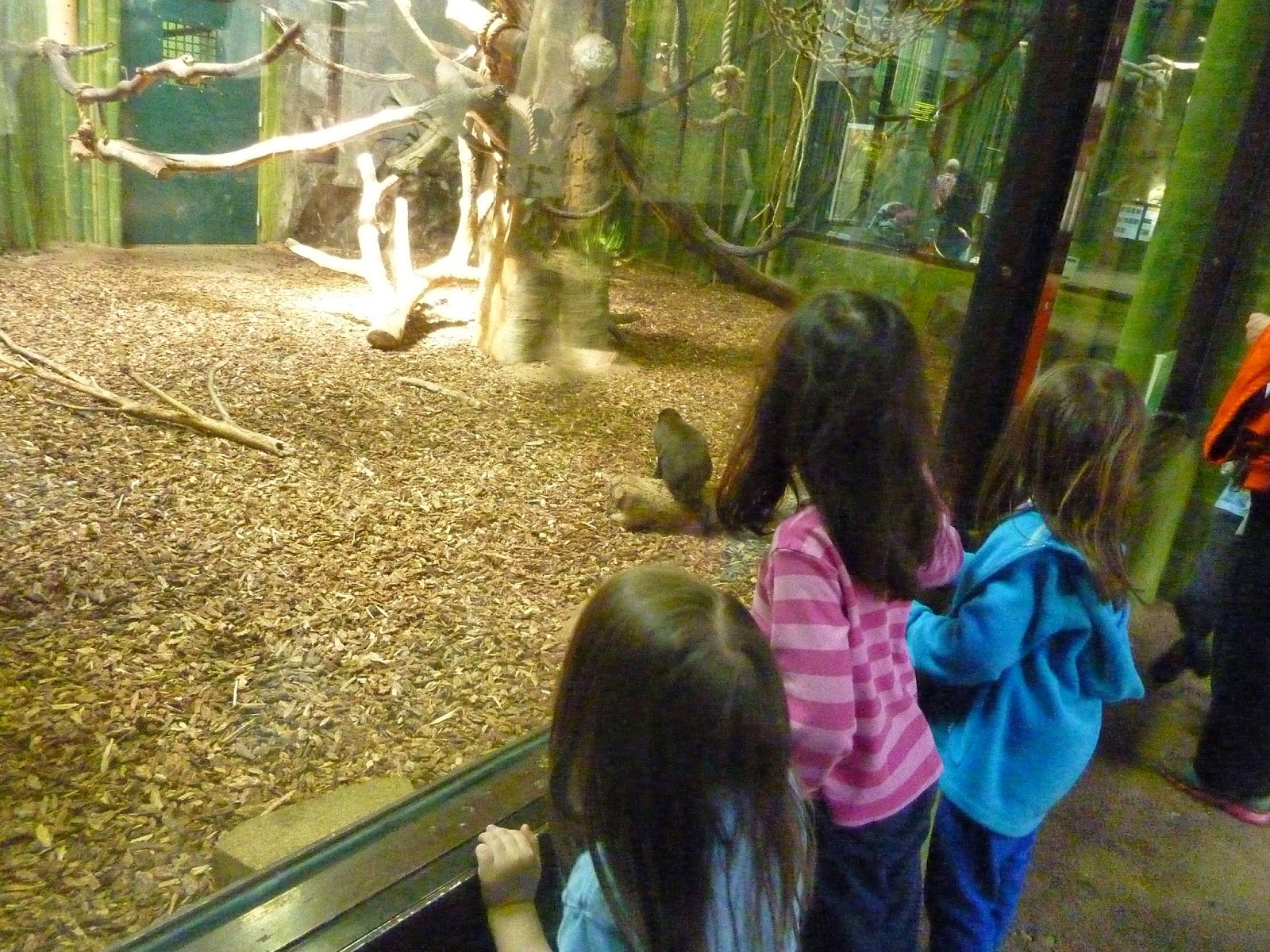 Teresa's other favorite animal is a monkey, very fitting in my opinion. She enjoyed seeing the monkeys, but they were very lazy and not very entertaining. 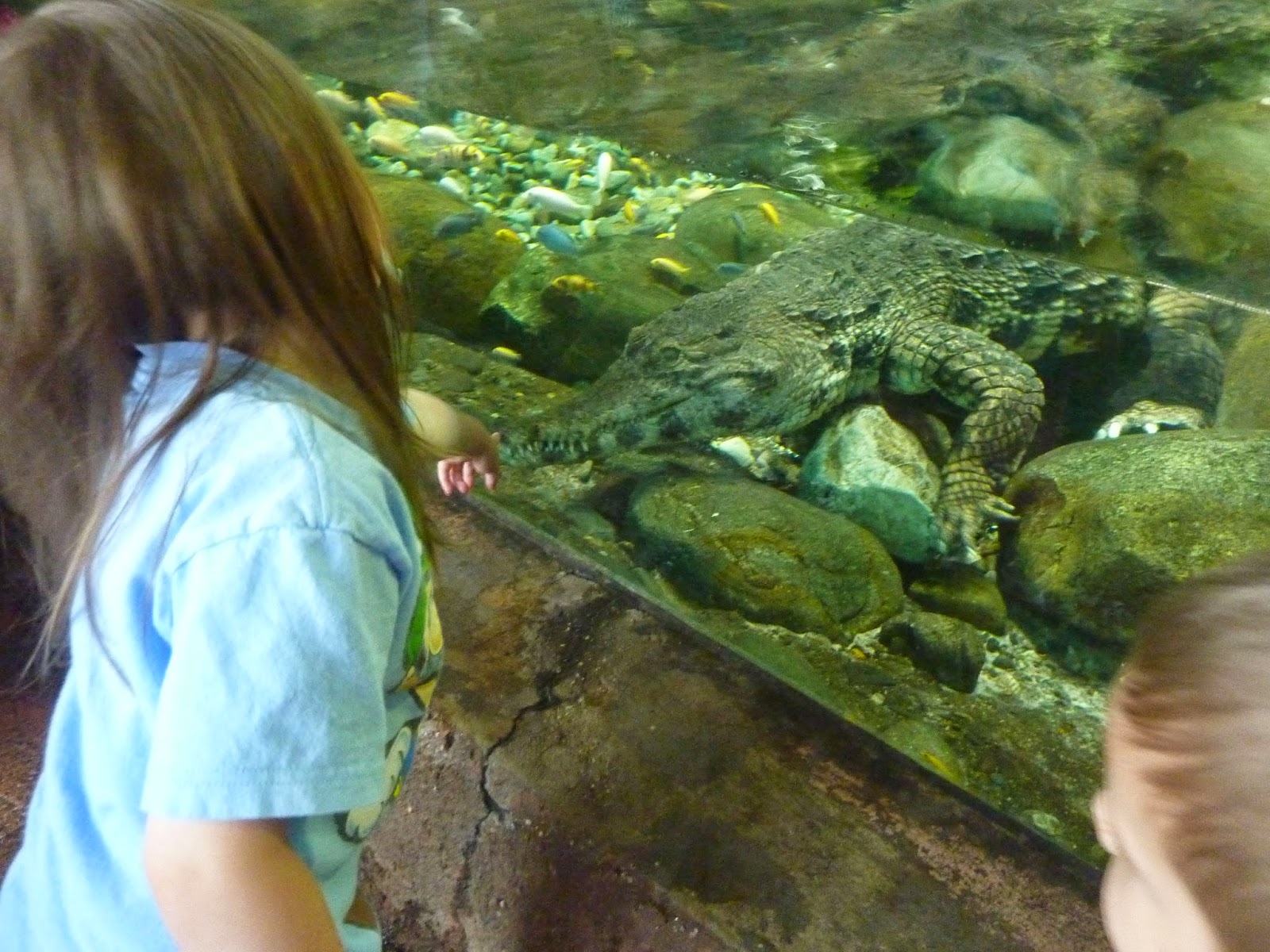 This guy, on the other hand, swam straight at her head and sat there for a few moments seeming to wonder just how he could try to eat her. Little did he know he had picked the one kid in the crowd who might be able to take him. She was so obsessed with watching the turtles she didn't even realize the croc was swimming right at her until he was just near her face. She loved those turtles and the fish, but the croc was quite the showoff. 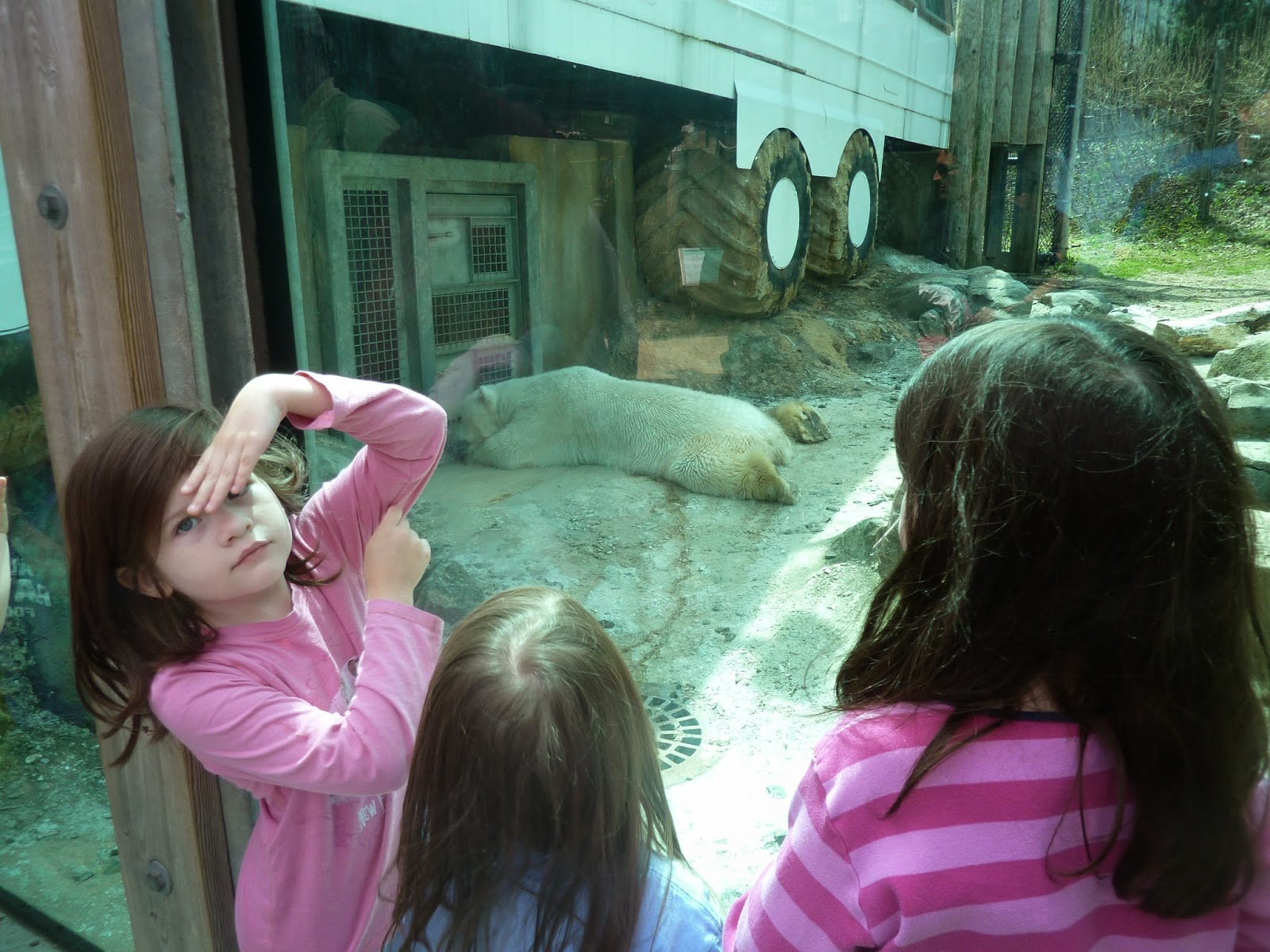 The only thing that could lure her away from the turtles was going to see the bears. Polar bears, to be specific. She really likes bears... not as much as giraffes and monkeys, but still, she does love bears and will usually be happy to demonstrate her roar. 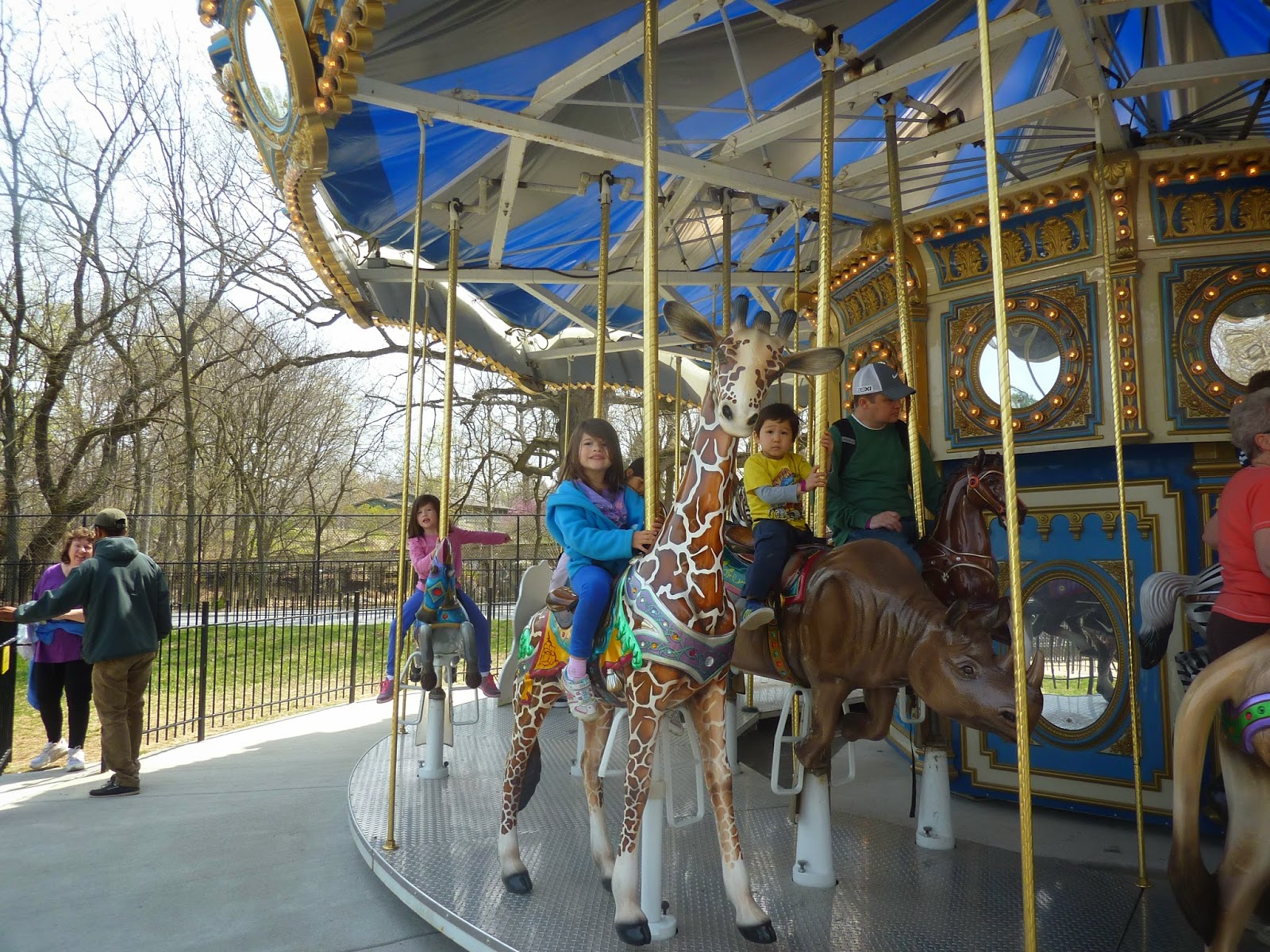 Afterwards we took a spin on the carousel. Elizabeth rode the giraffe, a favorite of hers, possibly because it didn't go up and down. 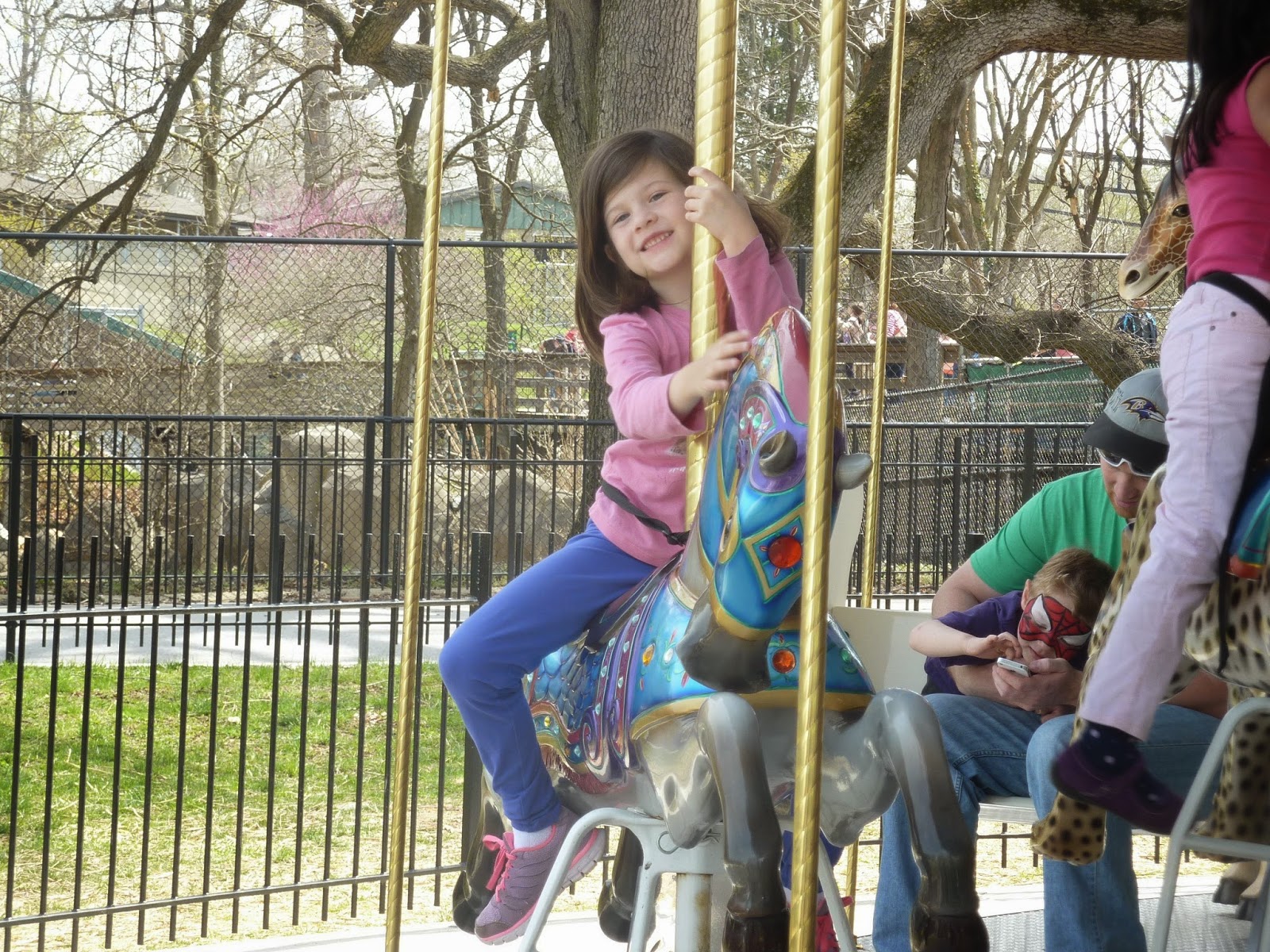 Felicity took a horse beautifully arrayed and rode him like a champ. 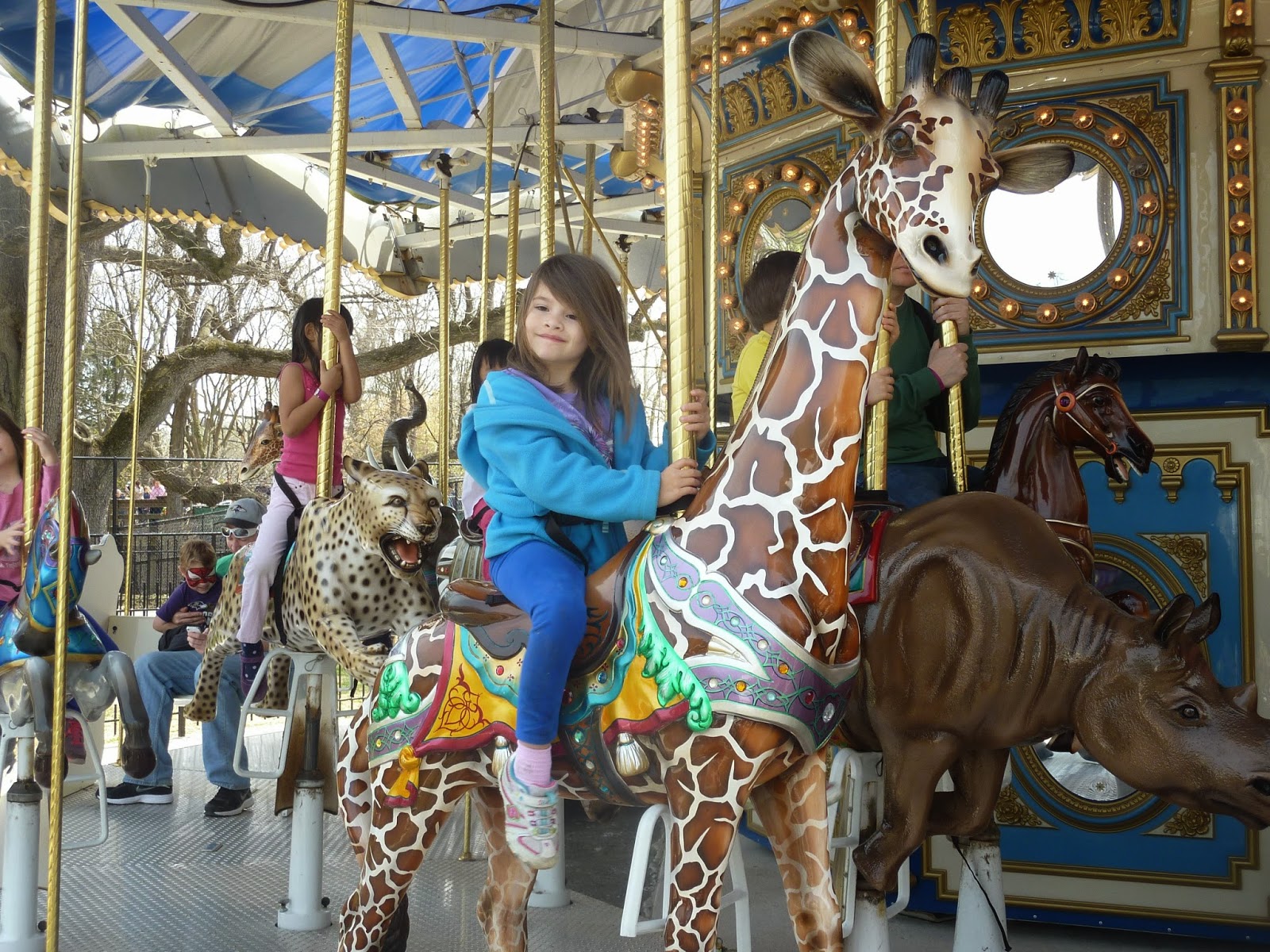 We did try and offer and try to get Teresa on but she adamantly refused, even to ride with me in the sled. She wasn't having any of it. Although she did like watching it. 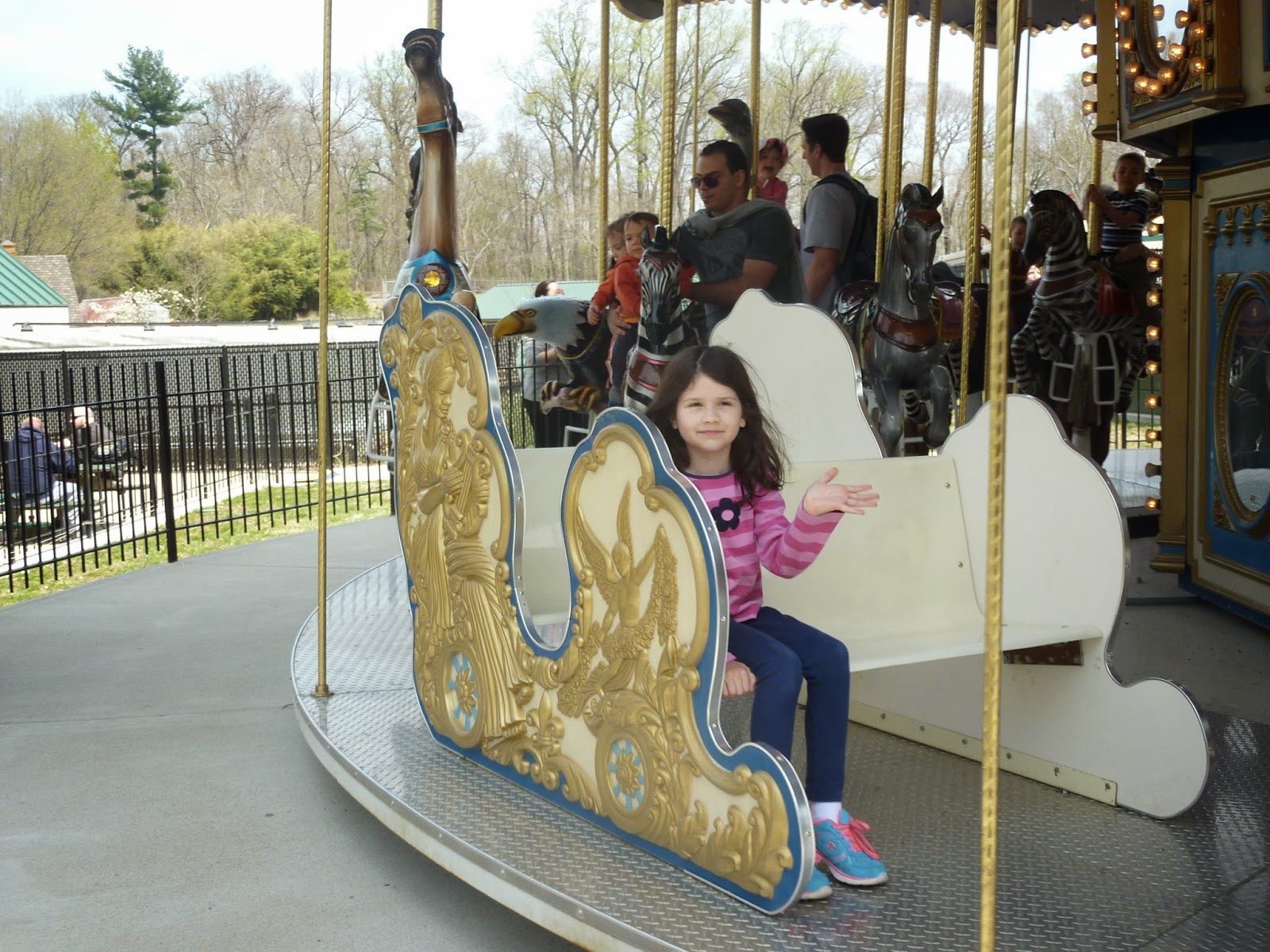 Cecilia took a turn in the sled though and got to enjoy the breeze. 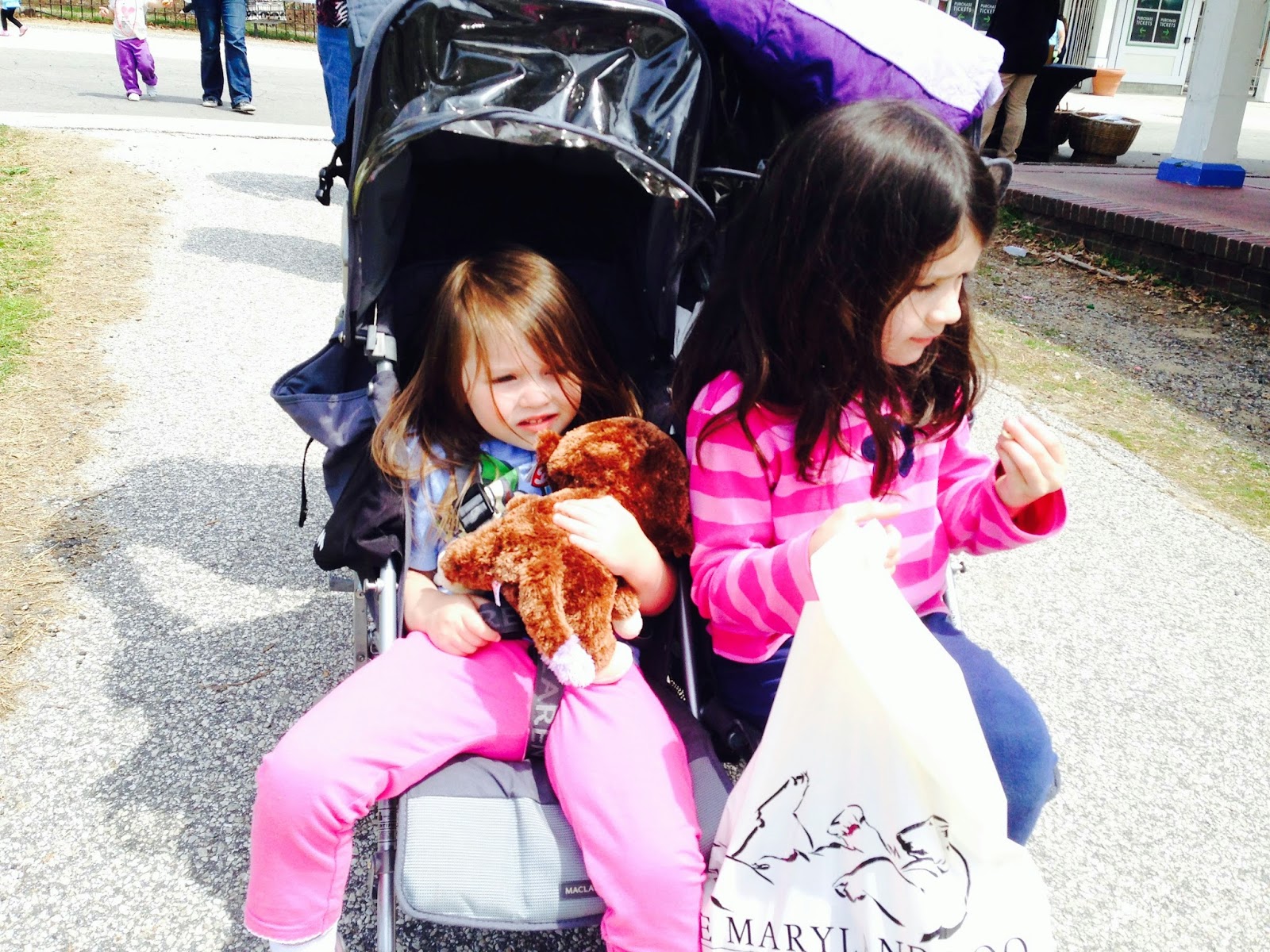 While we were only there a couple of hours and didn't do everything there, by the time we left the kids were pretty wiped. Each got one souvenir though. Teresa's pride and joy was a baby monkey stuffed animal. She has rarely been seen without it since.

Posted by Katherine at 7:54 PM