1.
I came across this on Facebook and sent it to my dad. 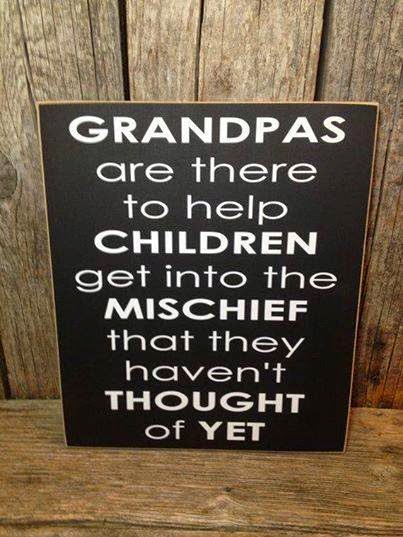 I turned around to discover someone had given the 1 year old a dum dum lollipop. 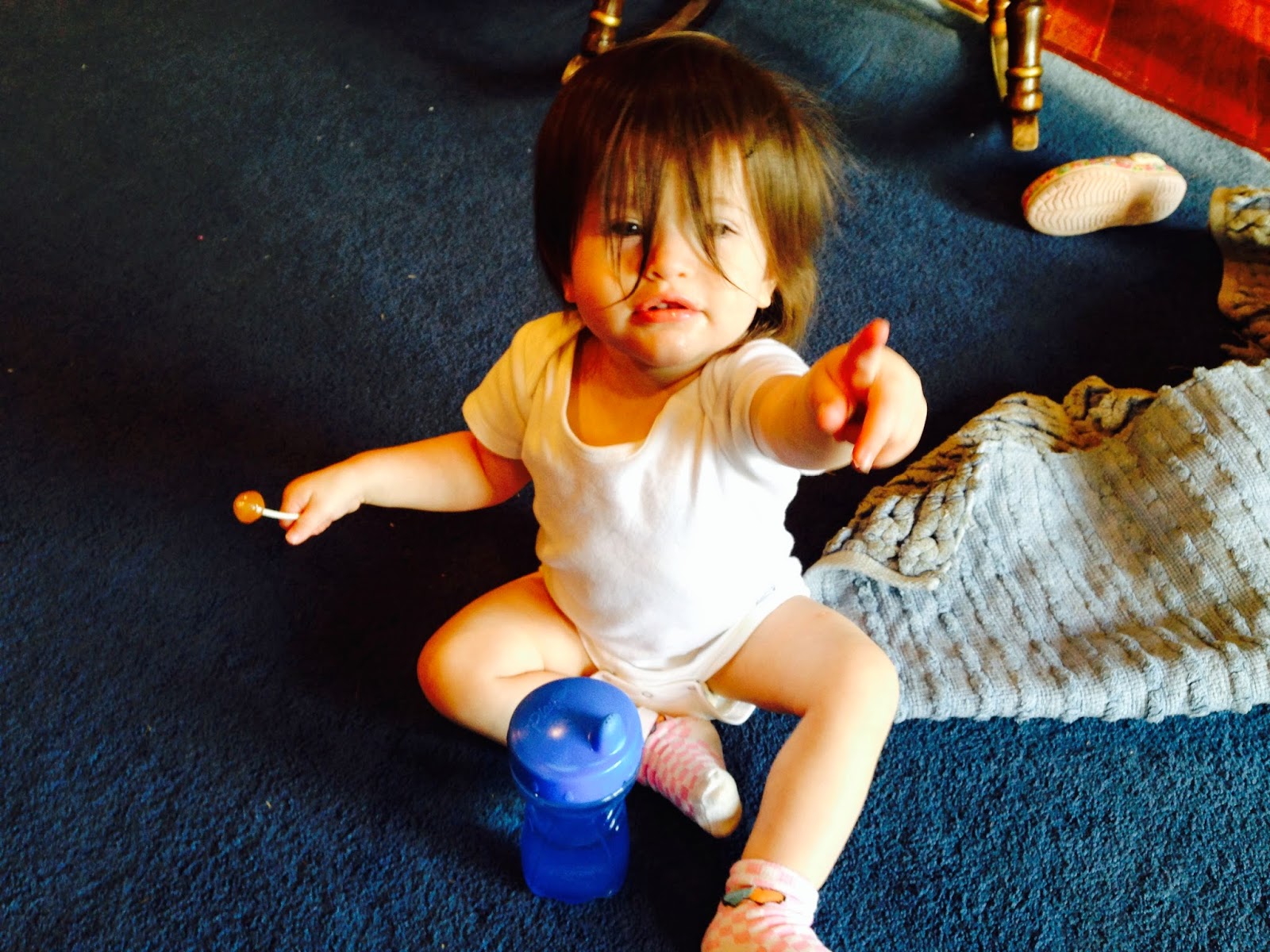 "Mom, what lollipop? Choking hazard? I don't know about any choking hazard. Look, mom, what's that?" 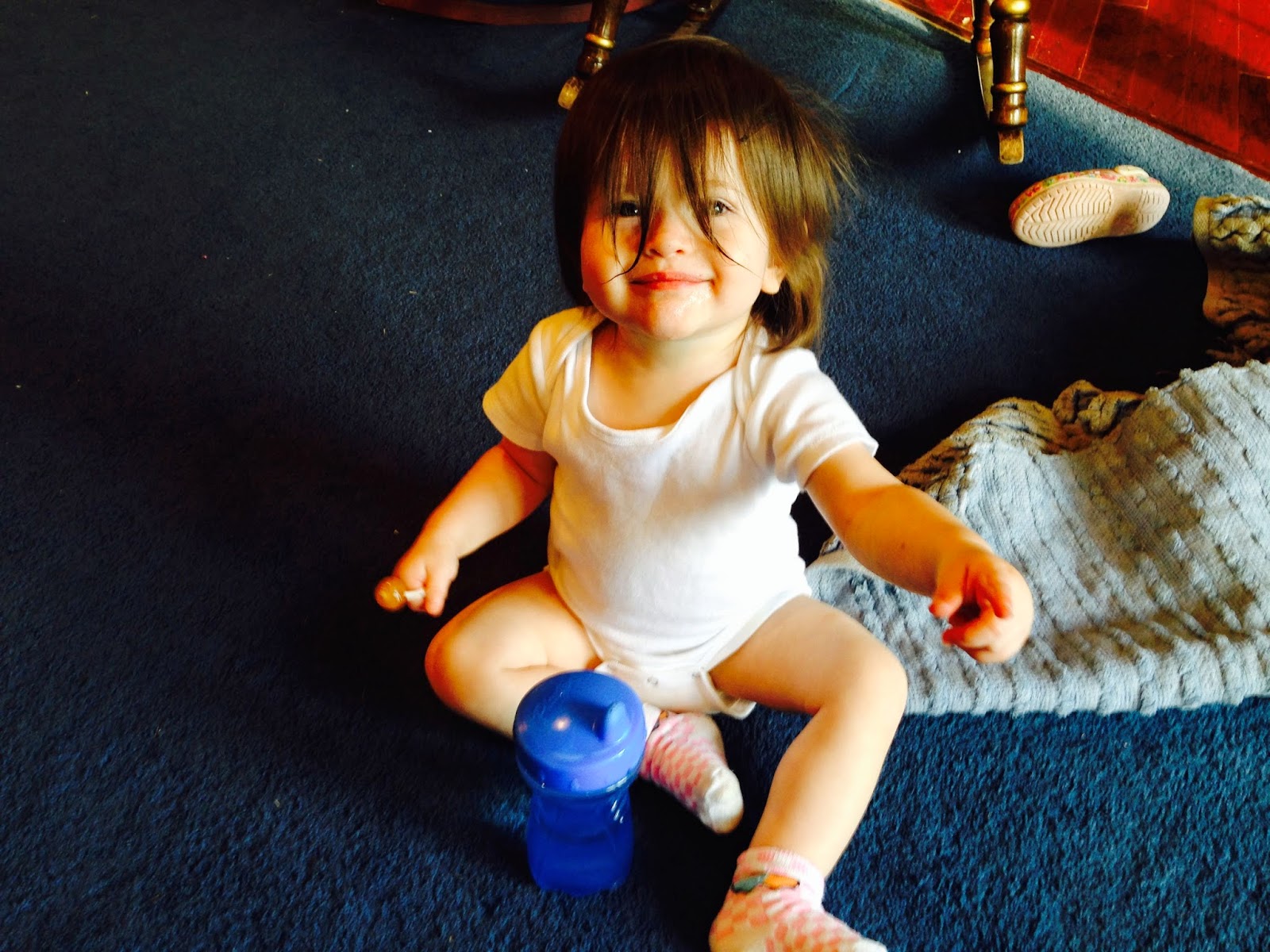 She was no dummy. She wasn't about to give it up for anything so I just watched her like a hawk until she put it down.

I came back to my desk to this: 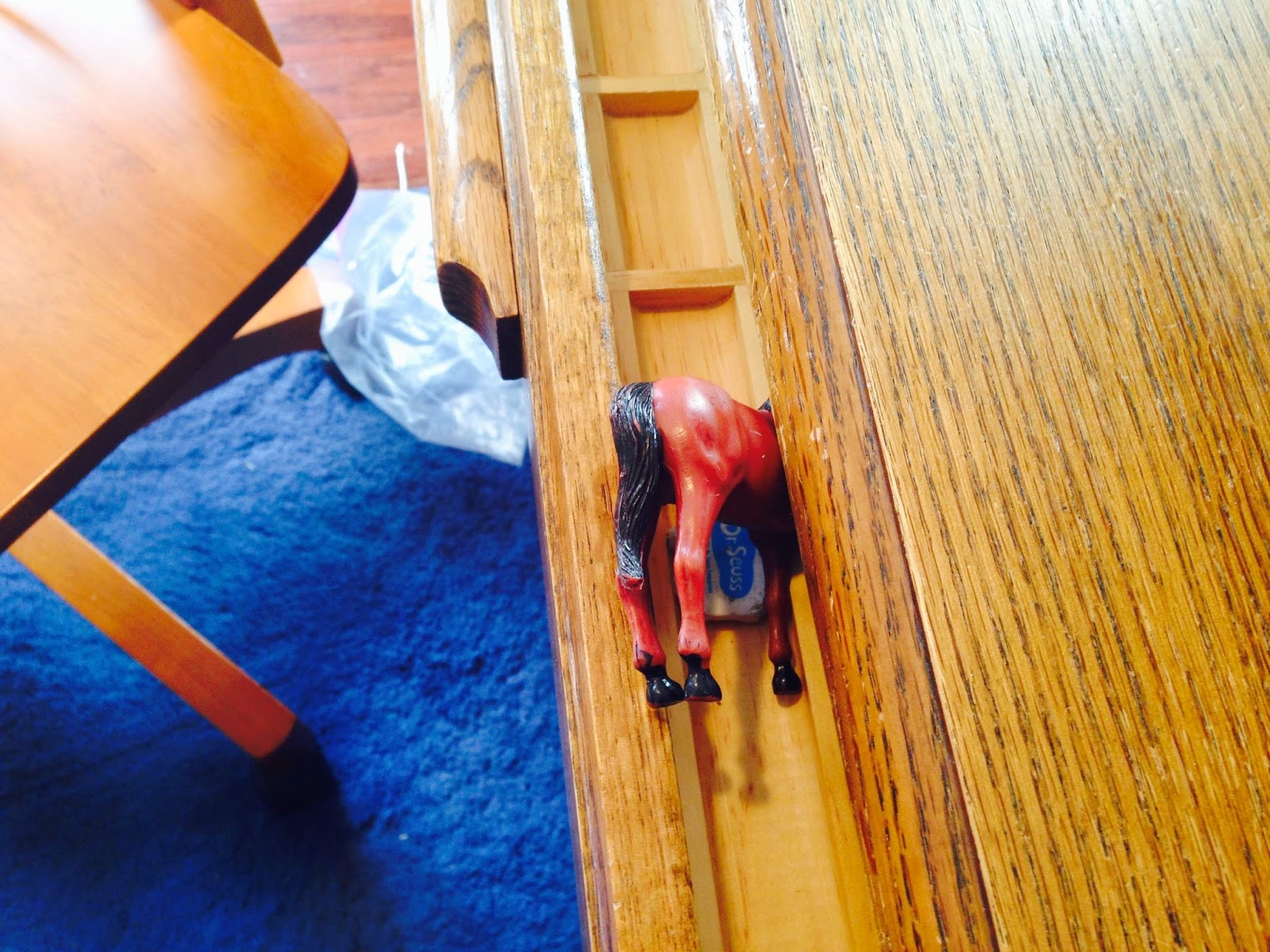 Just what was a child trying to tell me, hmm?

Last Monday Teresa fell off the playground. She was on the platform and, for reasons I don't know, decided to try to climb down the ladder on the left as though it was steps, in other words, facing away from the playground. 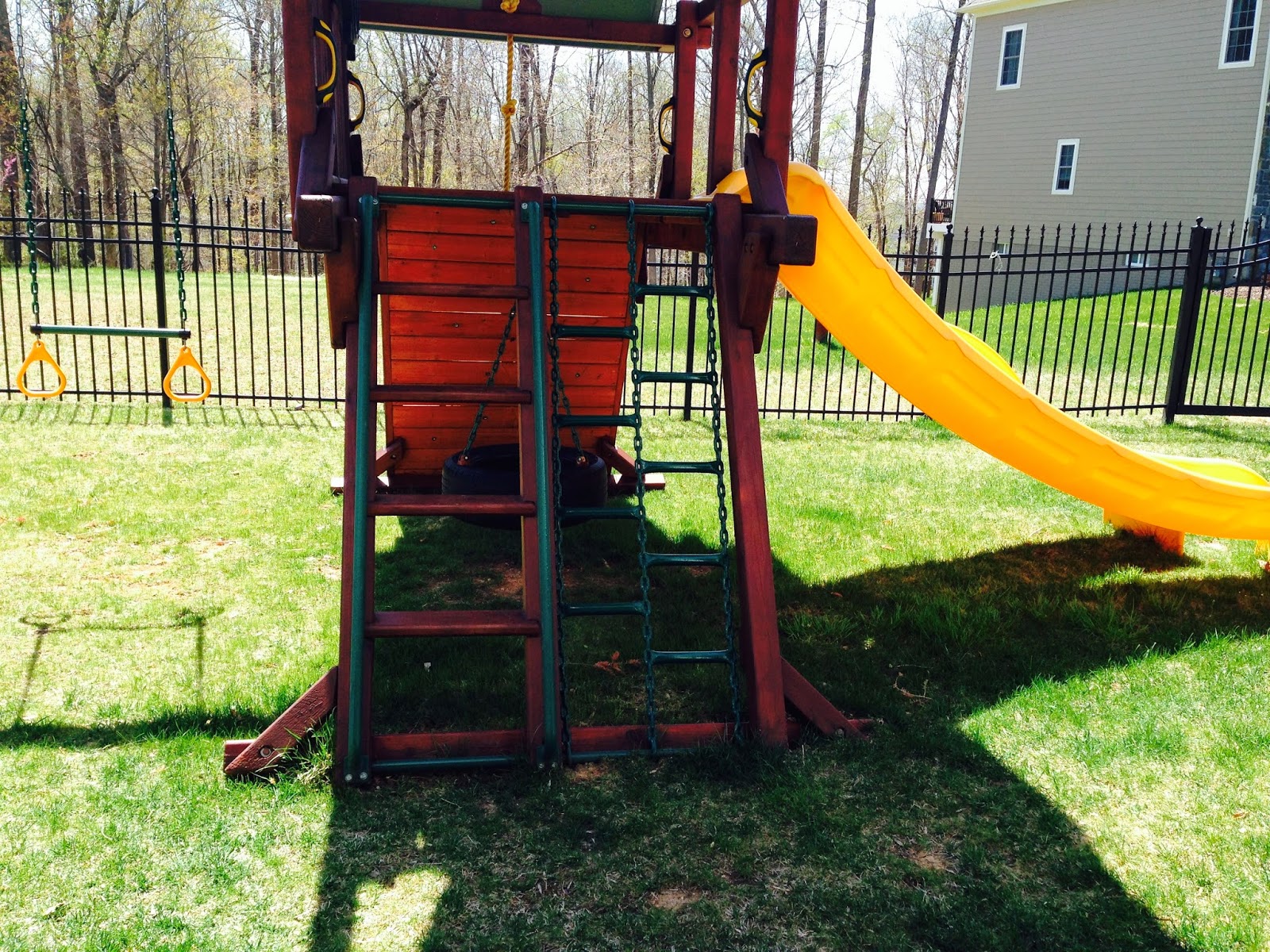 She lost her balance and fell. She landed on her face. 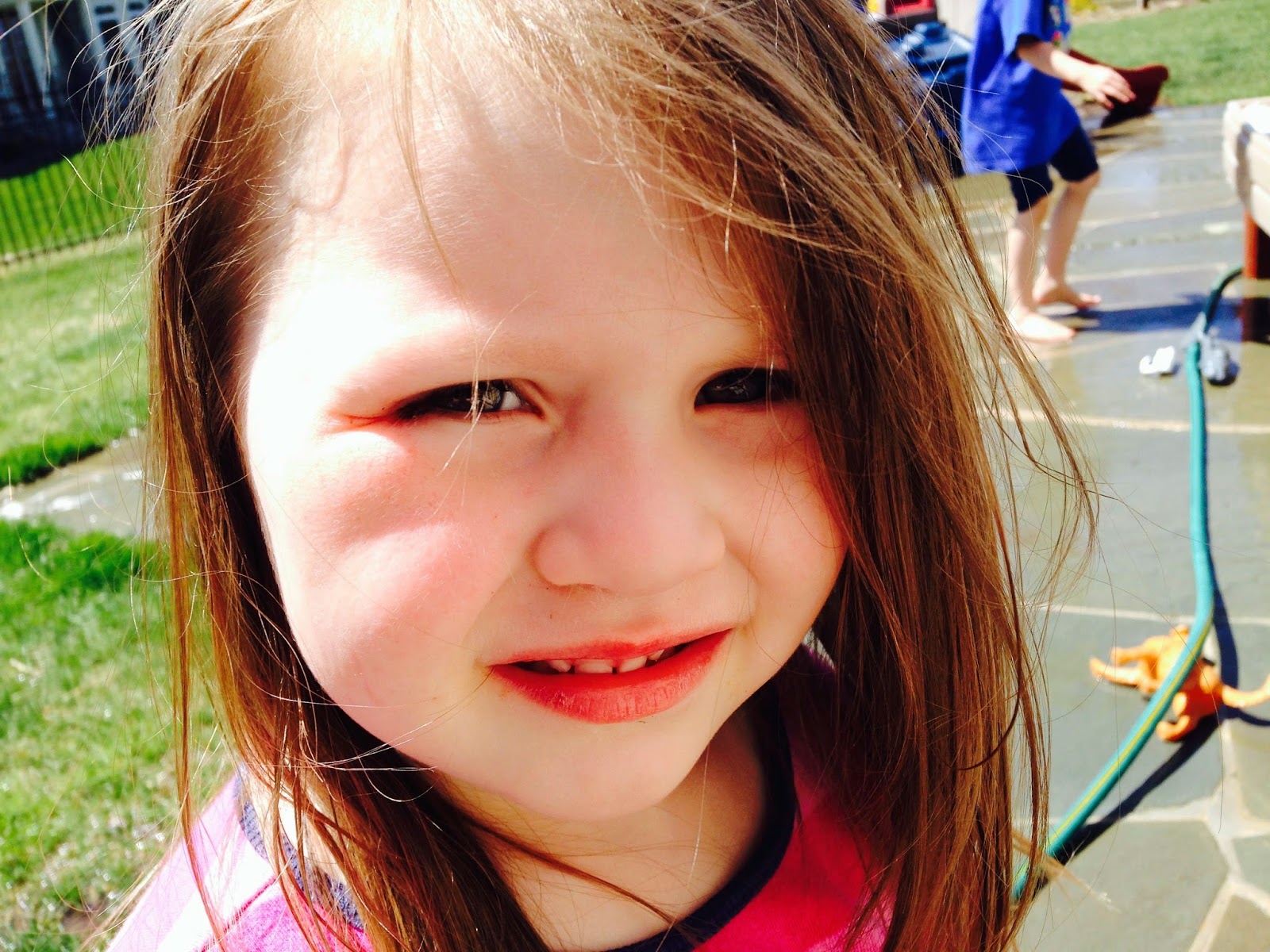 I couldn't get a good picture of how red her upper right cheek was but you can see how swollen it is around her right eye. She recovered fairly quickly but we did keep a close eye on her for a couple of days.

She also got explicit instruction on the better way to go down the ladder. Fortunately she is her usual bouncy self again. (Or unfortunately depending on when you ask me, see #8)

I've not yet had to ever visit the ER for one of my kids, but I'm willing to bet, if I ever do, it will be because of Teresa.

Brigid has been surprising me this lately.

Like most of my kids, she is a toddler of few words. All my kids have only said a few words by 18 months and have language explosions around 2 years and 2 1/2 years. She currently says mama, dada, yeah, no (and it is the most adorable no I've ever seen/heard... she puckers her lips in a perfect O to say it and it is simply priceless), fry, done and down and maybe a couple others I can't think of at the moment. 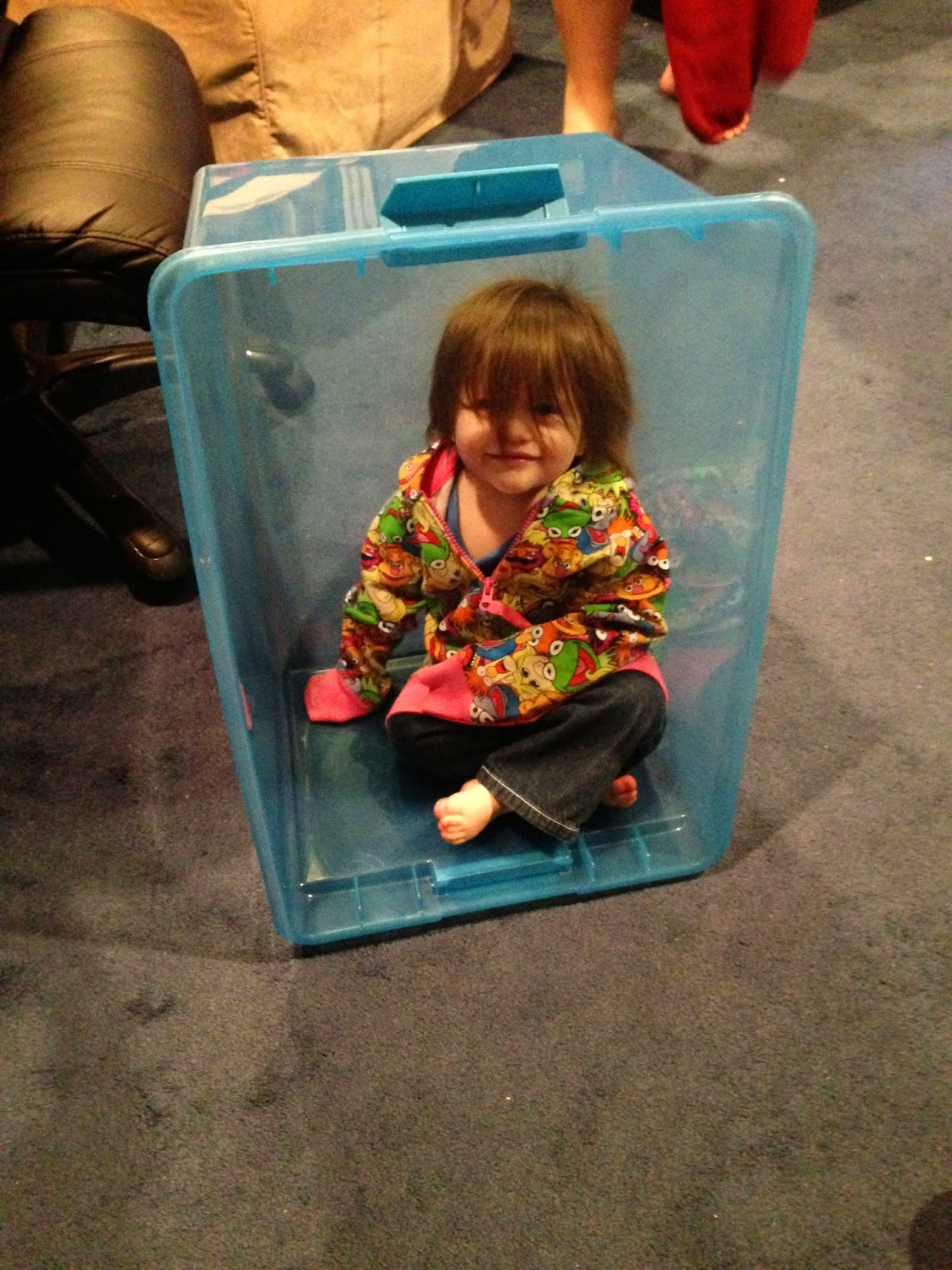 But on last Monday Elizabeth had been playing with a solar powered yellow chick and misplaced it. She asked me where "the little duck thing" was. I scanned around but didn't see it and told her I didn't know but it was around here somewhere. Brigid, who had been sitting in my lap, got up, walked about 8 feet and pointed at the yellow chick on the ground. I was shocked. How she knew that "little duck thing" meant the solar powered chick still baffles me. She definitely understands more than she says.

So, of course, I ask Cecilia and Felicity to hang up their AHG uniforms and naturally they leave them on the floor of the playroom. So it is not too surprising I turn around to find Teresa asking me for help with the neckerchief. 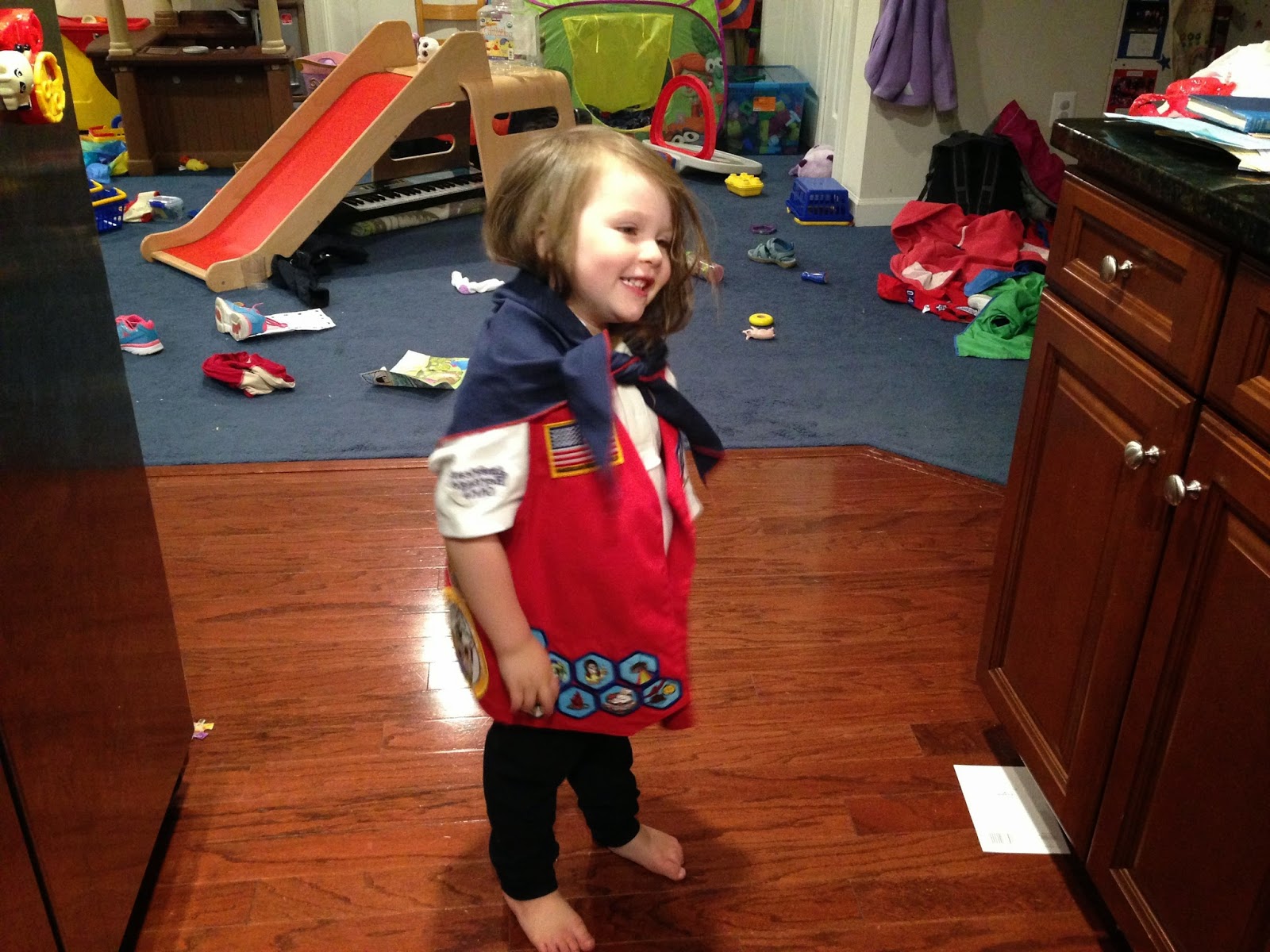 She seems eager to join her sisters an an AHG girl. Elizabeth has been counting down for 2 years and is psyched to become a Pathfinder this summer. I guess it is Teresa's turn to count down.

Teresa was in fine form this week. Losing sleep and having a cold must have put her over the top. That and being three.

While we were doing school, she thought it would be a blast to play in the garbage. She pulled pee-soaked puppy pads out onto the floor and dumped pencil shavings and graphite dust all over the place. 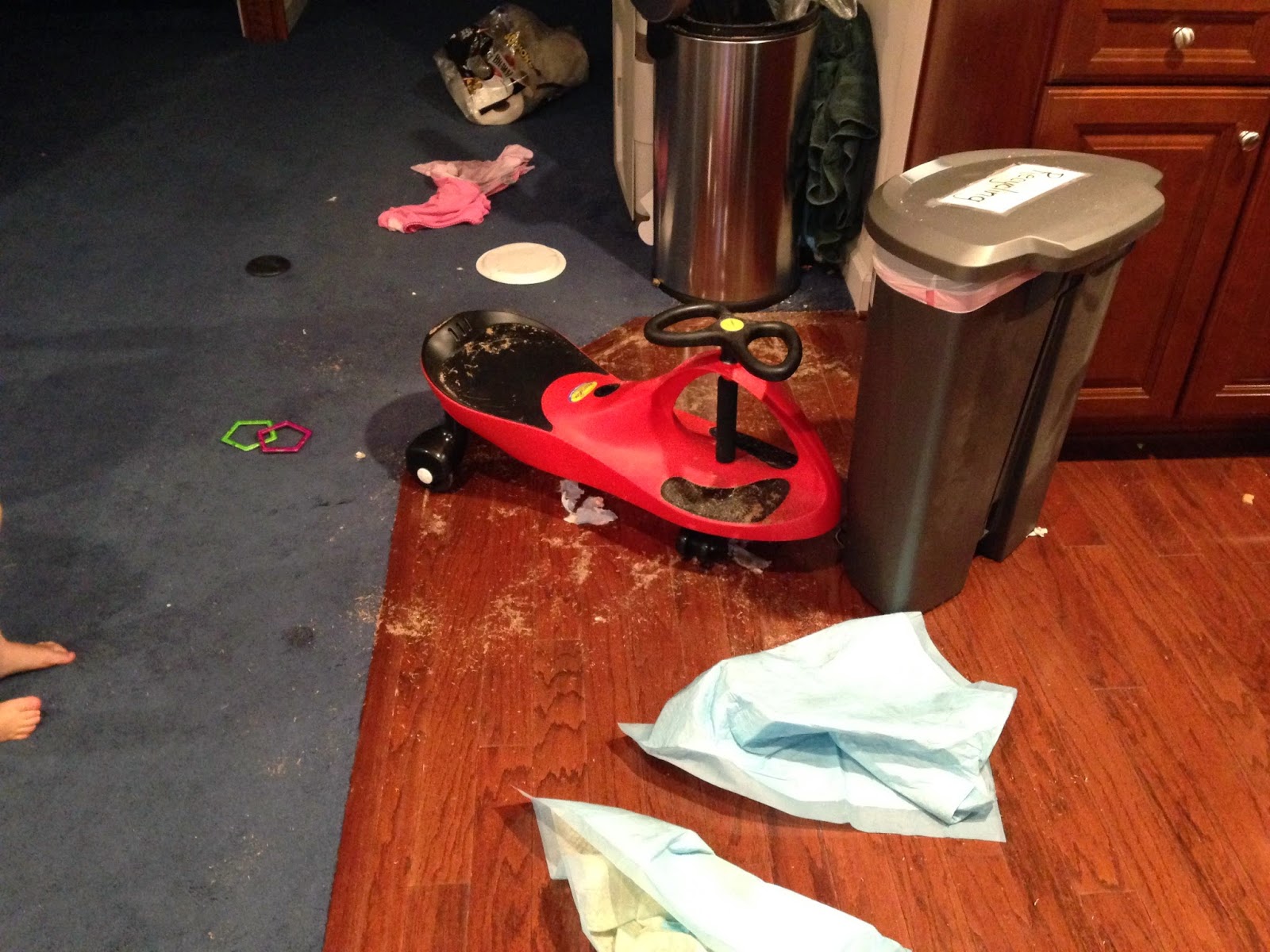 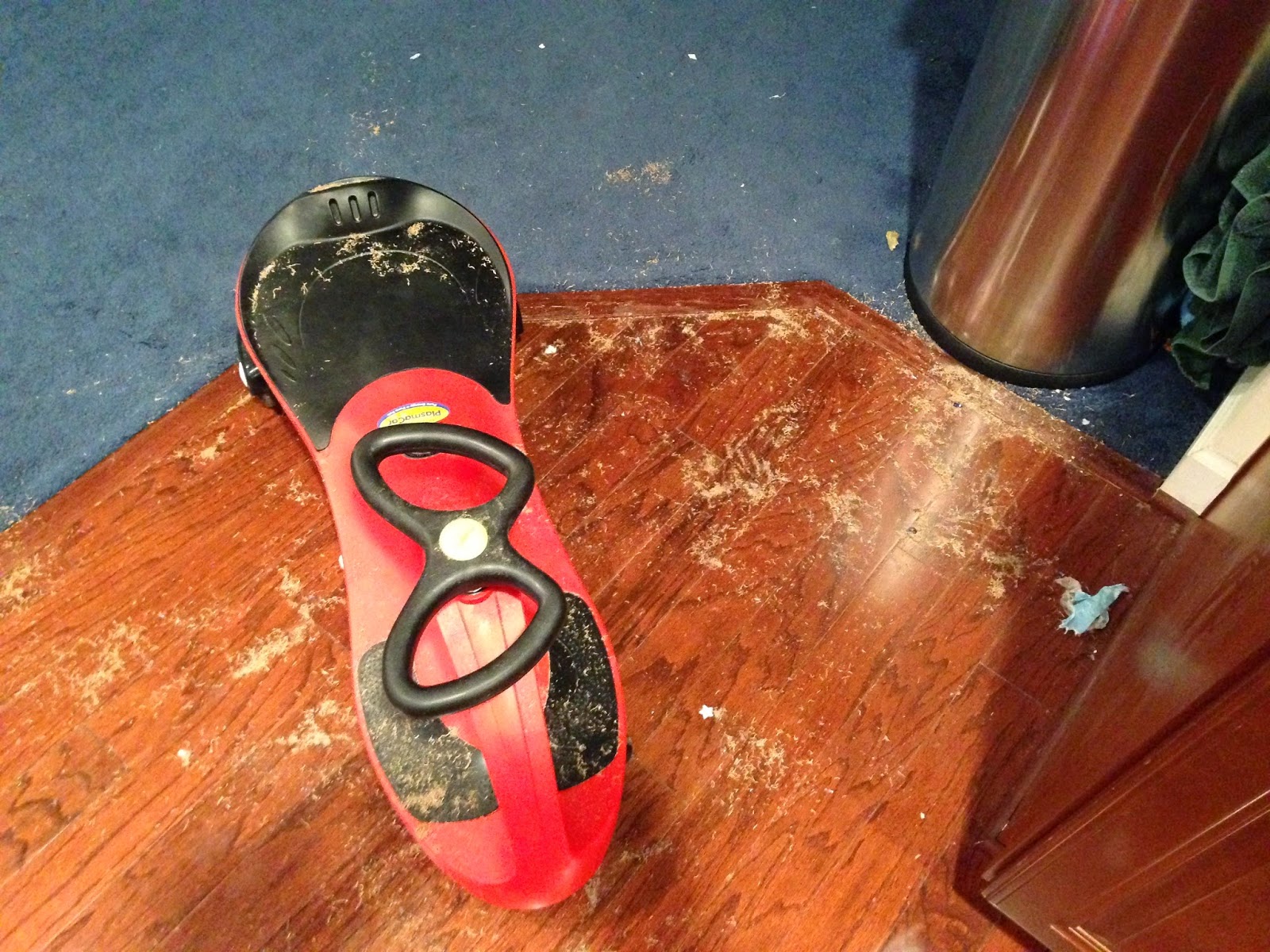 Some days I'm amazed that girl doesn't send me to the looney bin.

On April 7th, I preordered Jennifer Fulwiler's Something Other Than God.
Usually, with Amazon, when you pre-order something, they ship it early so that you get it the day it comes out. Apparently I am special though. Or, I prefer to think her book is just so hot Amazon didn't have enough. They only shipped mine yesterday, so hopefully I'll have it by tomorrow. (And, to be honest, it will be a welcome break from Catherine's Dialogue, which I've made some nice progress in but can be pretty thick so I'm needing to take breaks while reading it.) 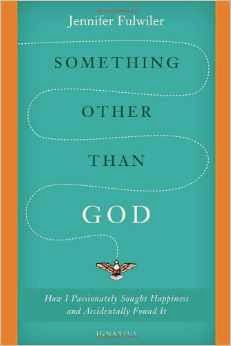 I do however hate other people telling me about a book I already fully intend to read. So I have intentionally avoided all reviews, posts, comments, etc. about it. I watched Jen's video but even then tried to ignore what people were reading and just enjoyed seeing video of people I have only known through a screen. If you haven't ordered your copy yet though, I fully expect it to be worth it. I've never yet seen something written by Jen that wasn't worth reading.