Well, I think I've finished my preliminary planning for the next school year. I began around the beginning of March, so it took me about two months, but I've at least finished a preliminary plan and I've gotten all the school books for next year.

Elizabeth is on track to finish all my Kindergarten work for her by the end of our school year, so, even though she only turns 5 in June, I have planned next year as though she will be in 1st grade though if she doesn't progress according to the chart I'm not going to sweat it. She is reading really well and will already be ahead of most public school standards.

MATH
I am switching Cecilia from A Beka to Saxon this year for Math. I debated a lot about which text would be best and emailed and asked friends about the two but I went with Saxon because not only are the colors and pictures that lured Cecilia before in A Beka no longer there anyway, but I think Saxon will do a better job helping Cecilia to work on her own. She might not like how many pages she will need to do each week, but 4th grade isn't Kindergarten and a fair amount of the increase is instruction (more reading than actual working). Felicity and Elizabeth will have A Beka math books.

PHONICS/VOCABULARY
Felicity will finish Phonics as Elizabeth begins it. Since Phonics doesn't continue in the A Beka series after 2nd grade, I find 3rd grade a perfect time to jump to Vocabulary. Cecilia really enjoyed the Wordly Wise A, B and C books last year but since they would change for 4th grade I switched her to Seton's Vocabulary book, which, ironically, seems more structured like the Wordly Wise books she enjoyed.

POETRY/HANDWRITING/TYPING
I picked age-appropriate poems for each girl and generally plan one stanza per week (or 4-6 lines depending on if the stanzas are particularly long). This year I am switching their handwriting texts from Seton to Memoria Press. I don't know if it will make a difference (Felicity really needs practice!) but I do think they will enjoy it more, as handwriting this year with Cecilia was not pleasant. (Once she found out that she wouldn't have to do handwriting anymore once her handwriting was nice, she has been working hard to improve it though.) Cecilia is the only one who will be doing typing (I start that in 3rd grade... 2nd has enough to keep them busy) and that will be a combination of practicing on the Typing Instructor program we have for kids, typing up her poems once she knows them, and writing book reviews of the books she finishes.

ENGLISH/SPELLING
I will still be using Seton's English and Spelling books this year. Generally I think they work well and all the girls will continue to build their understanding of English sentence structure, grammar and writing as well as practicing spelling.

LATIN
Cecilia will continue Latina Christiana and Felicity and Elizabeth will work on Prima Latina. One thing I have learned with their Latin is to slow down. Just because you can do a lesson in one or two weeks doesn't mean you need to and the more time you take to go over it the more practice they get. So I'm generally planning 3 weeks per lesson this year.

RELIGION
My basis will be the Faith and Life series for Grade 4 but I'm going to be pulling a lot of Scripture passages form my Ignatius bible. In fact the first 15 weeks will just be going through the Old Testament up through John the Baptist (perfect timing for Christmas, no?). After Christmas we will focus on Jesus - his life and teachings, the Sacraments, the Commandments, the Mass and the early Church, which will include passages from the CCC. Felicity will also focus especially on preparation for her First Confession and First Holy Communion, for which I will also employ the Baltimore Catechism Communion book. We also have a homemade Liturgical Yearbook, so we celebrate and learn about the Saints throughout the year.

HISTORY/GEOGRAPHY
This year we are up to The Story of the World volume 4. However, there is SO much to go over I went through and selected 20 of the 42 chapters to study (some are half chapters, but they add up to 20 chapters) in units and mini units. We will supplement with library books and possibly videos. I'm also hoping to include a few field trips, though it will depend. A lot of what we will be covering can be very violent and sensitive subjects. We will cover the Civil War and slavery and reconstruction, the rise of railroads, the Irish Potato Famine, the Spanish-American War, the American West, Business Tycoons, WWI, the Russian Revolution, Ireland's and India's freedom from Britain, Stalin, The Great Depression, Hitler and WWII and the Holocaust and rebuilding Europe, Ho Chi Minh and the Korean War, the Cold War, the JFK Assassination and the Civil Rights movement, the Vietnam War, the 6 Days War, the end of Communism, the 1st Persian Gulf War and Terrorism. That is a lot and a lot of violent, heavy material. So how in depth we are able to go will be limited by what the girls can handle. It should be a good year even if very busy. The girls have maps for each chapter/event in their history book as well as a book on Charts, Maps and Graphs. They are also very fond of looking up all sorts of places on our World Map on our wall. (Globes are nice, but they become toys fast.)

MUSIC/ART
In order to make the coming year a little easier, rather than alternating Art, Music, Science and Home Economics every week on a 4 week cycle, I split Music and Art to do one through the Fall and one in the Spring. So we are doing Music in the Fall. We spent the past two years focusing on composers, mostly classical, but a few contemporary, and we've really enjoyed it but I thought we needed a break. So I decided to devote our music in the coming year to the orchestra. We will learn about each of the different groups of instruments as well as their role and position in the orchestra and then, hopefully, see a performance in December of a live orchestra. James will also give the older girls piano lessons. After Christmas we will move to Art, for which I purchased a Learn to Draw DVD from Seton. They have quite a few in the series but they aren't cheap, so I've only bought one for the time being. All my girls get upset when their drawings don't match their intentions or expectations, so I thought focusing on how to draw would be enjoyable and beneficial for them all without costing me a ton of money on supplies or sanity on clean up. Of course they will still have their play-doh and painting days, but those are just fun. :) The one DVD has something like 16 lessons, so while I have no problem buying the second disk should we get there, the one might last us the semester.

SCIENCE
Generally, I like how we did Science this year except for how little effort I put into it. I like the general categories throughout the year, using library and home books and youtube videos. What I didn't like about the current year was that I simply didn't plan well for experiments and Cecilia has experiment fever. She is begging, nagging to do any experiment she can. So I am planning next year to get a lot more hands on. I've already bookmarked pages for experiments for each subject and written down the names of each subject. God-willing I'll have the energy to do it all and they will all enjoy it.

HOME ECONOMICS
Home Economics is a real category and not. In part, it really does help us focus on certain skills I do want my girls to learn, like how to sew and embroider, but it is also something they are watching and learning through everyday life. I have a friend who crochets I'm planning to ask to teach us at some point. James loves baking fresh bread and he is working on teaching the girls how to bake homemade bread. The Fall does focus on sewing because, let's be honest, I'll be giving birth in October... anything sitting is more likely to happen. But in the Spring I also plan on including Baking/Cake Decorating, Flower Arranging (which I'm interested in learning more about myself), Money Management, Gardening, Cleaning and Organizing. 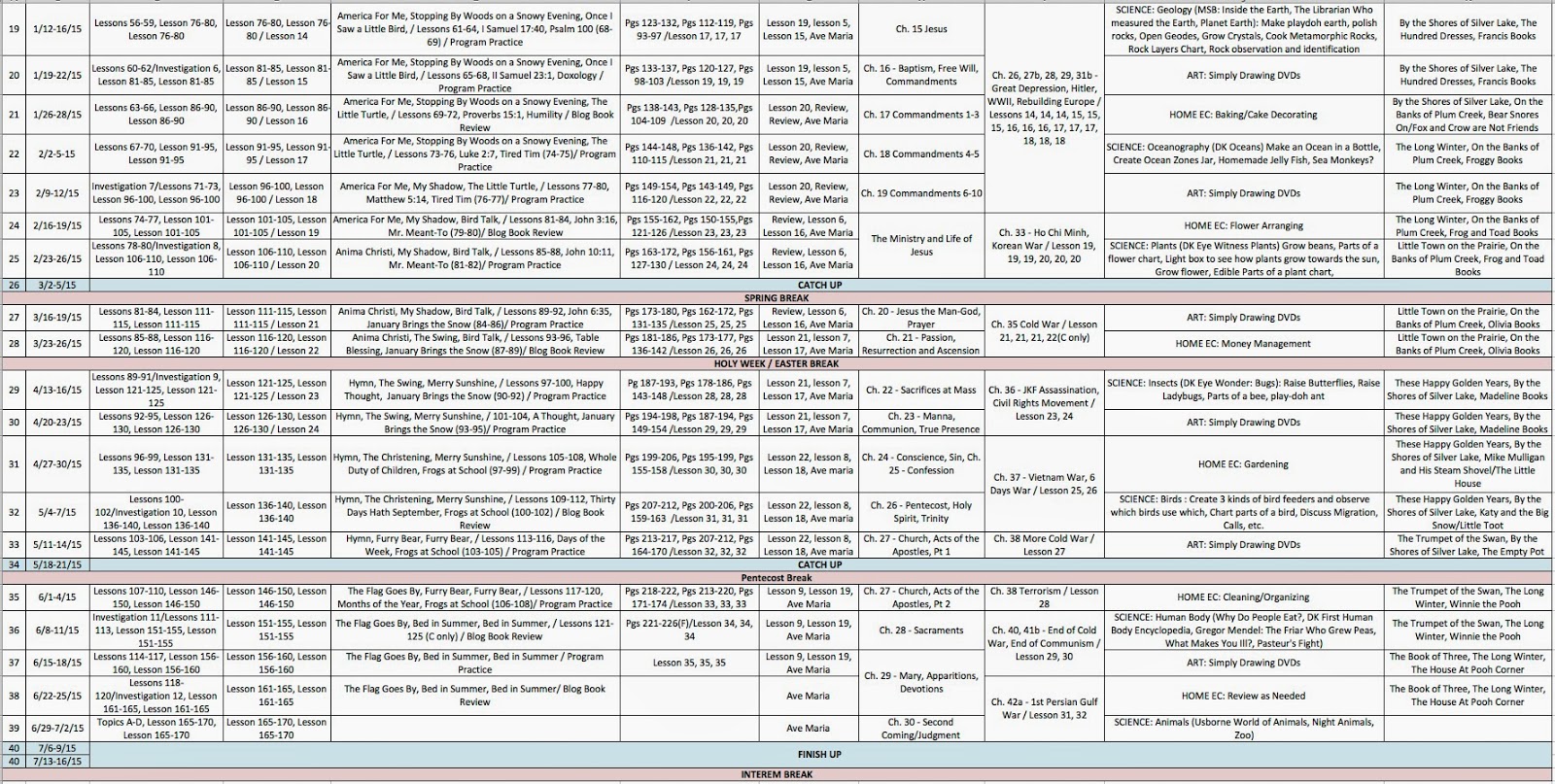 LITERATURE
I tried reading aloud to the kids this year. I tried during the afternoons and James tried during the evenings but it just doesn't work. Sometimes we are simply too tired but other times we are just sabotaged. It is hard reading aloud while Teresa plays the harmonica in the background! So this year I am simply assigning age-appropriate books to be read on their own. My girls' favorite time to read is before bed so I think it will work well giving them a book to read a chapter of each night for four or so nights a week.


Hopefully these images open large enough to read. It is hard to get my master schedule captured in such a small space and still keep it legible, but it is a schedule for a full year for 3 kids in 3 different grades.

I don't schedule our year like most schools. We begin the first week in August and officially finish half way through July. We do, however, always take off all of Thanksgiving week, the week of December 17th (when the O Antiphons begin) through the week of the Epiphany, James' scheduled Spring Break, Holy Week and Easter Week, a week for Pentecost and finally two weeks before beginning the next school year. I also schedule in "Catch Up" weeks, wonderfully recommended to me by a reader, where we are able to catch up on anything we have gotten behind in or been unable to treat as thoroughly as we'd like and those weeks are usually blissfully light and enjoyable. I also blocked off one week for when the baby is born. Obviously 1 week might not be enough, but since I can't know exactly how that will transpire or when, I'd rather need to use a full catch up week than have extra time just sitting there and, of course, I can always move that week as necessary. One week may seem optimistic, and it might be, but Brigid was such an easy baby, I was back to homeschooling 6 days after giving birth last time, so I'm just going to run with it for now. We also generally only homeschool Monday through Thursday, only doing schoolwork on Friday if there is something for the week we haven't finished.

All that said, plus a new baby come the Fall, and I am so glad Teresa isn't ready for school yet. :)
Posted by Katherine at 4:05 PM