Since we were less than an hour from Orlando, it only made sense to stop by Disney for a couple of days before heading home. So we spent 2 days, one at the Magic Kingdom and one at the Hollywood Studios.


I don't have quite so many pictures of Disney (you can breathe a sigh of relief) for two simple reasons. One, we've been there several times before so, apart from the kids, there isn't much for me to take pictures of I haven't already. And two, 5 small kids overstimulated with a pregnant mommy makes for a busy day and I simply wasn't reaching for my phone or camera very much. There were a few highlights though. 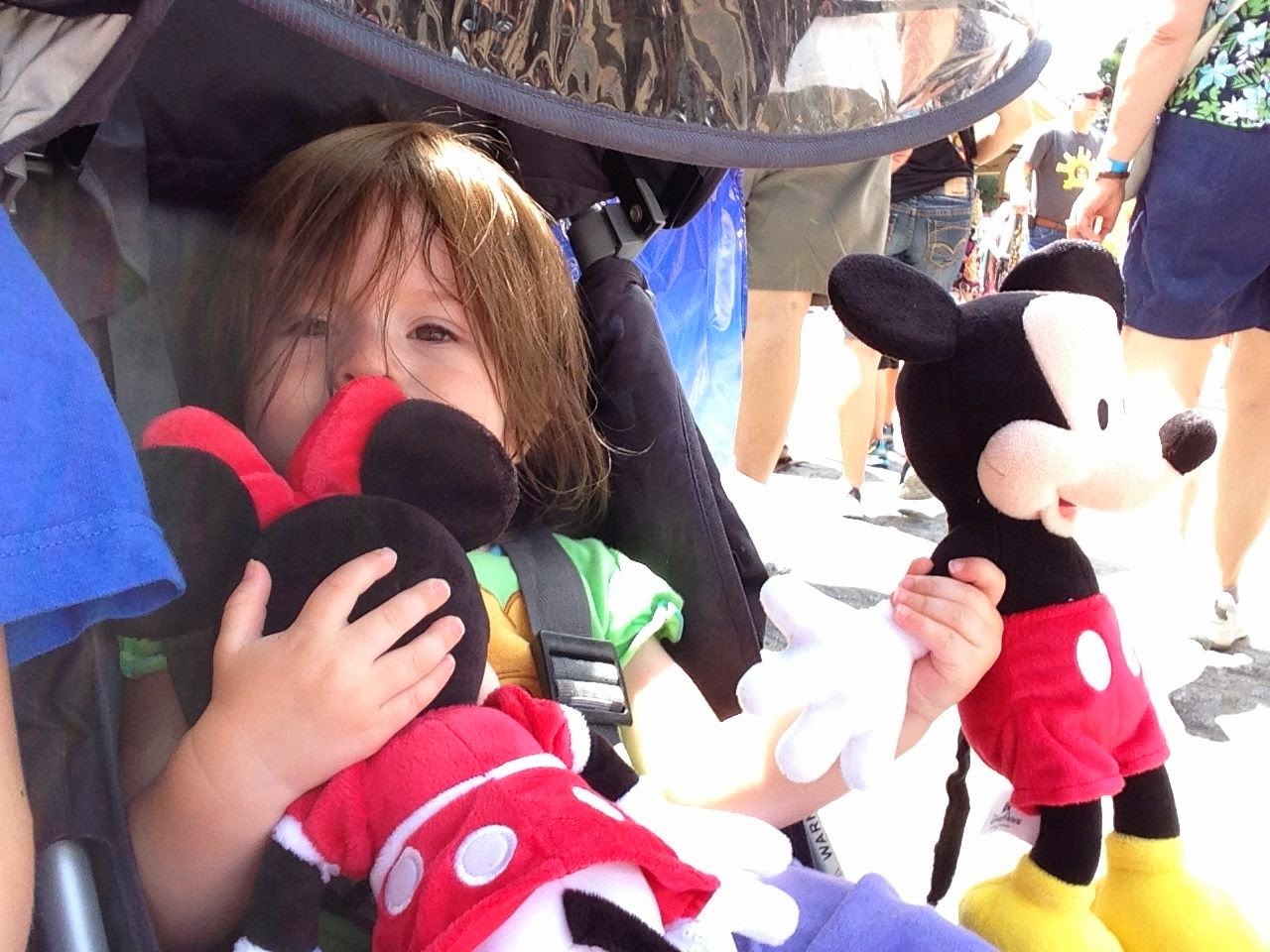 While my parents and James took Felicity, Elizabeth and Teresa on the Haunted Mansion, Cecilia, Brigid and I browsed. Brigid seemed to be having teething pain and was overtired when she spotted a Mickey and Minnie just her size and just within her reach. She actually tried to grab multiples of them but I held her at one each. She refused to let them go though. Rather than set off an overtired, grumpy teether, I just bought them. Teresa tried multiple times to lift them from her but Brigid now has her own small Mickey and Minnie in her crib that she sleeps with every night. 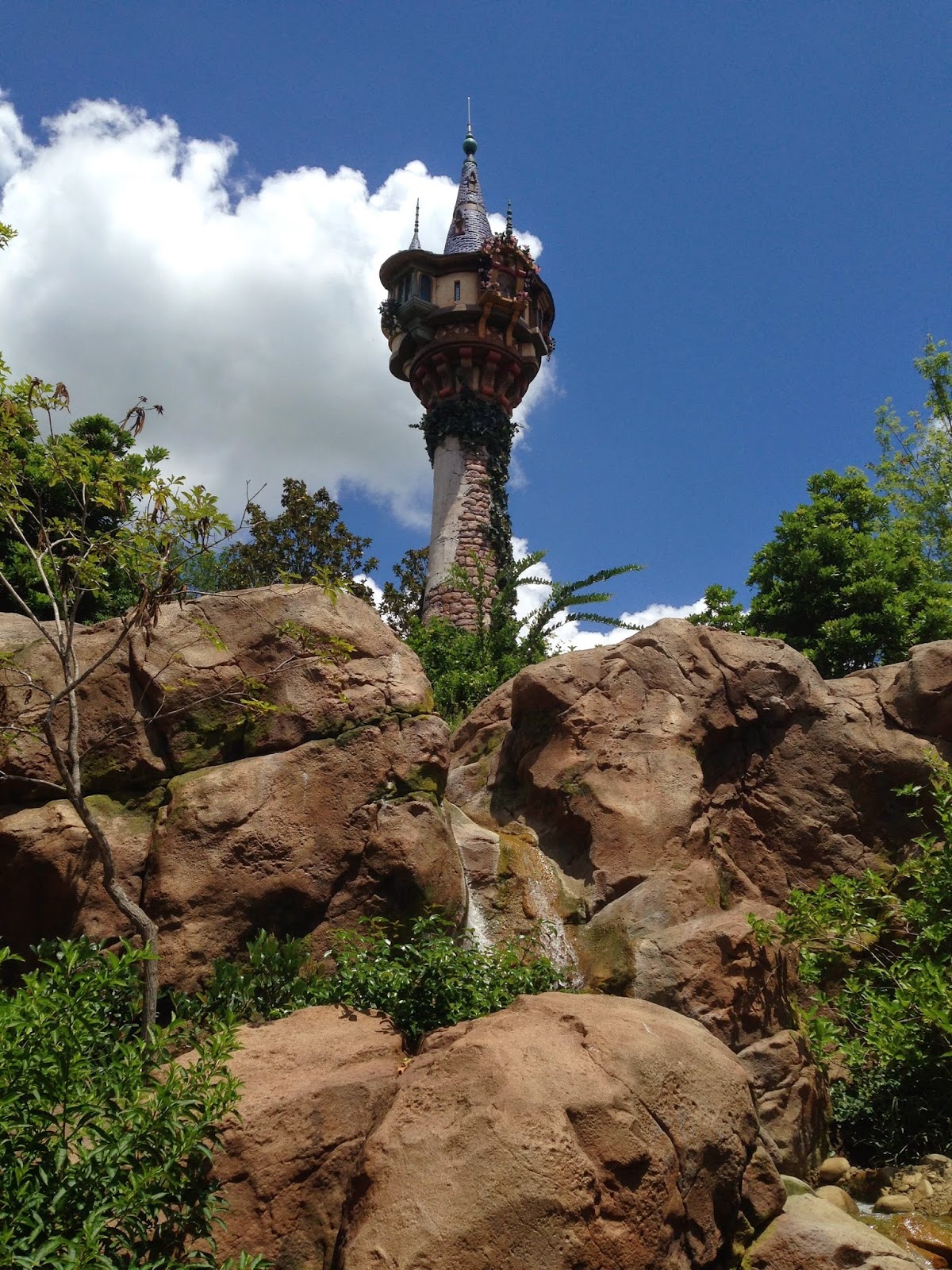 The last time we were here there was still a fair amount of construction through Fantasy Land. I liked the finished Rapunzel's tower even if it does only mark a bathroom, it was a much appreciated bathroom when Brigid really needed one.

We did not get on the new Snow White and the 7 Dwarves coaster. It will be on our list next time but it had not opened yet when we got our fast passes and we simply were not willing to wait 90 minutes to ride it.

Felicity really wanted to ride Thunder Mountain Railroad but it was closed for technical difficulties when we were by it and later the wait was too long. She is still upset she never got on it, so it will be a high priority the next time we go. My daredevil girl. 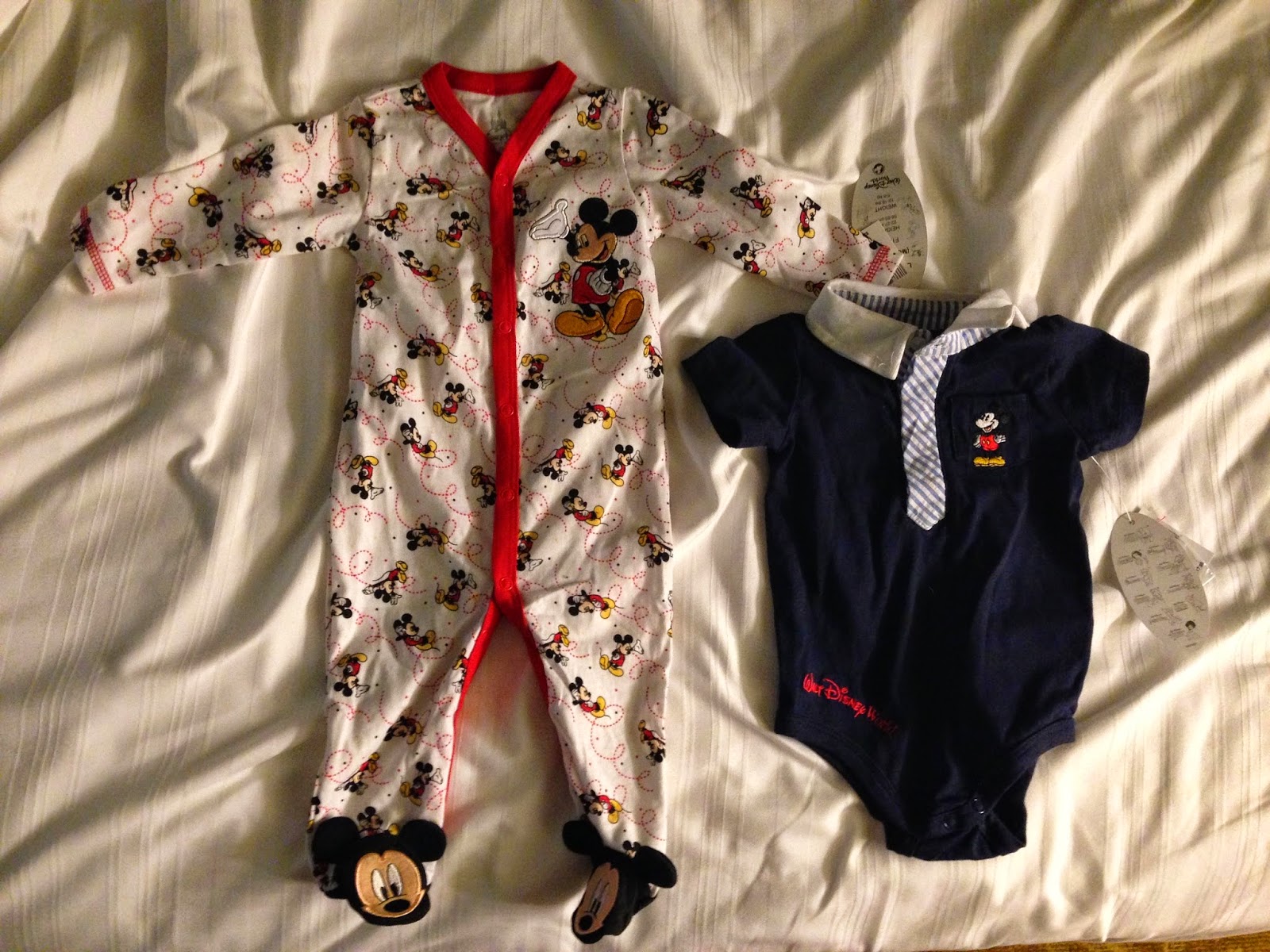 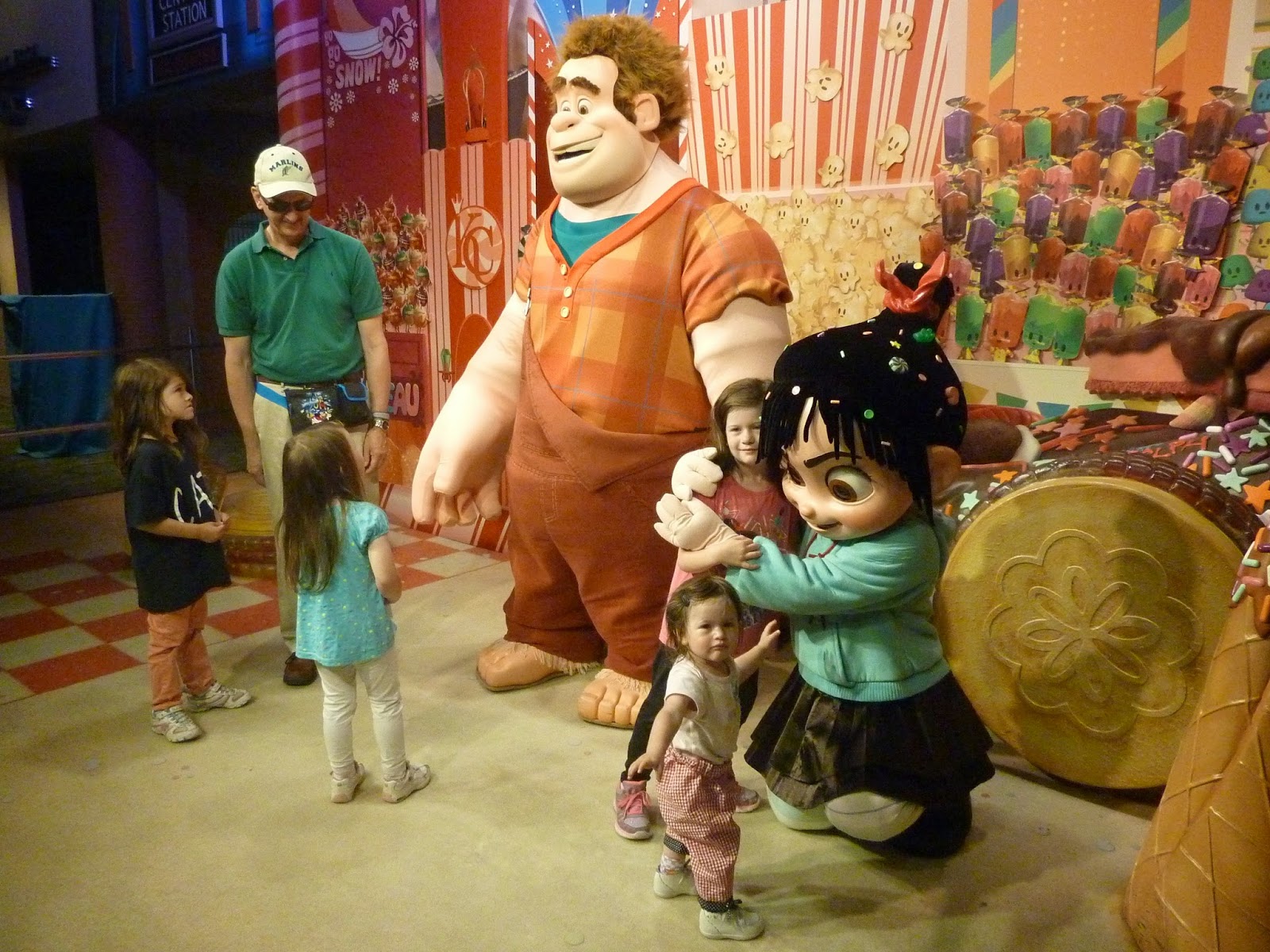 The girls met Wreck-It Ralph and Vanellope. Brigid was hesitant but fascinated. 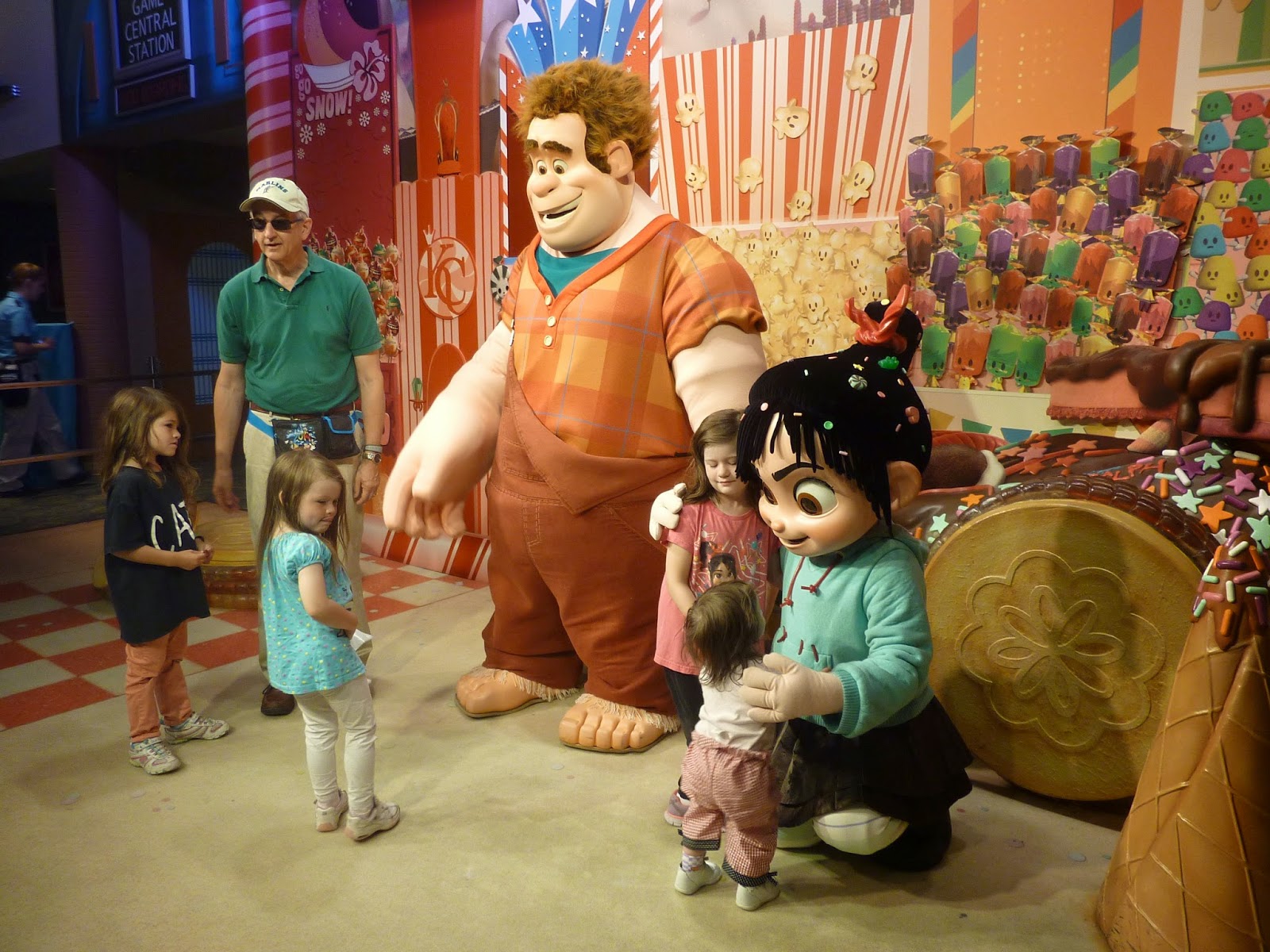 Felicity is a huge Vanellope fan. 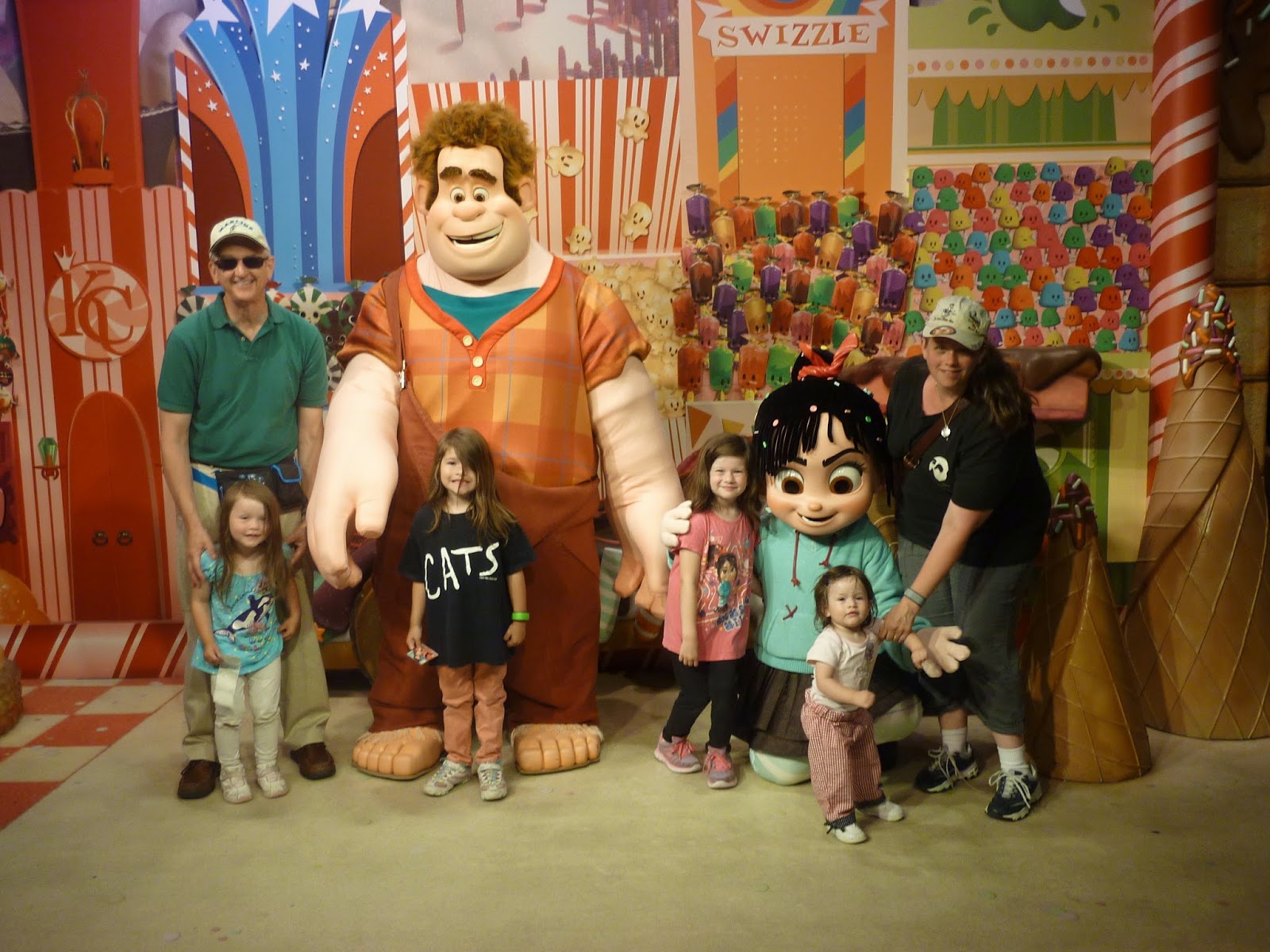 Teresa was a bit hesitant of the huge Ralph but still loved them. 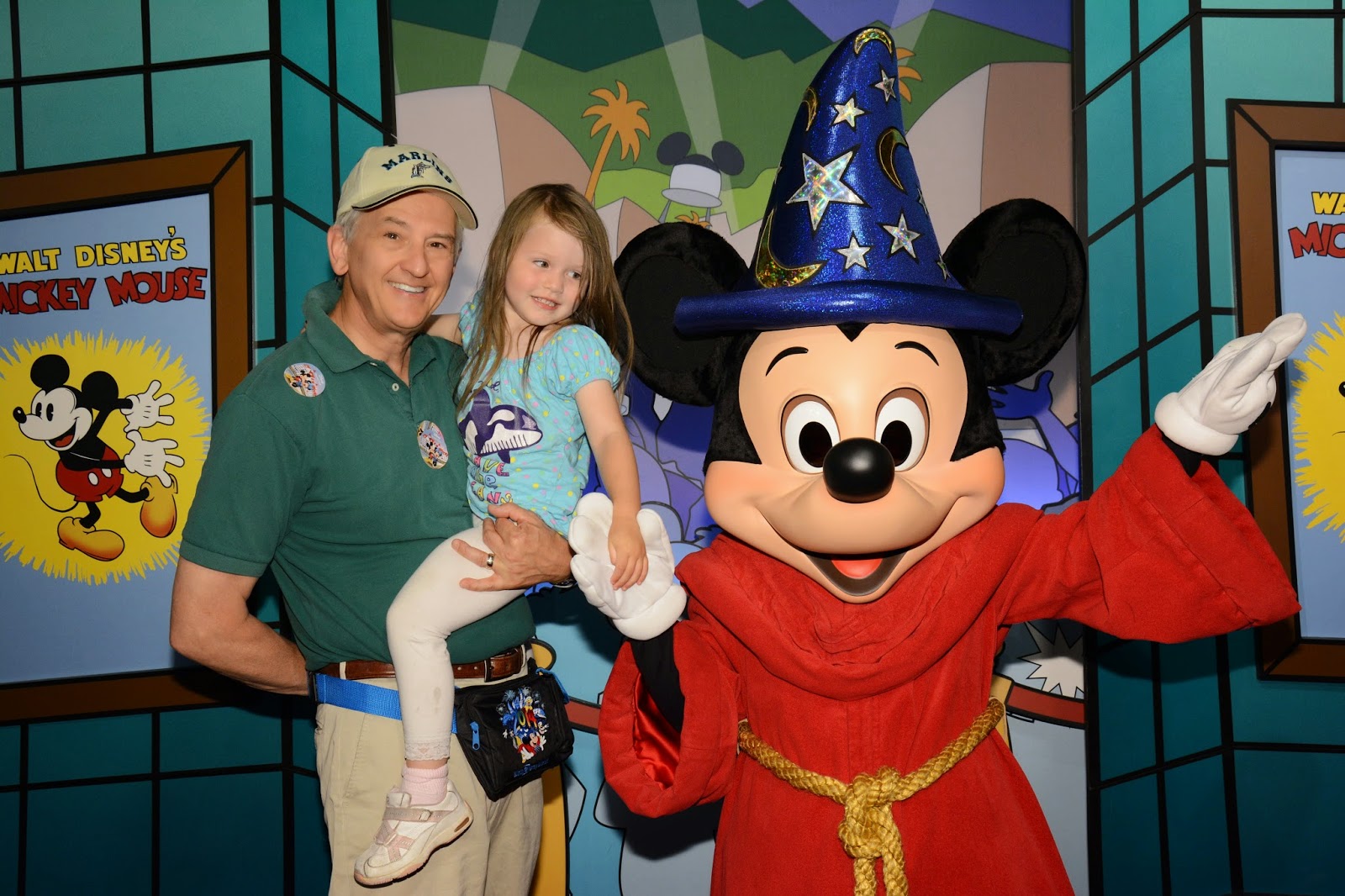 Teresa is a HUGE Mickey fan. She cannot let him pass by if she sees him. 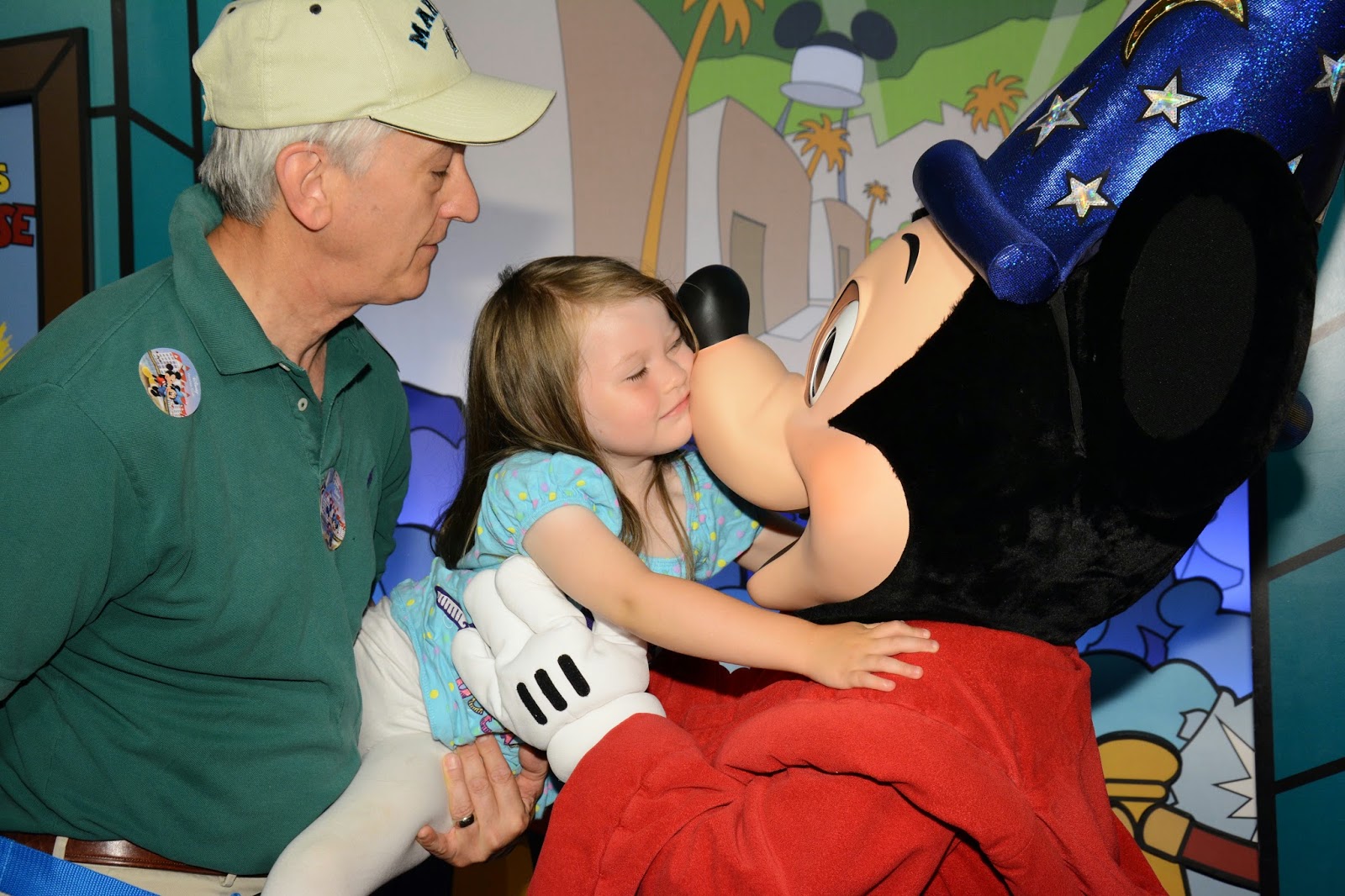 So adorable. I think a Mickey cartoon where he babysits Teresa is in order. 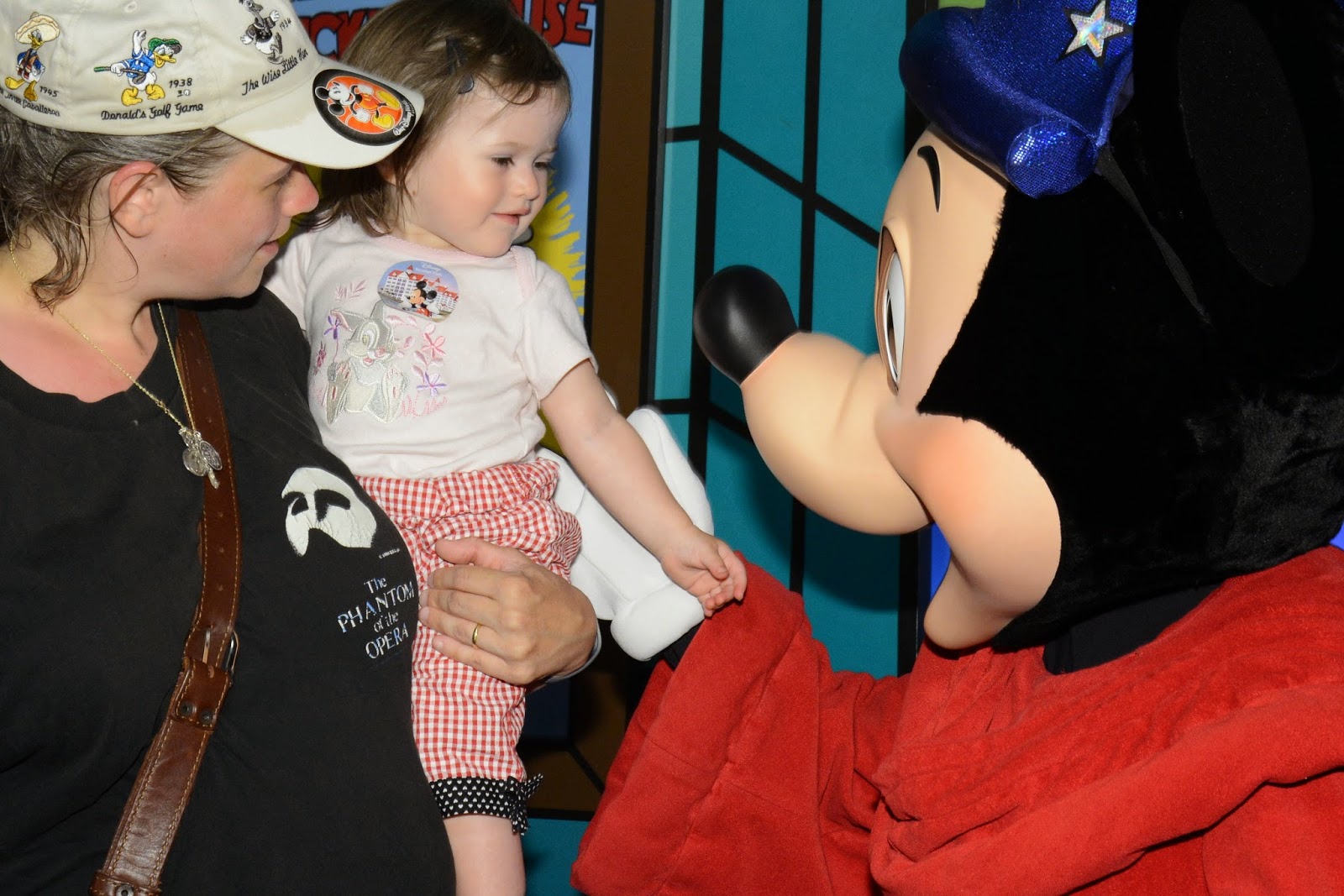 I have a picture of each of the girls meeting Mickey or Minnie as a baby or toddler. In Cecilia's she grabbed Mickey's nose. Felicity, my shy one, didn't get quite so close. Elizabeth took Minnie's hand. Teresa cuddled Mickey. But I didn't have one of Brigid. 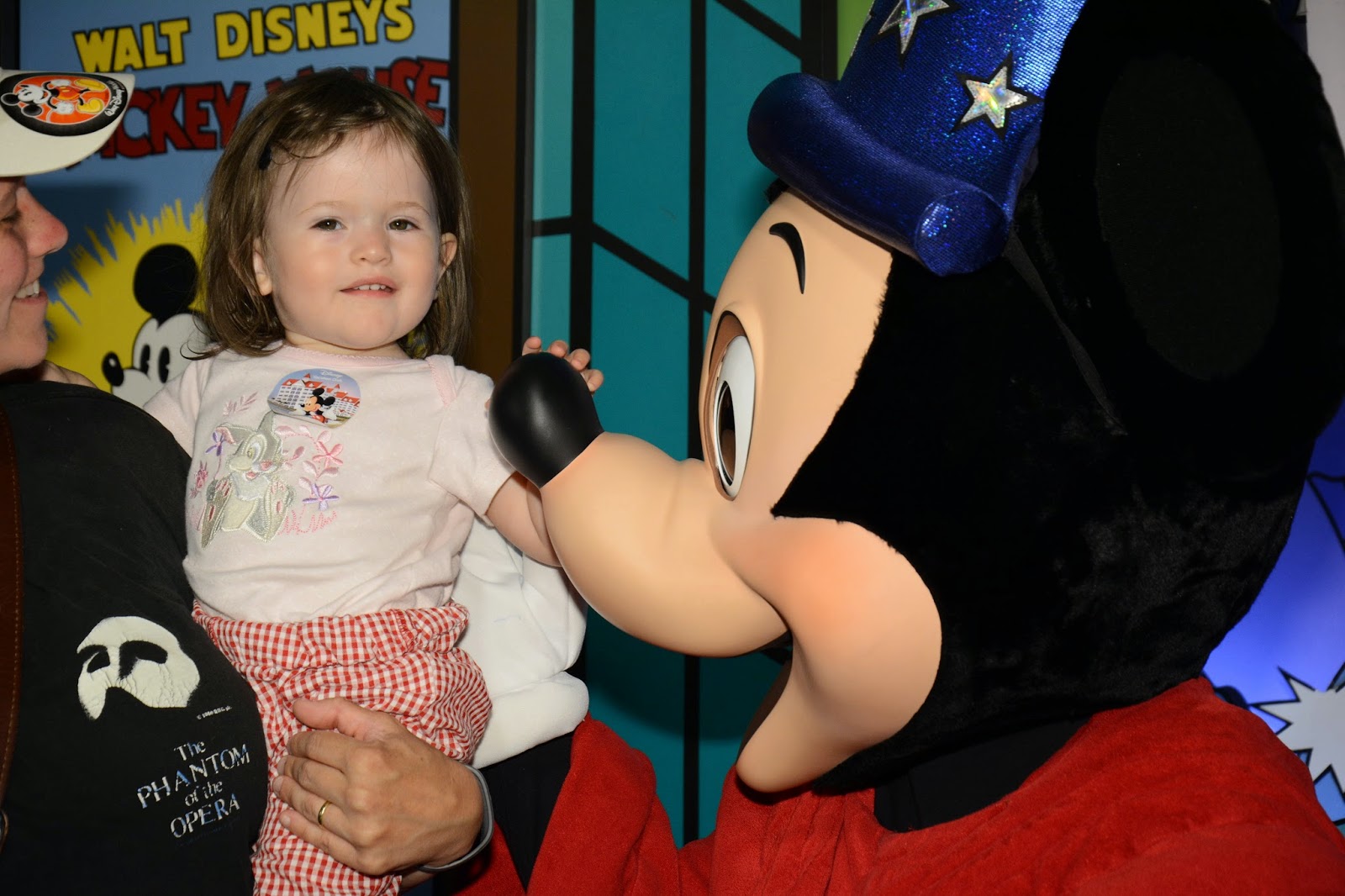 I'm not sure I can decide which is better, but, like Cecilia, we got another nose-grabber. We'll forget afterwards she tried to poke him in the eye. Too cute though. 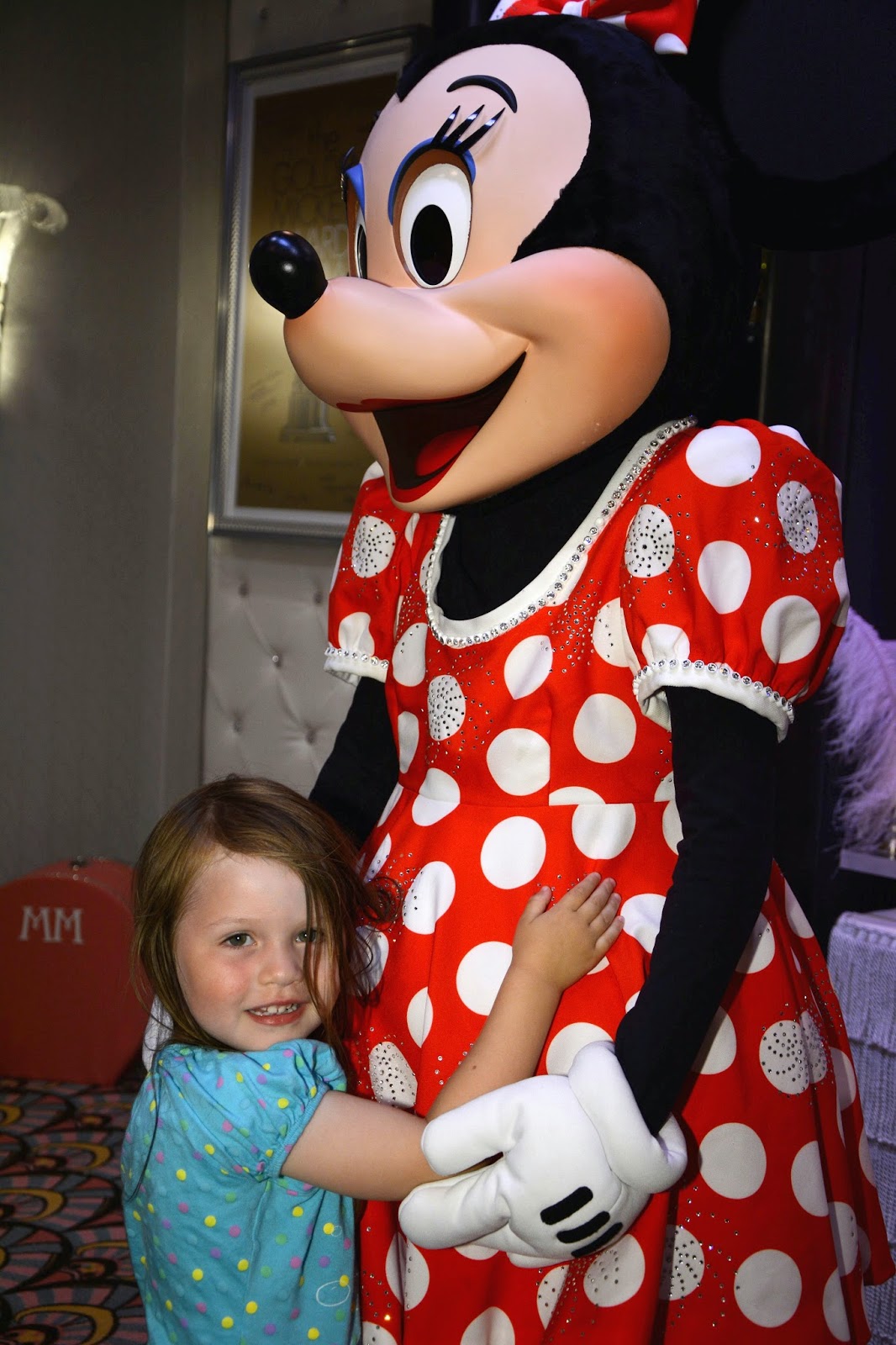 Teresa knows you can't have Mickey without Minnie and she lit up meeting her. While she had met Mickey before, I don't think she had ever met Minnie. 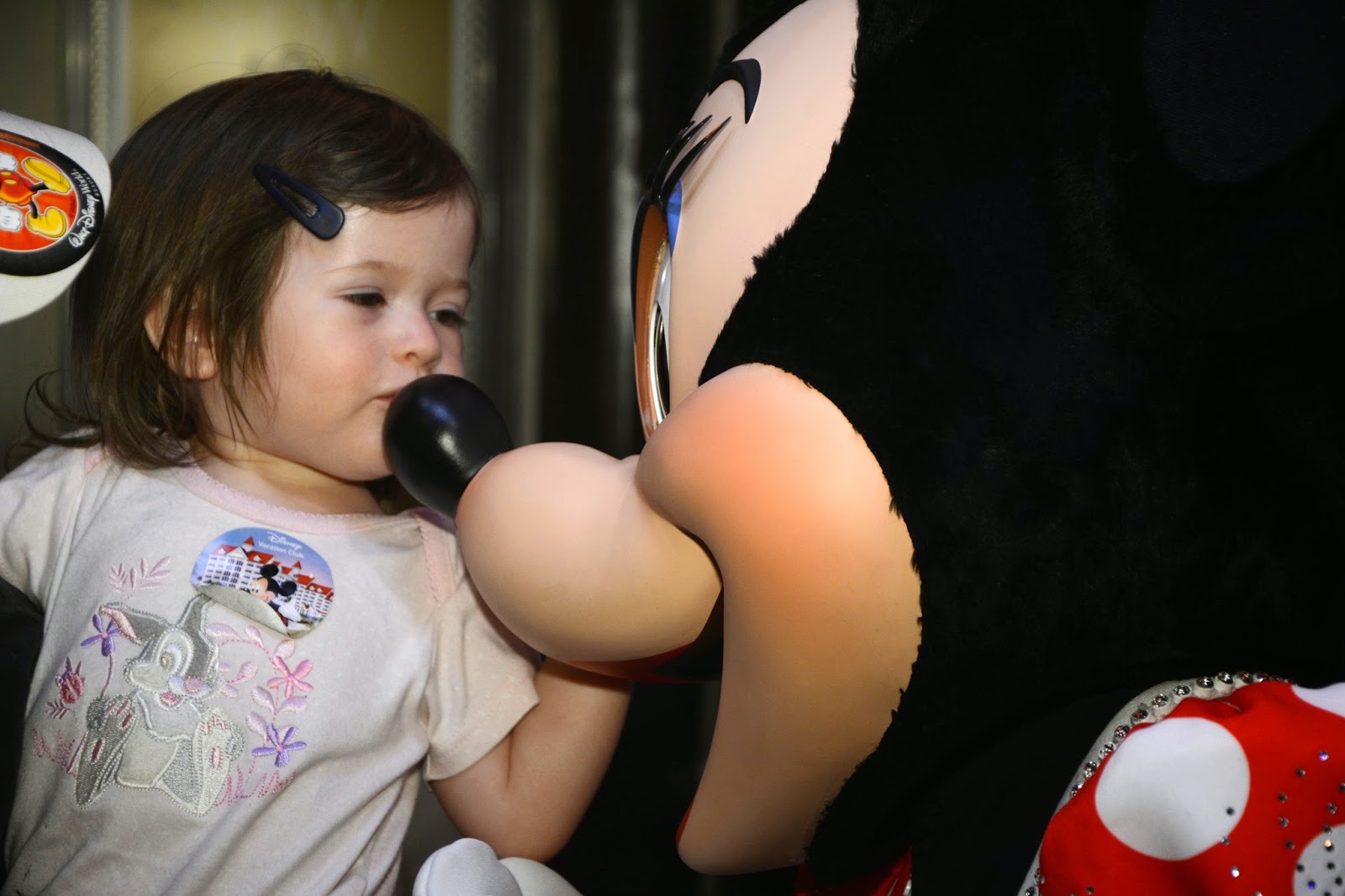 Brigid gave her a kiss on the nose. Priceless. 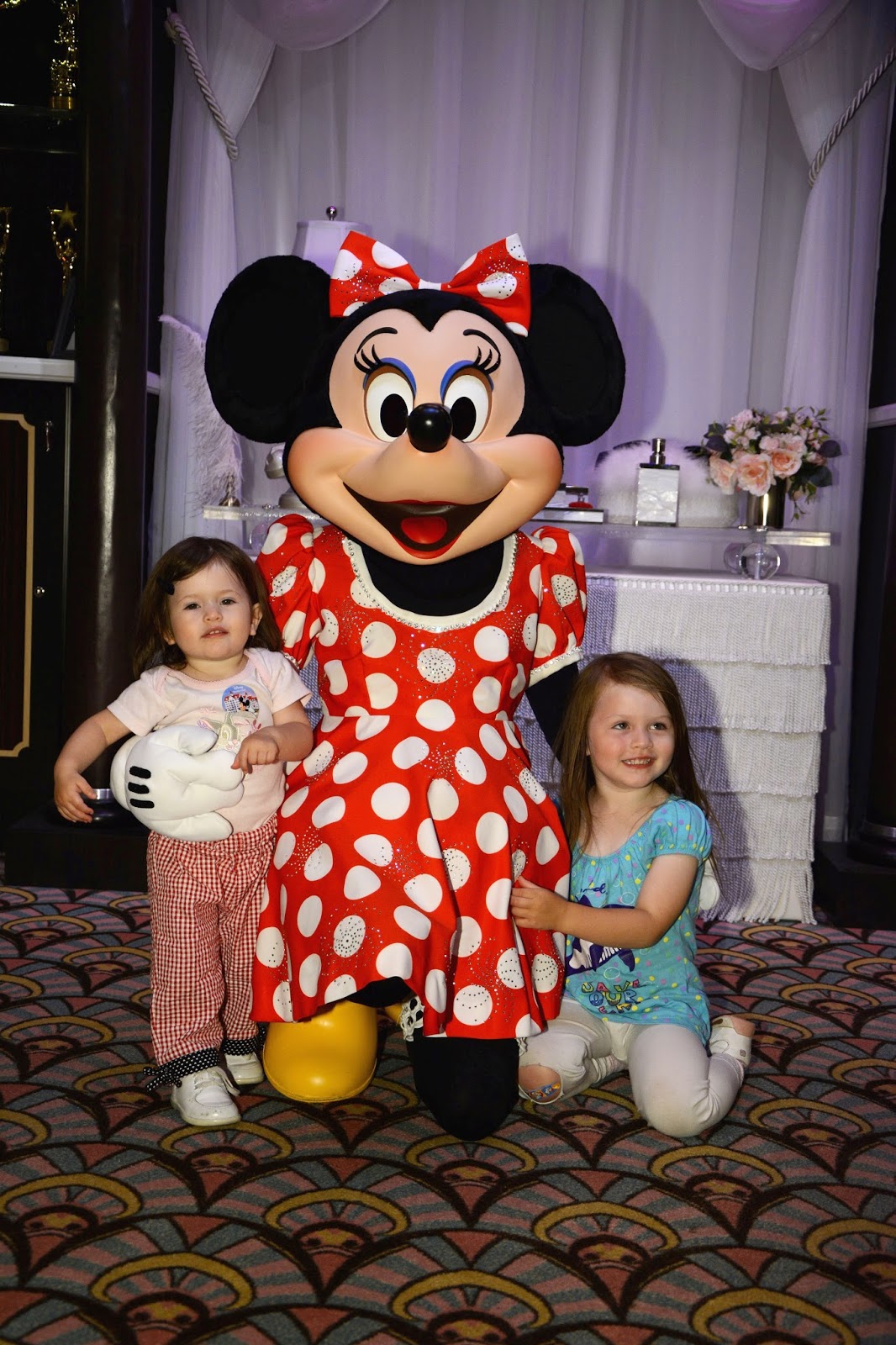 Everyone had a good time and the girls didn't want to leave.

Friday, June 20th, we began driving back home. It took until 2am (a special thanks to the construction in Virginia that closed 3 lanes of I95) to get home, but we made it back without stopping at a hotel.

Naturally the girls have been going through vacation withdrawal. Fortunately the DVD of The Lego Movie arrived when we got home and it has been easing their pain.

I'm rather proud to have finished the unpacking and laundry in only 3 days, especially considering one of those was a Sunday, during which I generally prefer not to do anything.

P.S. - If you go to Disney and meet any characters, they have cast members who will offer to take pictures for you and you can download them later. We've done this before and the advantage is you can be in the picture or hold your child for the picture. However, I only discovered this week that Disney has significantly upped the prices just to download a picture. Not to print, but just to download one picture is $14.95. So I heartily recommend just taking the photos yourself or, if you have a very young one, having someone with you to take it for you. (And they aren't professional photographers anyway... one I didn't download but would have been a great shot was totally blurry and three of these I had to lighten.)

Posted by Katherine at 7:14 AM