Goin' to a Weddin'


So, on June 10th I dropped Rosie off at the kennel and began packing for all of us for an extended trip. On June 11th, we began driving. We made it as far south as Santee, South Carolina before we stopped for the night. On Thursday, June 11th, we made it to Florida, and, of course, it was not long after we got to the Sunshine State that it began raining. And we drove quite a bit through this 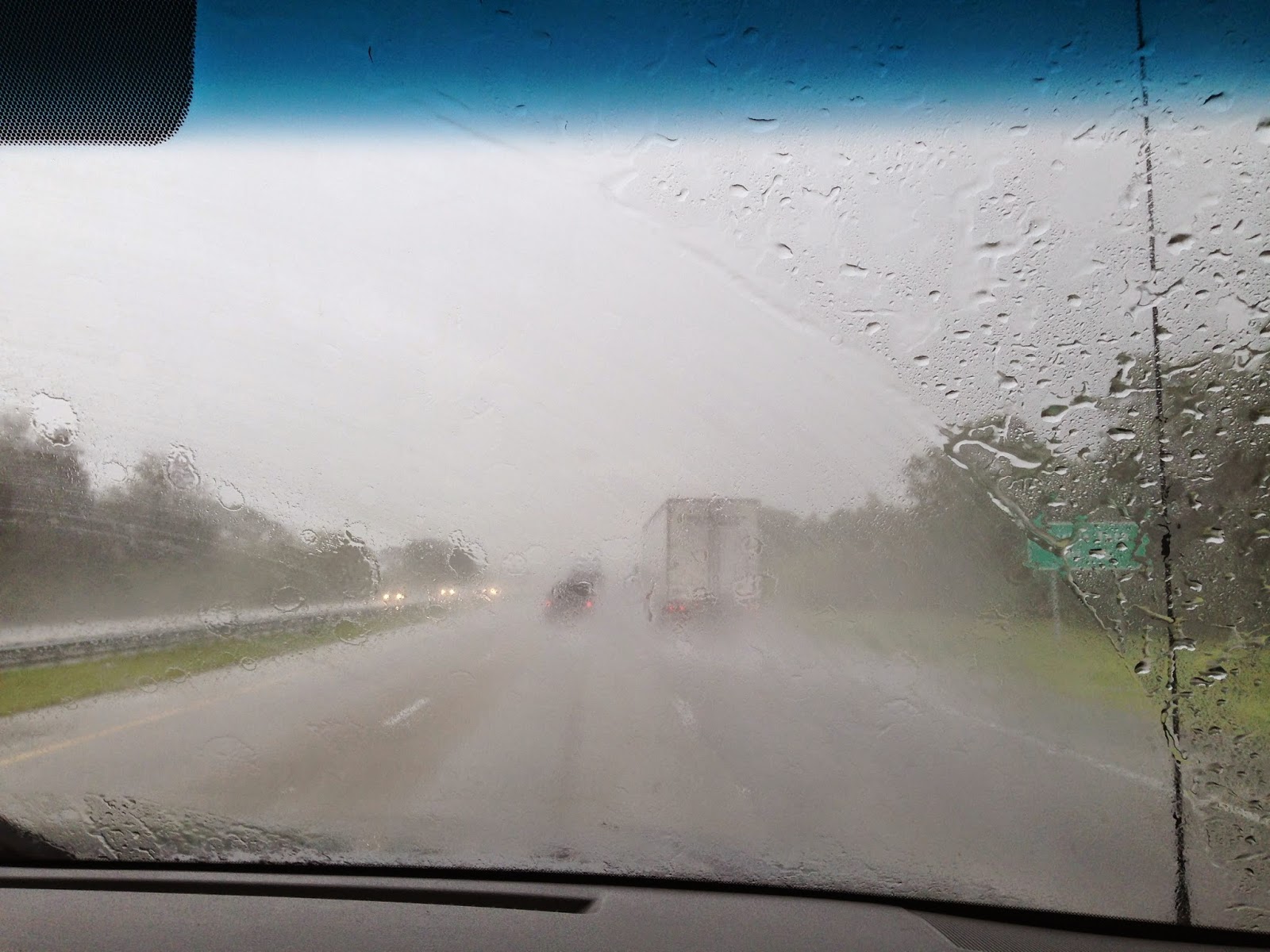 The weather slowed us down quite a bit and we didn't arrive at Miami Beach until 7:30 or so. By the end this was my favorite car music:


We spent Friday, the 12th, taking the kids to the beach and the pool before the rehearsal. 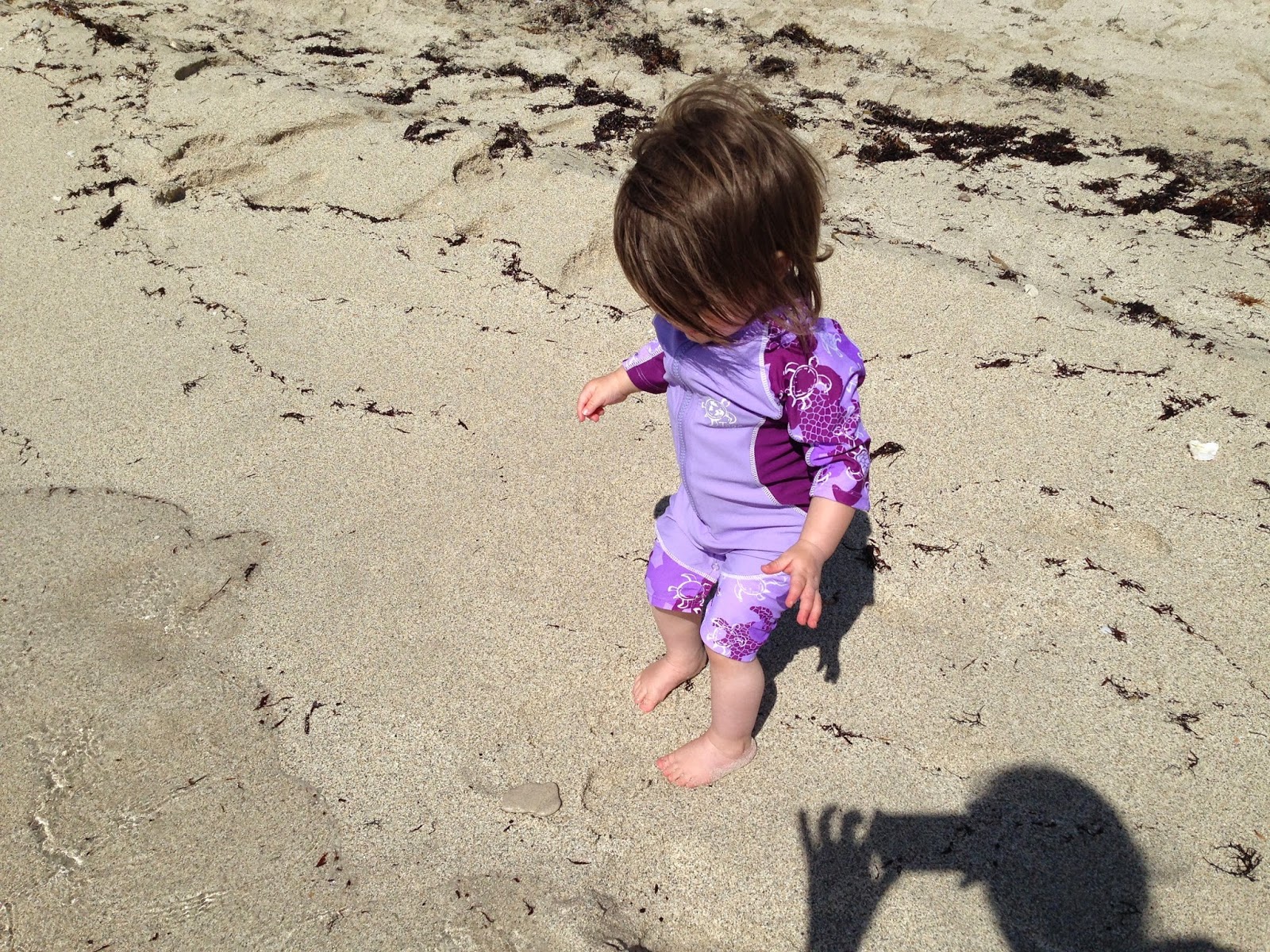 My kids, for the most part, are like me, and really not beach people. Elizabeth played a bit in the sand and, of course, Teresa threw sand around, but only Cecilia would even venture into the water, Felicity refused to leave the towel, and when I set Brigid down she shook in panic that this ground actually sank and shifted beneath her feet. 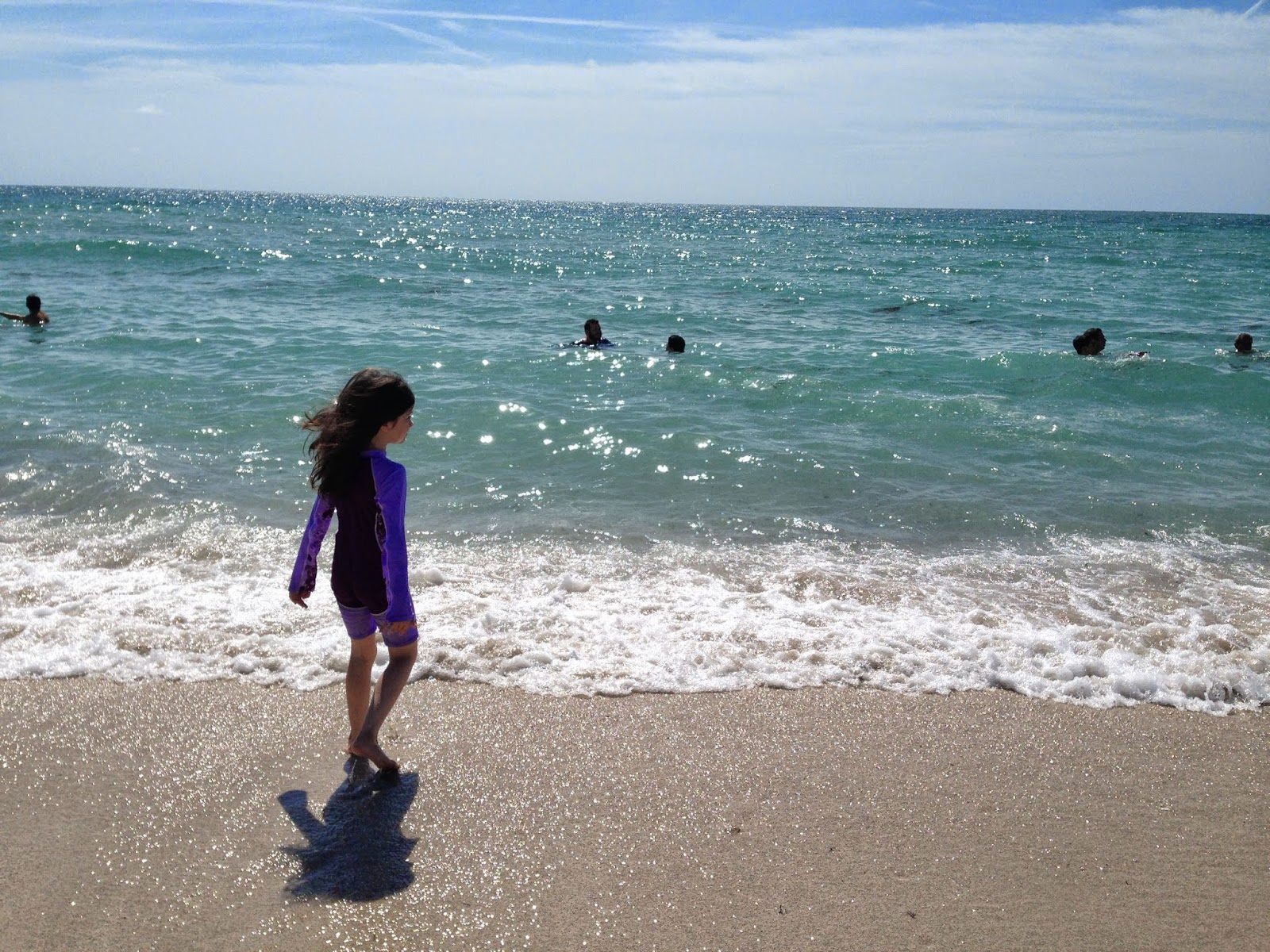 We really didn't last long before we ditched the beach and went to the hotel pool. Unfortunately since I'd forgotten to bring their float vests and the hotel didn't have any, Teresa refused to go in the water and Brigid preferred to sit on the top step or wall. The older three had fun though and I did manage to buy 2 small ring floats from the hotel store.

We made it through the rehearsal, despite the wedding coordinator from hades who tries to argue that Cecilia, despite being the ring-bearer, shouldn't actually carry the rings but just the pillow because "she might lose them" on her way up the aisle. Yeah, my eyes couldn't roll far enough back in my head. 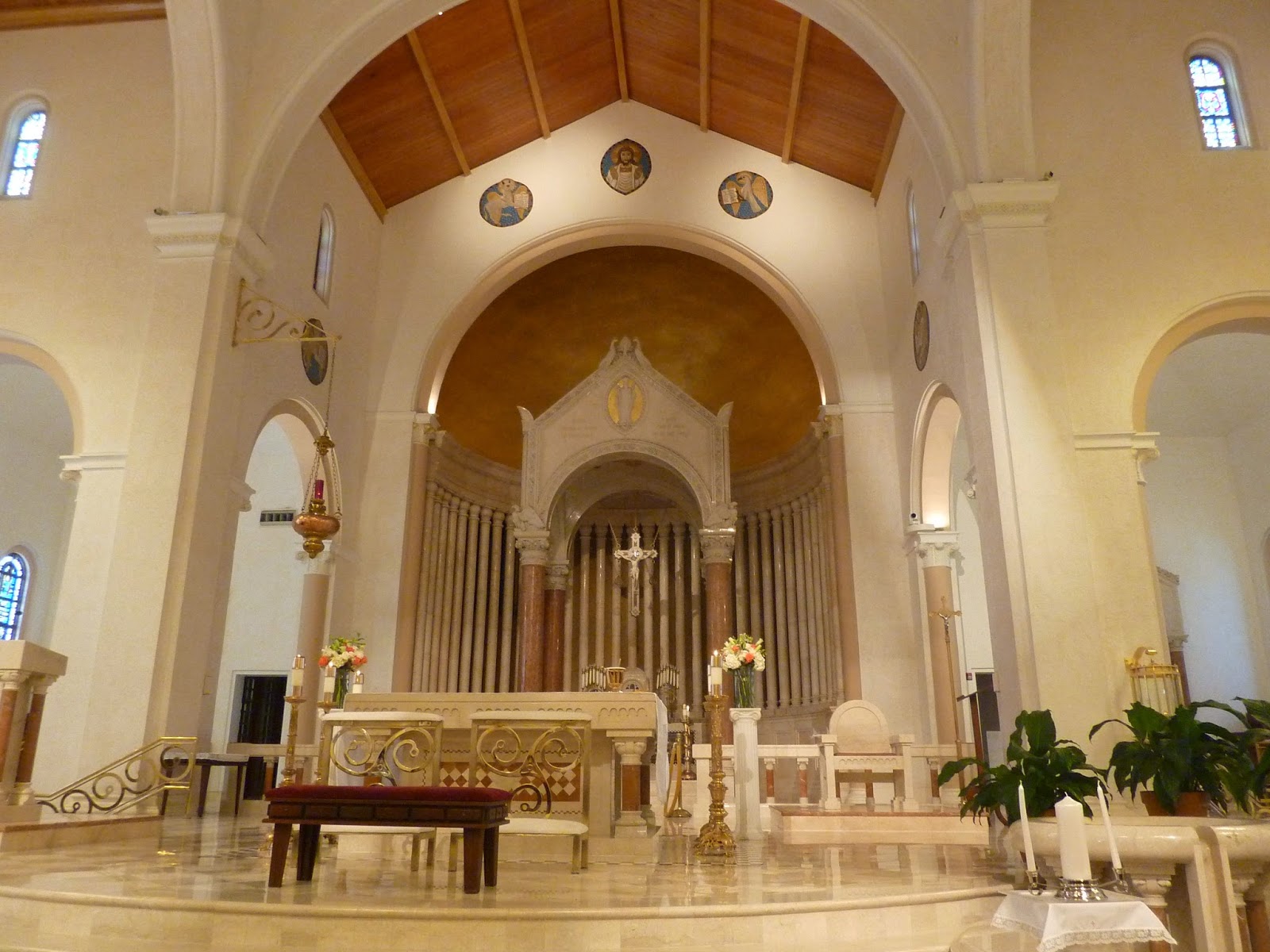 On Saturday the wedding was at a beautiful church named after St. Patrick. Felicity even took a few pictures of the Church: 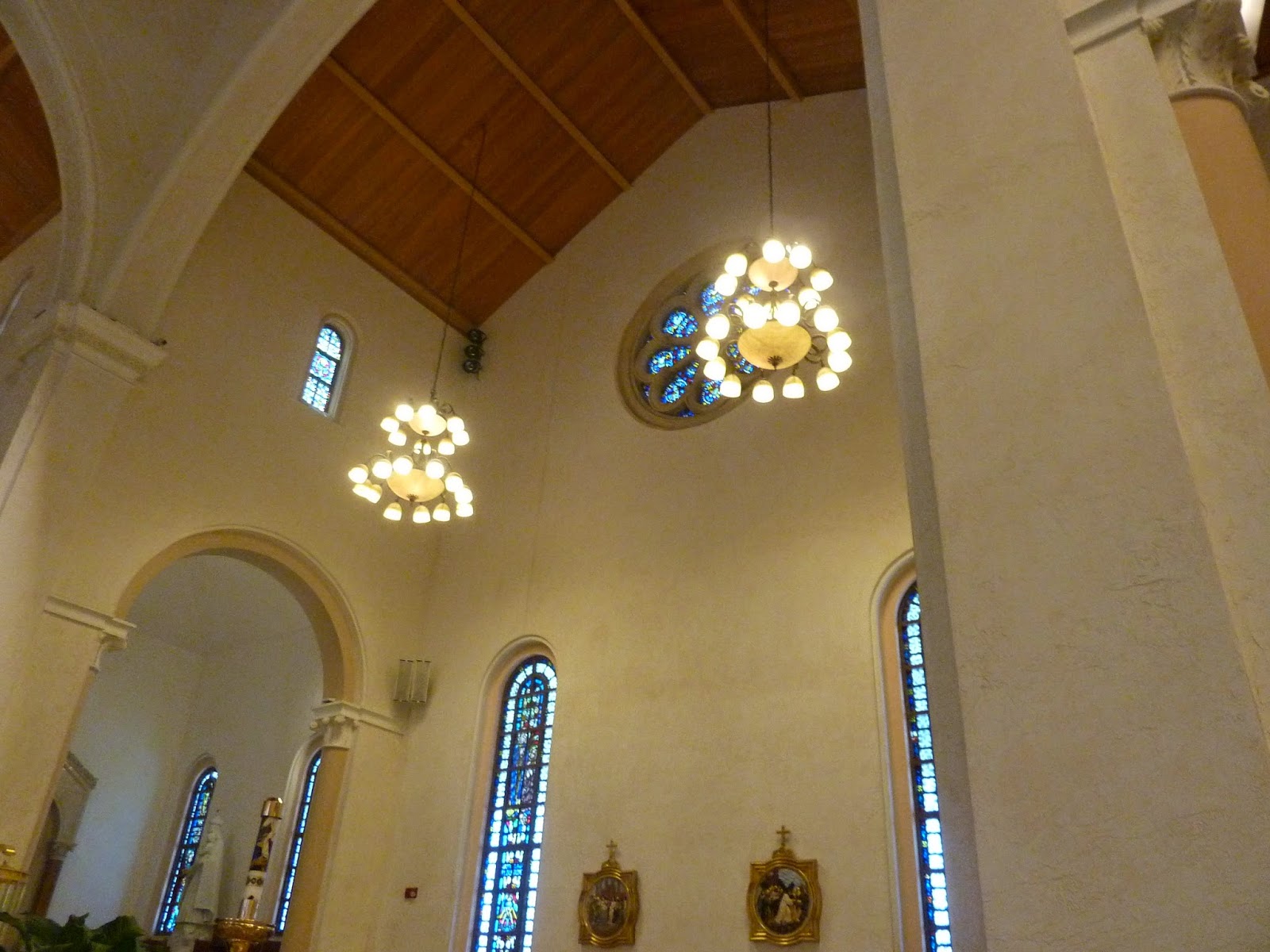 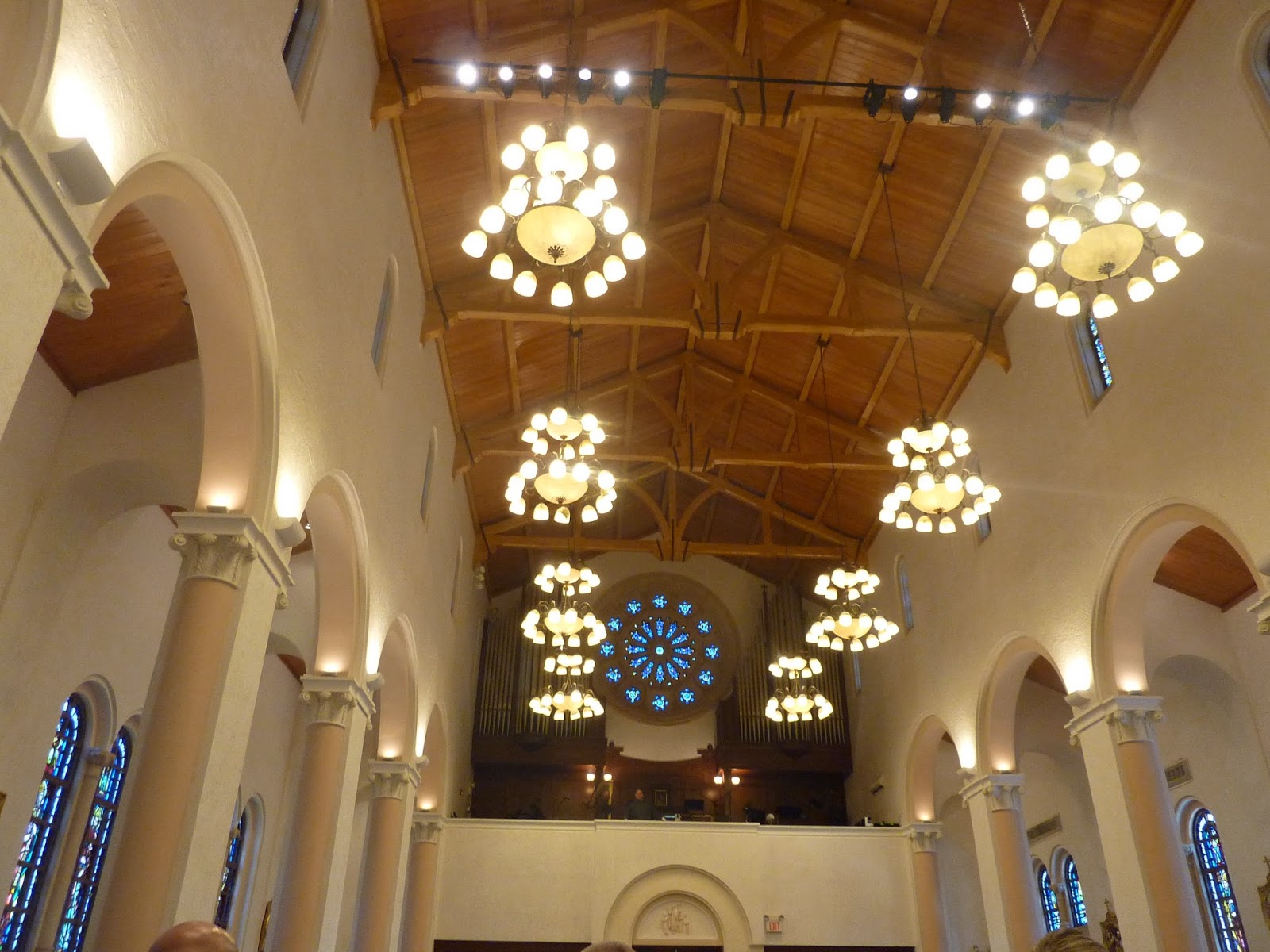 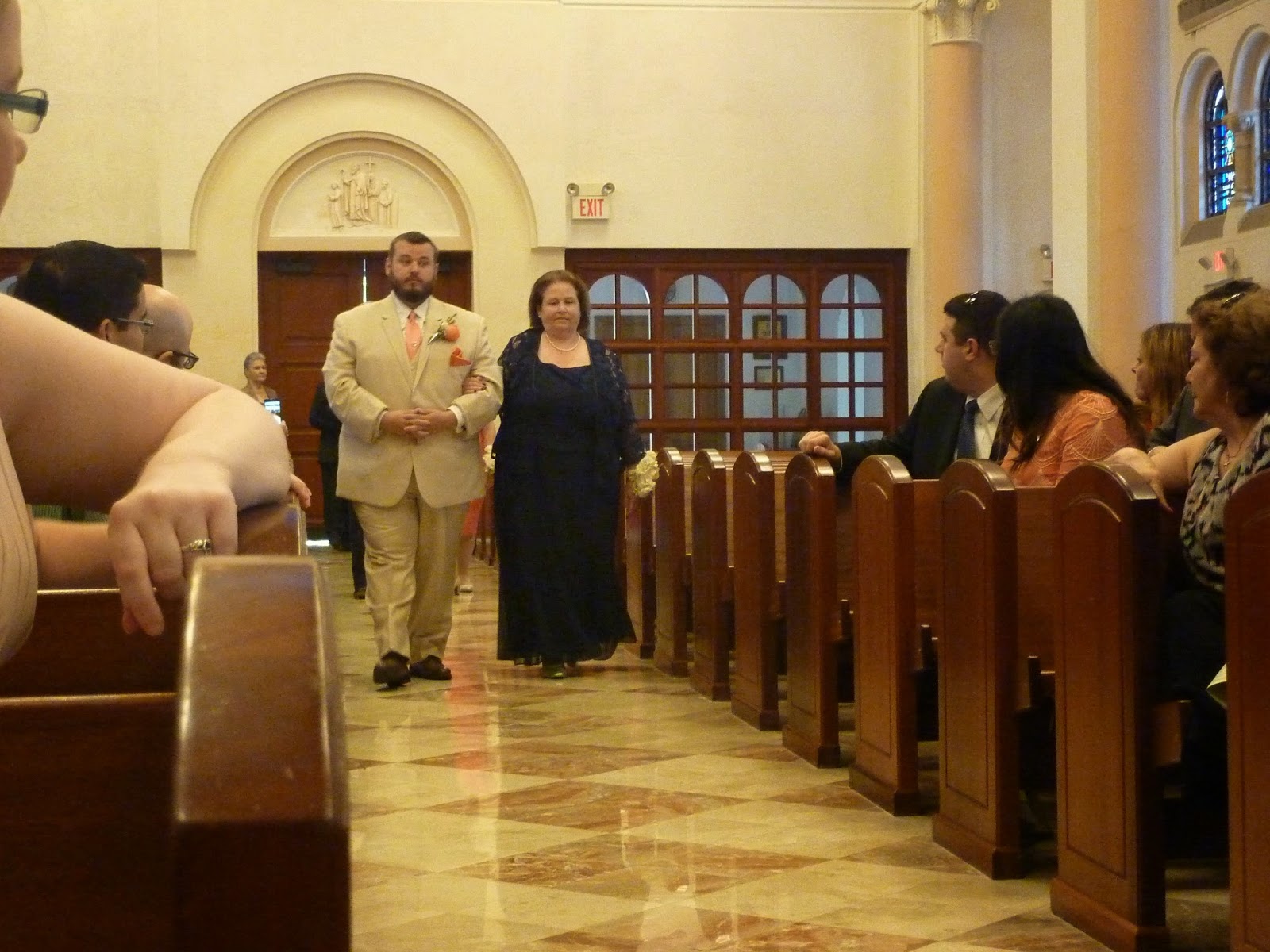 The groom, my brother, walked my mom up the aisle. And then James walked down the aisle with Teresa and Brigid because both were antsy as can be. Fancy dresses and Church at a Saturday? They weren't buying it. 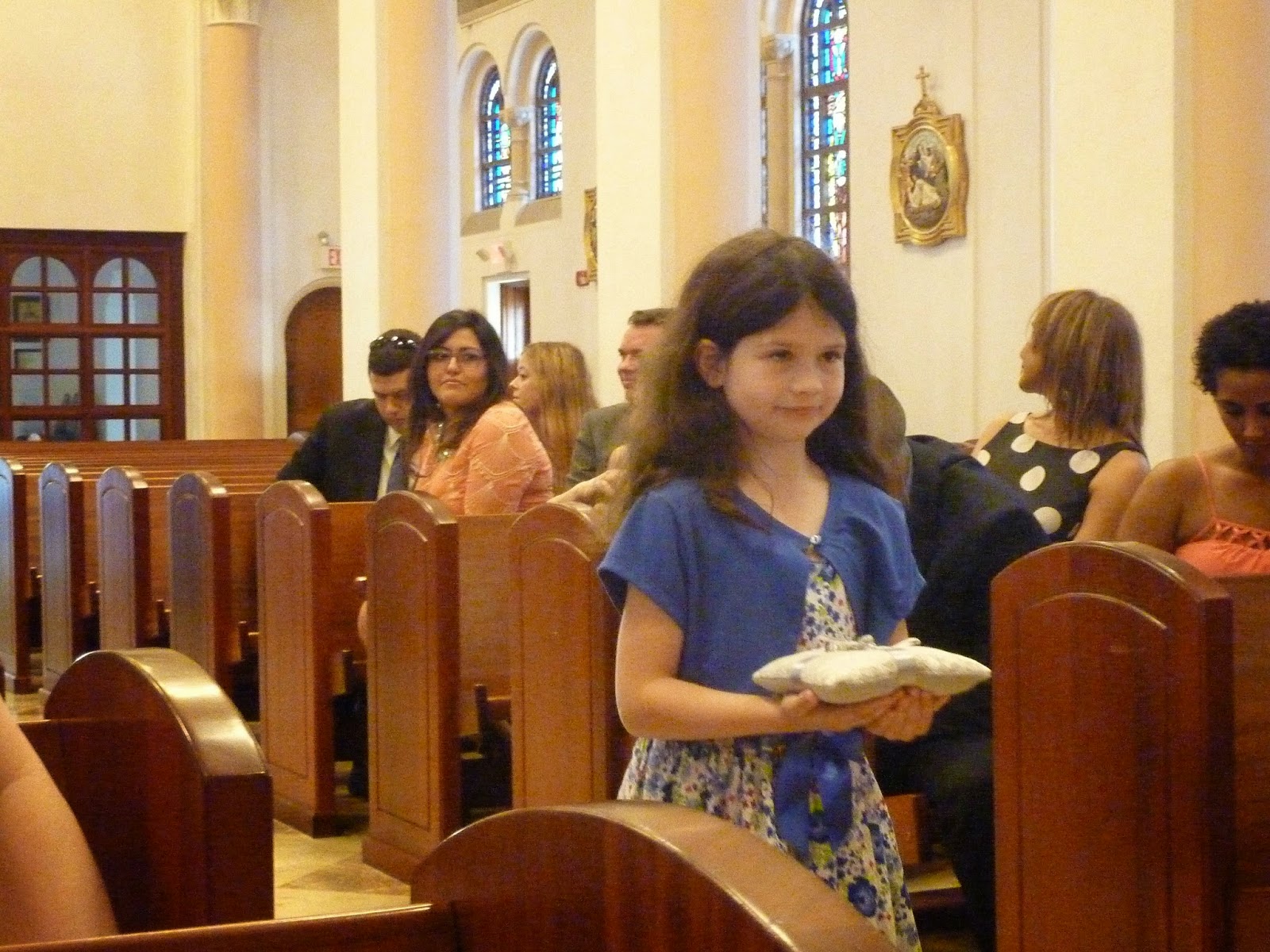 Cecilia carried the actual rings up the aisle without incident and did a fantastic job. She was even allowed to keep the pillow as a bargain for being in the family pictures afterwards. 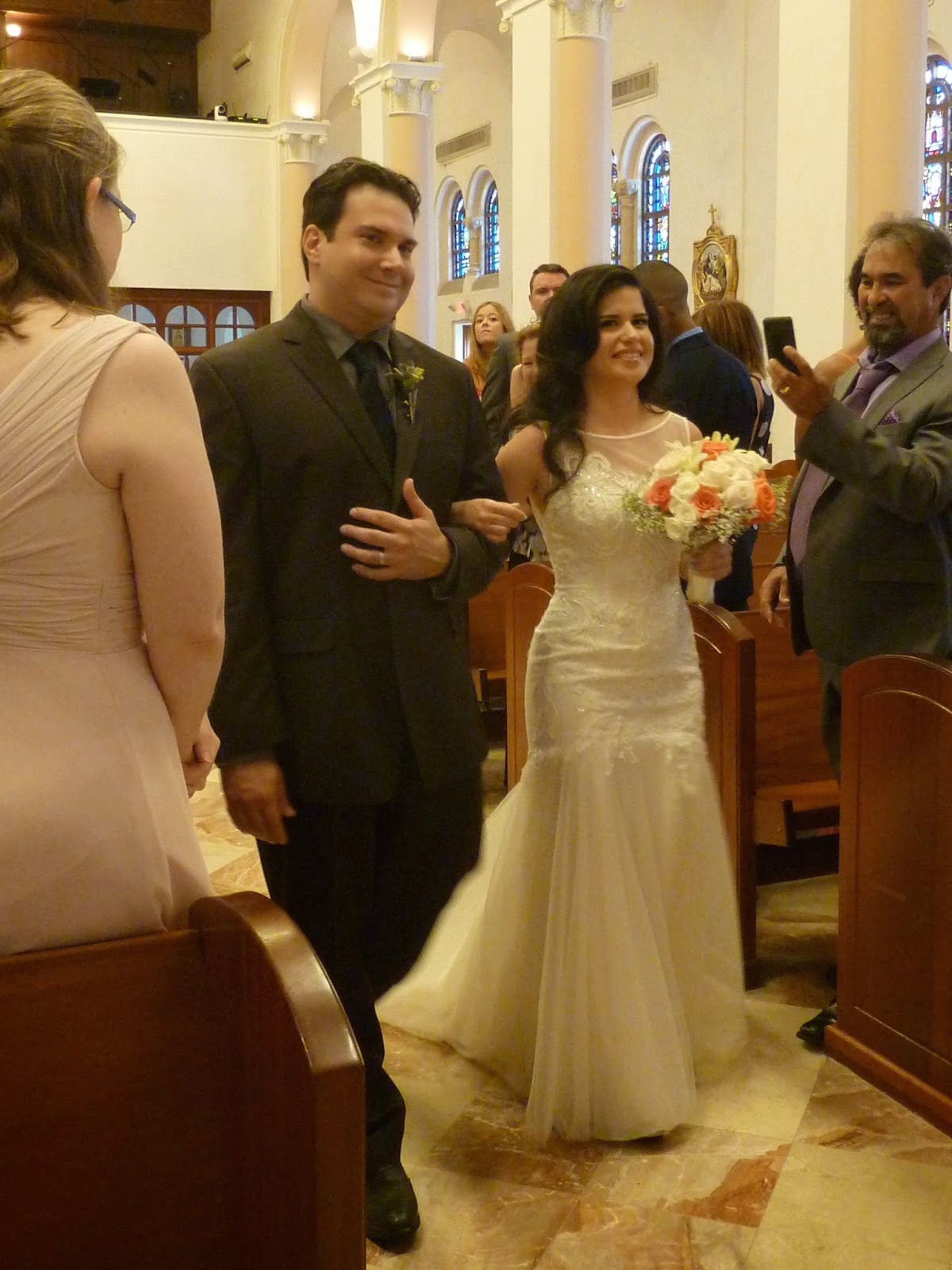 My new sister-in-law was escorted by her brother while her father watched from Heaven. 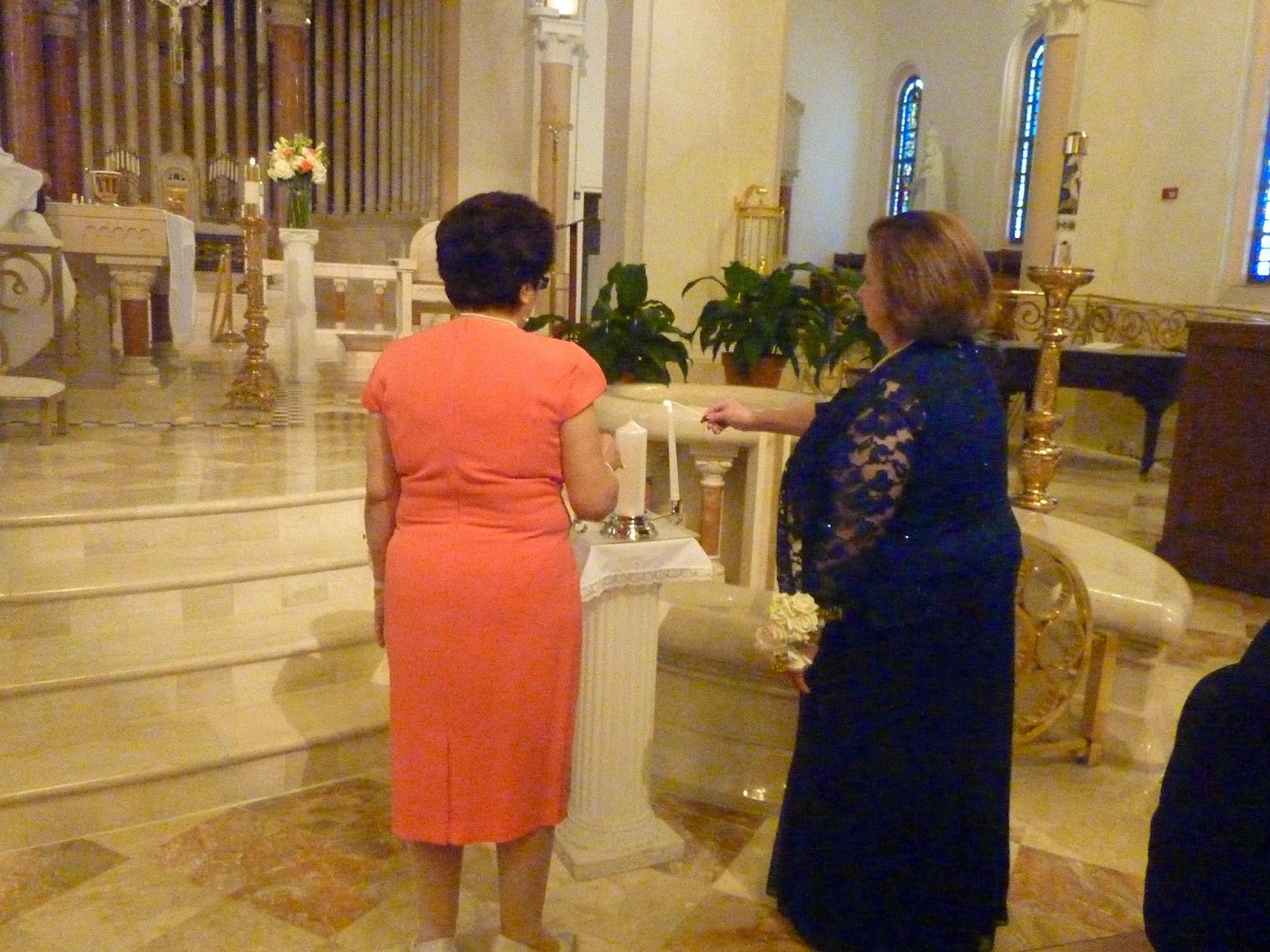 My new sister-in-law's mother and mine lit a candle representing each side of the family and my brother and his new wife would later use to light the unity candle in the middle. 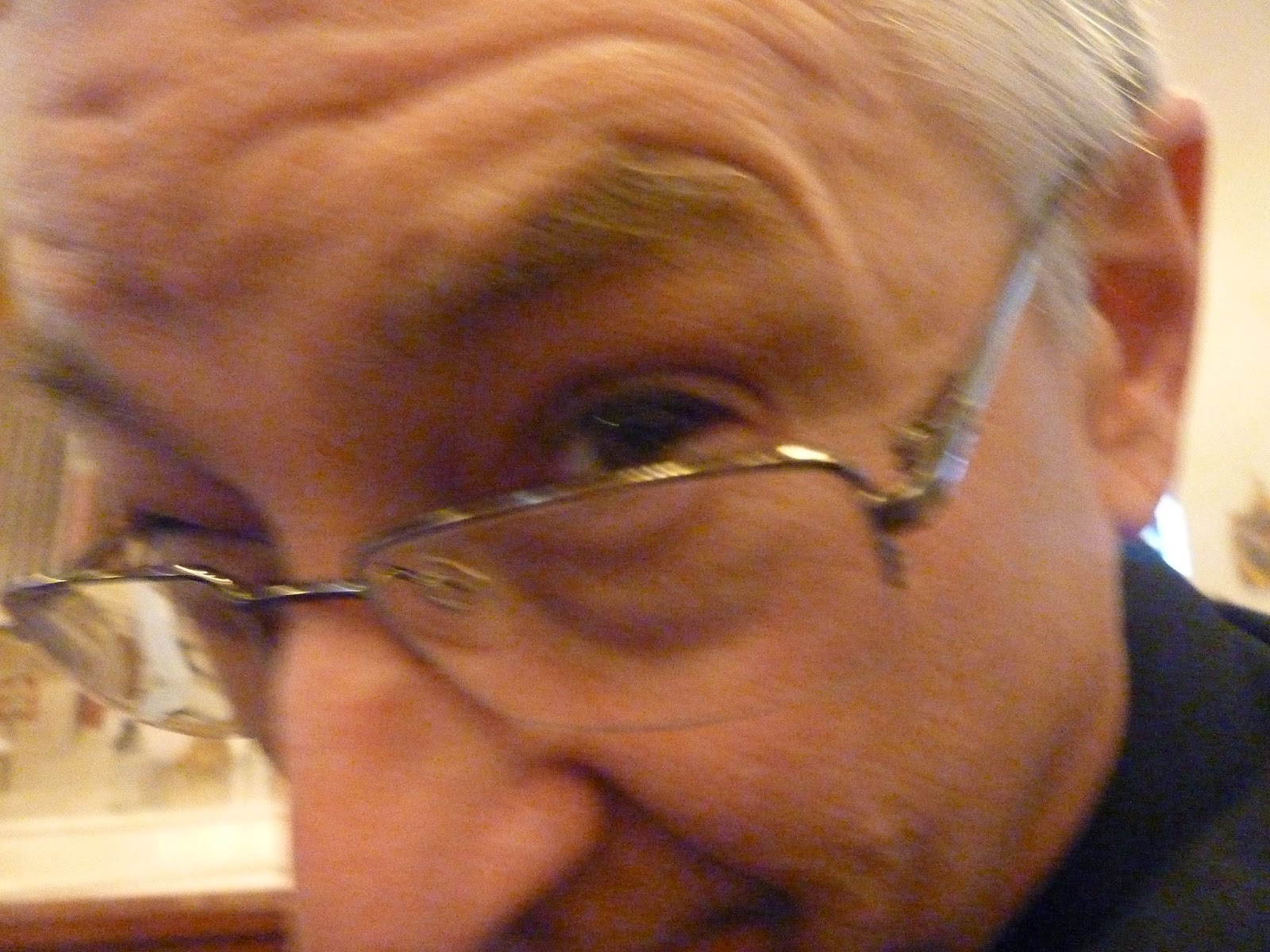 After I read the second reading and we got to the homily, Teresa, James and Brigid made it back into the pew, but Teresa still wasn't buying this Church on Saturday stuff and the only way she would stay calm and quiet was if I let her play with my camera. Most of her shots were not worth keeping, but this one is a keeper. My dad turned around to tease her with a look but she didn't let him get away without preserving it. Priceless. Gotta love that kid. 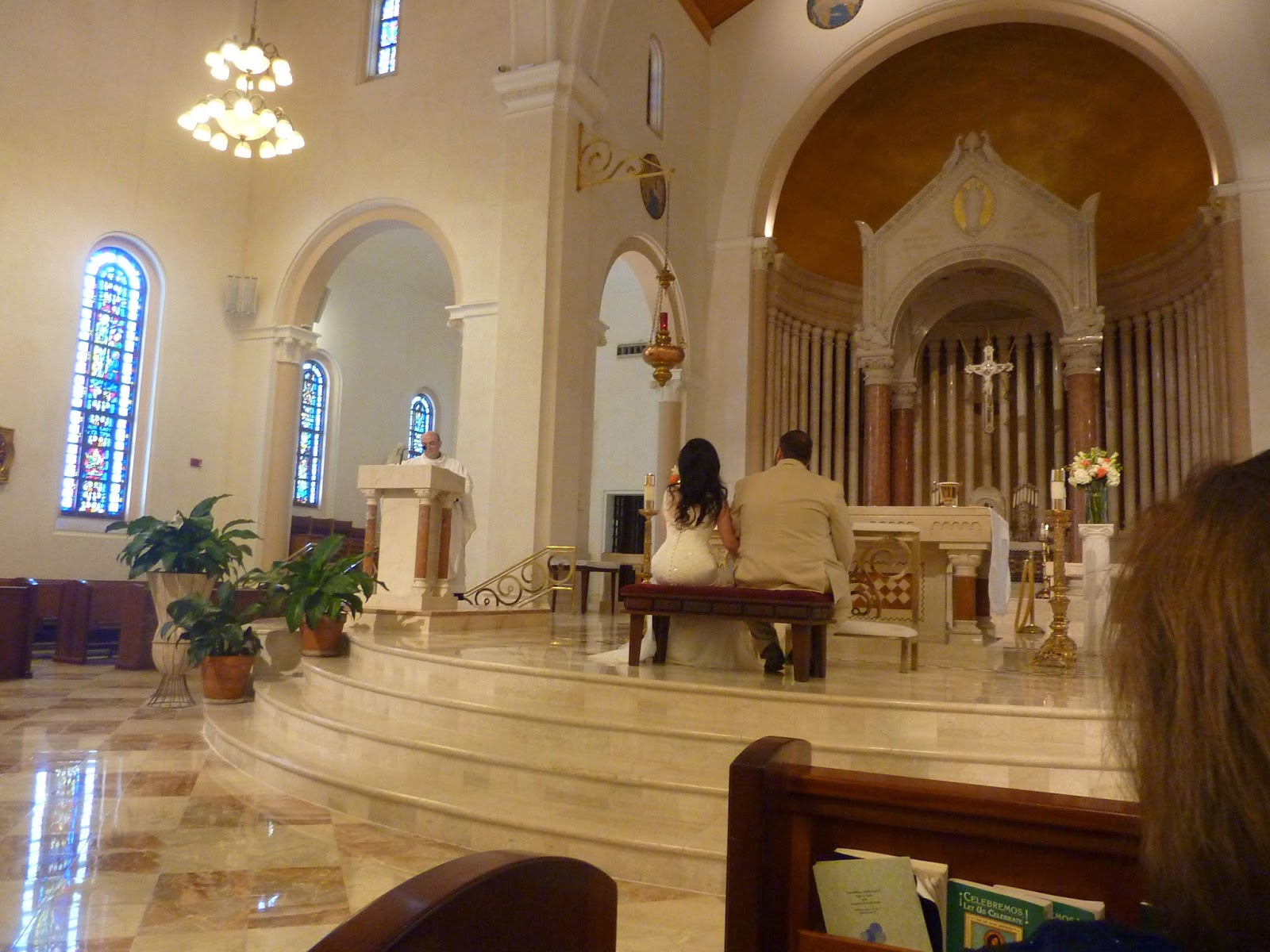 The Mass was celebrated by a Carmelite my brother knew from high school. 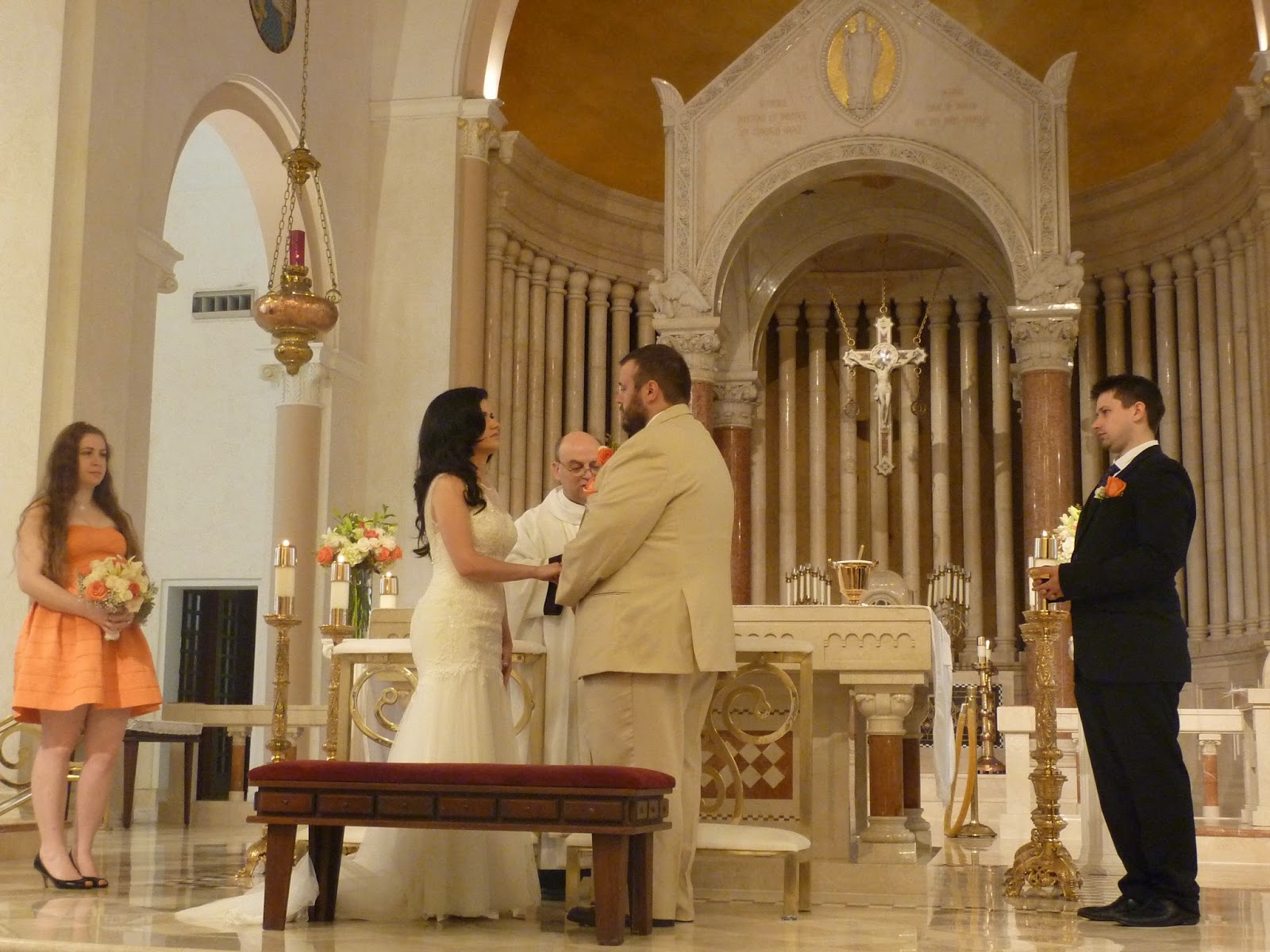 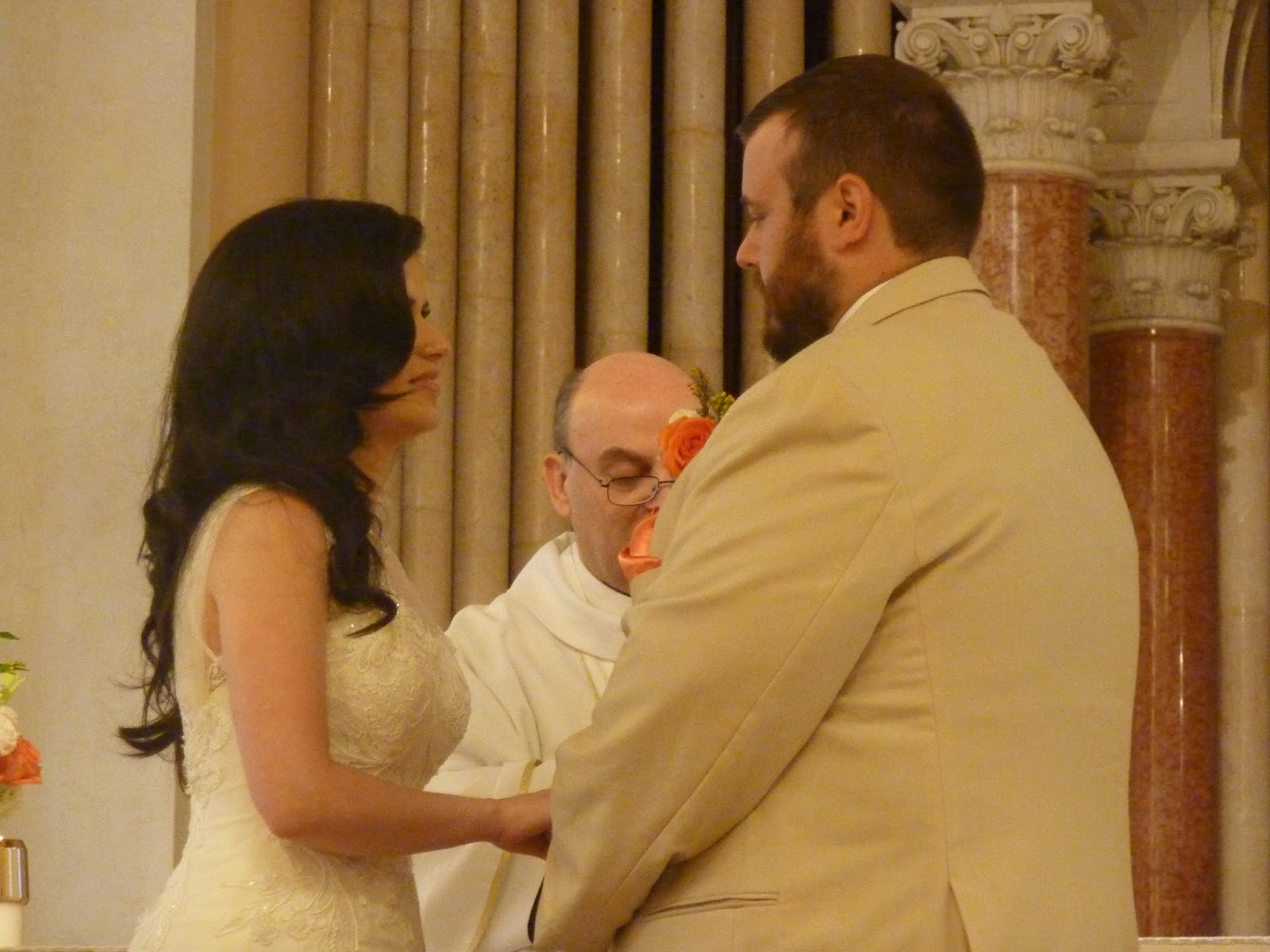 It was a beautiful wedding and in the end the girls were quite good. No one fell in the baptismal font or drew the attention of everyone present except when they were supposed to. After the Prayer of the Faithful, Felicity and Elizabeth brought up the gifts, escorted by me because, well, they are 6 and 4 carrying glass, so, yeah. Cecilia did her best to try to film us since I obviously couldn't take pictures.

Afterwards we went to a nearby restaurant for the reception. My brother and his wife were very daring in seating our crew, which took up a whole table, next to the wedding cake. It was the first thing Teresa spotted. 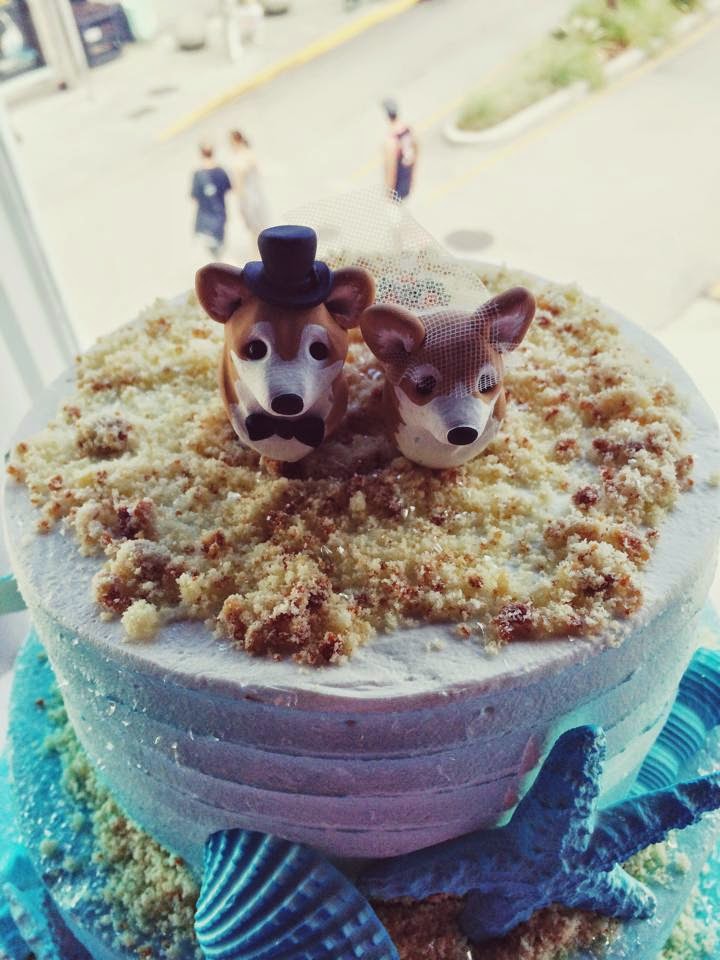 It was blue with seashells and starfish and with a Mr. and Mrs. Corgi on top (they have a corgi named after Samwise Gamgee). The kids were actually very good at the restaurant and behaved for about 3 hours but around 3:15 or so, we had to exit, before the cutting of the cake. Brigid hadn't napped all day and she began pushing in our chairs and handing me the diaper bag. That girl was ready to go. So we went back to the hotel to try to get her some semblance of a nap. James hung out with Teresa and Brigid while I took the older three back to the pool and chatted with some extended family who had been at the wedding.

Sunday we drove an hour north to our old parish before we moved from Florida and went to Mass there. I found it particularly fitting that Trinity Sunday fell on Father's Day and, while we did cards and gifts for James and my dad the weekend before (I told them I wasn't bringing their gifts to Florida), we did eat out afterwards at a favorite restaurant, J. Alexander's.

Then we began driving north, but not back to Maryland yet.... you simply don't drive 5 kids 1100 miles for 16 hours only to turn around and do it again. You have to give them some place to play and have fun before strapping them in for that long again. But that is another post. :) 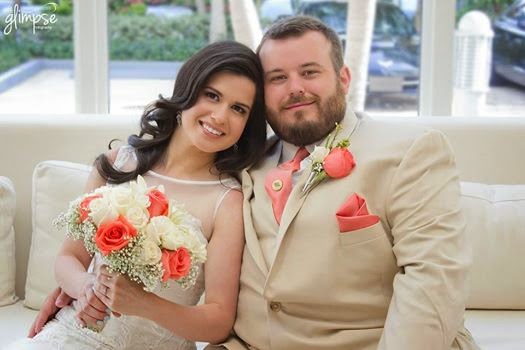 Congratulations to my brother and his beautiful wife!

Posted by Katherine at 2:32 PM