Well, perhaps we drove more northwest in the end but we decided to pay the new Florida LegoLand a visit. We'd never been before, but have multiple Lego fans. 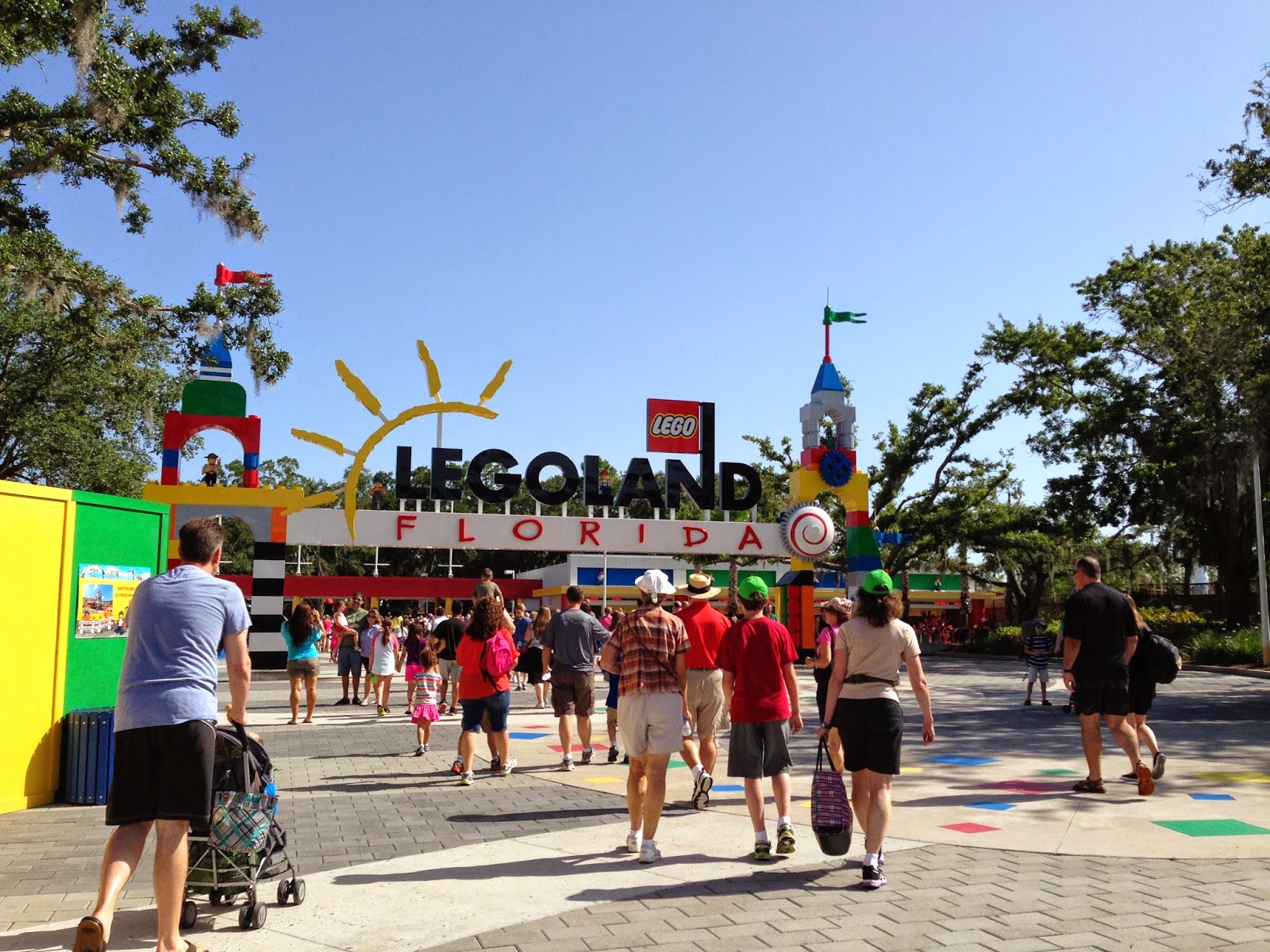 They have a double decker carousel. The girls couldn't resist it once they saw it. 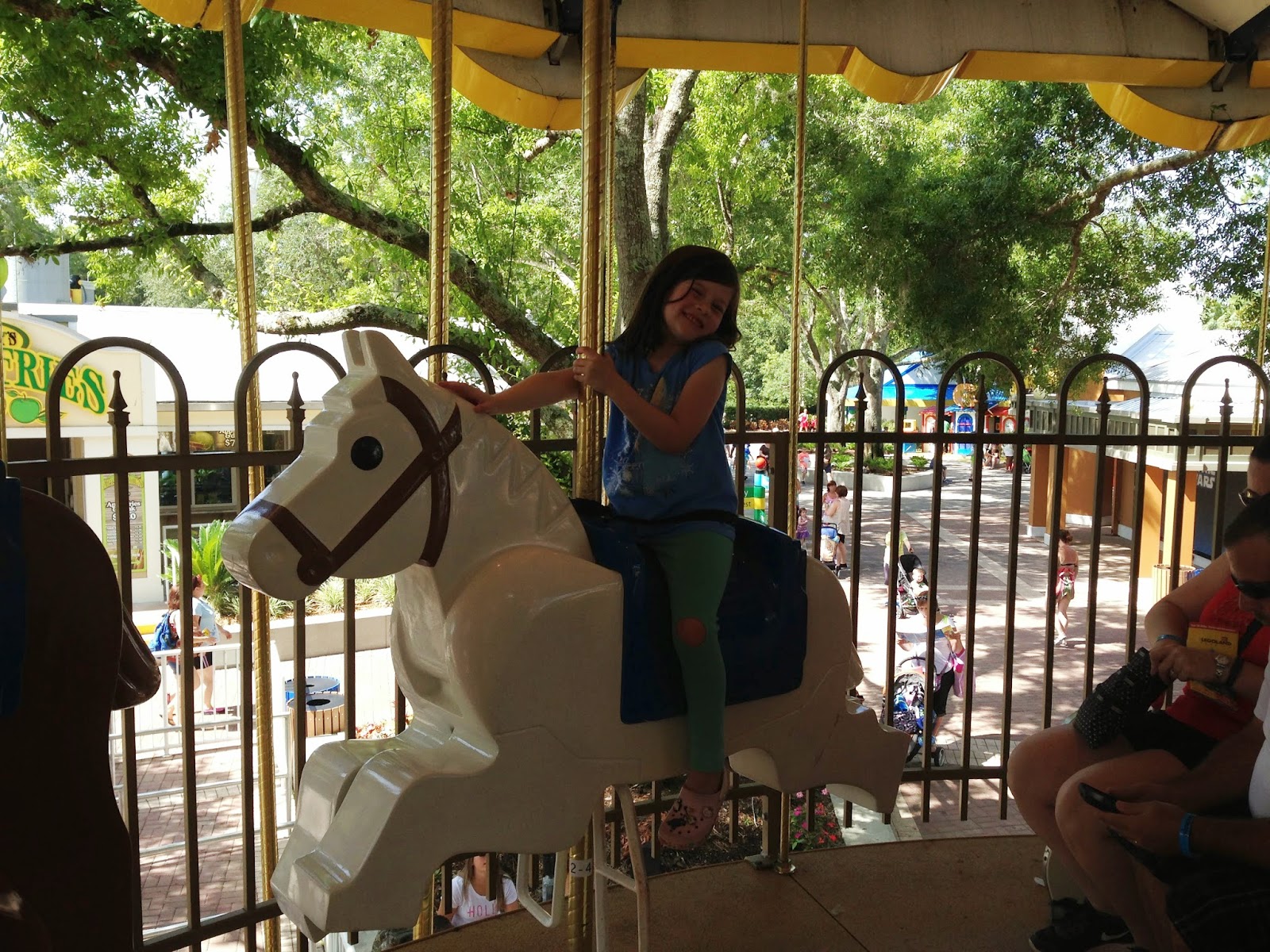 Felicity rode on the upper tier. 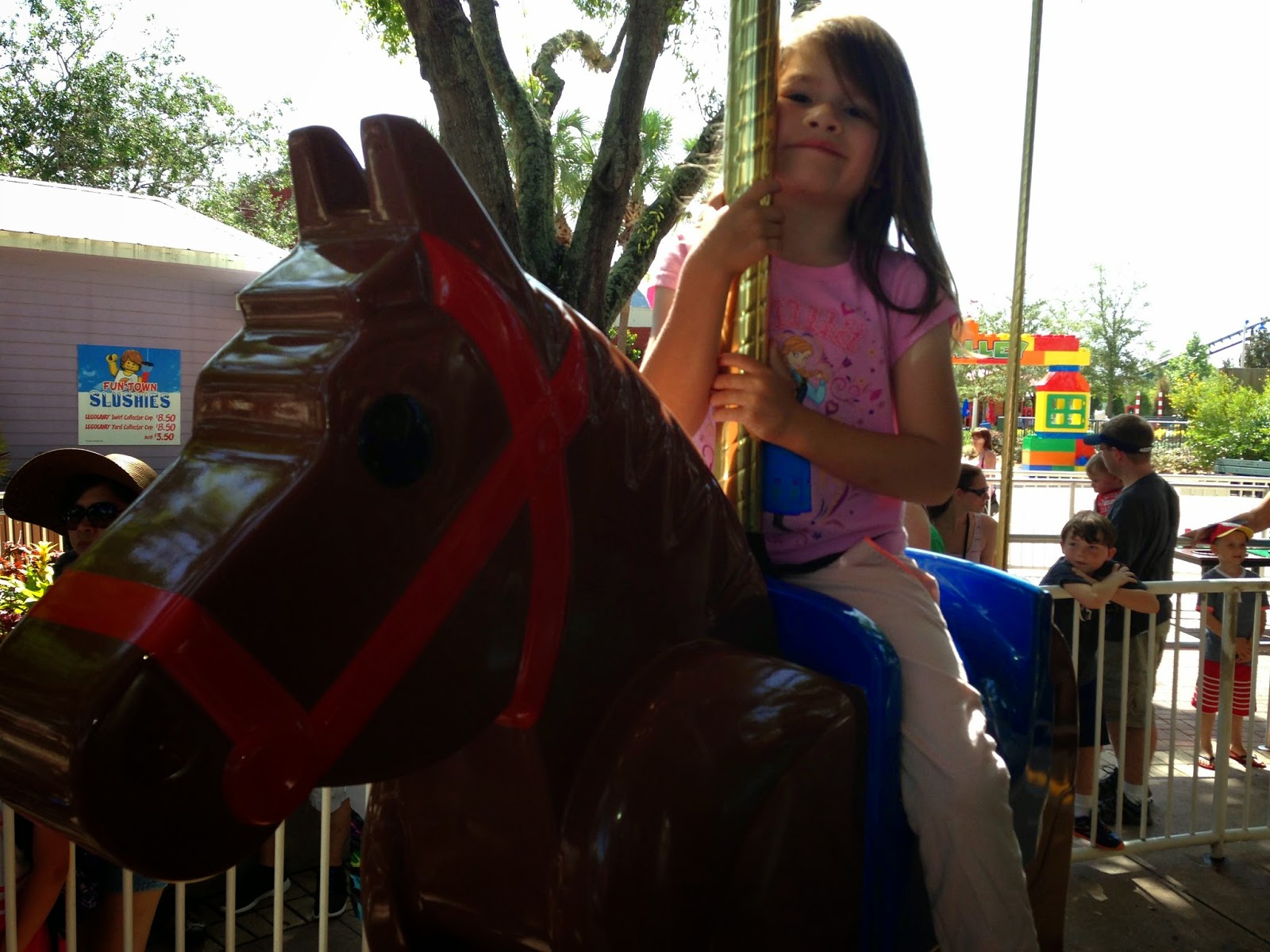 And Elizabeth rode on the lower tier. Cecilia isn't too fond of carousels as she can get motion sick. She is, so far, our only child who can get car sick but she also has the most sensitive stomach in the house so generally things that go in circles aren't her preference.

We went to Duplo Villiage/Valley (it varied between the actual location and the map - lol ... apparently a new addition). Brigid and Teresa absolutely loved it but the older ones enjoyed it as well. There is a big air conditioned barn with an indoor playground and Duplos for building. 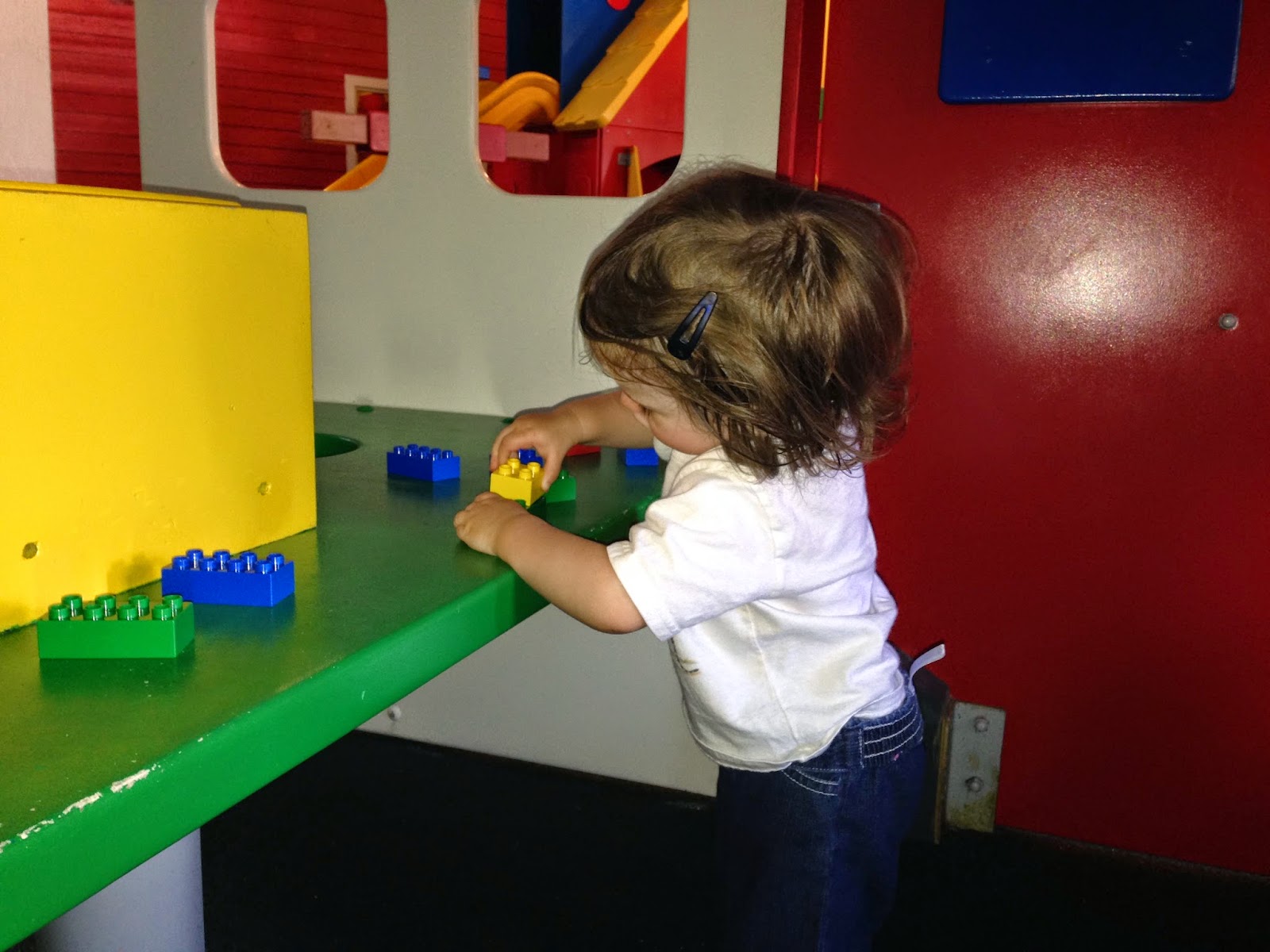 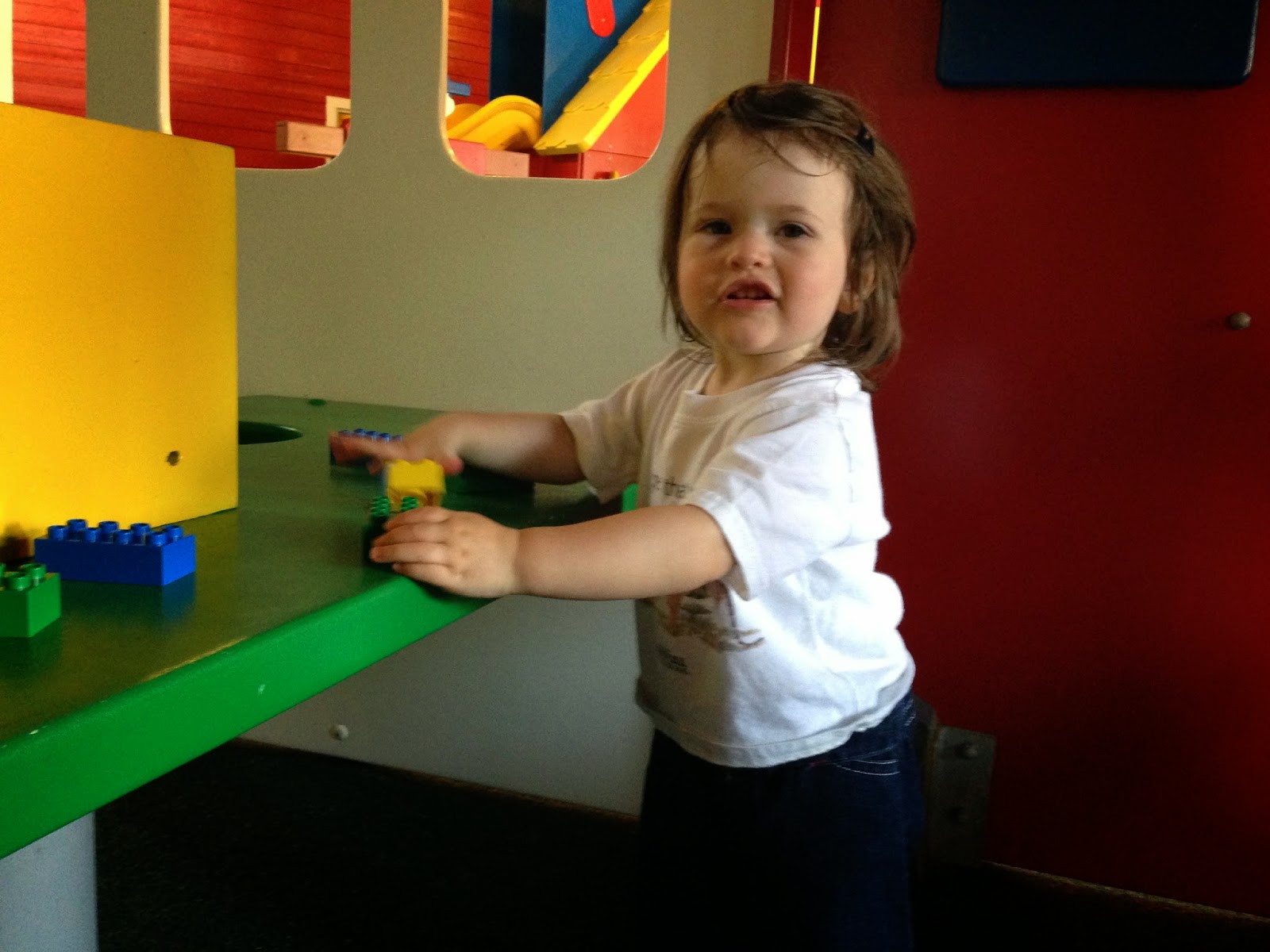 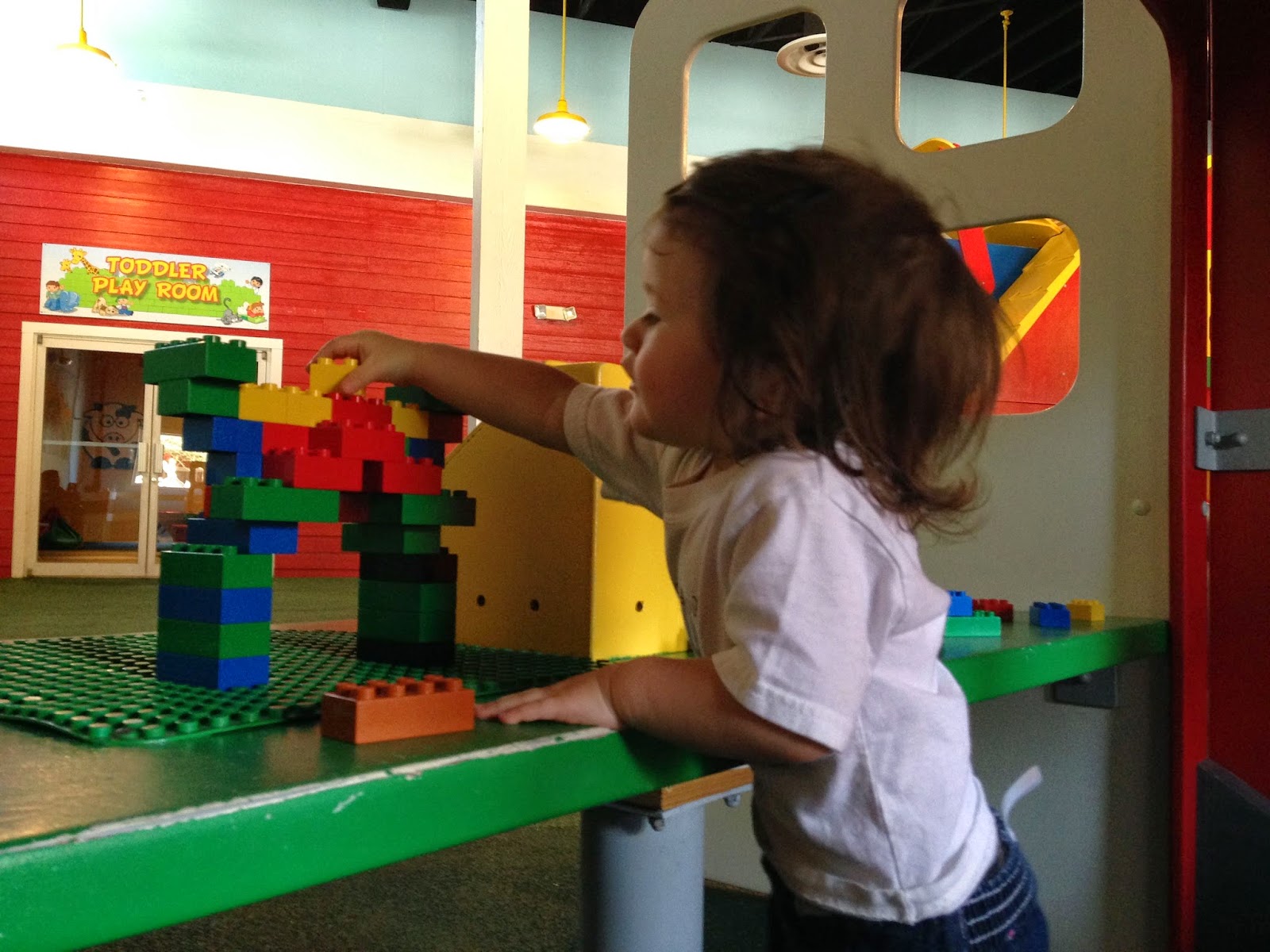 Yes, I helped, per her request, but she still was in building heaven. 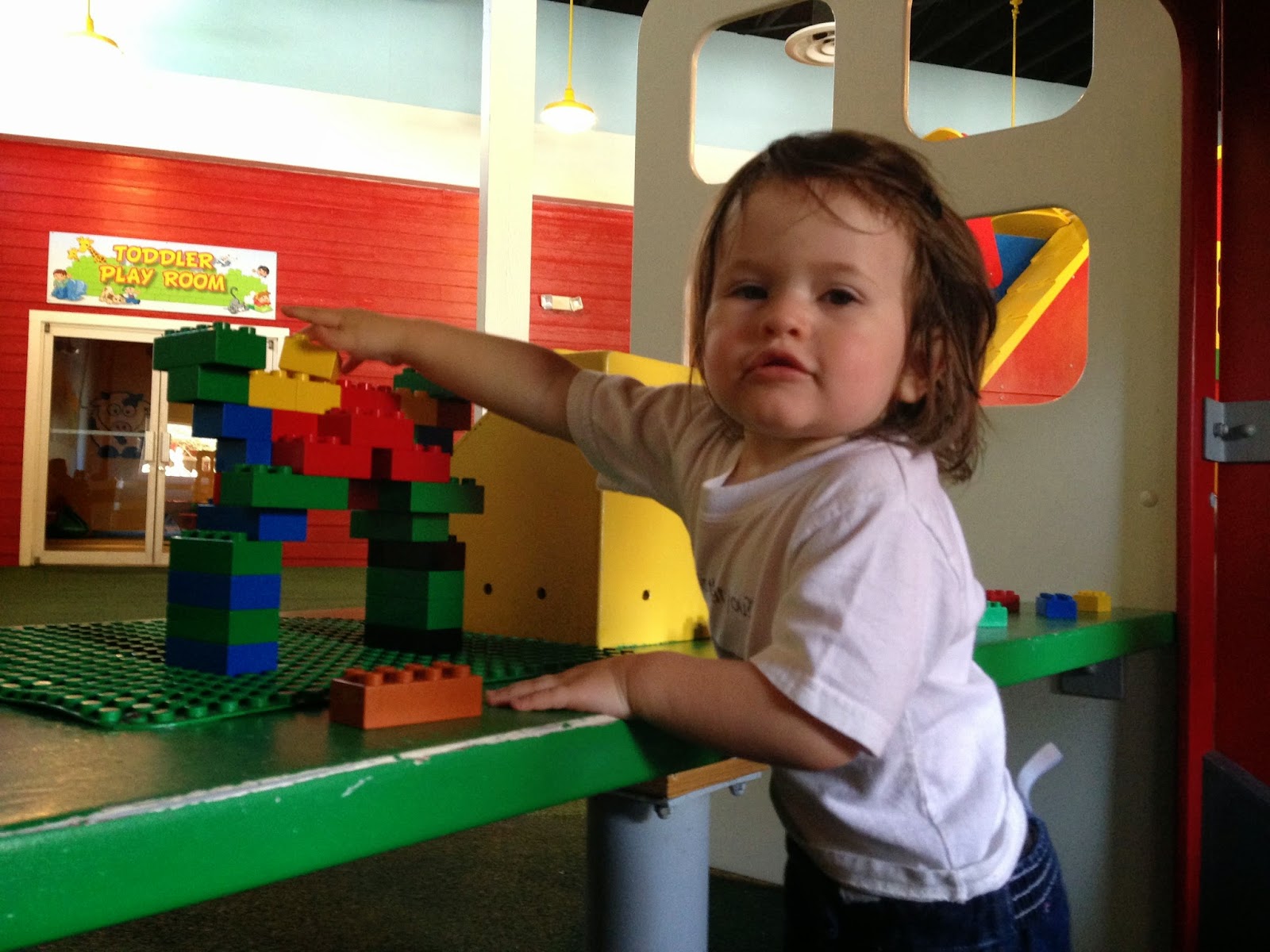 Inside the Toddler Play Room inside the barn were even bigger blocks with which to build. 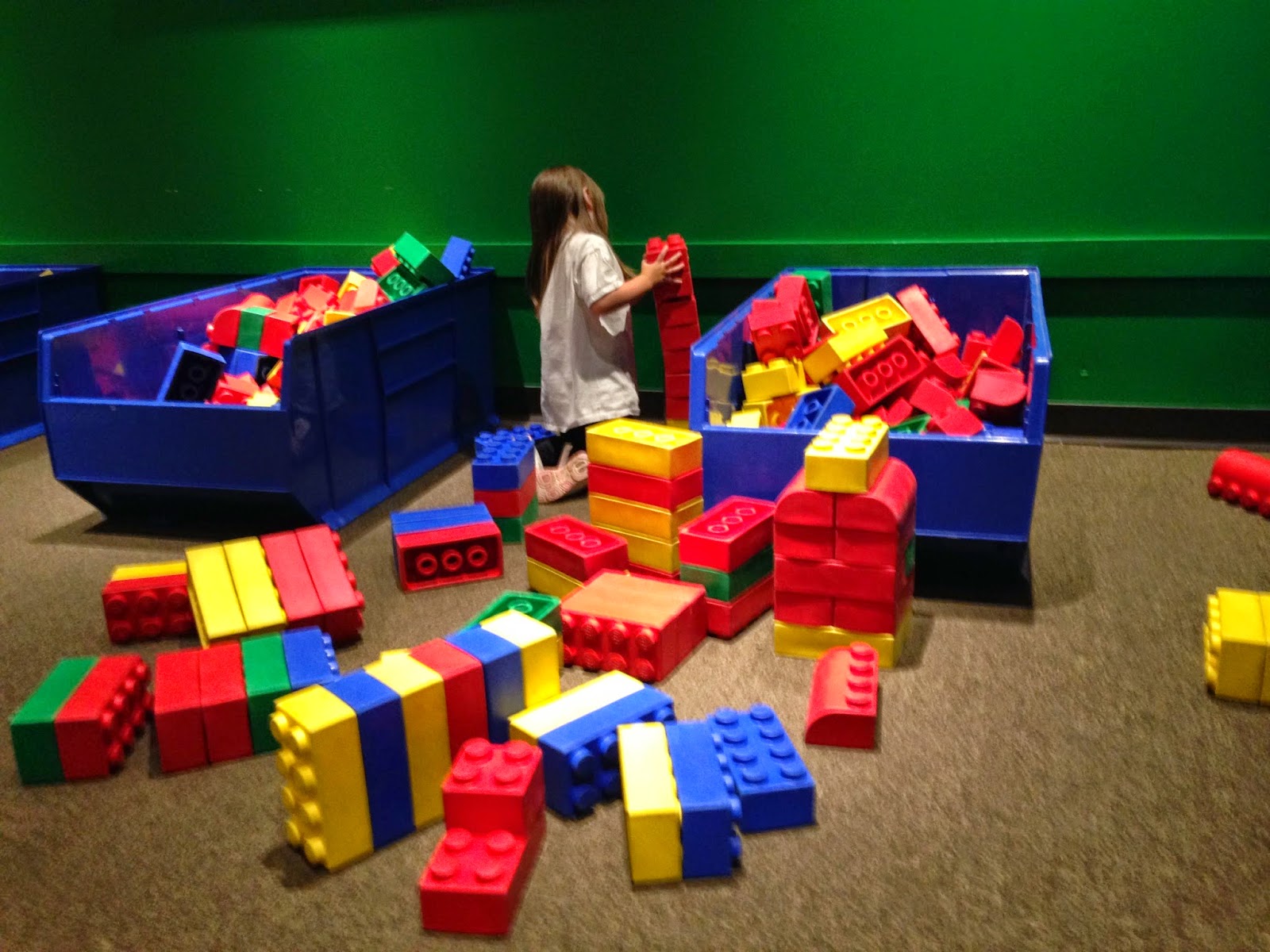 They have, throughout the park, various figures built out of legos, and lest you think they are all just one big piece of molded plastic, they post signs telling you how many pieces it took to build and how many hours. Teresa was especially amused by them. 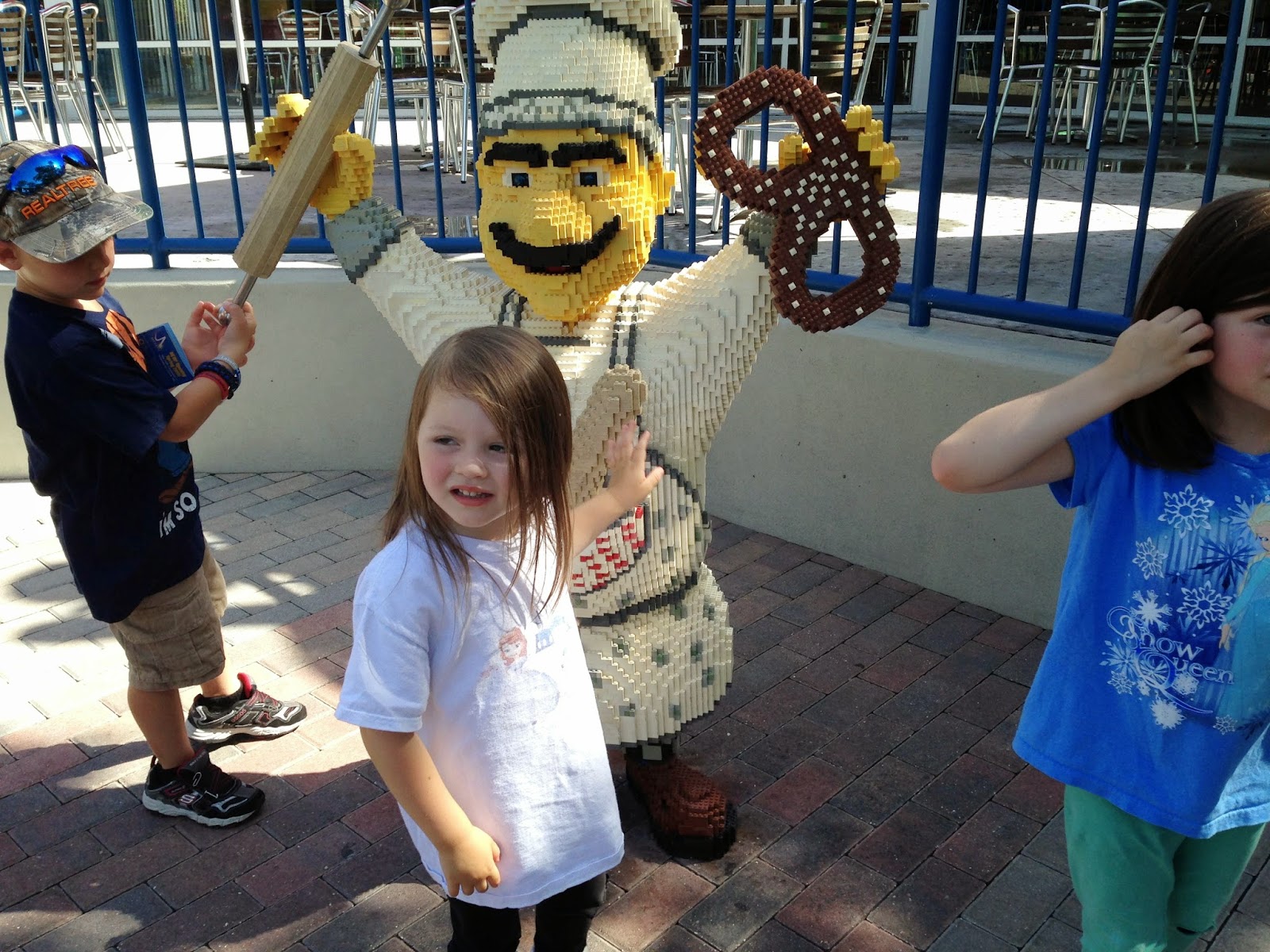 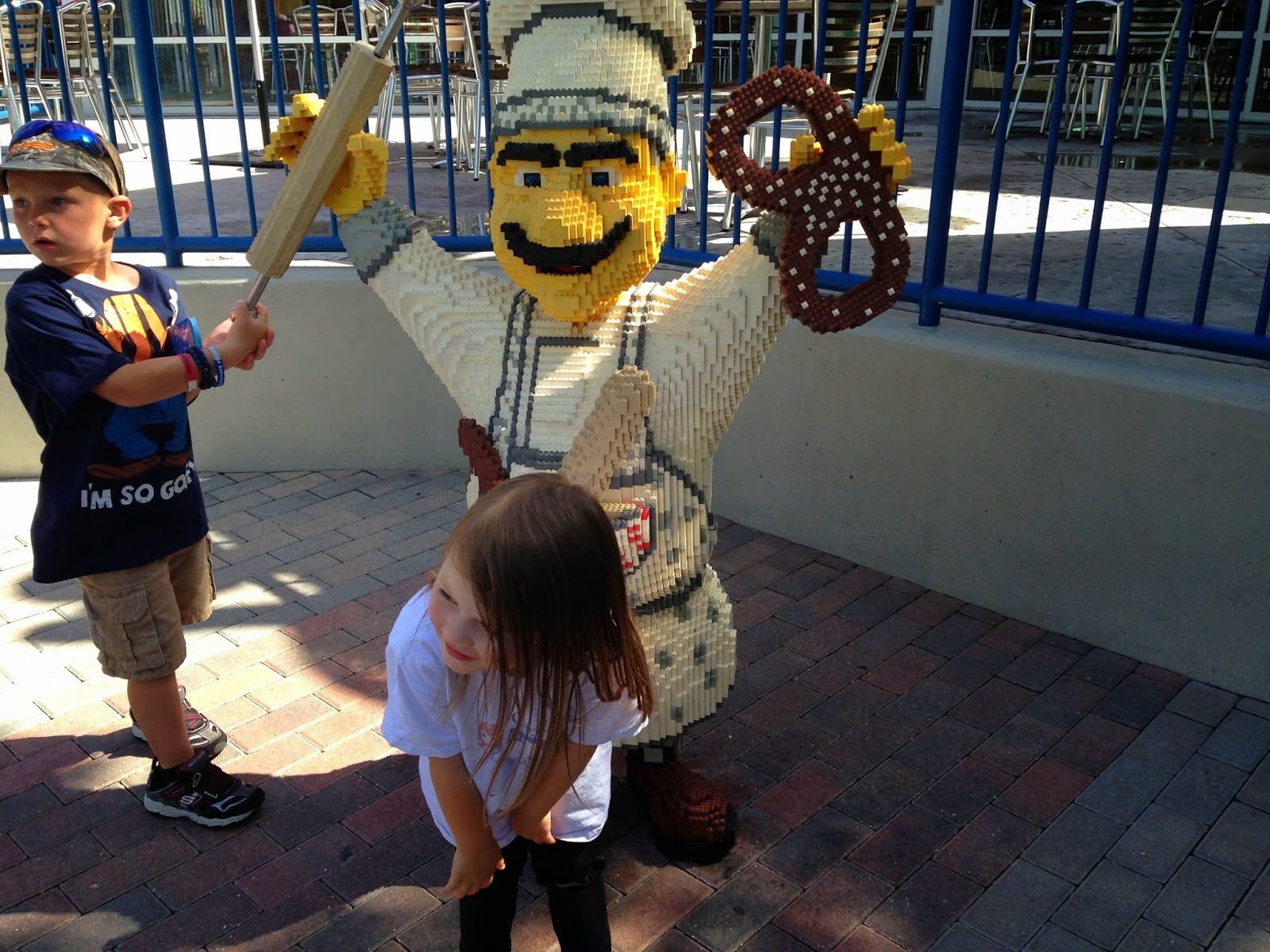 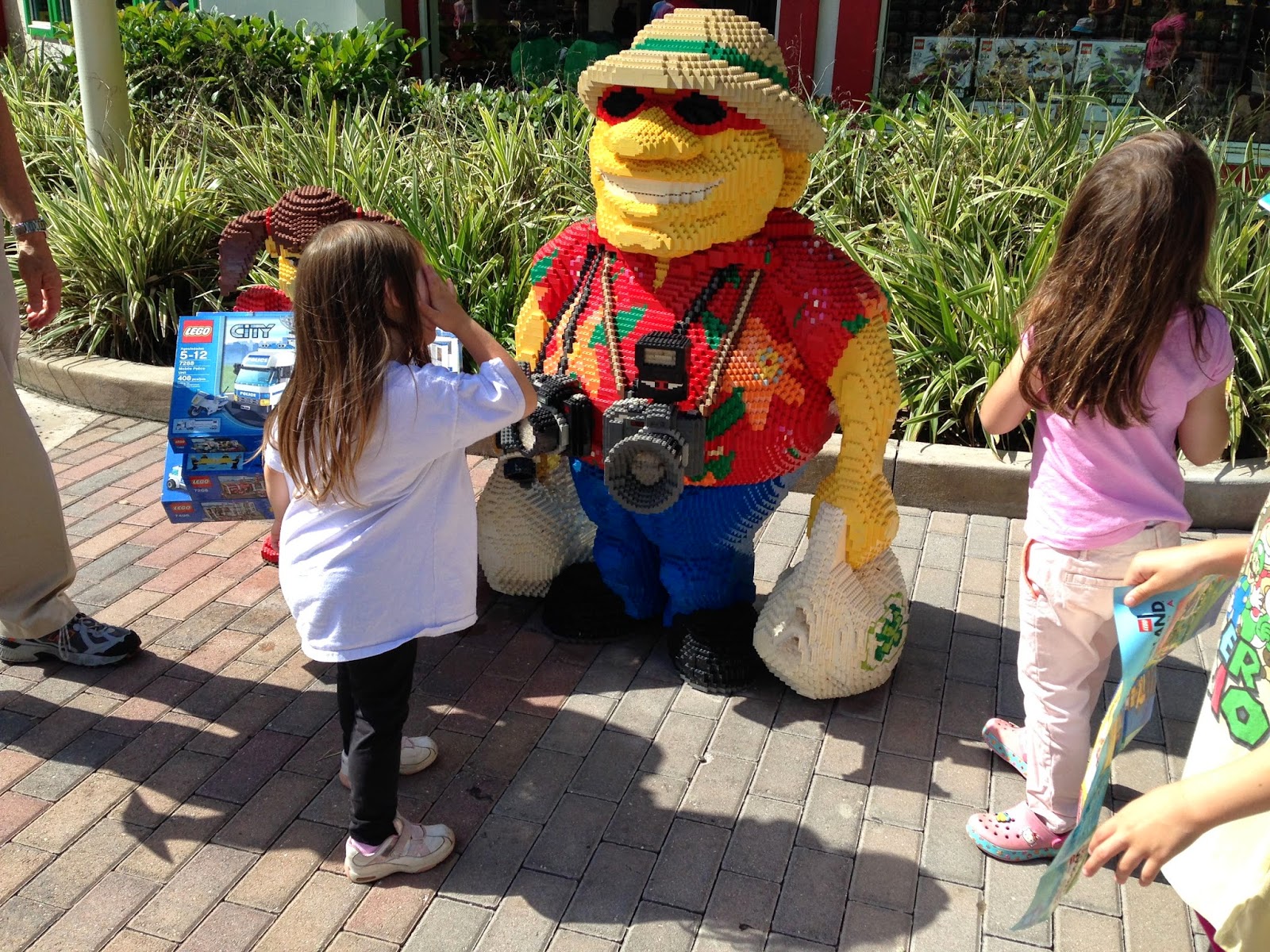 While I kept Brigid and Teresa for some extra fun in the Duplo area, James, my parents and the older girls went off to ride some rides the younger ones wouldn't be able to enjoy. 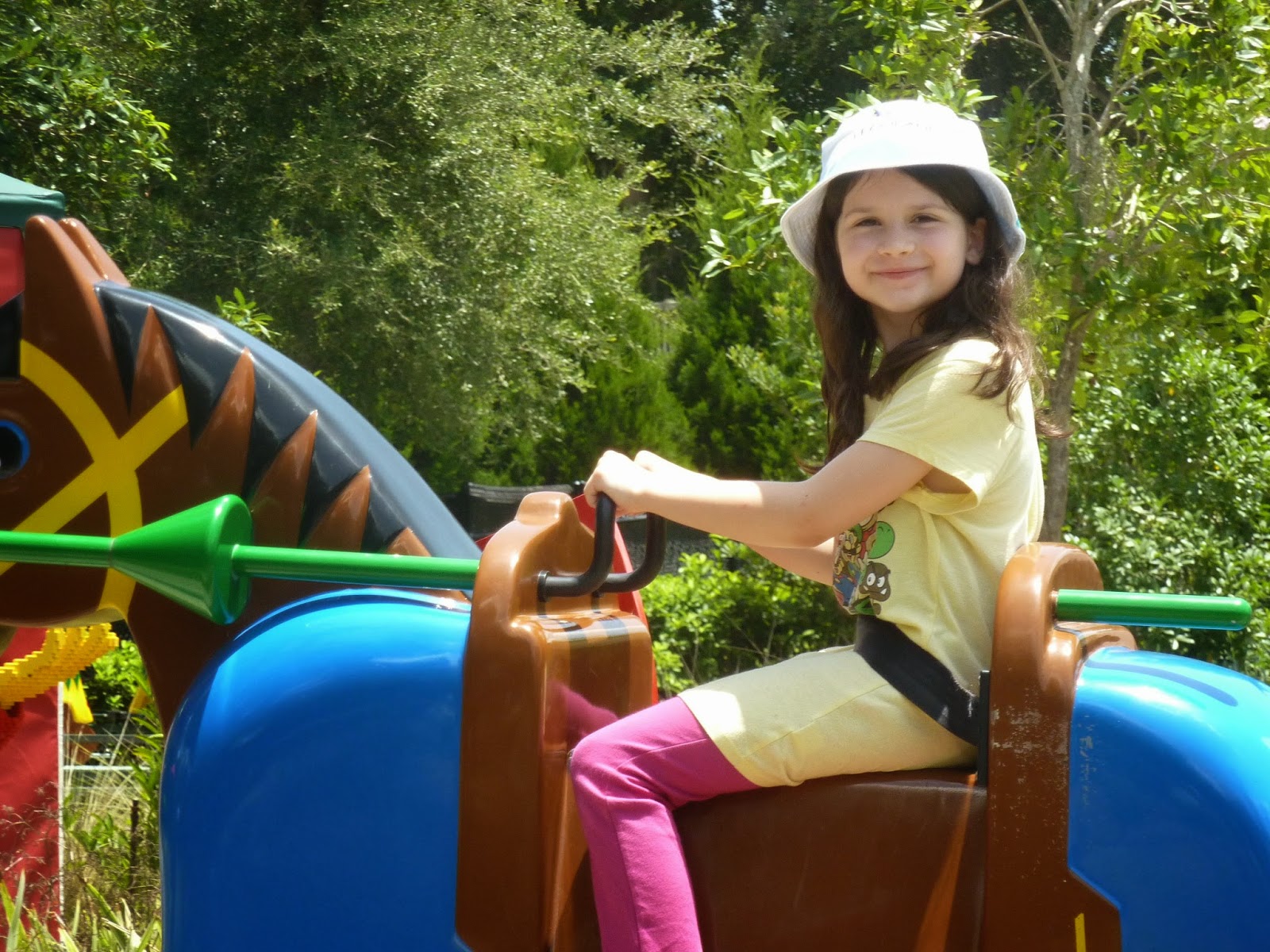 This was a particular favorite in the Kingdoms area. Jousting. 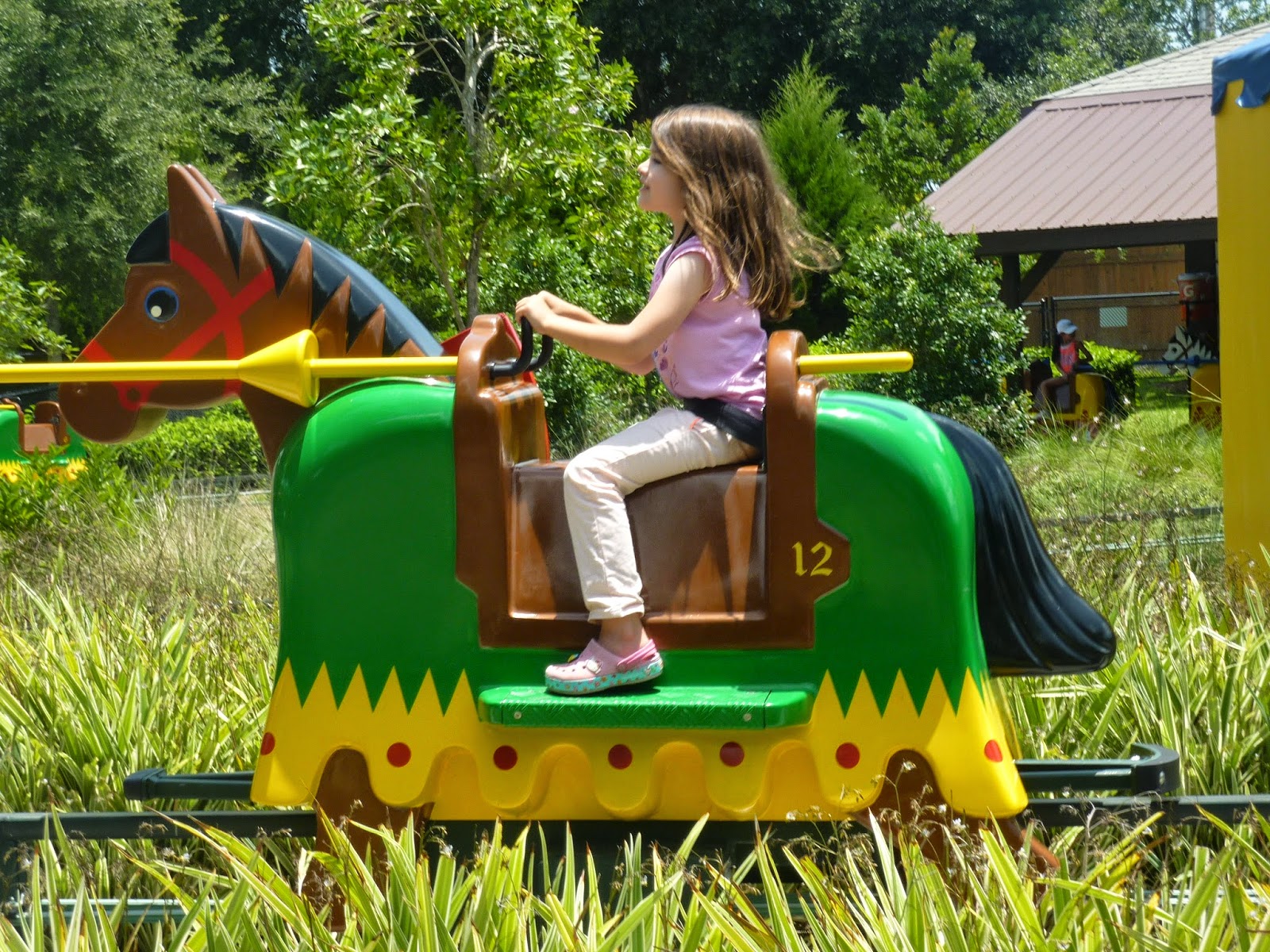 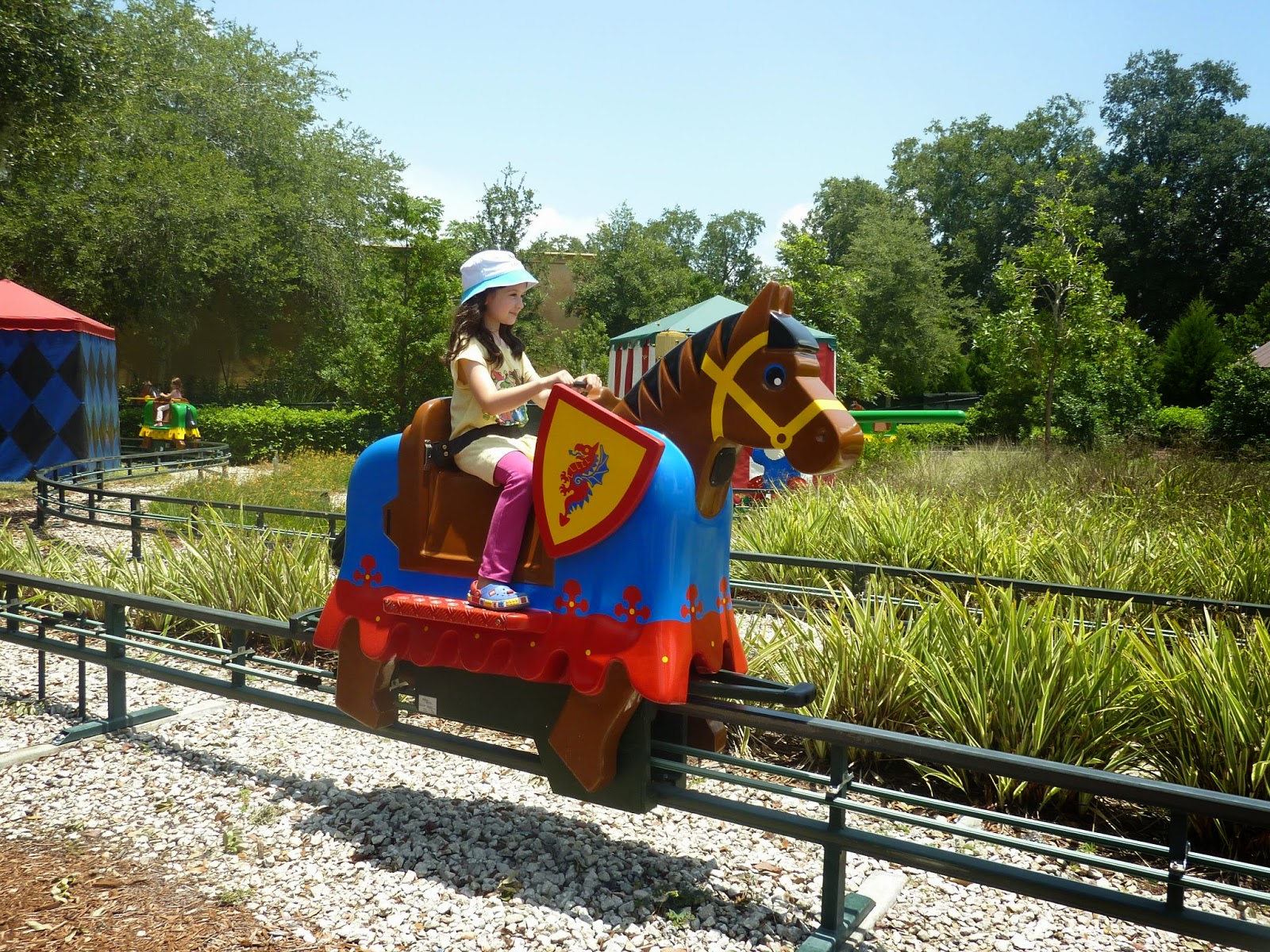 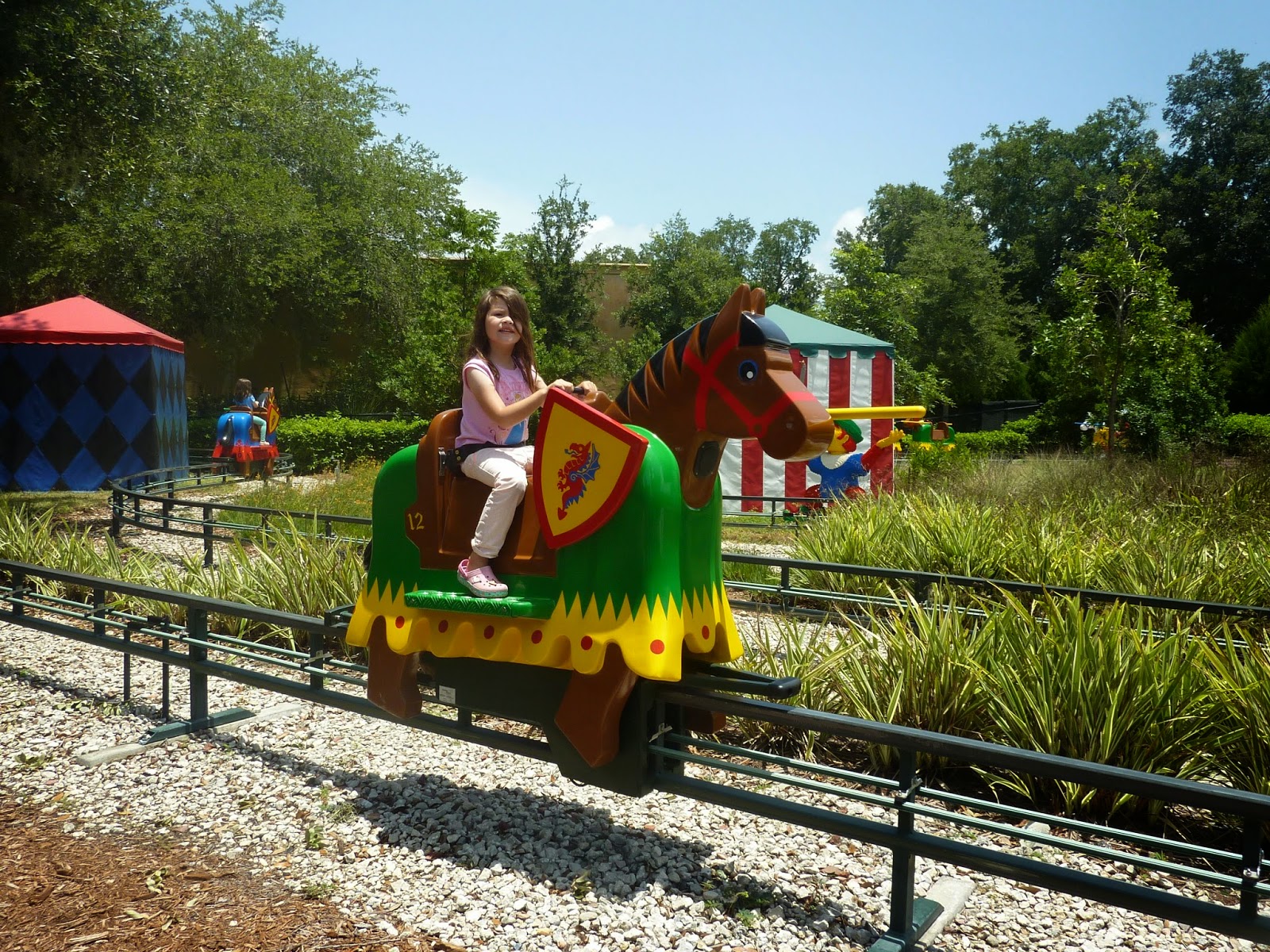 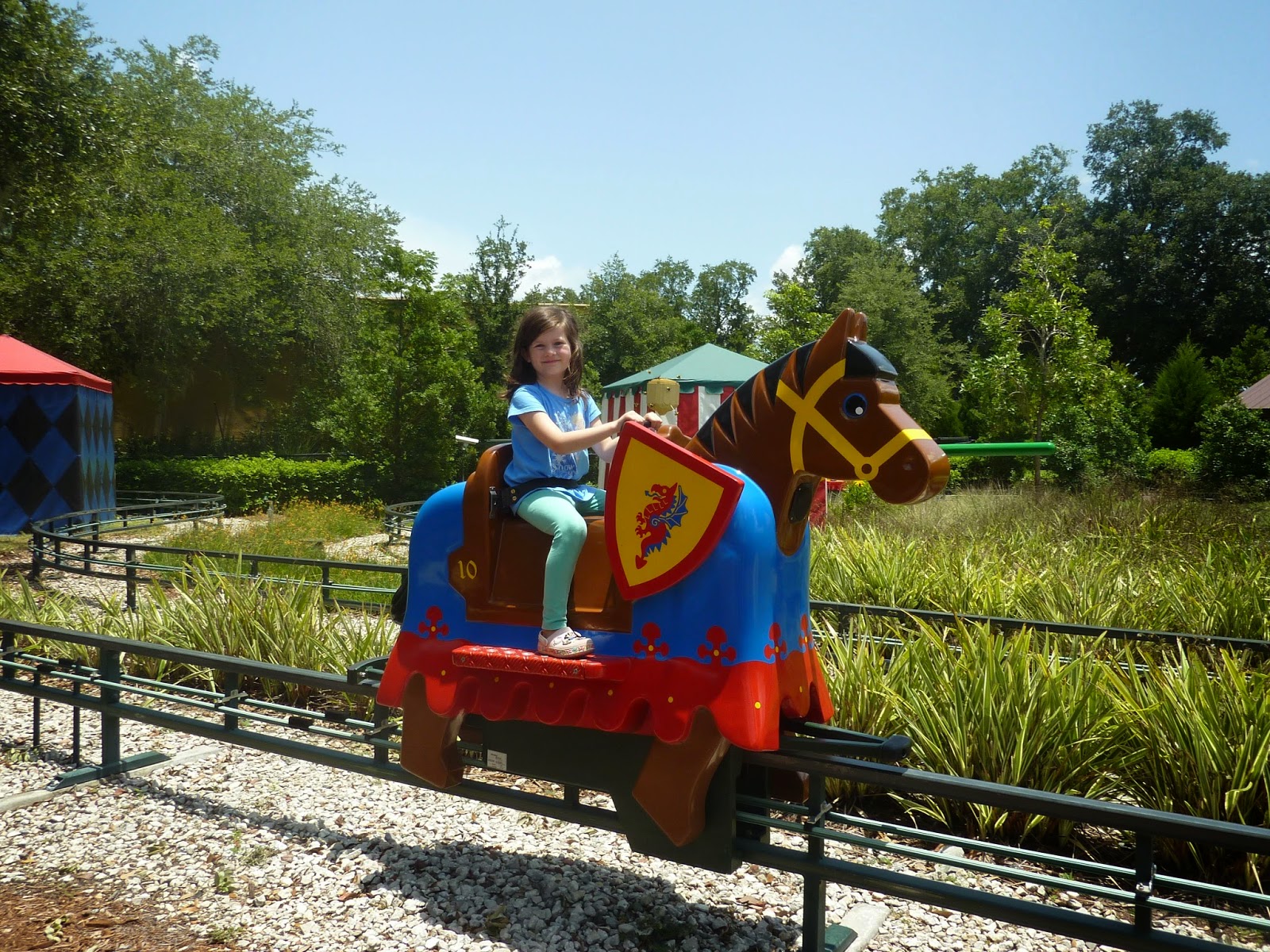 While in Duplo, we played in the spray ground and it was comical to watch Teresa run from the water spouts... the same girl that soaks through multiple outfits a day at home in the backyard. Brigid was less timid with the water than Teresa was. Go figure! 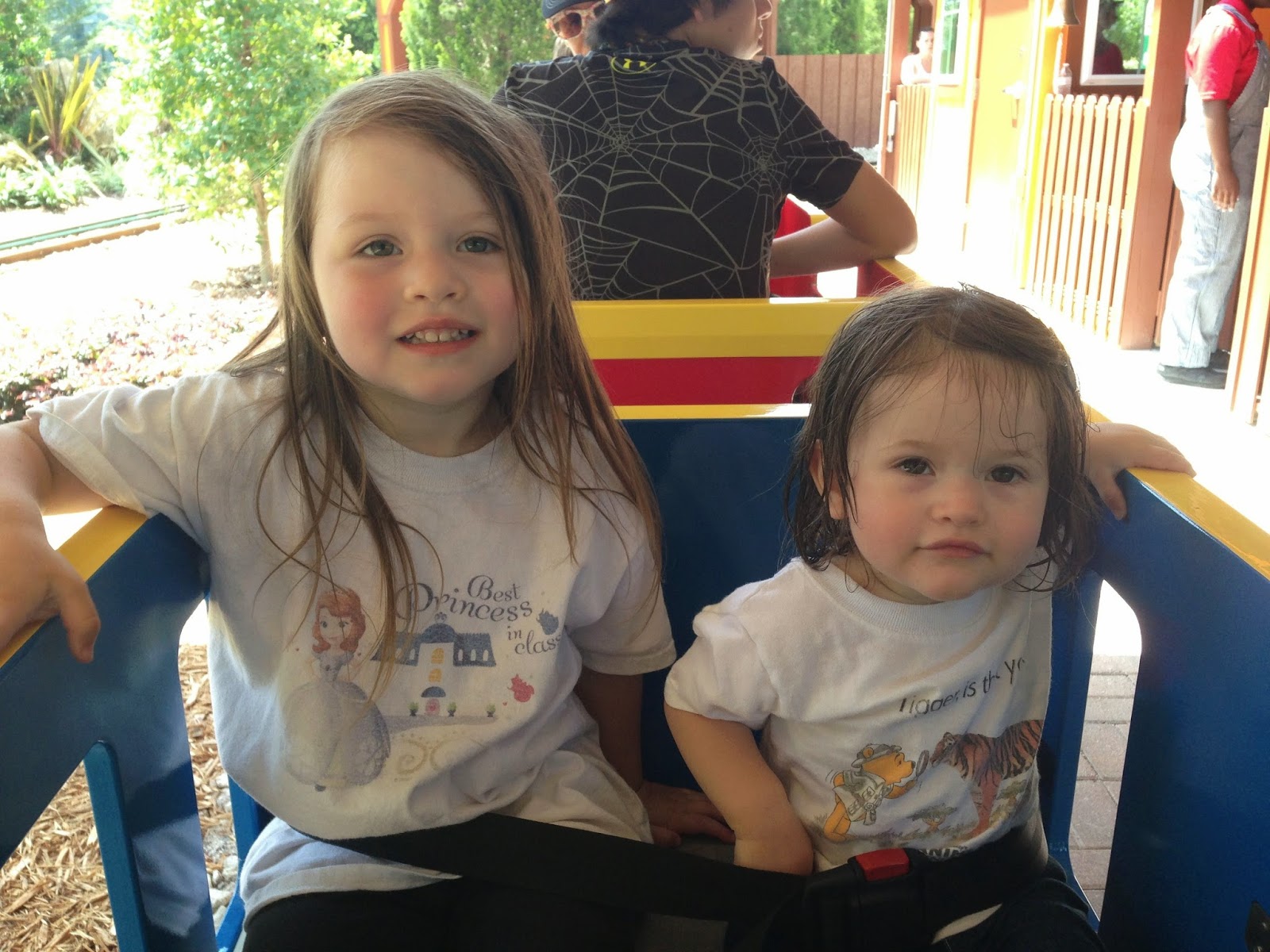 Their absolute favorite though was an adorable train ride. Both absolutely loved it. 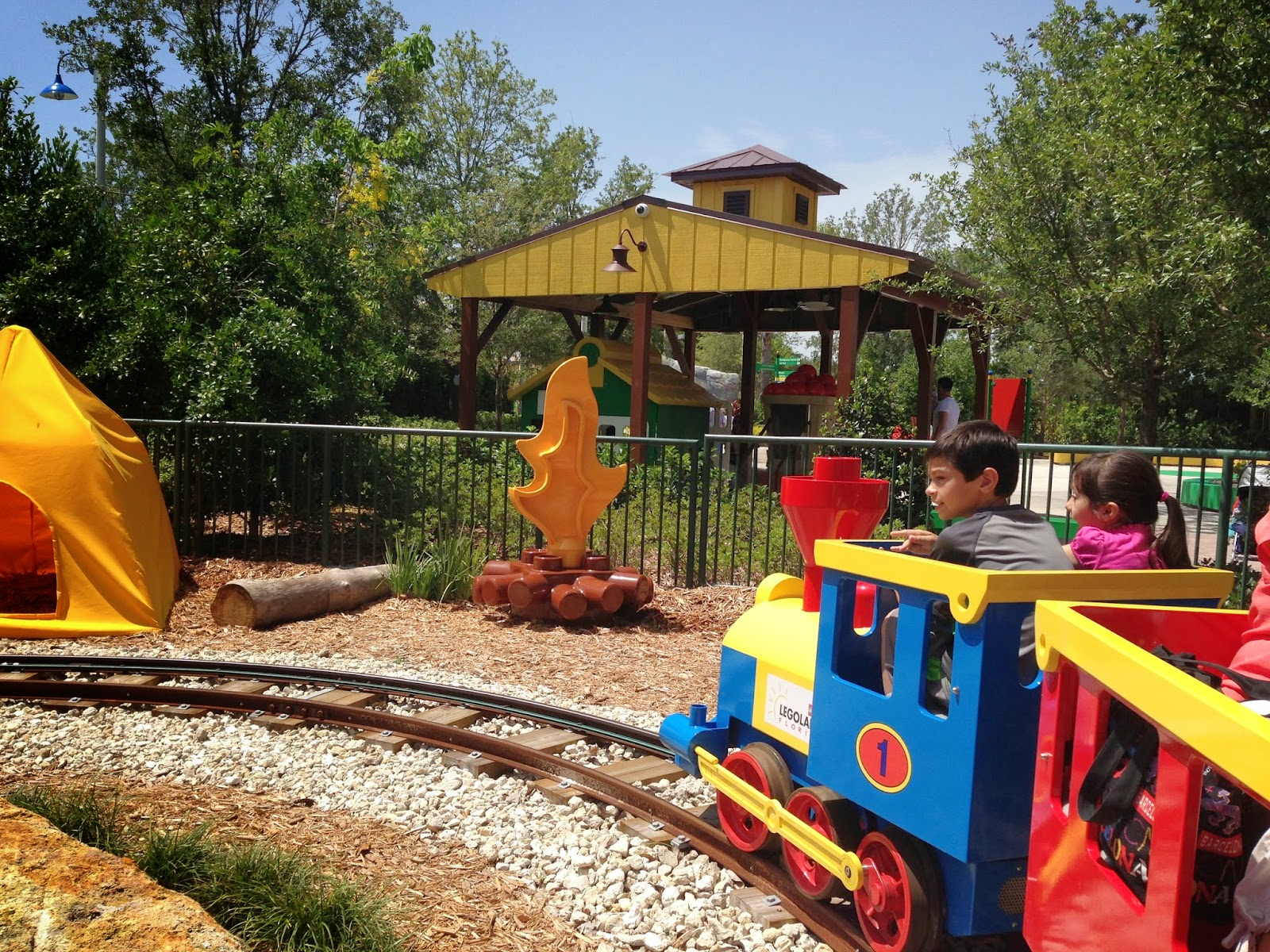 When we had to wait another round before getting on, Teresa sunk to her knees on the floor pouting saying, "My train! My train!" Yeah, the girl loves her trains. 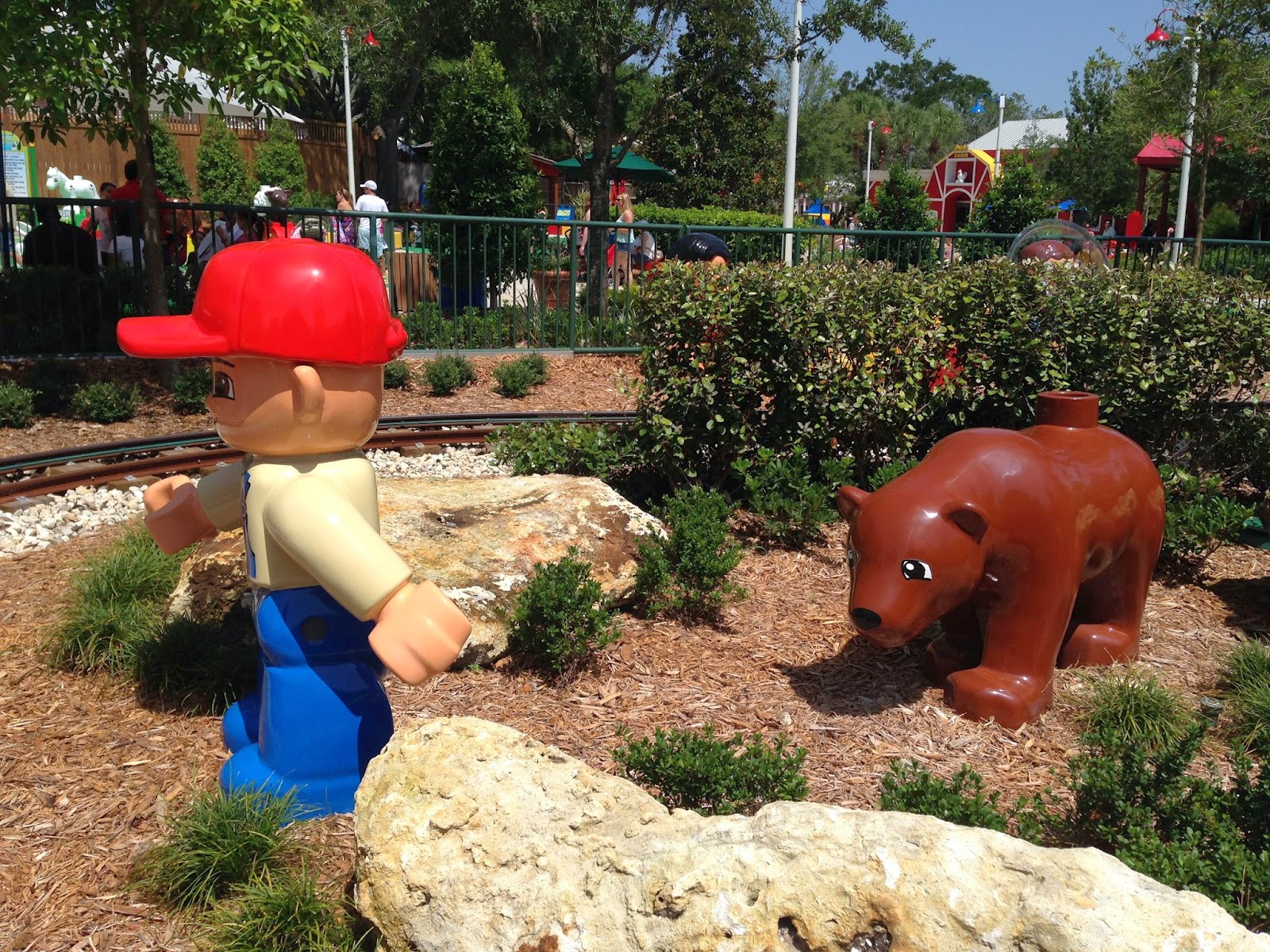 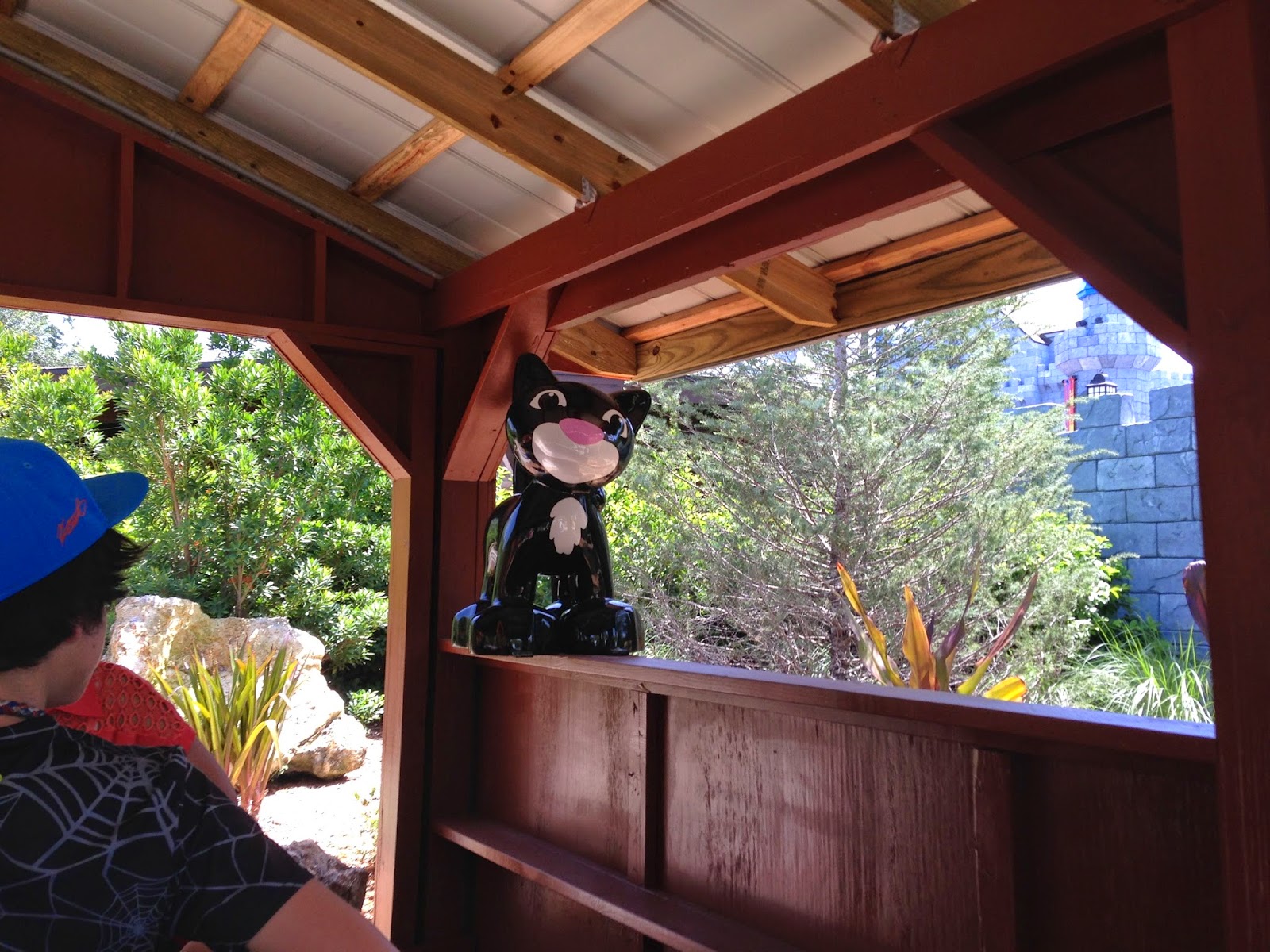 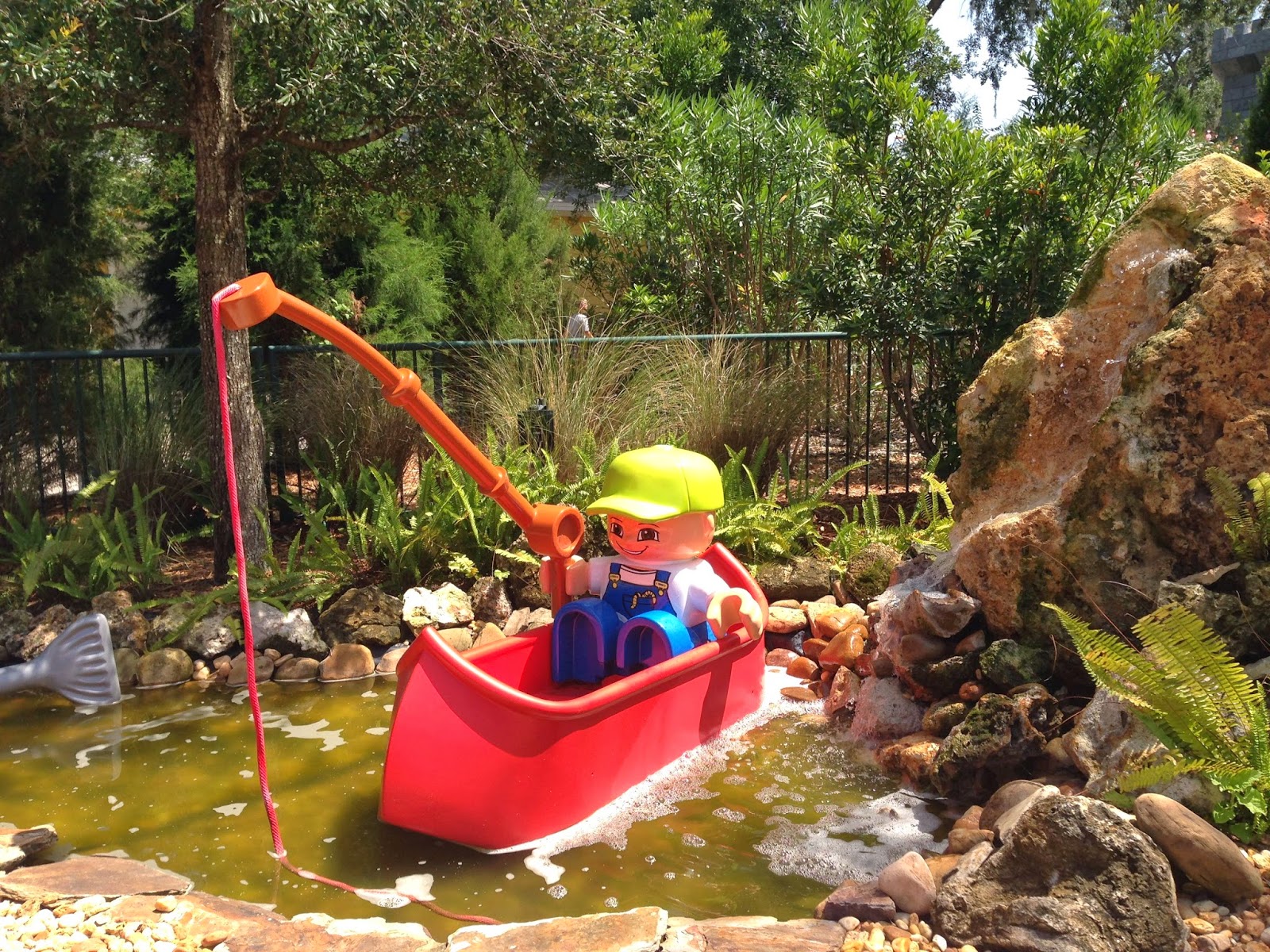 The fish spray water. It is adorable. And both girls loved it so much Brigid protested when I had to unbuckle her and I had to physically pry Teresa off the ride.


Afterwards I took them both to the tractor ride. Unfortunately Brigid was too small to be permitted on the ride and Teresa wasn't allowed to ride by herself but a kind Legoland employee offered to ride with her so she could go on it. She loved driving her tractor. 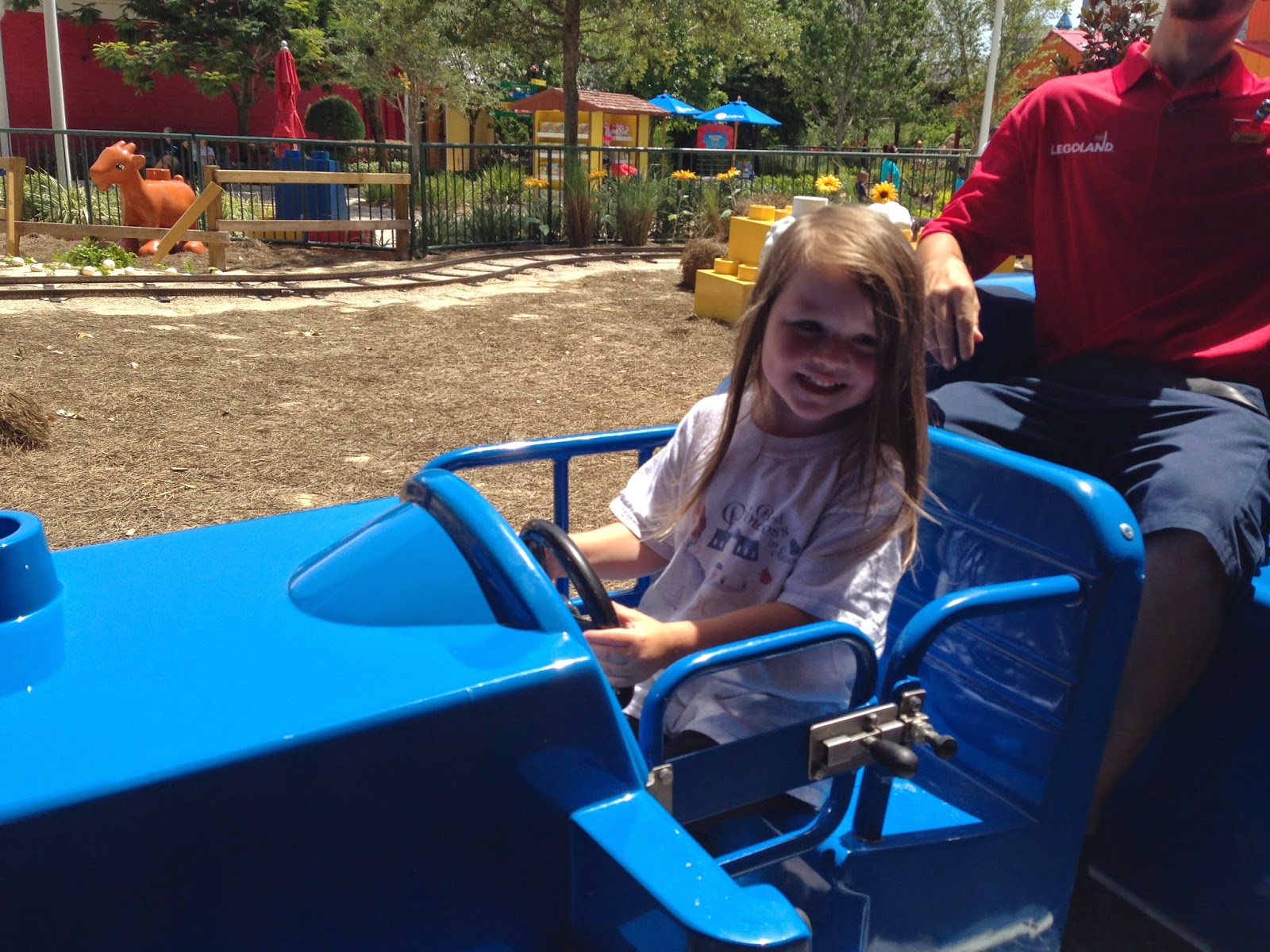 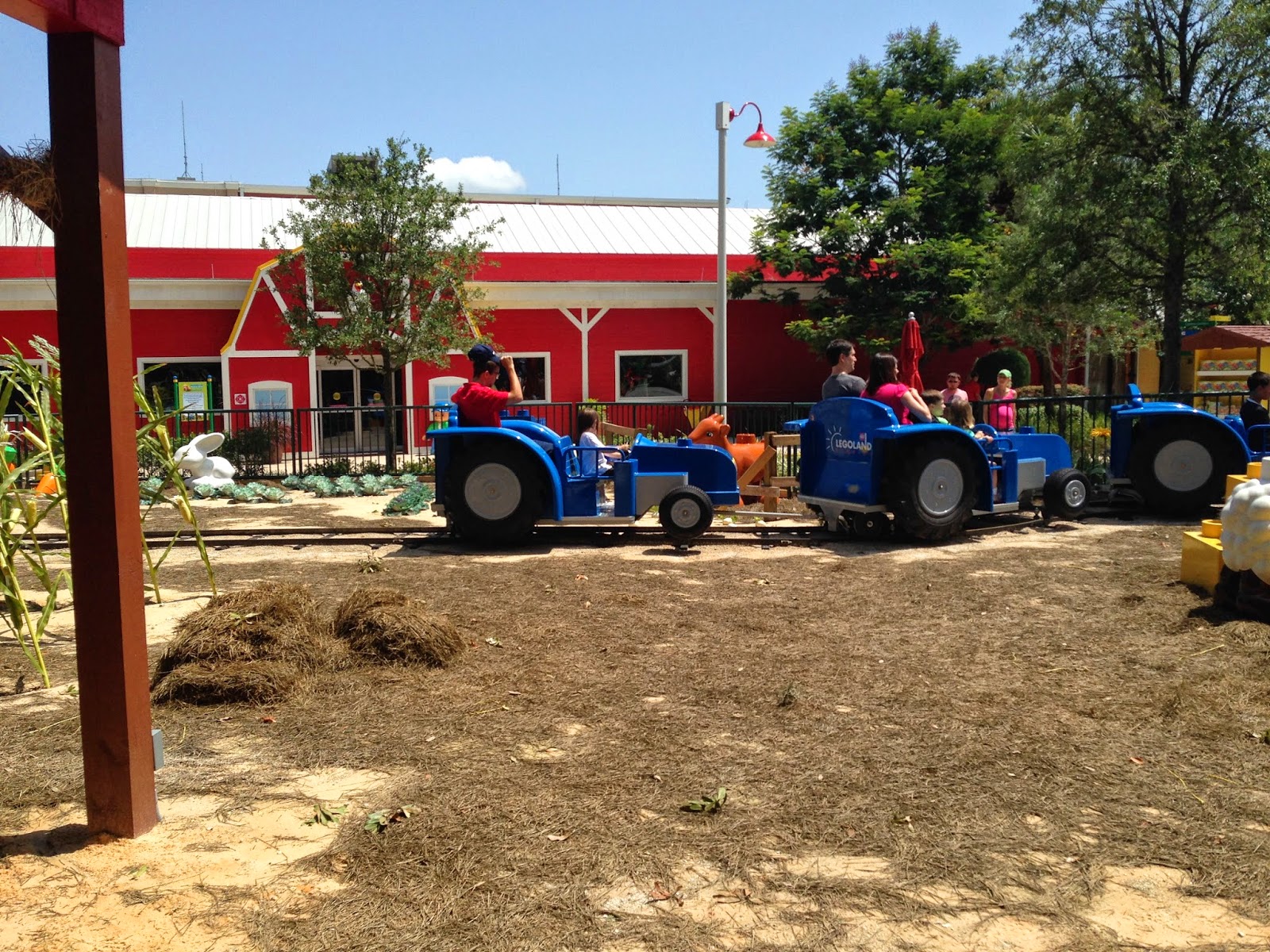 We all met back up at Castle Burger for lunch in the Kingdom area before heading to the Land of Adventure area.

The older girls loved the Pharoah's Revenge, where you fire foam balls at each other from air guns, and the Lost Kingdom Adventure which was an interactive laser ride in which each person tries to score as many points as possible. There also was another playground they ran all over. We watched in awe as Teresa got red-cheeked and slow but refused to succumb to her tiredness for a nap. 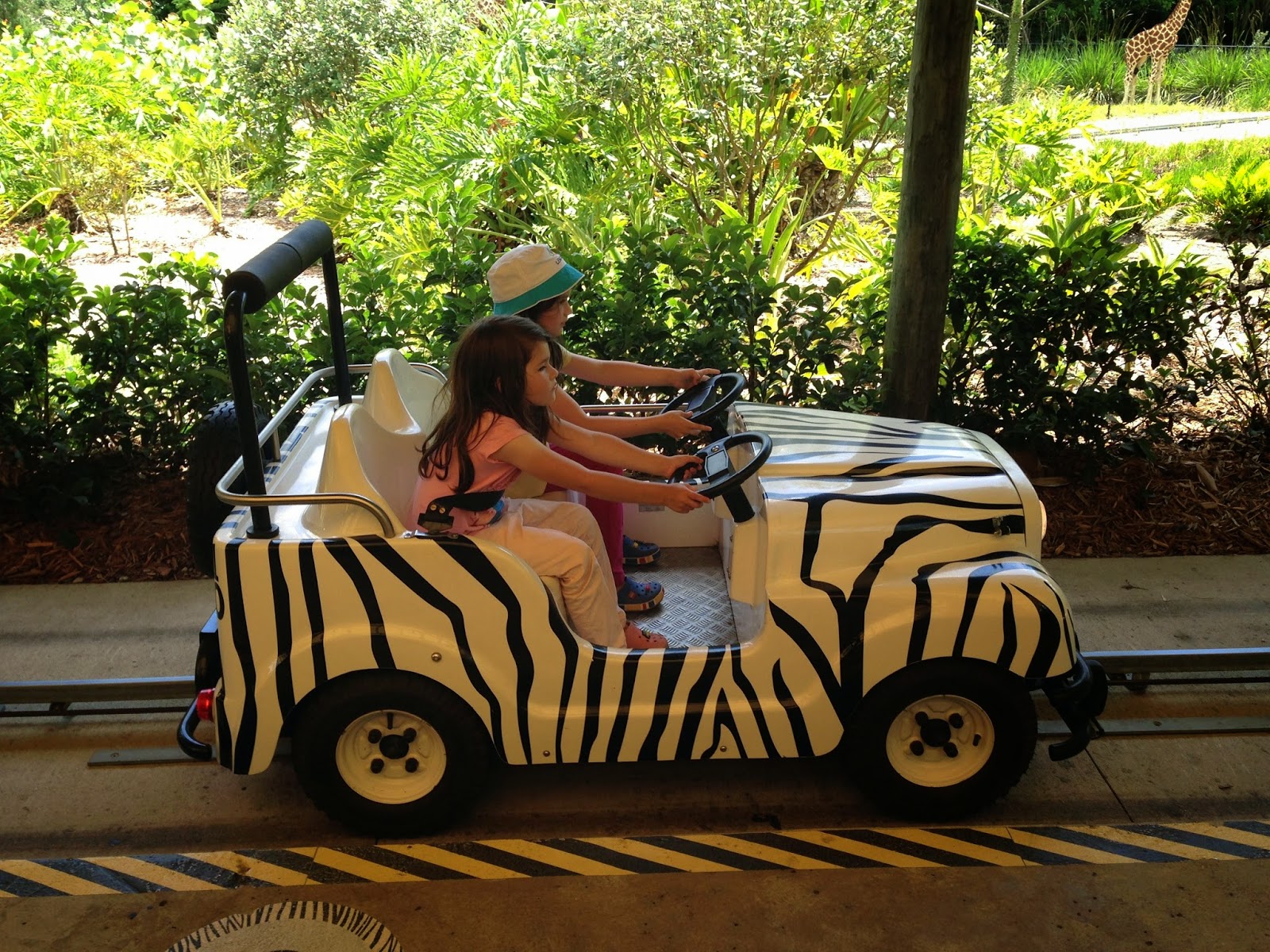 Since Cecilia is over 48 inches, she could ride as the "adult" with another child, which was a huge help. She took turns taking Elizabeth and Felicity. 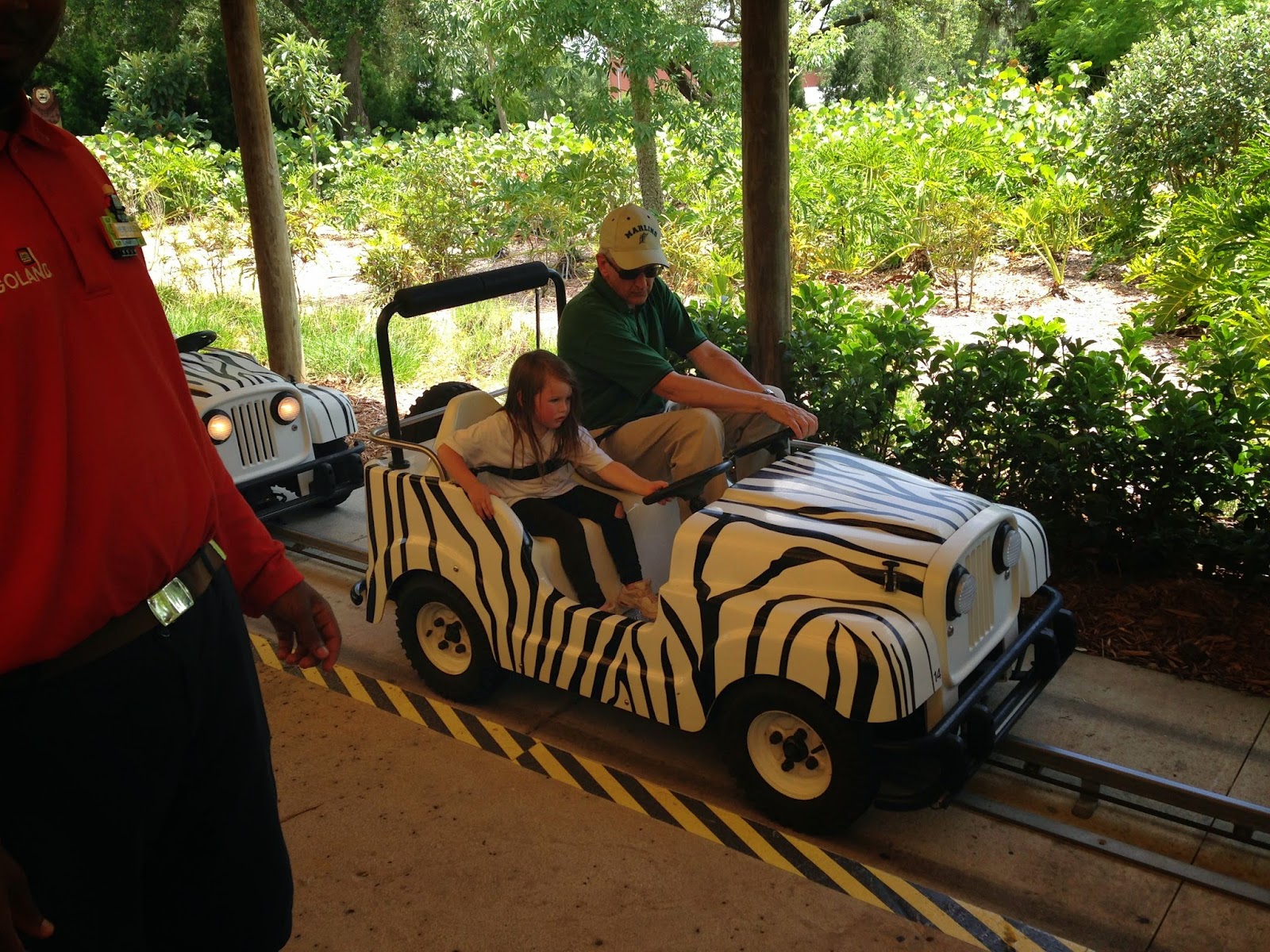 My dad often rode with Teresa since, well, we wouldn't trust her with someone who couldn't carry her. It was a cute safari ride though where you can see various safari animals made entirely of legos.

Finally we got to the Lego City part of the park. 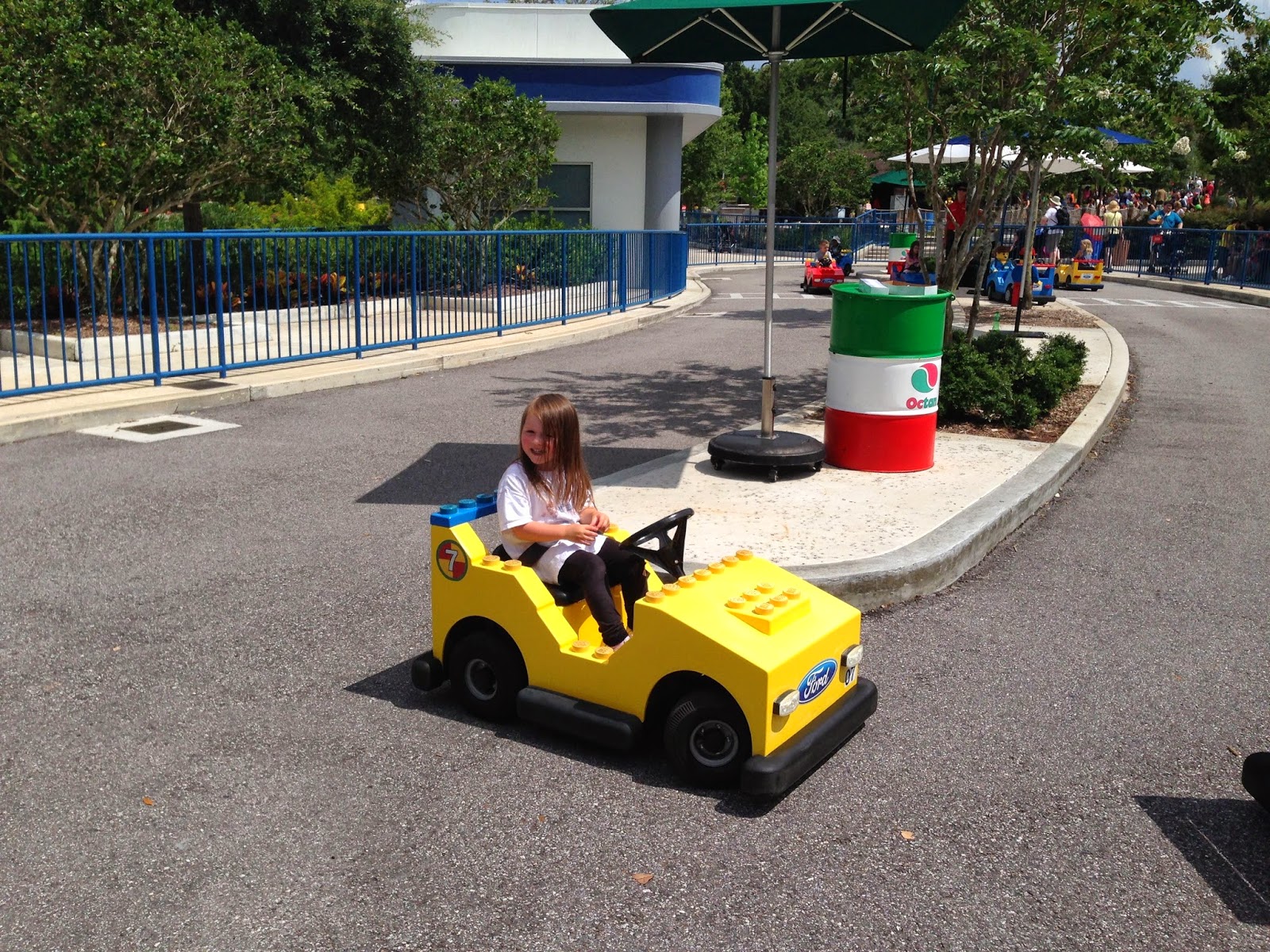 Elizabeth and Teresa went to the ages 3-5 Driving School. 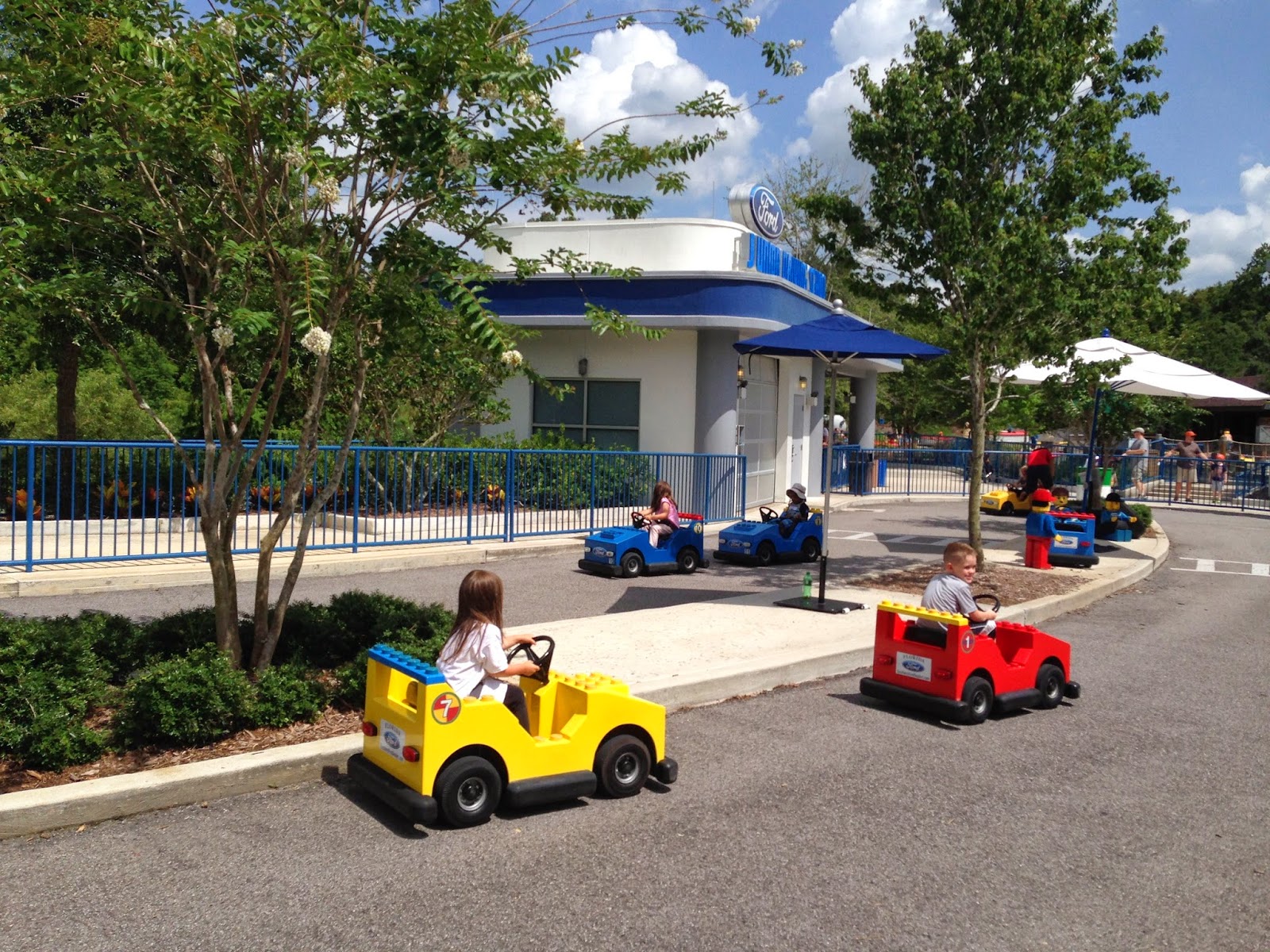 
No she will not be ready for a license for some time.

Cecilia and Felicity drove in the upper age driving school, so I don't have pictures of their driving skill or lack thereof, but they loved the licenses with their pictures on them they received.


We also tried out the Boating School, which turned out to be a bit challenging. Elizabeth and my boat was the last to leave the dock though as lightning was seen only so far away and being a water ride they shut it down immediately. We finished our boating through the course though.

Afterwards, we managed one more ride through the Rescue Academy (which was too much work I must say) and then began walking toward the exit. But as the dark clouds with their thunder and lightning began to chase us, Cecilia, particularly scared of lightning after it struck much too close for comfort while we were outside once, began speed walking with her hands over her ears for the parking lot. It was all I could do to keep up with her. So the 7 of us made a beeline bolt for the car and made it just as the rain began. If you know Florida thunderstorms and downpours, we made it just in time. It lasted about 45 minutes but it was good to be in the car for it and not easy to drive through either.

We had dinner at Olive Garden with leftover wedding cake as an early birthday celebration for my new sister-in-law before heading back to the hotel.

Posted by Katherine at 3:03 PM