Because Felicity was all caught up, she thought she didn't have to do any school this week. Silly girl. Scheduled Catch Up week isn't until next week and it is then I hope we will be able to catch up on Science and Music, both of which we fell behind on during the move.

It was a bit of a weird opposite day. While Felicity usually just plows through work and Cecilia procrastinates, this morning Cecilia got done her Handwriting, Geography, English and Spelling while Felicity did her Geography and struggled to finish her Phonics. Elizabeth got done about 6 pages in Math and then finished her Poem from last week. Opposite morning extended to the little ones as well as Teresa was surprisingly good, cheerful and out of trouble and Brigid was a supreme grump. Go figure.

The afternoon was spent trying to make sense out of the mess of my office/desk area and condense the 3 messy kitchen counters into one. By 4pm I was too tired and refused to move. But fortunately that is also when James got home to make a delicious spaghetti and meatball dinner with baguettes from Panera Bread. Mmmmm.
TUESDAY

Tuesday went pretty well. Brigid was still grumpy - getting up at 7 definitely doesn't agree with her, but Cecilia got a Vocabulary lesson, her Latin and her Typing done. Felicity got done her Latin and English. And Elizabeth got done her Spelling, English, Geography and a Reading lesson. Since Elizabeth still had more work to do at this point I spent more time with her this morning.

That afternoon I had my weekly checkup. When you are almost 36 weeks and measuring 37, they like to see how you are doing pretty frequently. Afterwards I worked on organizing and unpacking all of my homeschool books, papers, and supplies. I only got through 3 of the 4 boxes but progress is progress. 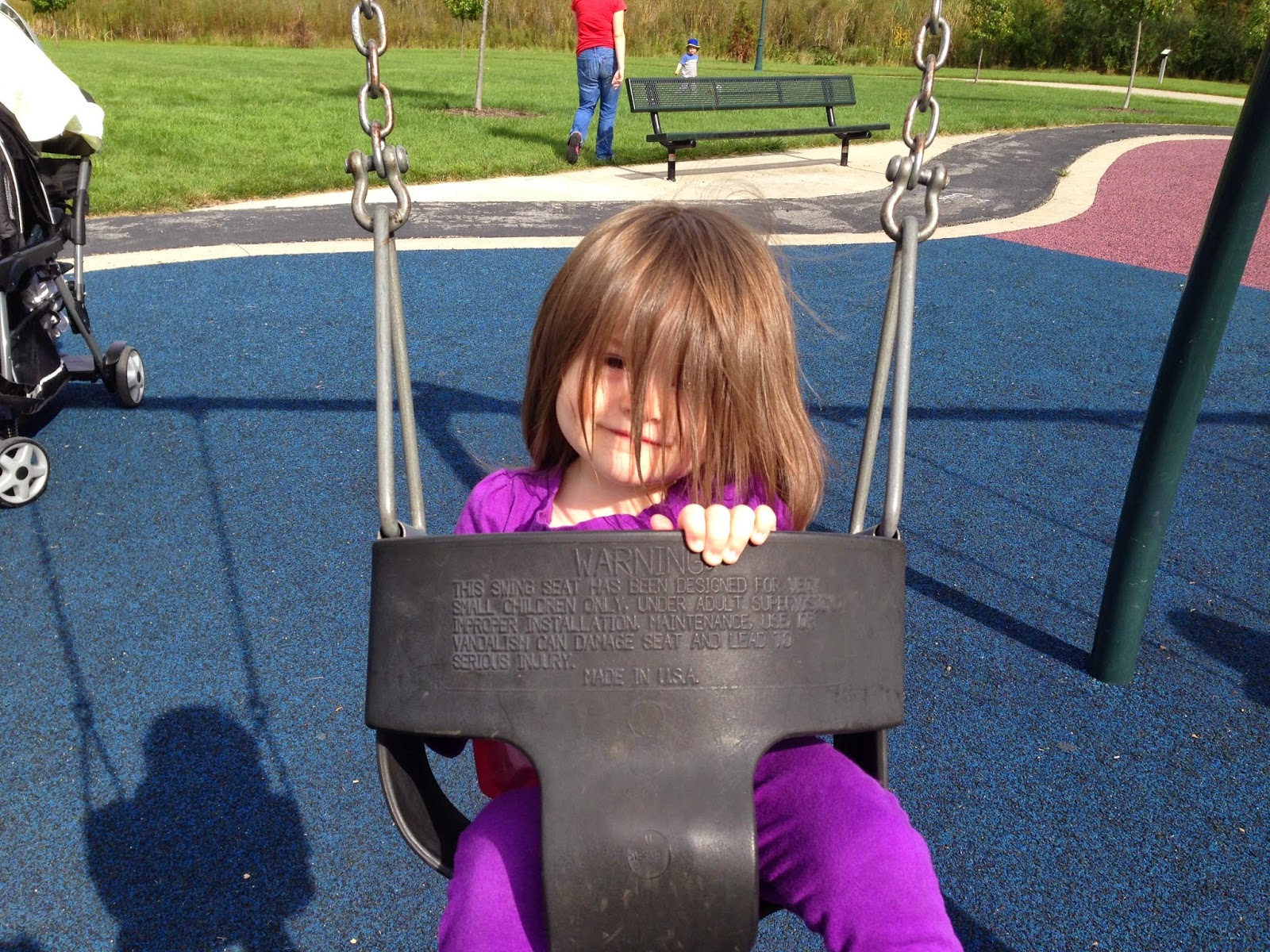 Wednesday we cancelled our morning school time in favor of a local playdate at a park with a great playground to meet some other Catholic families in the area. It was a bit warm and the bees were bothersome but the kids had fun and I got to chat with a few moms. One is moving soon to South Carolina. One moved here last November but is looking for a doctor as she is 9 weeks pregnant. Several homeschooled. Most had boys but there were a few other girls (we definitely helped balance it out!). We stayed about an hour and a half until Cecilia insisted she was going to faint or be sick without lunch, more water and shade and Teresa began wandering off twice. I really wanted to take them to Chick Fil-A for lunch but, alas, the only one outside of a mall and less than a 30 minute drive still hasn't opened yet. So we wound up at McDonalds.
After we got home and got Brigid down for a nap, Cecilia, Felicity and I did religion and began going over the story of Moses. The book, once again, divides the stories into two chapters but since I was losing the younger two by the end of the first chapter, I figured it was just as well to wait two weeks when we will get to the second chapter to finish the story.

Cecilia finished reading the second book in Lloyd Alexander's Prydain series and is now asking to watch Disney's The Black Cauldron. (We told her she couldn't watch it until she had read at least the first two books. It barely resembles anything of the books but the villain is particularly scary and having read his demise in the first book would help.)

Thursday Felicity finished all her school for the week, which included Poetry and 10 pages of Math. Cecilia got done a Vocabulary lesson and practiced Typing some more. Elizabeth finished her Math for the week and did her Poetry and two weeks worth of back Latin. Elizabeth has been a bit ahead in Handwriting and that is why she didn't need to do any this week. Same for Felicity.

I spent a couple of hours organizing my office space and finally getting all the remaining boxes out of it, homeschool books and supplies organized and everything off the floor. Although it isn't set up yet, I also got the bassinet/pack 'n play in there so Mr. Newby will be able to nap in my office on the main floor during the day while I'm doing school and I won't need to be running up and down stairs very much.
Cecilia spent the afternoon editing a movie she made on my iPad of Lego mini figures in which she sings, narrates and voice acts the entire thing. It is really rather impressive but I'm afraid it is far too long for me to put online. :(

Felicity spent most of the week reading a children's bible. She recapped every story in Genesis to me before plowing through many of the stories before telling me she had "read the whole bible."

I spent the afternoon cleaning off the kitchen counter. You know how you have that one table or counter where stuff just accumulates? Well, after moving in and trying to unpack and organize, we had three. I had condensed it to one, with a bit of overflow onto the second but, well, it was starting to drive me crazy, so I finally spent a few hours going through all of it resulting in this 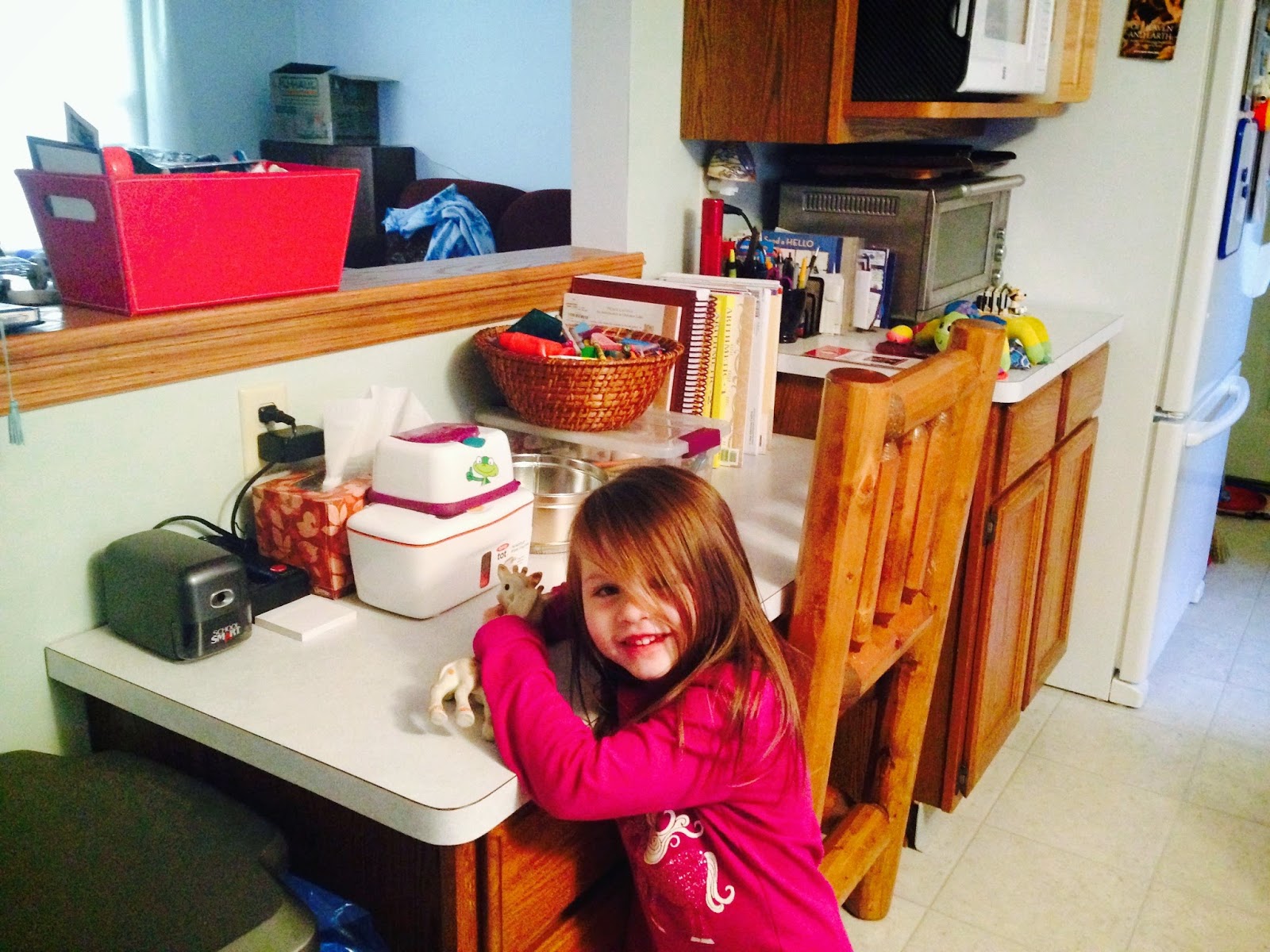 It was a vast improvement. School books, crayons, colored pencils, tissues, wipes and a pencil sharpener remained on a clean counter. All that remains to be gone through fits in the red container above. It is so nice to have a clean counter for our daily school supplies!

Happily this means that the main living level of the house it just about set and fully functional. All I have left to organize really, beside that red container, are the DVDs. Which, considering I'm now 36 weeks, is nice. I even got the bassinet in my office finished and ready for baby boy and all the newborn/0-3 month clothes ready as well.

Certainly a productive week. Next week is my scheduled Catch Up week, which will be nice and should be relatively easy-going. I will do Music and Science with all three girls since we are all behind on those and then Cecilia will catch up in her Math and Elizabeth in her Phonics and Reading Lessons.