I woke up at 12:30 this morning with a contraction I could sleep through. They continued in varying intervals and durations throughout the morning. My midwife checked me around 4am and I was 3cm. I was also dead tired. So I went home and tried to sleep some but I was so cold I was shivering despite sweatpants, a sweatshirt, slippers and two layers of duvet. A warm bath warmed me up and I was able to nap between contractions between 7am and 9am or so. James asked if I was okay enough for him to run to the store really quick and pick up pull-ups for Teresa. Everything had been so irregular, I said sure.

So, of course, at 9:27, while he was out, labor picked up with those whopper contractions that tell you if you are going anywhere, now is when you go. I texted James he needed to get home but he was stuck in a check out line. A few contractions later I had managed to get on my slippers and coat and make my way downstairs as James arrived home. Cecilia had asked to watch the birth and I had said it might be okay but I think I scared her when she asked if she could come and James asked me and I replied, "I don't care but we are leaving NOW!" Oops. I wasn't trying to scare her... I just couldn't deal with anything but getting to the birth center. I could already tell he was very low and putting a lot of pressure on me. My water hadn't broken as far as I could tell but it felt like it might have and, as with Teresa, he was simply so low he was blocking all the water. And focusing on anything else was simply more than I could handle. Cecilia, seeing my reaction, opted to stay home although she went to my office and got the iPad and continued to text James over the next couple of hours asking about me and her brother.

God bless the birthing center, when I arrived around 10am they already had a tub ready with warm water. All the vitals were fine and I was right how close he was. He was born at 10:27am and I couldn't believe how big he looked after how surprised I was by how small Brigid had been at the previous birth. 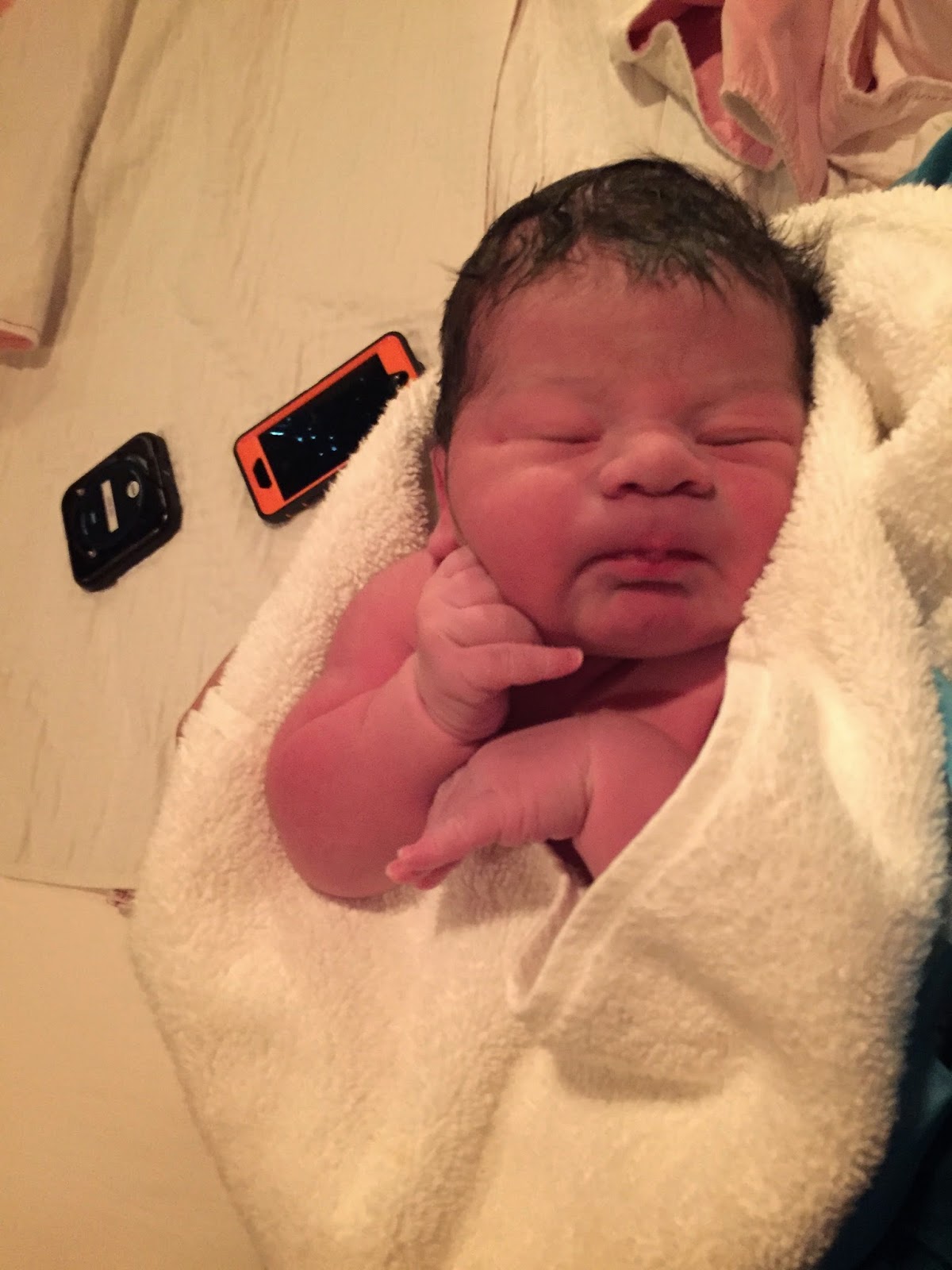 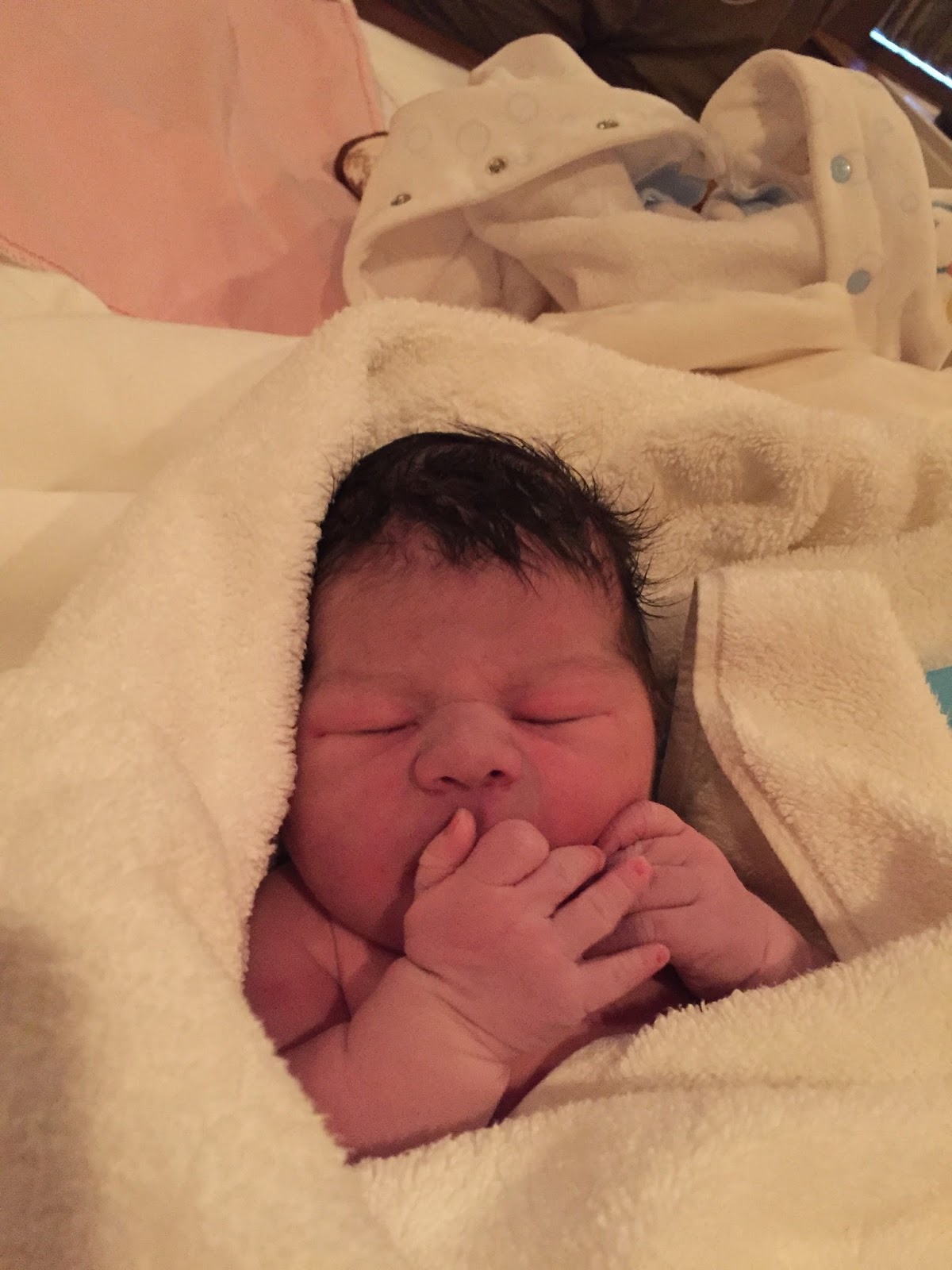 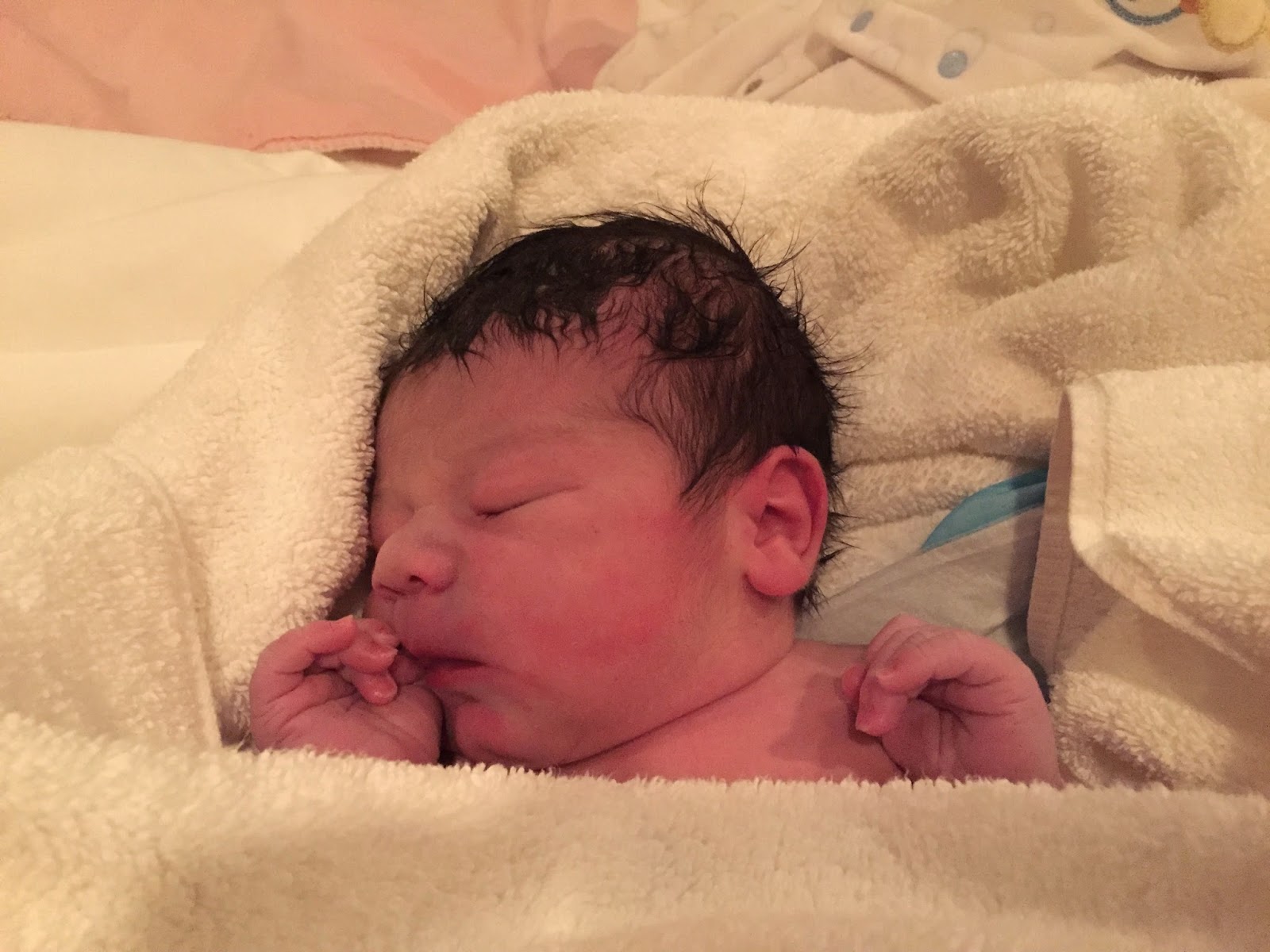 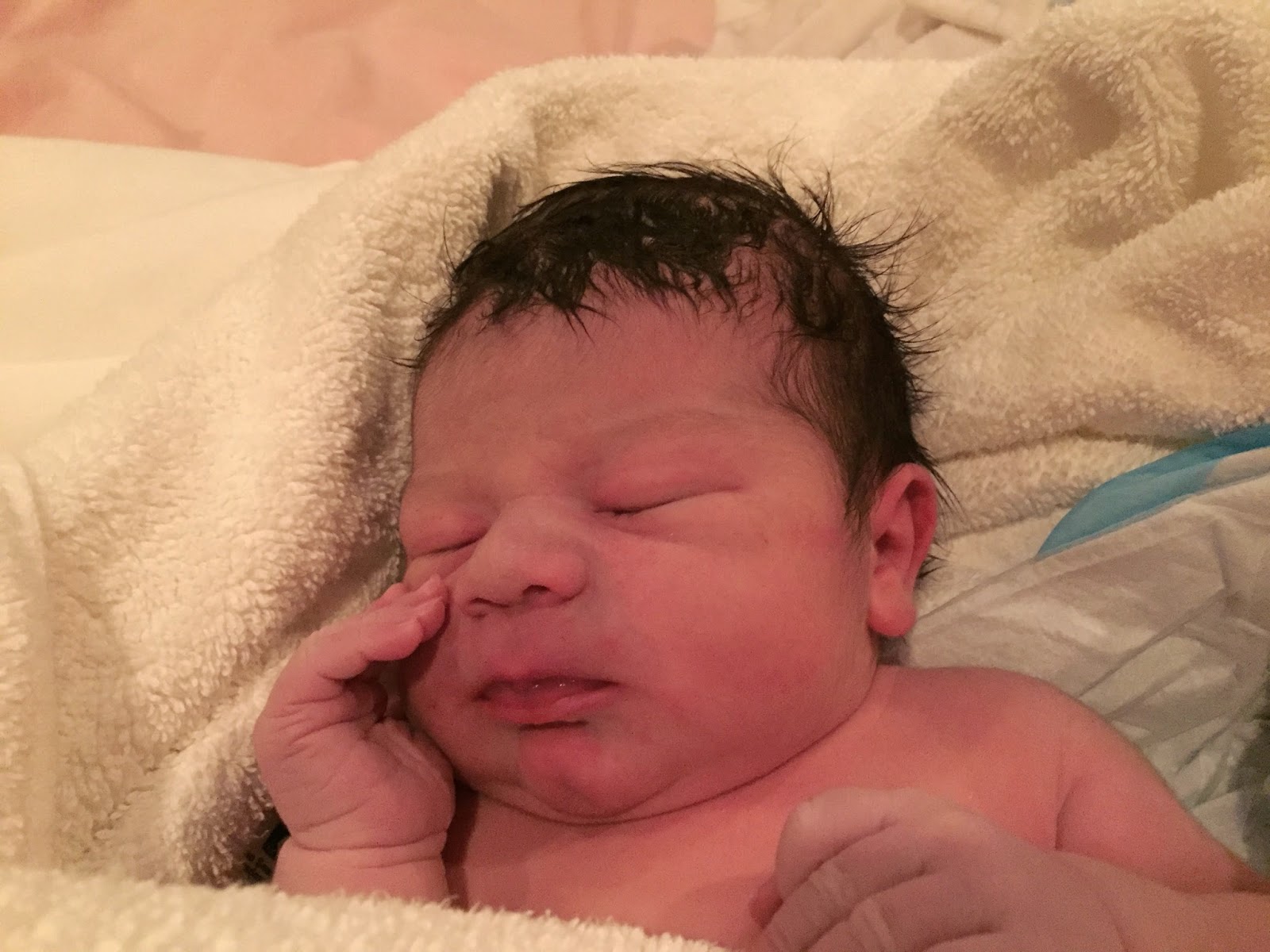 The previous Tuesday, the midwife had guessed he was right around 8 pounds. I had known for a few weeks that he would not be our smallest baby, which was Felicity at 6 pounds even, but I didn't know if he would beat Teresa's 8 pounds, 5 ounces. He set the record though at 9 pounds even and measured 21 inches. That explained so much from how he could squish my bladder so well while pushing on my ribs to how he had been bruising me from the inside. 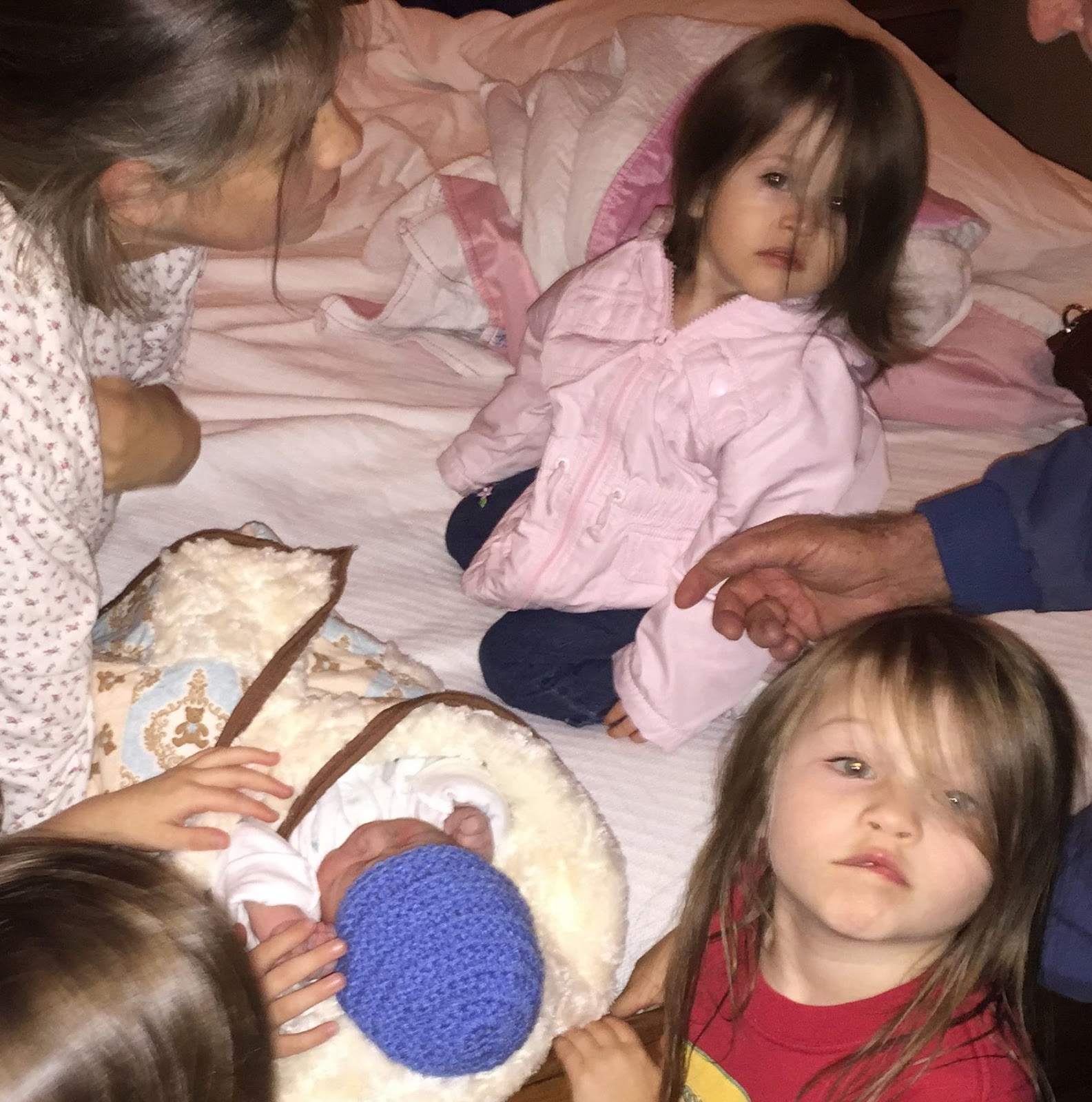 James ran home to get the girls and his parents so they could all meet Thomas. Brigid seemed very confused at first but I think it might have been more wondering where I had been all morning than why she was there. Before she left she was ecstatic over her new baby. She adores babies, so Thomas' timing is perfect for her. 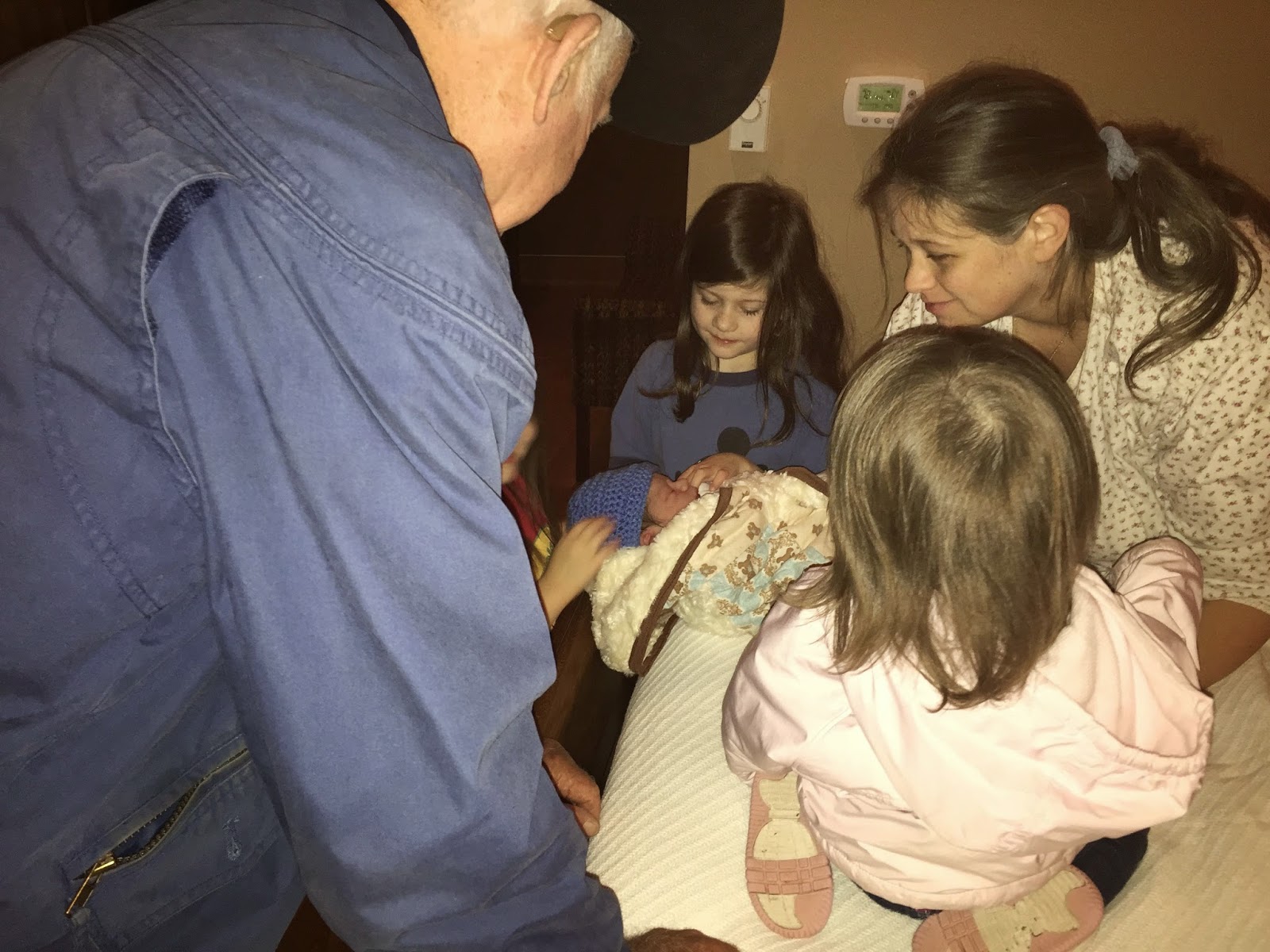 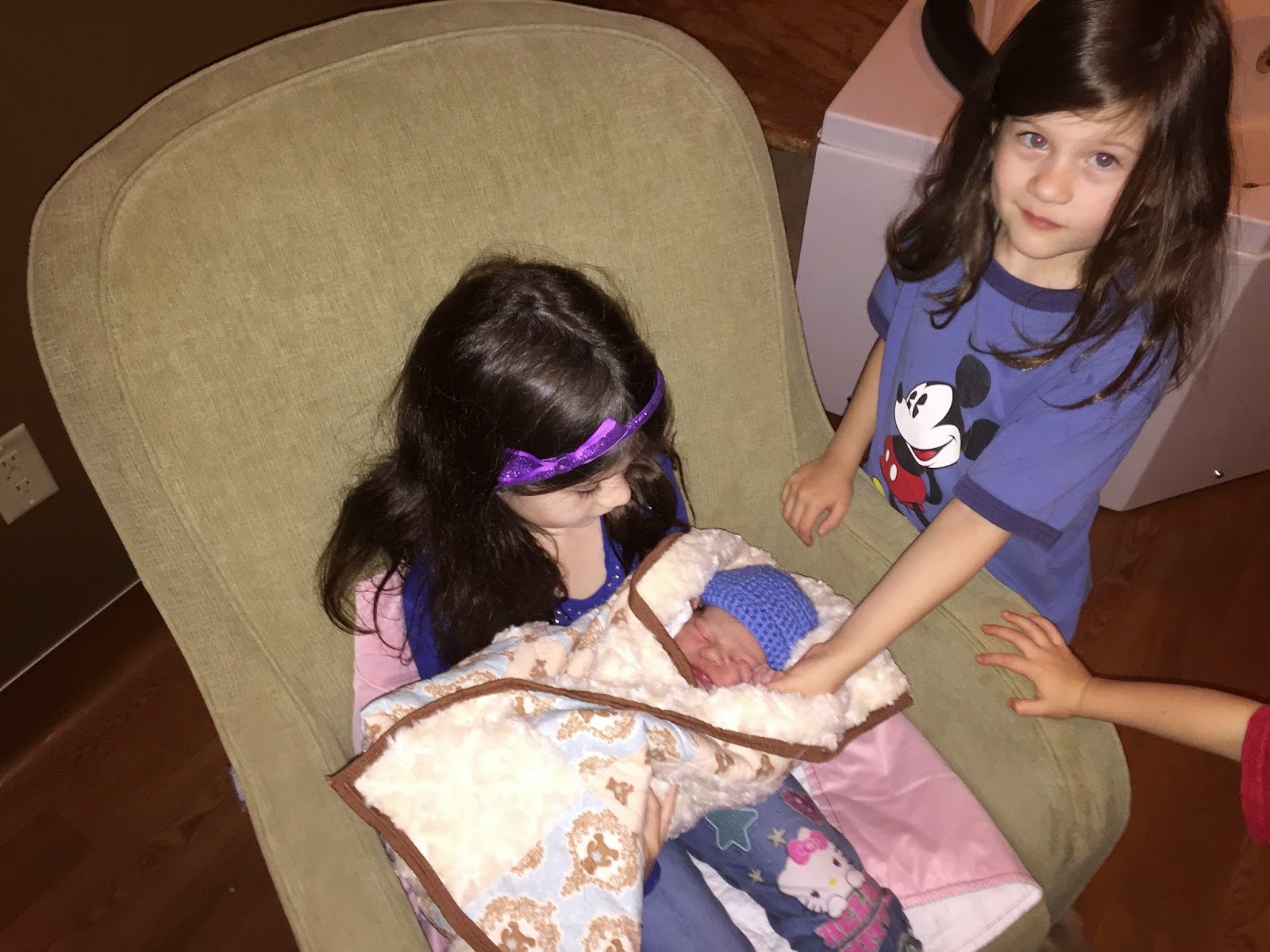 Cecilia had been so excited when she knew her brother was coming she couldn't eat lunch. She was dying to see him and hold him. She kind of regretted not coming but honestly everything happened so quickly once we got there, it might have been just as well. She was the first sister to hold him and didn't want to leave without him even though we hadn't brought his car seat with us yet. 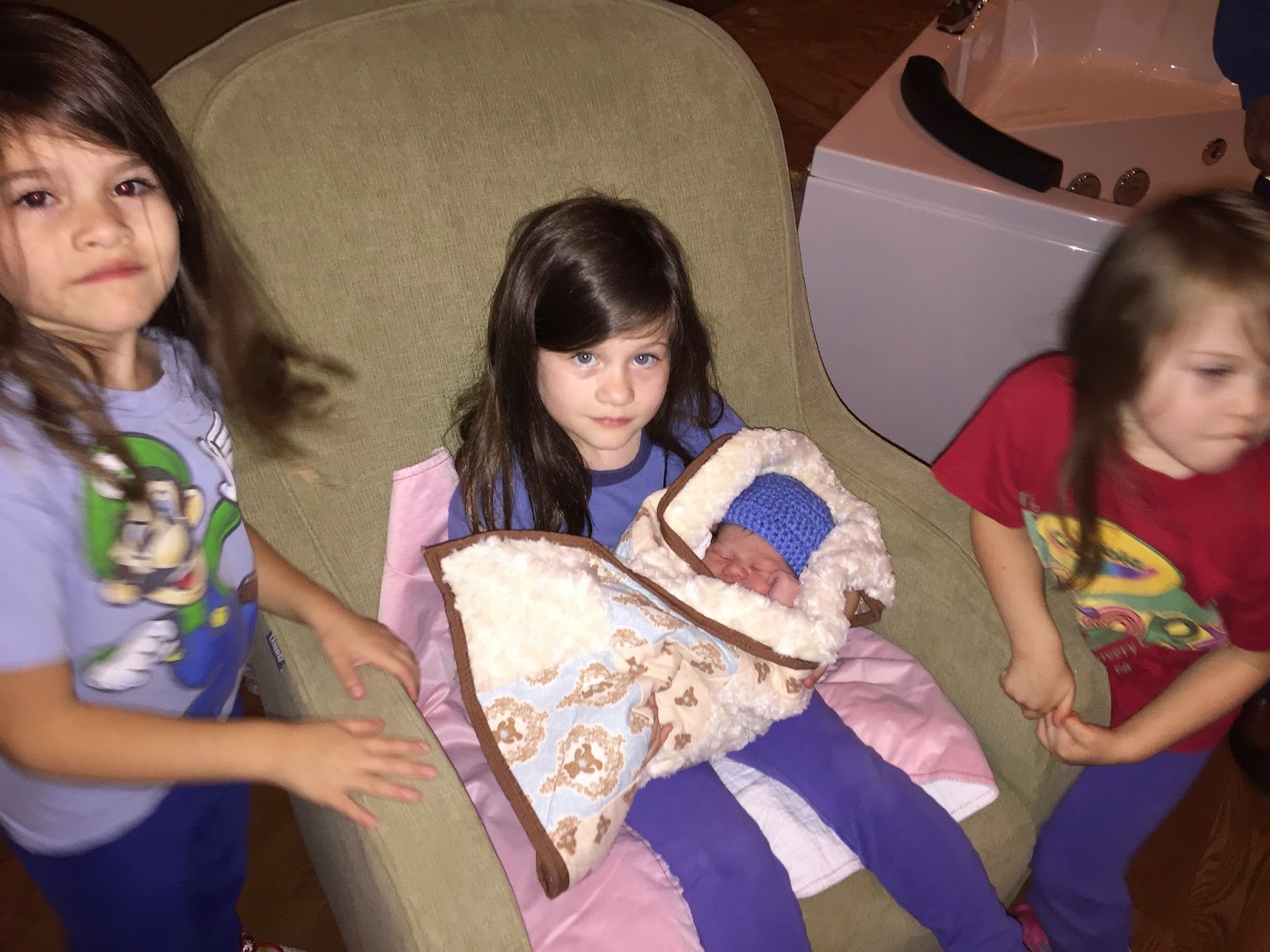 Felicity has long been my mommy-want-to-be and lover of all things babies, so she was quite the competitor with Cecilia for time to hold him. 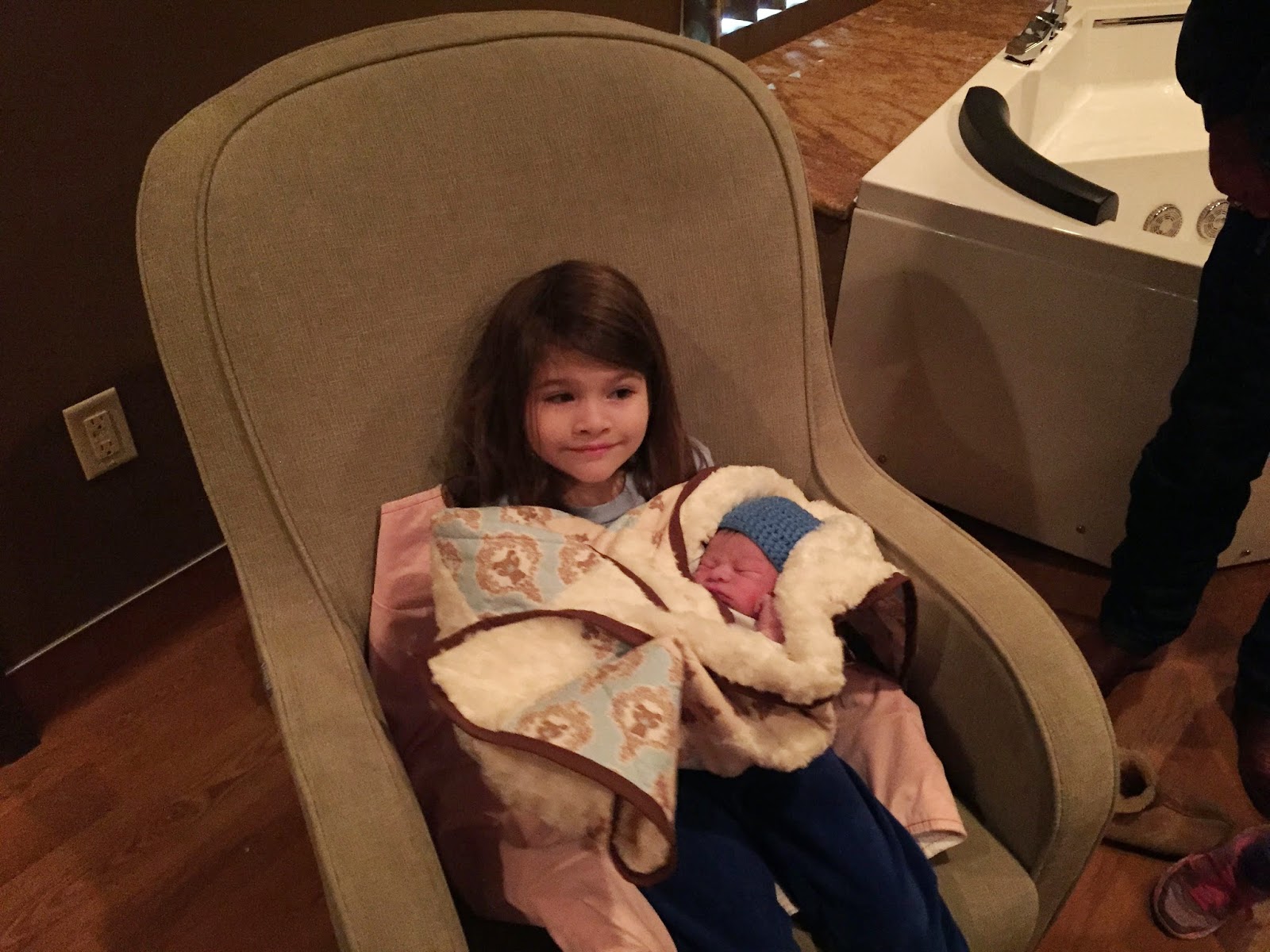 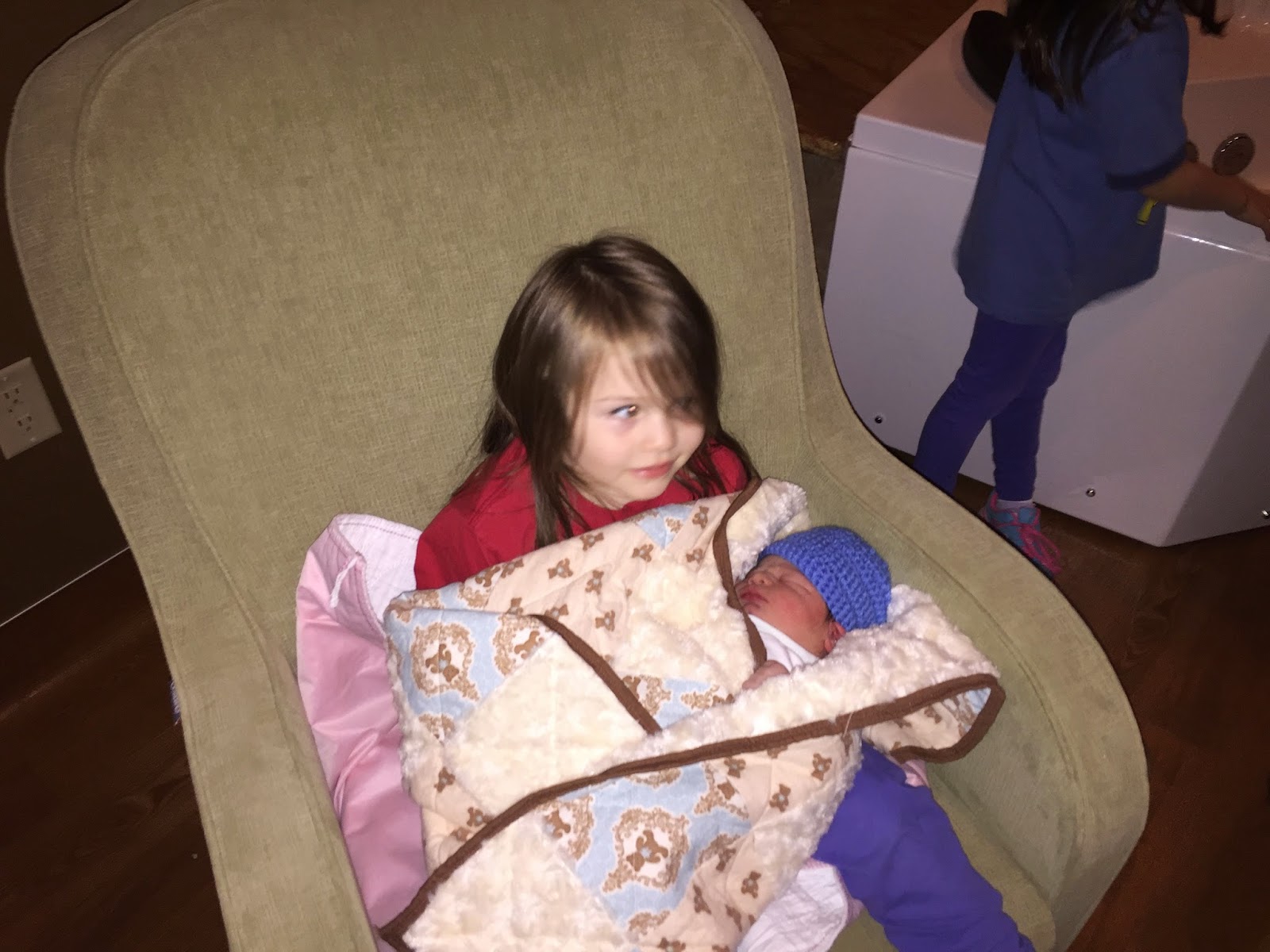 Teresa insisted on a turn and insists he is "her baby." 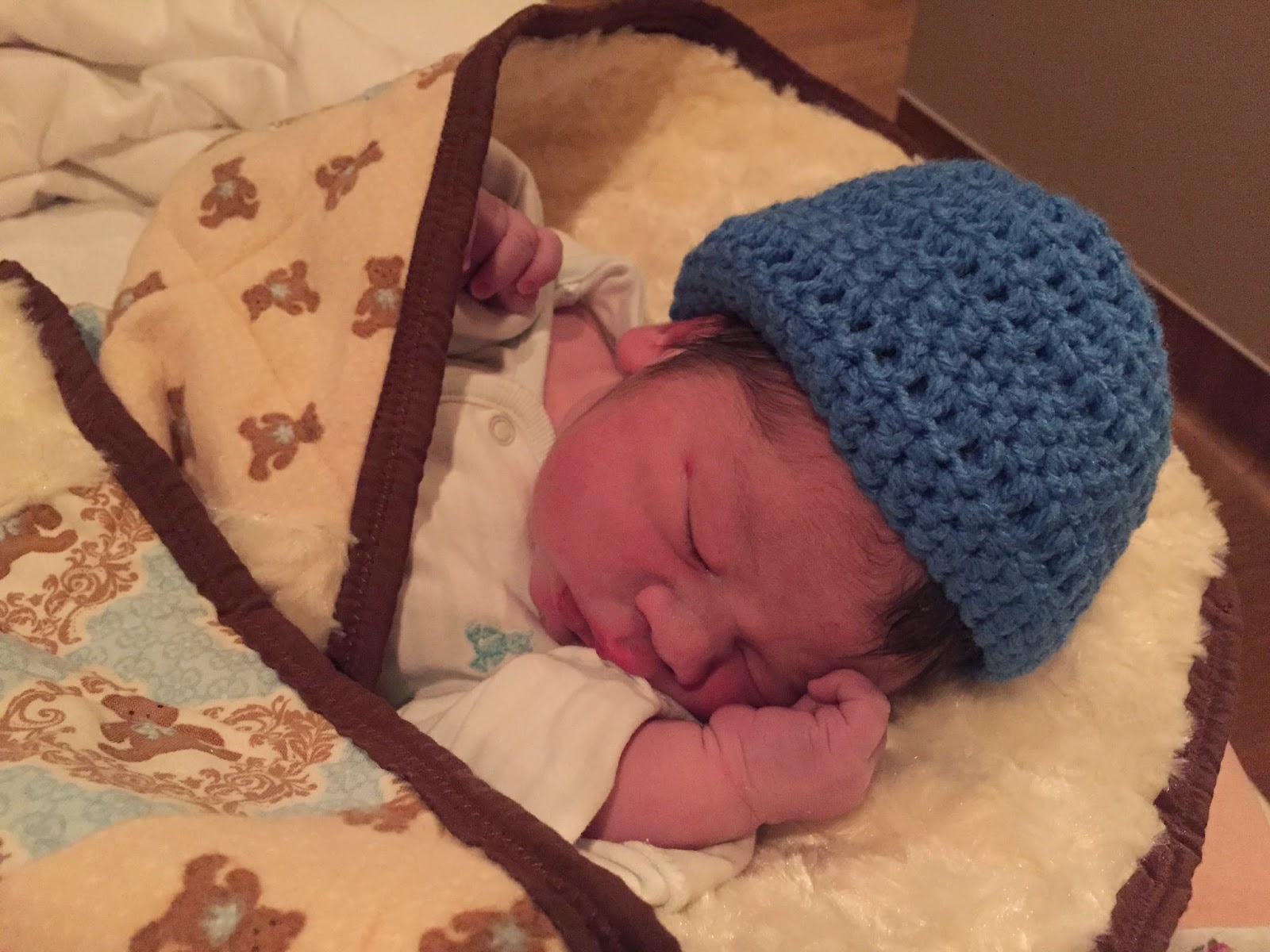 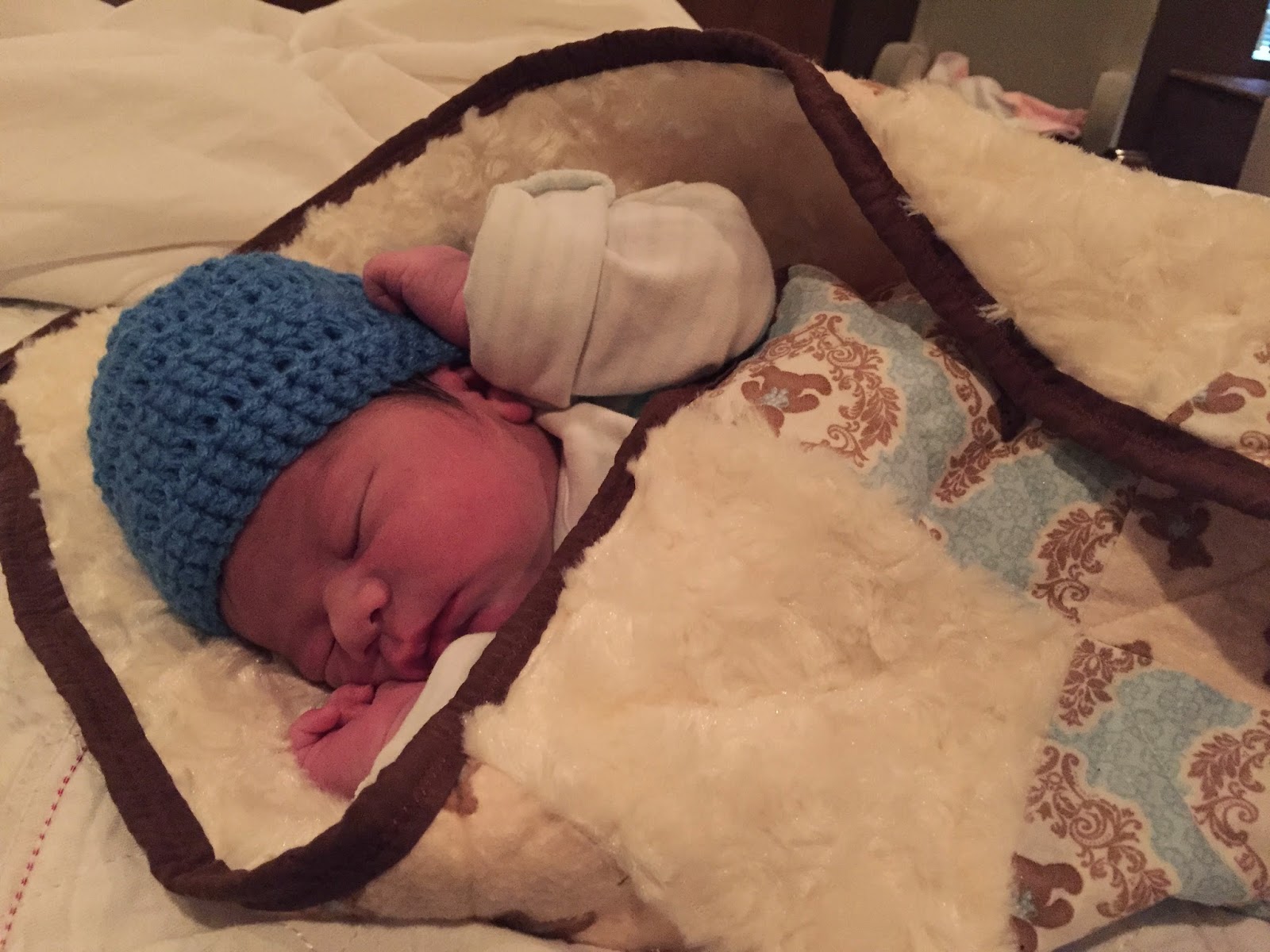 Posted by Katherine at 7:25 PM